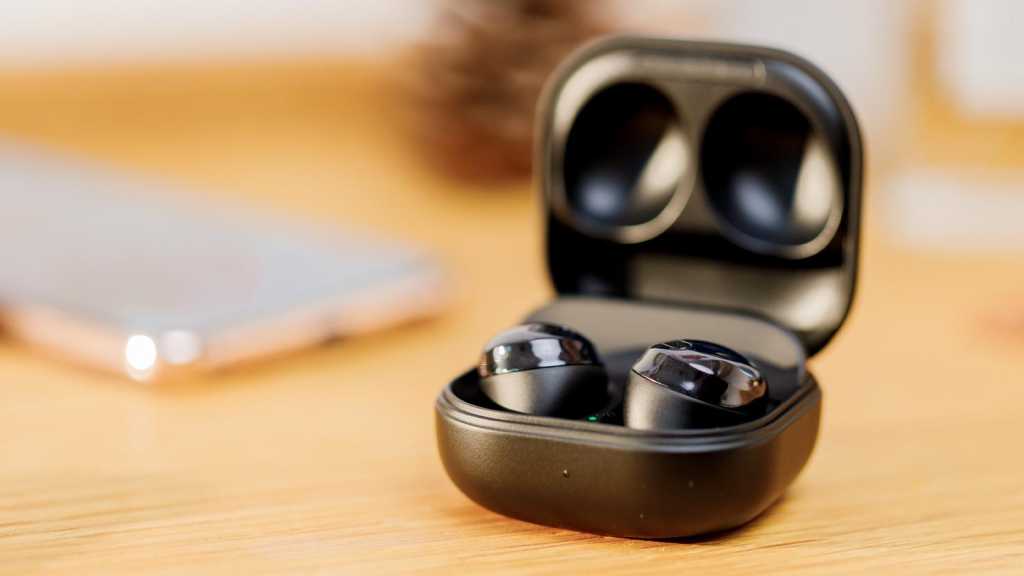 The Galaxy Buds Pro are a premium package, with a decent fit combined with top-notch sound, active noise-cancellation, and smart features that make that ANC seamless to use.

Samsung’s fourth pair of Galaxy Buds are the best yet, pairing the in-ear design of the Galaxy Buds+ with the active noise-cancelling of the Buds Live to great effect.

More than that though, they’re Samsung’s attempt to match Apple’s AirPods Pro. Not on brute specs or sound quality – though they’re more than a match there – but by tying together Samsung’s ecosystem in a pair of headphones that’s designed first and foremost for Samsung phones. 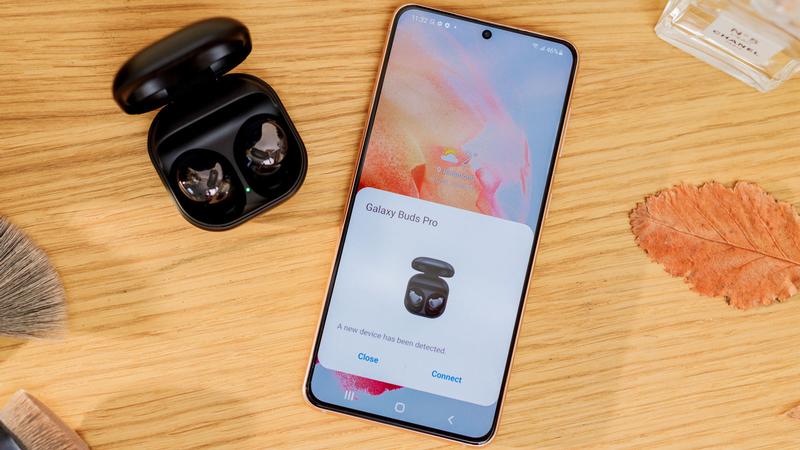 That means the Galaxy Buds Pro are at their best if you’re pairing them with a recent Galaxy phone – though they’re still a pretty compelling choice on other Android devices, though iOS users will find less to love.

I said above that the Buds Pro borrow the design of the Buds+, but really that’s only half-true. Like those headphones (which themselves took after the original Galaxy Buds) these are small headphones with silicone tips and a rounded, glossy finish – available in silver, black, or violet.

The shape is their own though, and the design here has been tweaked from previous Buds – not always for the better. The body is larger than on previous models, and lacks a silicone fin on the top to hold the headphones in place. Combined, it means that the Buds Pro seem to press against my ears more than most headphones, and have a slight tendency to work themselves loose over time, as their weight isn’t well-balanced. 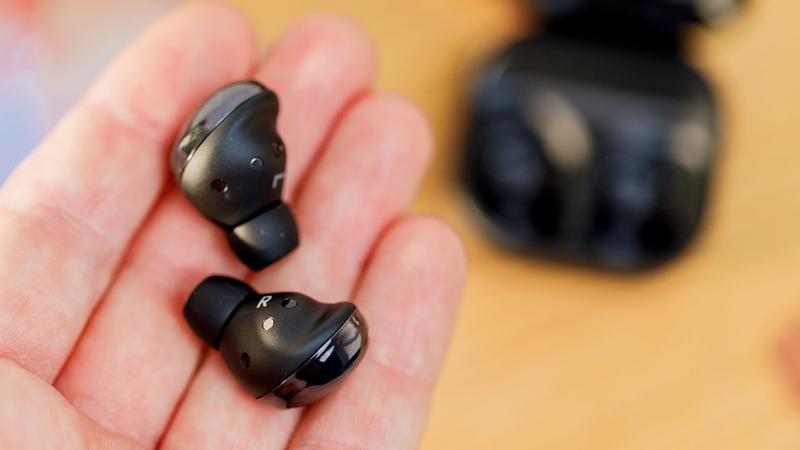 Their bulk does at least help create a good noise seal (unlike on the bean-shaped Buds Live), while the IPX7 waterproof rating is among the toughest yet in true wireless earbuds, making these a great choice for exercising so long as you can get past the worry that they might fall out.

The Buds Pro ship with a compact, square carry case that remains one of the smallest and most practical I’ve found yet for true wireless buds – perfect for throwing into a pocket or bag without getting in the way.

That compactness is also the biggest strength of the design of the headphones themselves. They may be bigger than Samsung’s previous efforts, but they remain dinky by true wireless standards, and sit snugly in the ear with no bits that dangle or protrude to get caught on bag straps, hair ties, or anything else.

Like previous Galaxy Buds, these are emblazoned with both the logos of Samsung and audio brand AKG – itself a Samsung subsidiary. That audio expertise has helped recent Samsung headphones punch above their weight, and that continues here, in a pair of headphones that really do feel like an evolution of what’s come before.

The audio profile is broad and balanced, neutral enough to suit most tastes – though the accompanying app includes a few pre-set equalizer options if you want to tweak to your taste.

Samsung has managed to squeeze a two-way speaker setup into each bud, with an 11mm woofer backed up by a 6mm tweeter. They deliver enough bass to cut through the mix in Marvin Gaye or drive a Caribou track forwards, without compromising on mids or trebles or letting it all run together into a muddy mush in the middle of the spectrum.

At times the sound stage feels a little cramped – these have none of the open sonics of the Buds Live – but there’s enough space to place specific instruments, and the end result is nothing if not immersive. 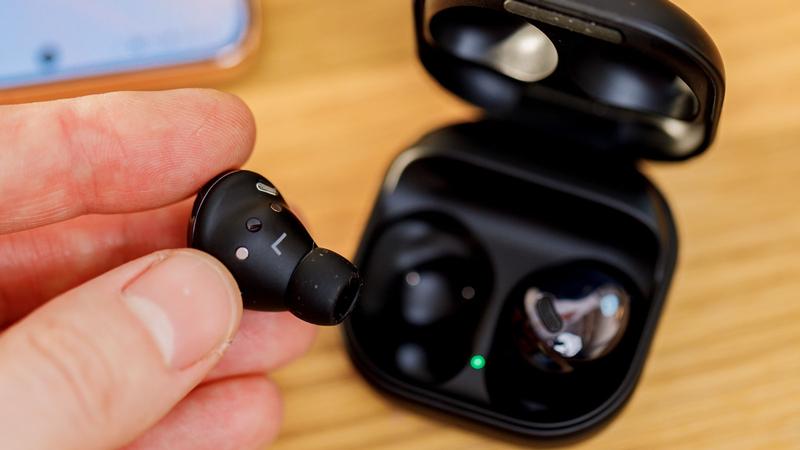 It helps of course that Samsung has brought back the active noise cancelling from the Buds Live, and together with the tight fit of the buds themselves the result is the best noise cancellation I’ve personally tested on earbuds, blocking out almost everything around you. There’s also the option of an ambient mode, which amplifies external noise to help you hear the outside world when you need to.

All of this is controller via the Galaxy Wear app, or through the limited on-device controls.

Let’s cover those first. The glossy outer side of each bud is touch-sensitive. You can tap for play/pause (which also triggers if you take either bud out of your ear) or touch and hold on either to trigger a customisable control: switch between ANC and ambient mode; activate your voice assistant; change volume; or trigger an automatic Spotify playlist. 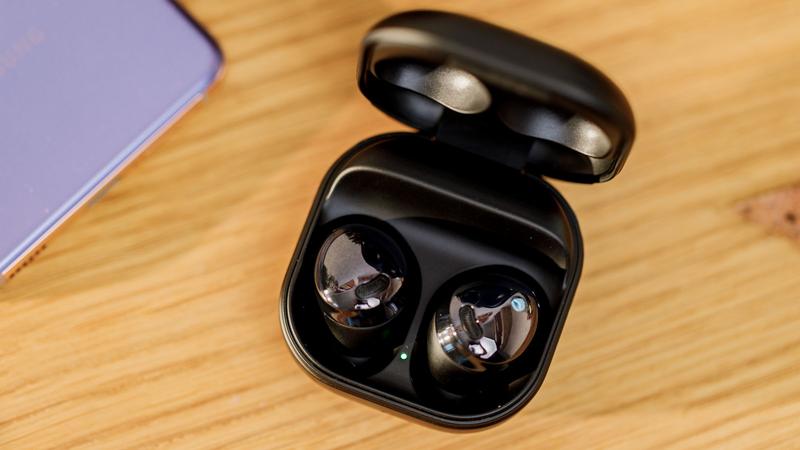 The main downside is that controls are a little too sensitive, and thanks to the small size of the buds there’s not much surface area that isn’t a touchpad. It’s not a constant problem, but it does mean that any time you want to adjust the fit – or even just fiddle about a bit while you put the buds in – you’re liable to pause, play, or trigger the Google Assistant when you don’t mean to.

Now for the app. This is available on both Android and iOS, but the iPhone version hasn’t been updated to include the Buds Pro yet – so Apple users will still miss out on a few features.

On Android, the app lets you customise the level of the noise-cancelling and ambient modes, tweak controls, change the EQ, and turn on or off ‘Voice detect’. 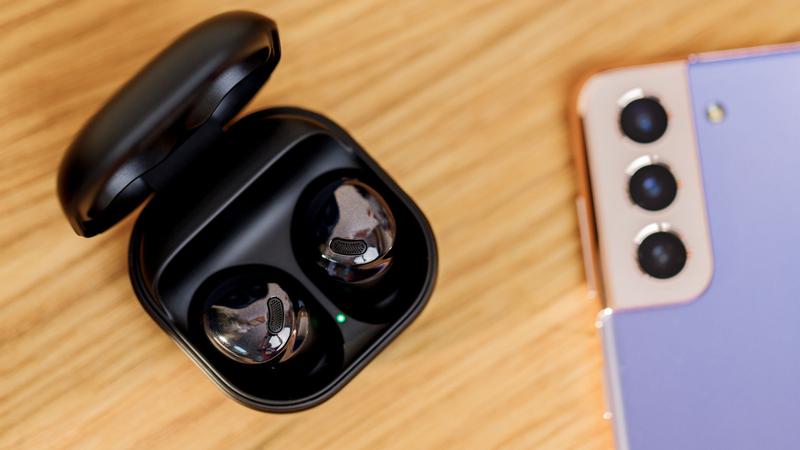 This is perhaps the Buds Pro’s secret weapon, as Samsung presents the best iteration of this tech thus far. It turns on ambient mode and lowers music volume when it detects your voice – but not other people’s – making it possible to have a conversation without running the risk of ruining your audio just because someone near you on the bus is talking too loudly.

Sound settings revert after 10 seconds without hearing your voice, which is enough time to stay active during a conversation without being too annoying once it’s done and you want your music back. One oddity is that since it’s triggered by your voice it won’t kick in if someone tries to talk to you, so the first thing you say might still be asking someone to repeat themselves, but it does at least save you from fumbling to pause every time you hit the supermarket checkout.

I’ve already mentioned that none of the app support is available on iPhone, but frustratingly some of the Buds Pro’s best features are also exclusive to Samsung devices – and recent ones too, as they’ll need to be running OneUI 3.1. 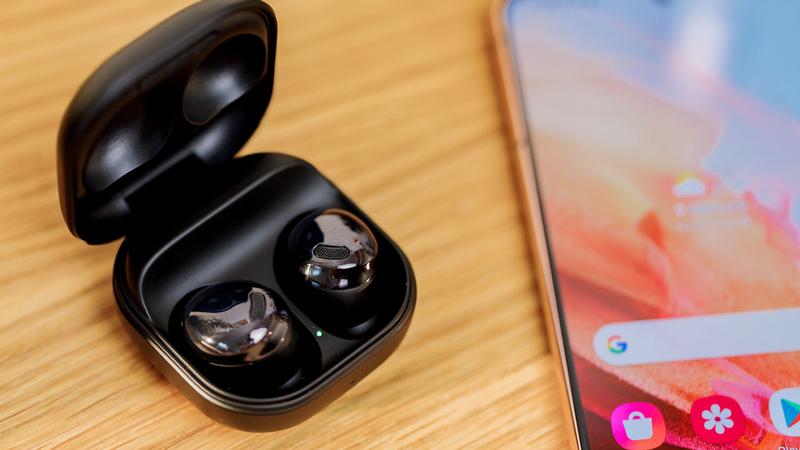 If your phone is compatible, that will unlock 360 audio driven by Dolby, intelligent switching between devices (though they’ll all need to be Samsung, so you’d better be invested in that ecosystem), the option to simultaneously pair two pairs Buds Pro, and the option to use the SmartThings app to find them if they go missing. You’ll also get voice-controlled access to Bixby, but none of us want that anyway.

These features may be enough to tip the Buds Pro from good to great for many users, and they’re clearly aimed at replicating the smooth, frictionless experience Apple provides with AirPods. Still, the Buds Pro hold their own even without these extras – I’ve been testing with a non-Samsung Android phone (ignore the photos – that S21 went to someone else to review!) and I remain largely impressed.

Samsung has once again delivered solid battery life here, though can’t quite match the lofty highs of the Buds+’s 11 hours of playtime.

Instead, you’ll get five hours of use between charges, give or take, which goes up to eight if you turn off ANC (though you probably won’t). The case delivers a little over twice that again, for roughly 18 hours total with ANC, and 28 hours without.

I haven’t managed to test every single one of those numbers, but in my experience it’s pretty close – using ANC on high I can get through most of a workday, but not quite all the way, and I’ve only felt the need to top the case up every few days. 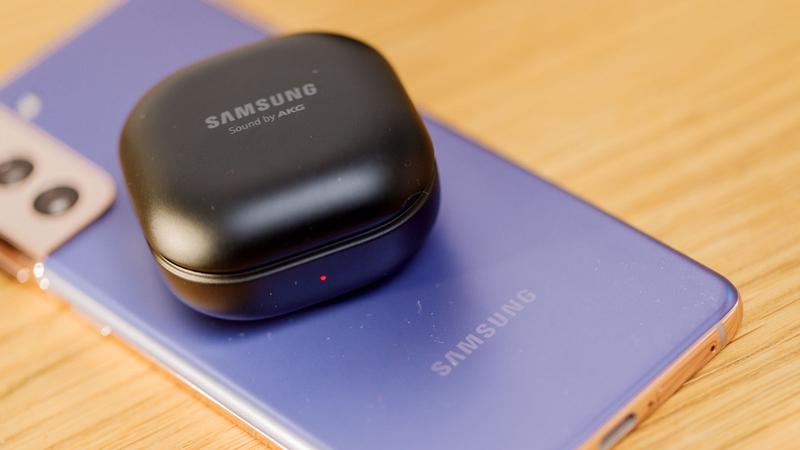 It helps that in addition to USB-C charging, Qi wireless charging is once again included – a welcome extra convenience if you already own charging pads, or have a phone that supports reverse wireless charging.

£200/$200 is about what you’ll end up paying anywhere for good ANC earbuds, and in fact Samsung’s are cheaper than the closest comparable rivals from Sony and Bose too.

Check out our full true wireless chart for more options if you’re not convinced.

The Galaxy Buds Pro are a premium package, with a decent – if not quite perfect – fit combined with top-notch sound, active noise-cancellation, and smart features that make that ANC seamless to use.

It’s a shame that some of the best features are for Samsung users only, and even more so that at the time of writing the iPhone app doesn’t support the new buds at all, but there’s still enough on offer to make these a compelling choice for Android – and probably the best noise-cancelling true wireless buds on the market right now.