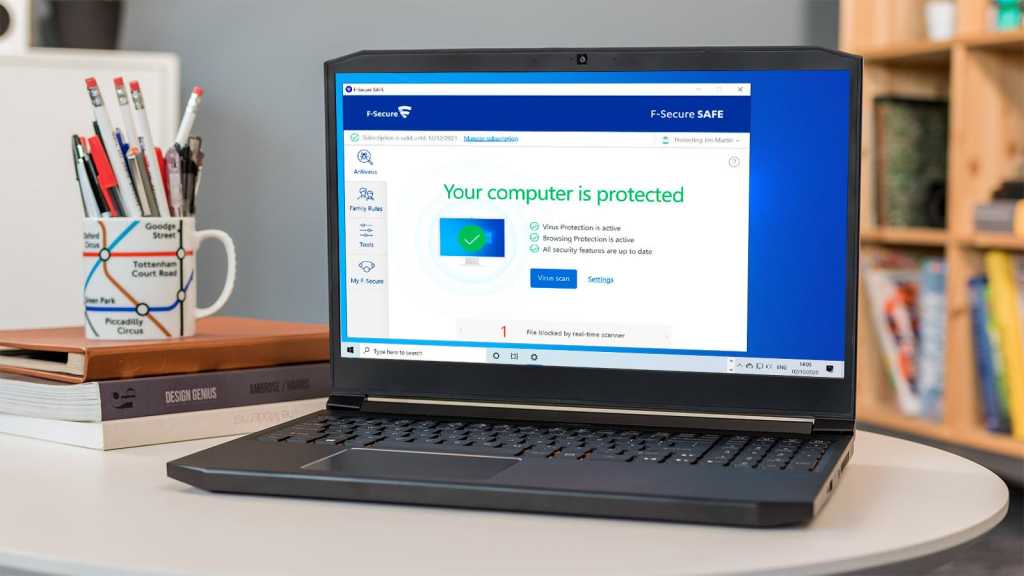 A beginner-friendly interface but also a lack of features and imperfect malware protection.

F-Secure is a Finnish security company that has been around for 30 years. We last looked at its antivirus software a couple of years ago and weren’t overly impressed.

Since then, it has made various improvements and tweaks here and there but it’s not really much different overall.

Before we dive in, it’s worth knowing that SAFE is the ‘medium’ option from F-Secure. Anti-Virus is cheaper and offers basic protection, with SAFE adding extra layers including URL filtering (to protect you from visiting dangerous websites), basic parental controls and apps for Android, iOS and macOS.

The top offering is F-Secure TOTAL, which bundles the separate VPN (Freedome) and ID protection services (including a password manager) onto SAFE. Scroll down to find out how much they cost.

We’re focusing on SAFE in this review.

Starting with the positives, the interface is friendly and easy to understand. Once you’ve enabled the Chrome extension, you’ll see three green ticks which reassure you that your computer is protected.

There’s also a prominent button to run a quick scan for viruses, and a Settings link. A full scan can only be run in the settings, where you can also schedule a regular full scan time.

On the left are shortcuts to parental controls, tools and My F-Secure which is essentially a link to the website where you can manage the devices being protected and your subscription.

Clicking the virus Settings link opens what looks like the Windows 10 Settings app where you can see the malware features including DeepGuard, Ransomware Protection and Web traffic scanning.

There are also sections for Secure Browsing, Scanning settings, Updates, Privacy and Support.

Initially it looks there’s plenty of protection, but compared to rivals, it’s actually quite basic.

There’s no firewall, no spam filtering and no monitoring for unauthorised use of your webcam or microphone. You don’t the extra tools that most rivals offer such as file shredders and performance optimisers either. Maybe you don’t want all those, and F-Secure could be a good choice if you’re just after the basics, but it’s worth knowing the differences.

Protection from ransomware is very similar to what Windows 10 has as standard, using Protected Folders to stop apps from altering any files in folders you choose.

As part of Secure Browsing, Banking Protection works in an unusual way. Instead of launching a special web browser as many other security suites do, F-Secure stops ‘untrusted apps’ as well as disabling scripting and command-line tools , and clearing the clipboard.

A dedicated browser, such as Bitdefender’s SafePay, seems to us a better way to protect financial transactions, whether using your bank’s website or paying for goods on websites. F-Secure says it prevents untrusted apps from connecting to the internet while you’re using your banking site or paying for goods, and stops you visiting unsafe websites. But if a keylogger or malicious screen capture tool did manage to evade detection prior to you opening your bank’s website, there’s the potential it can deliver your credentials to the bad guys when the internet connection is restored.

Another issue with web protection is that the green tick appeared after enabling the extension only in Chrome: other browsers remained unprotected. Delving into the settings revealed a button to install the Firefox extension and instructions for reinstalling the extension in Chrome and Microsoft Edge.

Family Rules is, unfortunately, exactly like this. When you click on the shortcut in SAFE’s main interface you can see an overview of the current rules, but to change them you’re redirected to your F-Secure account on the web – not ideal.

At least from there you can send a link to the device you need to protect and it will take you to the app store and log you into the app without having to enter your username and password yet again. (It will also install Safe Browser at the same time). Installing the app uses one of your licenses, so if you have several kids with more than one device, you suddenly need a lot of SAFE licenses.

In terms of limits, you can set an overall time the child can use the device during weekdays and separately for weekends, plus a bedtimes for the same two.

You can’t even specify the exact time: you have to select it on a slider which rises in half-hour segments until you reach four hours at which point it then goes in hourly increments.

This means you can’t prevent them using the device when they’re supposed to be studying, much less allow only certain apps at certain times. Which parent wants their child free reign to spend their entire screen-time allowance on TikTok?

Plus, the rules you set up apply to the device, not the child, so it isn’t even possible to set an overall time across all their devices.

As far as malware protection goes, both AV-Test and AV Comparatives rate F-Secure among the very best. In AV-Test’s most recent report – December 2020 – SAFE 17 (the version tested) scored top marks for protection, usability and performance.

It didn’t fare quite as well with AV Comparatives but still blocked 100% of Windows malware in its real-world protection tests in November 2020.

SE Labs in London didn’t rate it nearly as highly. But these are results we trust most – largely because it’s the only one of the three which is AMTSO certified.

F-Secure SAFE was ranked 12th in its October to December 2020 report, with a Total Accuracy rating of 92%. For context, Kaspersky, McAfee, Avast and AVG scored 100%.

In particular it failed to detect three malware samples and was fully compromised by all of them. These were all downloaded from the web, showing that while SAFE does a great job of blocking targeted attacks, it fell down on the basics of known malware.

It’s also worth noting that in the same period, Windows Defender did a better job of protection than F-Secure.

On Android you’ll find extra tools including anti-theft and also a privacy tool which will tell you which apps can access sensitive information.

As always, iOS gets the least features because of Apple’s restrictions. So there no antivirus, but there is parental controls, browsing protection (when using SAFE Browser), an indication of which banking sites are safe to use (but you’ll usually use a bank’s own app anyway) and anti-theft tools.

F-Secure TOTAL costs £20/$20 more per year than the equivalent number of SAFE licenses, which is pretty good value for a VPN, password manager and ID protection.

Norton 360 Deluxe, though, offers more features than SAFE, including cloud storage, and costs £34.99 for the first year (for five devices) and £84.99 after that.

Check our other recommended security suites and you’ll find a similar story with other packages.

We came to a similar conclusion back in 2018: F-Secure SAFE could (and should) be a great choice, but a lack of features and – this time around – a less-than-perfect score sheet for malware protection.

It may be a little cheaper than some rivals, but factor its basic nature and it’s difficult to recommend.