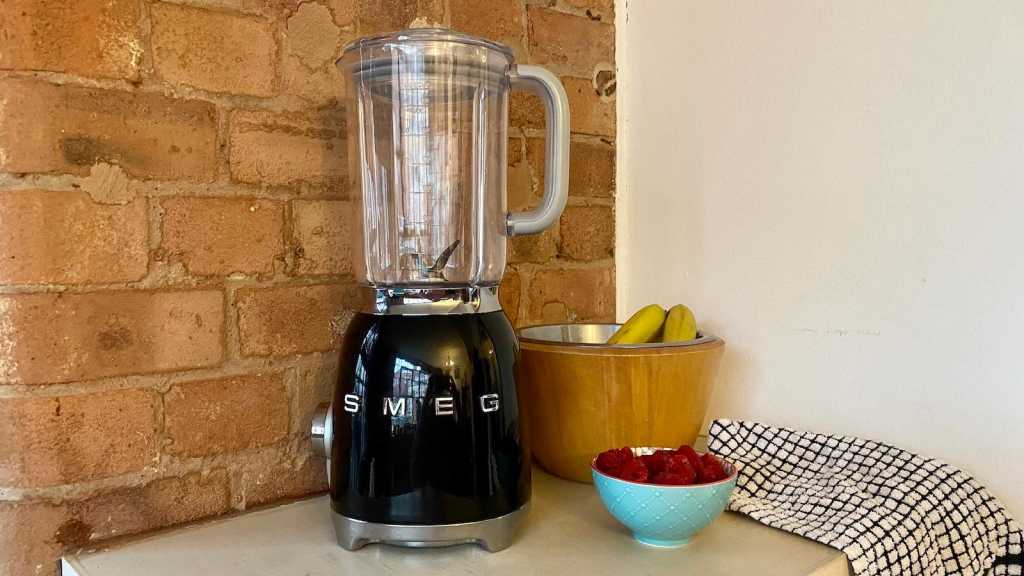 It’s a good all-round blender but not a specialist appliance. You’re paying a premium for the beautiful Smeg design – but not everyone will object to that.

Smeg’s electric jug blender is part of its range of 1950s-style appliances. It’s available in a number of colours, including pastels, bright red, black, cream and grey. As you’d expect, it’s handsome, with Smeg’s characteristic shiny finish and curved lines. It also has a neat footprint, so it won’t take up half of your countertop.

The Smeg blender feels sturdy and durable, with a solid base and a thick jug, made of BPA-free plastic Tritan. The jug itself has a capacity of 1.5 litres and is heat and dishwasher safe. It has markings in cups, ounces, millilitres and litres. The lid is particularly nicely designed, with a deep seal that keeps it firmly in place while you’re blending.

The centre of the lid is a cup, which you can remove and use to add ingredients to the mix during blending. It’s a handy feature that means you don’t have to wrestle with the lid’s seal just to add a little more liquid while you’re using it. 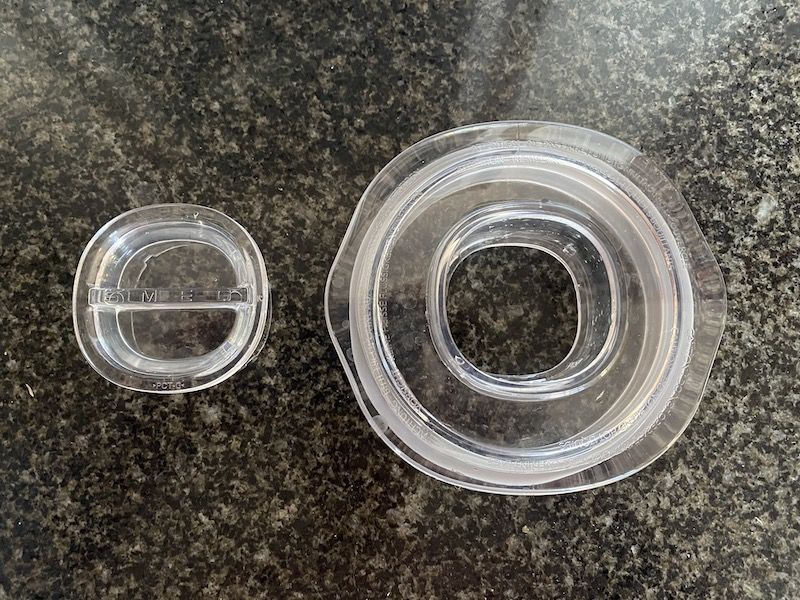 In another nice touch, the cup doubles as a key to take out the blades from the base of the jug. Simply slot it into place and turn, and the blades pop out – which must be done if you want to put the jug in the dishwasher. The jug and lid are dishwasher safe but the blades aren’t.

The blender’s controls, on one side of the base, are simple and elegantly designed. There’s a pulse key, and below it, a large start/stop button and a dial with speeds and pre-sets. 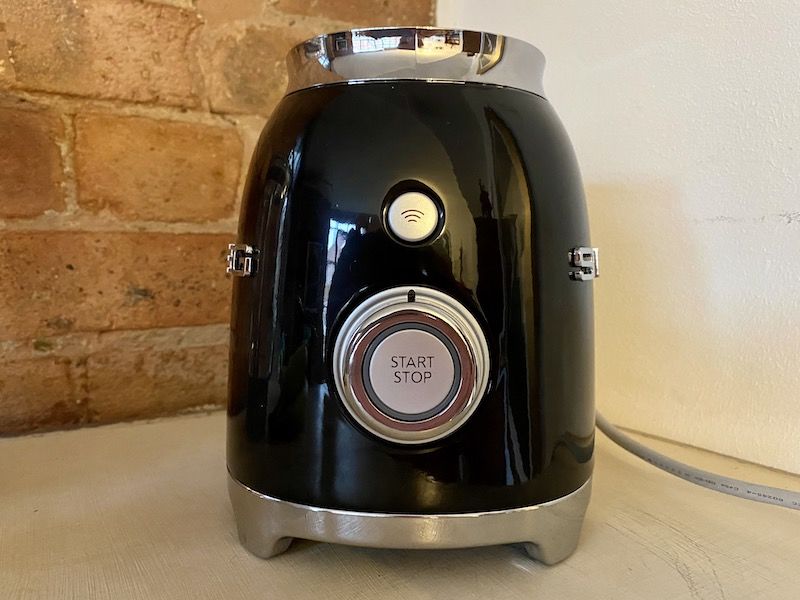 A jug blender is a workhorse that should serve you well for a number of tasks: mixing, pureeing, making soups, smoothies and sauces. Yes, it looks good but the proof of the blender is in the blending, so how does it perform?

The Smeg blender has four speeds and two pre-sets – for making smoothies and crushing ice. These are fairly basic settings but once you start blending, you can turn the dial up or down to change the speed, giving you a lot of control during the process. It’s reasonably quiet while in use as well.

The pulse function, which you should only use for 5 seconds at a time (2 seconds on dry ingredients), gives you the option of a quick, intense blending burst and is handy for breaking up big chunks of fruit before smoothing them into a mix, or for adding ingredients at the end of a smoothie or salsa that you want to keep chunky.

Although the jug is heat-resistant, it can’t really be used for hot ingredients, so if you want to make a roasted vegetable soup, for example, you’ll need to let the veg cool before you blend. However, it made an airy, velvety soup in our test. 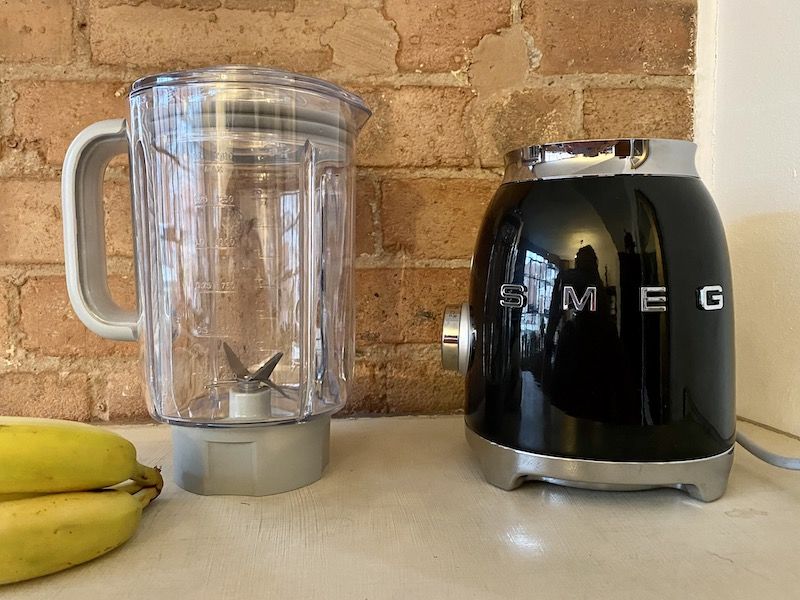 Like most jug blenders, it works best with liquid ingredients and won’t do a great job of breaking up a handful of nuts for a topping. If you have a mix of liquid and tougher items, you can add the solids afterwards and get a decent blend.

The smoothie setting made a silky, frothy smoothie and the ice cube setting tackled ice with ease, although we found we had to pause and shake up the jug to get at the chunks that had initially escaped the blades.

Nonetheless, we’d be wary of buying it and using it to crush ice on a daily basis as this could affect the motor and shorten the life of the appliance. It’s 800 watts, which suggests its motor is of good quality. But blenders work hard and people buy 2000W appliances for a reason – and that’s so that they don’t have to keep re-buying.

To protect the motor on your blender, use the pulse function, don’t overfill the jug – especially if you’re blending items like ice or frozen fruit – and only blend for short periods of time. If you have tough foods to blend, it’s tempting to slam down on the power button for as long as possible, but quick pulses are better for the machine and your recipe.

It also has a safety lock which shuts off the blender when the jug is removed from the base and a power indicator light.

The Smeg blender is available from a number of online retailers for approximately £179. That’s expensive for a blender and you’re definitely paying a premium for the Smeg design.

However, it’s well made and on the lower end of the price range for the highest-quality blenders on the market, which can cost from £250 for a KitchenAid to £500 for a Vitamix. Spending more will give you an appliance that could all but crush rocks, but the Smeg should last you for years to come as long as you take care of it.

Currys has the best price we can find at the moment, in black for £150, in cream for £160 or silver/grey for £179, although you can’t have a blender delivered right now. They’re only available for collection.

It’s available in cream and pastel green from eCookshop for £170.95. AO.com also has it in pastel green for £179, although it’s out of stock in other colours. Amazon UK has it in a variety of colours from £179 and it’s also available on Amazon in the US in six shades for $259.95.

Other stockists include John Lewis, although the blenders are sold out at the time of writing.

The Smeg blender is a high-quality all-rounder. But for the same price, you could get a specialised appliance, or one with more functionality. If you’re going to use your blender every day to make drinks with crushed ice or frozen fruit, we’d suggest you invest in a tougher, higher-watt appliance. And if you’re looking for a blender to regularly make soups, you might want to get an appliance that can handle warm ingredients.

But if you’re looking for a well-made blender that looks great on your counter, is enjoyable to use and easy to clean, this will be a good purchase.

If you’re interested in other Smeg countertop appliances, check out our reviews of the Smeg espresso coffee maker, Smeg coffee grinder and Smeg hand blender.