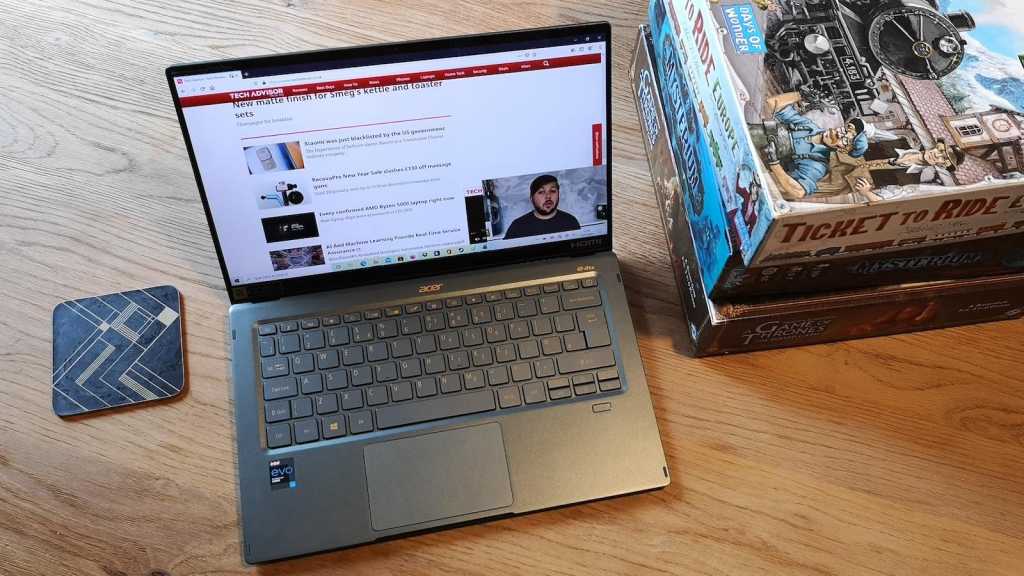 The latest version of the Swift 5 is an excellent Windows 10 laptop which somehow manages to pack high performance, an excellent display, and a battery that’ll last all day into a very tidy and lightweight package.

And when I say ‘lightweight’ I really mean it; the Acer Swift 5 weighs just over a kilo, giving the LG gram laptops a run for their money in the low weight:performance stakes.

Acer promises that this range of Swift 5 laptops will give up to 17 hours of battery. Such claims, of course, need to be put to the test – and that’s why we’re here.

I’ll tell you everything about the battery of the Acer Swift 5 (spoiler: it’s very good) along with everything else (spoiler: also pretty good) below.

So, as I’ve mentioned a couple of times already, the Acer Swift 5 (2020) is very light indeed. When you take it out of the box, you will likely stare at it in disbelief for a moment, and heft it around in one hand to ‘test’ its weight. Yes, it really is that light.

Colour options available to you are white, blue, or green – I was sent a green one, which in reality is more of a gunmetal sort of colour with fetching coppery accents.

When you open up the Acer Swift 5, you’ll notice that the hinge portion of the chassis features a pair of little rubber feet and is angled in such a way that the deck will rise up off of your desk slightly.

This is a neat little design trick intended to make it easier for warm air to be blown out and away by the laptop’s fans. It’s by no means a unique feature – it’s something that Asus has been doing for a long time with laptops like the Asus ROG Zephyrus G14 – but it’s welcome all the same.

Despite the lightweight and airy-feeling build, the hinge mechanism is a little on the stiff side and is hard to open with one hand.

A teeny tiny fingerprint scanner sits below the arrow keys, over on the right. While I had no problems scanning fingers on this, people with bigger hands may struggle. Otherwise, everything feels nicely laid out on the deck.

The super-slim bezels practically hug the edges of the 14in display, which really leaps out on the Acer Swift 5. This, plus the raised hinge, slender profile, and uncanny lightness of the device add up to a very premium-feel experience.

The Acer Swift 5 is sexy, and it knows it.

The Acer Swift 5’s keyboard is serviceable enough – both the layout and the typing experience is similar to what we saw on the Acer Swift 3 and Acer Aspire 5 2020.

Keycaps depress and ping back nicely. While none of the keycaps themselves are individually lit, there is a backlight for the whole board, so you can work comfortably in the darkness of a conference centre/lecture hall/the abyss.

While the trackpad doesn’t have a premium glass or rubberised coating, it doesn’t feel particularly plasticky. There is only a slight element of resistance here, so swishing and swiping through menus never really feels like a drag (no pun intended).

While the Acer Swift 5 isn’t a convertible or a 2-in-1 laptop, the 14in Full HD (1920×1080) IPS display is touch-sensitive, and promises maximum brightness of 340 nits, and full coverage of the sRGB colour space, meaning, in lay English, that the screen will be bright enough for you to be able to work anywhere, and colours should look full, and not washed out.

Using a Datacolor Spyder X Pro colorimeter, I recorded peak brightness of 430 nits, which is very high and a lot more than Acer says – plenty enough brightness to punch through the glare of a bright, sunny day. At 50%, brightness fell to 200 nits on the nose.

Colour space coverage is very good, too, with 98% of the sRGB gamut filled, and 78% of both the Adobe RGB and DCI-P3 colour spaces covered. Viewing angles are good too on the horizontal, less so on the vertical.

The main takehome point here is that the Acer Swift 5 (2020) offers a lot for photography students, or anyone venturing into photo editing. If you can pick up Swift 5 with dedicated graphics, that’d make tweaking snaps in Photoshop or video editing even easier.

Budding snappers who prefer to work in the wider Adobe RGB colour space out of the box may well consider the Dell XPS 13 9310 – either that, or you’ll want to work in one of the best monitors available. The Swift 5 has a Thunderbolt port, so the option to expand is there.

The stereo speakers are a mixed bag, as higher trebly sounds sound clean and crisp, but bass tones are not very distinguishable, and the limitations become apparent when you nudge the volume above 70%.

That said, they’re not terrible – TV content sounds good enough. The worst thing about the speakers is that they’re positioned underneath the deck, meaning some of the sound will be bouncing off your desk, or will be absorbed by your lap, a cushion, or your duvet.

It’s not just all slim builds and fancy styling, the Acer Swift 5 will smash through basic PC productivity tasks, hopping between Excel sheets, and Slack convos with ease.

The Swift 5 review model I was sent is an ‘SF514-55T’, which is powered by an Intel Core i5-1135G7 processor, 8GB of RAM, and has a 512GB SSD. There is no dedicated graphics processor on this model, with all video and graphics rendering instead handled by the integrated Intel Xe Graphics unit of the 11th-gen Intel CPU.

Models come with up to 1TB of internal storage, 16GB of RAM, and the option of Nvidia MX350 dedicated graphics, all crammed into a chassis that feels like it weighs nothing at all.

While opening and tabbing between multiple photos in GIMP is rarely an issue here, things get hot and noisy quite quickly. The fans will kick into gear even when you’re doing simple photo editing tasks like adjusting light levels.

Running PC Mark 10, I saw an overall score of 4697 – breaking that down further I got 9499 for Essentials, and 6353 for Productivity, and a seemingly less good 4665 for Digital Content Creation, which I’m chalking up to the absence of a standalone GPU.

As I said above, this won’t hinder you if you’re doing basic photo edits, though you may run into issues if you’re cleaning up a lot of big photo files on a larger monitor. For anyone else doing less serious photo work, this will not even remotely be an issue.

Gaming-wise, you can get through full games of Civ 6 here, albeit with some pronounced slowdown from the Industrial Age onwards. The Acer Swift 5 will do very nicely for the likes of Fortnite and Apex Legends, but for more demanding AAA games, you really need to be looking at a gaming laptop.

You can see the full benchmark results below compared to its predecessor and key rivals including the HP Envy 13, MacBook Air M1 and Huawei MateBook 14.

There’s a lot of competition out there, especially the MateBook which offers outstanding value for money.

The main takehome point here is the performance of the 65Wh battery. Looping a film with the brightness locked to 120 nits saw the Acer Swift 5 last for an incredible 18 hours and 14 minutes.

Plenty enough juice to last a working day. When playing games off of the battery, I’d wring about three hours of power out of this, but for office purposes, I’d easily have 50% left in the tank after eight hours.

From empty, it takes about three hours to fully recharge the Swift 5, but you can get just over 90% after two hours at the mains, and over 50% after an hour.

The Acer Swift 5 comes with a fairly standard-looking set-up – on the right-hand side, there’s a 3.5mm headphone jack, Type-A USB 3.2 port and a Kensington security slot.

On the left flank, you get an HDMI 2.0 port, another Type-A USB, and a Type-C USB port, all below the port for the mains adapter.

It’s worth drawing attention to the Type-C port, as it supports Thunderbolt 4, the latest Thunderbolt standard. You may care about this because it means you’ll be able to connect to up to two 4K monitors instead of one, which could come in handy if you’re working or studying somewhere with a high-end set-up.

Otherwise, it doesn’t offer a massive improvement over Thunderbolt 3 – you can still charge devices, connect to monitors, make use of multi-purpose USB-C docks, and transfer data (capped at 10Gbps here) all over one connection like before.

In terms of wireless connectivity, a current gen Wi-Fi 6 module is installed, meaning with the latest Wi-Fi 6 routers and mesh networks, you should be able to achieve the fastest wireless speeds going – I saw speeds in the region of 720-1080Mbps when working one metre away from a Wi-Fi 6 access point (a Netgear Orbi RBK750) on the 5GHz Wi-Fi band. This will become a bigger deal in the future, once routers and mesh Wi-Fi systems begin to feature Wi-Fi 6 radios as standard.

You also get the latest Bluetooth standard – Bluetooth 5.0 – here, meaning you can stream music to Bluetooth speakers from greater distances than before.

When the Swift 5 refresh was announced back in September 2020, Acer said that models with bigger 1TB SSDs and Nvidia MX350 dedicated GPUs would be available to buy.

At the time of writing, I was only able to find reference to the model tested – i.e. one with 512GB and no dedicated graphics – on Acer’s UK site. Acer may well launch more powerful versions of the Swift 5 (2020) in the coming months, but for now, this is the only model you can buy in the UK.

From retailers,  Currys PC World is selling at £899 with a Core i7 option at £999. Meanwhile, Amazon has a Core i7 model for the same price.

If you need something which offers a higher performance, you will be able pick up models with a Core i7-1065G7 CPU, 16GB of memory, and the aforementioned. You can get models with a bigger 1TB SSD as well, should you want more local storage.

As mentioned earlier, there’s tough competition in the laptop market so check out our best laptop chart to see what else might fit the bill.

The Acer Swift 5 (2020) is an excellent value for money package, blending good overall performance with a brilliant 14in display, and a lightweight design.

That said, the range starts at around the £1000 mark, and so if that’s a little too much of a stretch for your budget, you may want to consider something like the Acer Swift 3 or HP Envy 13 which, while smaller, offer a similar light-but-powerful experience, for about £150-200 less.