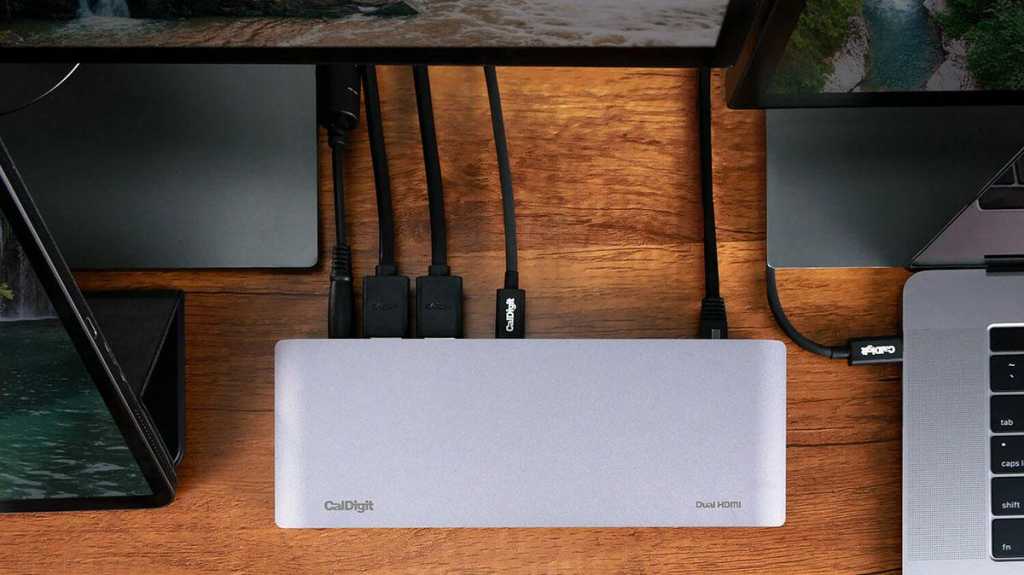 Caldigit’s latest laptop or tablet docking station, the 10-port USB-C HDMI Dock, is similar to its popular USB-C Pro Dock but with double HDMI ports rather than DisplayPort video. It also offers more power delivery at 94W, compared to 85W.

Using it, you can convert your portable computer into a heavy-duty desktop workstation, with all sorts of connected devices and up to two large, high-resolution displays.

Despite its name, it’s a full Thunderbolt 3 or 4 docking station that works with USB-C and any certified USB4 laptop or tablet.

You connect your computer to the dock with the included 0.7m Thunderbolt cable (which also works with USB-C laptops), and, hey presto, all the ports on the dock now belong to your computer. That connections also supplies power to charge the laptop or tablet.

The USB-C HDMI Dock is sleek, attractive and lightweight, with an aluminium case that has fins on its sides to help with cooling.

It’s a horizontal design, in comparison to other vertical-orientation docking stations. 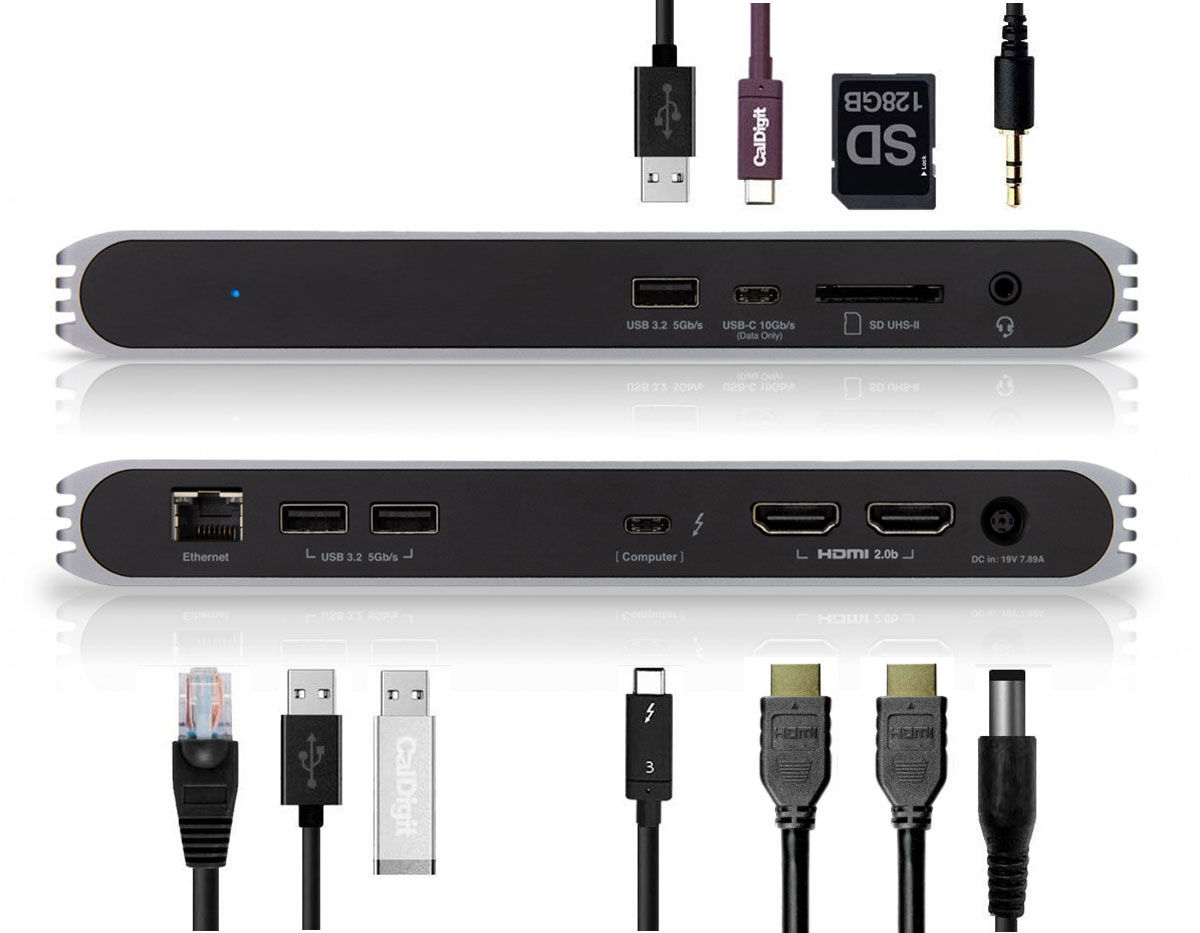 The USB-C HDMI Dock uses the Titan Ridge chipset that means it can support both USB-C and Thunderbolt 3 computers.

Although the addition of new variants of USB-C and Thunderbolt might appear confusing, the latest types actually make things a lot simpler.

Previously, the benefits of Thunderbolt 3 (T3) depended on the model of laptop you are using.

Apple’s T3 MacBooks boasted all the bells and whistles, but Windows laptops often didn’t, and you’d have to check your model’s tech specs to understand what it was capable of when using T3.

For example, it might not offer the full 40Gbps bandwidth or support two 4K external displays at 60Hz.

With Thunderbolt 4, all laptops have to support the same great features, so life should be easier for Windows users buying a new laptop or connecting to a Thunderbolt docking station.

Thunderbolt 4 is USB4 with all the highest features certified, and both are compatible with each other – another big benefit when choosing a dock.

USB4 starts at 20Gbps but can reach Thunderbolt’s 40Gbps maximum.

The 94W power delivery (PD) is impressive, and allows a top-end laptop such as Apple’s 16in MacBook Pro to remain fully charged even in use. The official max USB Power Delivery spec is 100W, so this gets very close to that, and you’d expect the dock itself to take some of that power anyway.

Other docks match this level of PD, although many max out at 60W, so if your laptop is power-hungry, pay special attention to the dock’s power delivery. 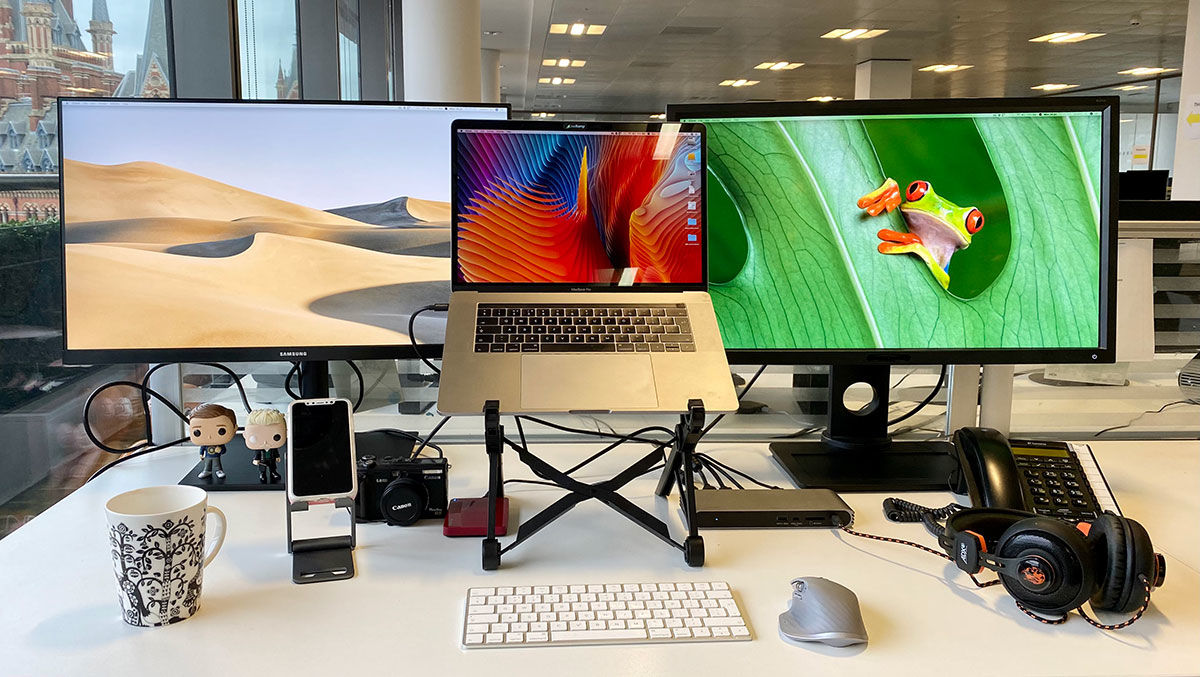 As its name suggests, this dock uses dual HDMI rather than DisplayPort that you see on many docks, including Caldigit’s own USB-C Pro Dock.

USB-C laptops can be connected to one or two external 4K displays at 30Hz, in Extended mode, where each screen is independent.

USB-C tablets can support one external display in Mirrored mode, which shows the same image as on the tablet’s screen, but at potentially much larger size monitor.

Thunderbolt laptops can handle up to two external 4K displays, each at superior 60Hz in Extended mode (or Mirrored if you prefer).

If you prefer DisplayPort, then Caldigit’s USB-C Pro Dock is very similar but with dual DP rather than HDMI.

The Gigabit Ethernet port on the dock means you can rely on stable and fast Internet access, rather than weak and insecure Wi-Fi. If you’re in a shared Wi-Fi environment, this can make all the difference to your browsing and download speeds.

The SD Card reader is UHS-II, so super quick (up to 312Mbps). It’s not just for camera cards. SD cards make excellent affordable storage options at up to 1TB.

With a card adapter, you can also use microSD cards in the dock’s SD slot.

Or you could use the front-facing, fast 10Gbps USB-C port to attach a 1TB or 2TB SSD for backup and expanding on your device’s internal storage.

The USB-A ports can also support SSDs or hard drives, although at not as fast data-transfer speeds.

Some docks feature faster 10Gbps USB-A ports, so if you need that level of bandwidth on the old USB standard, you should consider a dock such as the HyperDrive Gen2 thunderbolt 3 USB-C Dock or the Anker PowerExpand Elite.

These alternatives also boast an extra USB port, but three should be plenty if you’re using a wireless mouse and keyboard.

The USB4-certified Caldigit USB-C HDMI Dock is a sleek, professional laptop and tablet docking station, with both USB-C and Thunderbolt compatibility.

Its 94W power delivery capability means it will keep even a top-end laptop fully charged, and its ports will satisfy most users.