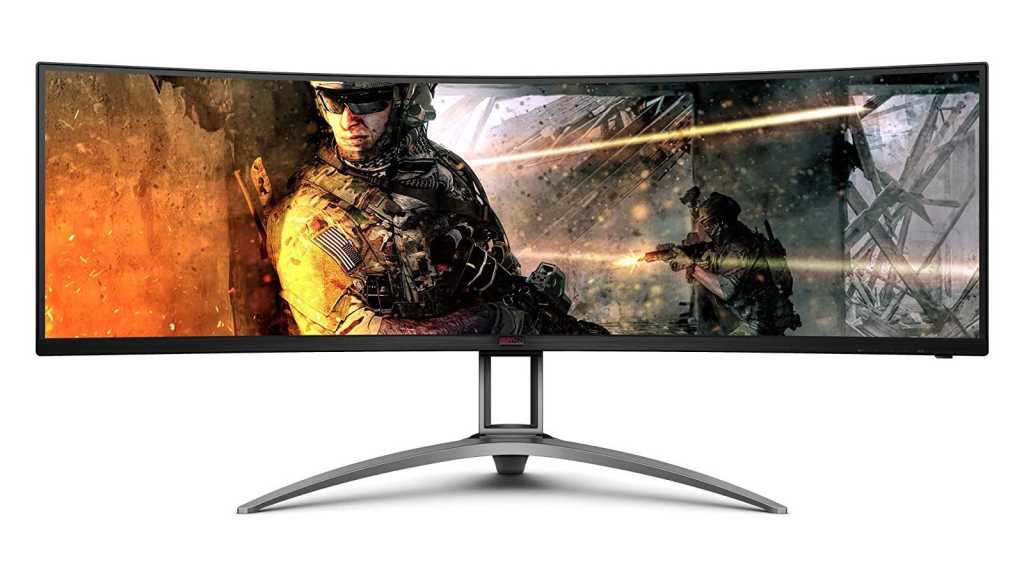 As impressive as this screen is for some titles, it’s not for every game or application, and those limitations might become irritating if you switch to using different software. The hardware is nicely specified, and reasonably priced, but isn’t for everyone.

Ever since GPU makers embraced the idea of multiple displays, gamers have explored the notion of ultra-wide gaming.

While taking multiple panels and creating a grander visual canvas works well for some titles, having the frames between screens distracts when adversaries appear on those junctions.

Curved panels can help create a display where all the parts are the same distance from the viewer, but the ideal solution is an ultra-wide panel like the AOC AGON AG493UCX that I’ve put through its paces.

Numerous games and applications that can utilise the far more expansive vista offered by a 32:9 ratio display. But is the cost of this solution worth the investment, and are there drawbacks to this ultra-wide solution?

Normally, I might comment here that a screen comes well packaged, or with the support already attached, and then move on to talk about other things. But not today.

Getting this monitor out of its packaging and on a desk is incredibly challenging for one person, and even for two, it represented a significant challenge.

The box graphics detail the side of the box to be opened, and that handling the screen by the frame could cause the panel to flex and be damaged.

I’ve seen precisely this sort of issue before with big curved screens and the typical approach, as used by AOC here, is that you attach the support and then use that structure to pull the panel from the protective foam tray.

Well, except that tray is at the bottom of the box, and the side of the box makes connecting the support impossible. You’re forced to pull a snuggly fitting tray out of the deep box, with the panel on it, before you can attach the support. Even with two people helping it took us a long time to achieve this seemingly simple objective.

Compounding the handling issues, once the support has been attached with provided screws, it doesn’t have any easy or convenience handles. It remains an awkward shape with most of the mass offset where you can’t hold it.

The possibility of generating a back injury or damage to the screen are both high, and I’d strongly suggest that AOC takes a long hard look at making the deployment of this product a much less fraught exercise than I had.

Desk space could also be an issue, as the support foot that looks like something stolen from the front of a Texas oil baron’s Lincoln is enormous. And, it only contacts the supporting surface in three relatively small points so I’d avoid using a softwood desk, as it might well leave marks given the hefty 14kg weight of this screen.

On the plus side of this awkward deployment, it comes with both HDMI, DisplayPort and USB cables and a small remote control, making it ready for use.

We’ve seen monitors described as ‘ultra-wide’ before, but design this takes that notion and expands it considerably.

At 49in wide and 1800R curved, this is one of the biggest panels we’ve seen at Tech Advisor that wasn’t a TV, and with an aspect ratio of 32:9, it provides a dramatic panoramic of any images placed on it.

The natural resolution is 5120 x 1440, making it the same size as two 1440p panels combined, and a significant amount of screen real estate for the GPU to manipulate.

This design isn’t the first screen with this ratio as Samsung has made several solutions at 32:9, including the 49in, and I suspect that the panel in the AG493UCX came from the Korean tech giant.

With such a large aspect ratio, the amount of curvature in the screen appears enhanced and failure to sit at the optimal viewing distance tends to create a noticeable distortion.

The horizontal scale also impacts the amount of adjustment that the support can reasonably offer, with just fifteen degrees of travel in both the tilt and swivel planes and 11cm of vertical travel. VESA 100 connections are provided if you want more adjustments and are prepared to buy a different mount or stand.

A strong point of the AG493UCX is the number of inputs, with dual HDMI and dual DisplayPort along with USB-C. The HDMI isn’t 2.1 spec, but 2.0 if you’re wondering, although it’s pointless plugging a next-gen console like the PS5 as it won’t use the full aspect ratio.

PC users can also connect the built-in USB hub to connect peripherals, like keyboard and mouse, directly to the screen. There are three downstream USB ports, with one of those configured for fast charging a mobile device.

After I’d got over the trauma of getting this humungous panel on to a desk, connecting it up to a computer proved to be another challenge.

Not that it doesn’t use the standard DisplayPort and HDMI inputs, its that getting a clear view of the ports for inserting cables is difficult. The AG493UCX doesn’t rotate, and it doesn’t tilt back enough to make the ports easily available. I’d recommend finding a mirror and placing it on the table and using that to see well enough to insert cables without complete frustration.

Once it is connected, my Windows tests system immediately recognised it and offered the correct resolutions. Oddly, Windows recommends a resolution of 3840 x 1080, even if the OS is aware the screen has a higher mode.

Using this menu with the row of buttons on the lower right of the frame is less than intuitive, but AOC includes a remote that makes it much easier to navigate – a rare boon in the monitor world.

The only issue with the menu and remote is that they only become active when a display is synced with the panel. If you remove an input device leaving the display pointing at the empty port, you can’t then use the menu to change the input source.

With such a large screen, one advantage of the scale is that the speakers here are 5W each and not the usually squeaky 2- or 3W drivers that are typical.  These sound much better, but you get no control over the treble or bass output, regrettably.

VA technology panels like the one in this monitor have improved dramatically over the past few years, providing a good colour gamut and decent refresh rates, if not the best of either requirement.

In terms of the display quality that AOC has on offer here, its an interesting mix of good, bad but relatively little I’d consider outright ugly.

My Datacolor SpyderX analysis revealed that the colour gamut here isn’t the best I’ve seen on a VA panel, but it offers respectable number in 100% sRGB, 83% AdobeRGB and 89% of the PCI-P3 range.

The brightness detected is close to the quoted number of 550 nits, as is the static contrast of 3000:1. And, I was impressed that with such a huge panel, the uniformity of brightness and colour is within a few percentage points over the entire display.

If this display has a weakness its that the tonal response is underwhelming, and the default gamma equates to 2.3, for no apparent good reason.

As a DCI-P3 colour profile, green is the weakest side of the gamut,  but not enough to skew our results significantly. And, it delivers enough gamut to represent HDR content effectively. That said, this screen isn’t bright enough to offer as good HDR as those with 1000nits of luminescence, and it doesn’t have any dynamic backlighting tricks to create impact.

Interestingly, AOC certified it for only HDR400, when the backlight should have been capable of making it HDR500 at the very least. The default refresh rate is good, but using the overdrive settings in the OSD, it is possible to reduce input lag to a minimum. The AGON AG493UCX can go up to 120Hz.

I should also talk about the invisible costs of owning a display like this, and we’re not just talking about power consumption.

Buying this display and not considering the GPU power needed to drive it would be an unfortunate mistake. A high-end GPU capable of driving this 5120 x 1440 display smoothly with fine details enabled is going to cost you at least £250 ($300) or more.

Those that want to leverage the 120Hz FreeSync capability will need a discrete video card with at least 6GB of GDDR and a high number of programmable shaders. Those with less impressive video technology need to run in a lower resolution or disable visual effects, or both if they want to maintain a playable framerate.

Anyone with integrated graphics should not consider this monitor, whatever is claimed by the CPU maker.

When considering the price of this item, it is worth considering that if you bought a good quality 27in 1440p monitor that would cost at least £350 ($400) and what the AGON AG493UCX represents is two of those but without the inconvenience of having a frame down the middle of the bigger image.

Therefore, the UK cost of £899 – available via Overclockers UK – isn’t as bad as might at first be expected. US customers can find it for just  $1,281 on Newegg or $915 if a refurbished model is of interest.

Check out our chart of the best gaming monitors to see what other options you have.

The suitability or otherwise of this design for any individual comes down to the software they run regularly. It’s terrific for racing games and combat simulations, although it wouldn’t work well for a flight combat simulator where you end up in a turning fight trying to look above the cockpit.

I played Elite Dangerous, World of Tanks and World of Warships on it, and with all of those and similar titles, it was a good experience.

For FPS games, the value of such a wide field of view is dependent on the title, and this monitor is of no practical value to those using a games console and not a PC. Some FPS games, like Overwatch, only support a maximum of 21:9 ratio, although a few can handle the 32:9 on offer here.

The resolutions supported by consoles don’t include the native one for this screen, and using a 16:9 ratio input ignores half the panel.

One trick it can achieve is displaying two inputs concurrently, allowing two friends to game with PC or console simultaneously on the same screen. A solution that only works if you are playing as a team, and not against each other, obviously.

Gaming at this aspect ratio is a niche use, but this display has some potential for those that might want to use it for business applications. If you edit videos and have complicated timelines, then a screen this wide might be ideal.

Being able to see a succession of timed events without side-scrolling or zooming out could speed up workflow, and make the handling of overlayed edits and effects easier to manage. Equally, those that use spreadsheets with lots of columns might be keen on seeing many at once.

It is sufficiently colour accurate with a little calibration to be of interest to photographers, but it is not ideal for working with web pages.

The problem that undermines both gaming and business use is that it is rare that a gamer only plays a single title indefinitely, and business users tend to use a suite of software tools – so think about it carefully.

In terms of the hardware and price that AOC are asking, this is a well-specified design that is priced realistically, being cheaper than the Samsung equivalent. However, it is a significant amount to spend on a single display, and for those unconcerned by segmenting frames, multiple monitors is a cheaper option.