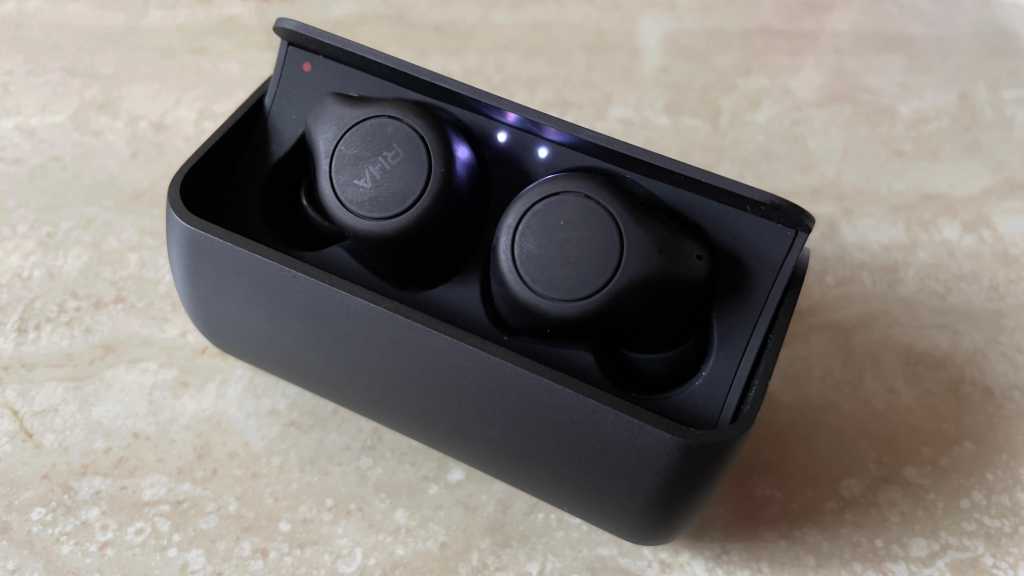 RHA’s premium wireless earbuds sound great, with decent ANC and an interesting design that should negate the need to adjust the buds in your ears, but with odd charging case compromises that mean charge is constantly supplied to the earbuds, you’ll have to charge it weekly regardless of use.

RHA has a reputation for creating headphones that not only sound phenomenal, but offer great design and high-quality build. We were impressed by the company’s entry-level RHA TrueConnect 2 earbuds when they were released last year, but we were left wanting a little more – especially when compared to high-end wireless earbuds like Apple’s AirPods Pro.

RHA’s answer? The RHA TrueControl ANC, a pair of premium wireless earbuds that look to take on the competition from Apple, Sennheiser and Bose using the company’s signature approach to audio and design – but has it been successful in doing so? Unfortunately, it’s not a clean-cut answer – read on to find out why.

Generally speaking, wireless earbuds have gotten smaller over time – just look at how much smaller Apple’s AirPods Pro are than the standard AirPods – but every now and again, a company will go against the grain. That company, in the wireless earbud world, seems to be RHA, with the TrueControl ANC earbuds best described as ‘chonky bois’.

The earbuds themselves are larger than most of the competition, but they’re designed that way. RHA took the decision to shape and contour the earbuds to make them essentially fill your entire ear. It’s a risk, given the fact that ears aren’t dissimilar to fingerprints in that they vary from person to person, but the aim is to provide earbuds that won’t twist or move once put in place. 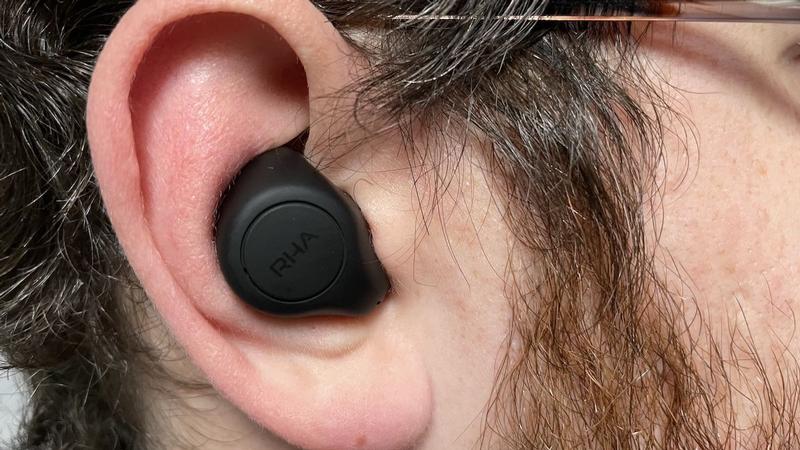 It’s certainly an odd sensation putting them in for the first time, especially coming from AirPods Pro, which are much smaller. You’re initially aware of just how big the earbuds are in your ears, and you’ll even be able to feel them when you move your jaw. But as with most things, once you get your tunes playing and you’re going about your day, it’s likely you’ll soon forget about it.

It’s worth the adjustment period because, for me, the TrueControl ANC buds are among the most secure wireless earbuds I’ve ever tried – even staying securely in place when going for a 5K run, possible in the drizzly winter months thanks to the buds IPX4 water resistance rating.

That’s mainly down to the contoured shape that let the buds wholly fit in the ear, but it’s also improved by the grippy matte plastic that covers them. The downside to the material is that they can get fingerprint-y and generally a little dirty pretty quickly, and it’s not an easy material to keep mark-free.

When not sat snuggly in your ears, the TrueControl ANC buds live in the accompanying carry case. It’s essentially the same design as that utilised by the cheaper TrueConnect earbuds, but with one key difference – wireless charging is now available.

For those unaware, the case features a rotating barrel and an aluminium frame, and it’s certainly a premium, well-built case, but it’s also much bigger than other wireless earbud cases I’ve seen, and it’s not without issue – although that’s something I go into detail about a little later on. 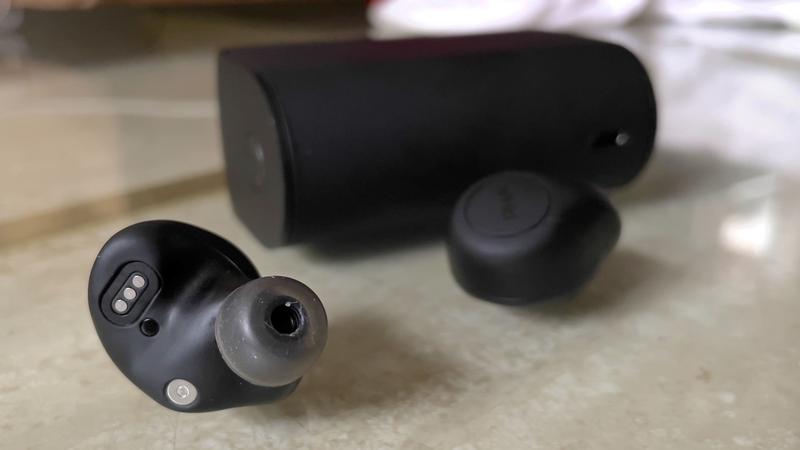 When it comes to wireless earbuds, controls vary from manufacturer to manufacturer. You’ve got companies like Apple utilising squeeze and tap controls, while others, like Google and RHA, have gone down the touch control route.

I reviewed the Google Pixel Buds 2 a few months ago and while the touch controls were extensive, I just couldn’t get on with them – especially with so many false activations adjusting the earbud position in my ears. That said, I was a little bit gutted when I saw that RHA had gone down the same route with the TrueControl ANC buds, put off from my experience with the Pixel Buds, but thankfully, the implementation is near-flawless.

That’s partly down to the inclusion of an actual capacitive touch surface in place of a motion sensor like with many alternatives, meaning you don’t have to tap quite so hard to activate the buds – just a light touch is enough to play or pause music. But Google’s buds also use capacitive touch surfaces on its buds, so why doesn’t RHA’s buds suffer from the same false activations?

The button-esque touch-sensitive surface on each bud sits in slightly from the edges, whereas Google’s Pixel Buds extend completely over the surface. Simply put, the TrueControl ANC buds give you a bit of room to adjust the fit without accidentally skipping tracks or toggling the ANC off. That’s not to say it won’t register genuine taps and swipes though; there were very few times when the buds didn’t pick up on a swipe or tap in my experience. 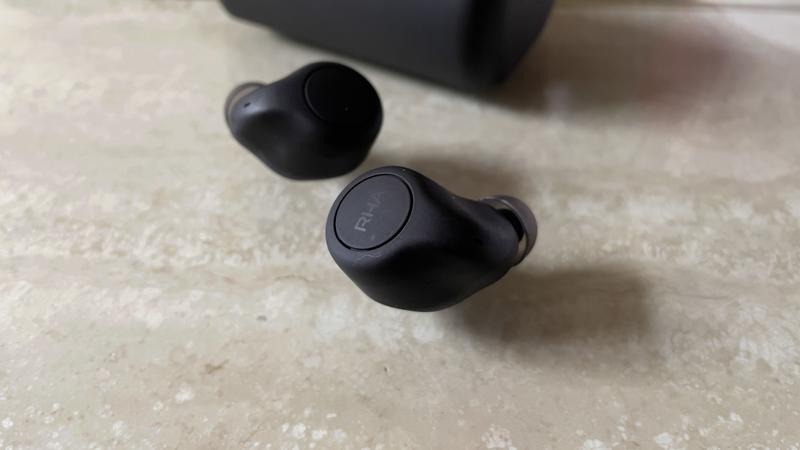 There are different combinations of taps and swipes to control various features, all of which are completely customisable, along with the EQ of the buds, via the RHA Connect app for iOS and Android.

Touch control system aside, you’ve got all the staples of high-end wireless earbuds, including auto play/pause technology when you remove the buds from your ears, along with ANC, which I’ll go into below, and an ambient mode that funnels environmental noise into the earbuds to make you more aware of your surroundings – perfect for runners and cyclists. ­

Audio quality with in-ear buds is largely dependent on the fit, which is why the TrueControl ANC buds come with a whopping 10 pairs of eartips in the box to make sure they’re snug in your ears.

It’s a big step forward from other manufacturers that often only include standard small, medium and large sets of eartips as standard, although this is a staple of RHA products in general rather than being exclusive to the new buds. It may seem a bit overwhelming to try out 10 different eartips, but believe me when I say that a perfect seal makes all the difference, especially when it comes to bass and noise cancellation.

Once you’ve found the perfect combination of eartips, you’ll be able to appreciate the impressive sound signature on offer from the high-end buds. There’s punchy bass without muddying the warm mids and detailed highs, vocals sound crisp and there’s decent stereo rendering too. The well-rounded performance means they can handle bass-heavy tracks like Imanbek’s Roses Remix and classical numbers like La Traviata with ease, and that’s further customisable via the RHA app. 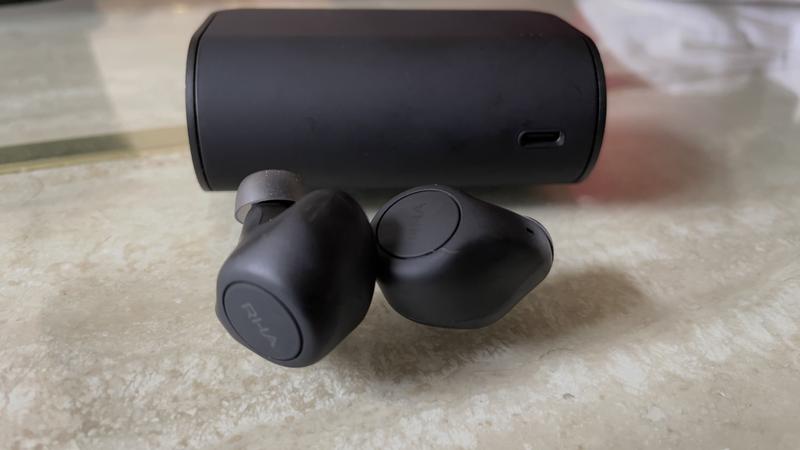 When connected to the buds, you’ll be able to switch between five presets – Neutral, Warm, Bright, Vocal and Energy – to tweak the output to your liking. It’s much more user-friendly than an EQ for audio novices, although the complete lack of custom EQ settings is a bit of a surprise considering it’s available on many similarly priced buds. Still, it’s likely only true audiophiles will mourn the omission – I found the presets, Energy in particular, really enhanced the listening experience.

There may be a slight discrepancy in audio quality depending on if you’re streaming from an iPhone or Android, with the aptX Bluetooth codec available for the latter, but it’s unlikely you’ll notice much of a difference unless streaming high-res tracks from the likes of Tidal.

As the name implies, the TrueControl ANC features active noise cancellation to help block out intrusive environmental sounds, and it works pretty well. The buds are able to cancel out low-pitched hums from fans and the like to a negligible level, making them a decent option for flights – whenever they happen again – and noisy commutes, but when it comes to higher-pitched frequencies like voices and car horns, sound can leak in.

This does become less noticeable as you turn up the volume, but you might struggle to clearly hear your favourite podcasts in loud environments at lower volumes.

Overall, though, the TrueControl ANC buds sound impressive and offer a tempting upgrade compared to many earbuds available right now.

RHA’s premium wireless earbuds should last around five hours per charge, with the charging case providing an additional 20 hours of playback before needing a top-up. That’s about average for a pair of ANC-enabled wireless earbuds – although non-ANC buds can last longer – but there’s a bigger issue afoot. 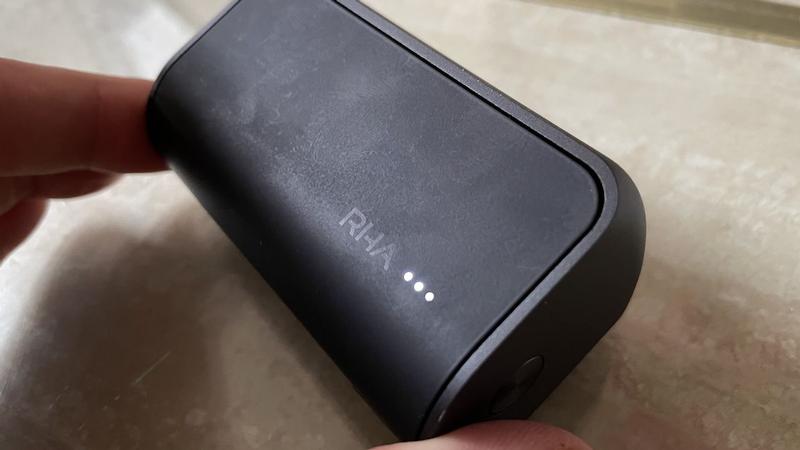 The bigger problem is that the case doesn’t hold charge for too long. I fully charged the buds and case, left them for little over a week or so and when I went to use them again, both the buds and case were completely dead. I reached out to RHA for clarification and the company confirmed what I suspected: that the case is constantly charging the earbuds, even once they reach 100% charge.

That’s something I haven’t seen on wireless earbuds since first-gen buds were on the market 3-4 years ago, and it means that regardless of use, the wireless earbuds and case will need to be charged roughly once a week.

It’s not only an inconvenience compared to other earbuds that can hold charge for weeks, but it also means that it’ll likely have a knock-on effect on the overall battery life of the earbuds. It’s common knowledge that constantly charging a battery will reduce its overall battery life, and with only 5 hours available out of the case at release, it’ll only get worse from here.

When you do come to top-up the charging case, you can do so via the USB-C port on the rear or via wireless charging, a feature exclusive to RHA’s high-end wireless earbuds.

The RHA TrueControl ANC wireless earbuds aren’t cheap, coming in at £249.95 in the UK and $299.95 in the US, putting them firmly up against established high-end buds including Apple’s AirPods Pro, the Sennheiser True Momentum 2 and Bose QC Earbuds.

The impressive audio performance, great fit and decent ANC performance mean it is worth the cash, but you’ll have to be prepared to charge it often – and that’s not usually a concession you have to make at the premium end of the market.

You can buy the RHA TrueControl ANC buds directly from RHA itself in the UK, and the US too. For more inspiration, I’d recommend taking a look at our selection of the best wireless earbuds.

The RHA TrueControl ANC buds are the next evolution in RHA’s audio offering. While the full-ear design did take some getting used to, the benefits – including a near-perfect fit and passive noise reduction – are worth the adjustment period. The touch controls are actually touch-based, rather than relying on a motion sensor, and thanks to some design smarts, you won’t suffer from the accidental activations prevalent on other touch-based earbuds.

You’ll get the same high-end signature RHA sound you’re used to from RHA products, with a balanced output suited to a range of musical tastes, and you can choose from presets within the RHA app to tailor the experience, although the lack of a dedicated custom EQ may disappoint some – especially at such a high price point.

The only real disappointment is in the battery life department; while a total of 25 hours charge is about average for ANC earbuds, the problem is that the case continually provides charge – even once the buds hit full charge – meaning that the case will have to be topped up once a week regardless of whether you’ve used them or not, and there’s a risk they might be dead when you need them most.

At least you can charge the case wirelessly when it does need a top-up, a first for RHA earbuds.