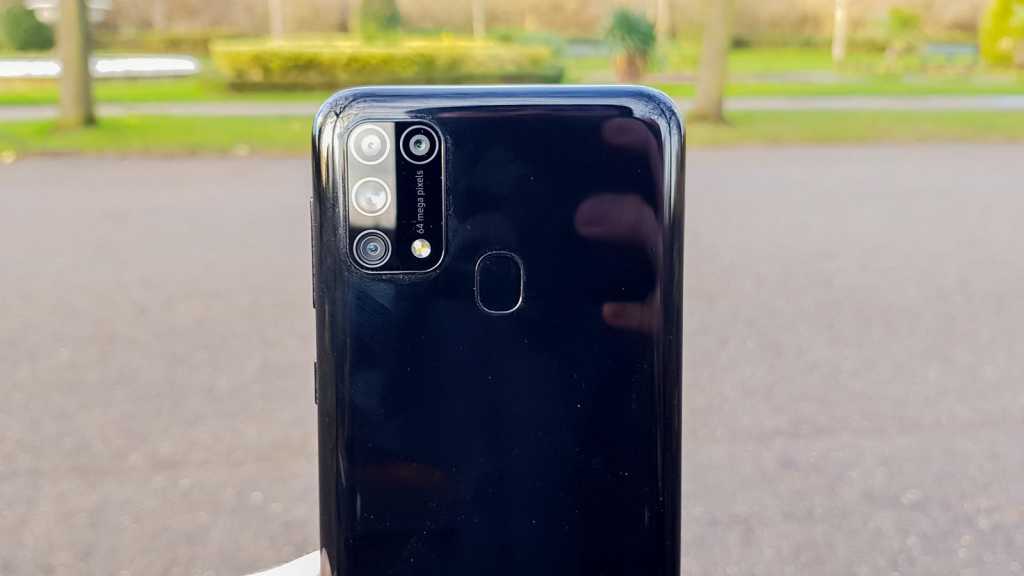 It’s far from the best budget phone on the market, but Samsung fans looking for a cheap alternative to the company’s flagships won’t be disappointed here.

Despite the profound impact of the coronavirus pandemic in 2020, the deluge of Samsung phones shows no sign of abating.  At £245, the Galaxy M31 is one of the most affordable devices in the company’s current lineup, aiming to provide a great smartphone experience at a fraction of a cost of the S and Note lines.

With a mammoth 6000mAh battery and competitive specs across the board, on paper it looks like Samsung is onto a winner. But how well does that translate to real-world usage? Read our full review to find out.

Samsung has clearly cut some corners with the Galaxy M31’s design. The most notable is the plastic back and frame of the device, meaning any illusion of this being a premium device is quickly lost. I was initially fooled by the Galaxy A51’s so-called ‘glasstic’ design, but there’s no mistaking that Samsung has opted for the cheaper material here.

It frustratingly remains a fingerprint magnet, but on the black model I tested the smudges aren’t too noticeable. The phone’s also available in blue and red, if you’d prefer.

Choosing plastic over glass usually leads to a more lightweight device, but that’s not the case here. The M31 comes in at 191g, significantly heavier than the regular S20 and only slightly lighter than the stylus-wielding Note 20.

While these things would be significant drawbacks for some people, I found they quickly faded into the background once I started using the device as my main phone.

That’s due in part to the screen, a gorgeous 6.4 Full HD (1080×2340) OLED panel which offers rich, vibrant colours and an excellent level of detail. I often wonder just how much of a tangible benefit displays of 1440p and above actually provide, so this was a wise compromise for Samsung to make.

It’s only 60Hz, but with the latest iPhones still not supporting a higher refresh rate, it would be wrong for me to complain about its absence here. That is something you’ll find on the £179.99 Realme  7, though.

Where I will complain is the teardrop notch, which protrudes into the top of the display and houses a 32Mp selfie camera. It feels completely unnecessary, particularly when the bezels aren’t the smallest and there’s a sizeable chin.

It does at least support a face unlock, offering a mostly reliable alternative to the physical fingerprint sensor on the back of the device. The latter is a bit higher up the phone than feels natural, but was impressively resistant to dust and moisture in my testing.

Next to it is a rather imposing camera module, housing 64Mp main, 8Mp ultrawide, 5Mp macro and 5Mp depth sensors. It doesn’t quite sit flush with the back of the device, but it’s sufficient that there’s not too much rocking when flat down on a table.

There’s not much to write home about the sides of the device, which thankfully means there’s no Bixby button in sight. Power button and volume rocker on one side, dual SIM card tray on the other, simple as that.

It’s at the bottom where you’ll find the most notable inclusion: a 3.5mm headphone jack. The M31 is something of an outlier in a world where most phones, including many Samsung handsets, have ditched the port. The phone supports Bluetooth 5.0, but it’s still nice to have the option to connect wired headphones.

The Galaxy M31 comes running the Exynos 9611 chipset, which combines with 6GB of RAM and 64GB of storage on the model I tested. Samsung’s own processors have typically struggled when compared to Qualcomm’s Snapdragon line, although there are signs it’s fighting back. Performance on the Exynos 9611 is thought to be similar to the Snapdragon 712, with both found primarily on mid-range phones.

Unfortunately, in my testing time it fell short of what I expect from phone in 2020, even one that’s priced so affordably. The main problem I encountered were app freezes, with Chrome one of the big offenders. It would often lag on a website for quite a few seconds, although that may be due in part to the number of open Chrome tabs I had.

The other notable area of slowdown was in opening and switching between apps. I found it taking a comparatively long time to launch everything from Facebook Messenger to Spotify, while the aforementioned double tap of the power button to launch the camera was far from instant.

These issues don’t make the phone unusable by any means, although they are frustrations you’re likely to experience on a regular basis. It’ll still work fine if you’re willing to be patient, but the M31’s shortcomings are more glaring when you consider the strong performance in so many other budget phones.

The performance gap is illustrated in the below benchmarks, where the M31 pales in comparison to some of the best cheap phones around

Another area of performance that’s worth noting is the speakers – and it’s a much more positive story here. A single downward-firing speaker combines with the earpiece to provide clear, rich audio. I still wouldn’t recommend listening to music or watching a film on it, but for the occasional YouTube video and social media it’s more than acceptable.

The Galaxy M31 comes running One Ui 2.5 over Android 10, and there’s no word on when it’ll get the upgrade to Android 11. If you haven’t used it before, Samsung’s skin is quite a departure from the so-called ‘stock’ version you’ll find on Pixel phones, although it’s come a long way from the clunky TouchWiz days.

The big appeal of One UI with regards to this phone is its optimisation for big-screen devices. Samsung divides the display into two sections, with all the controls you’ll need within easier reach at the bottom of the device. It won’t quite turn the 6.4in M31 into a one-handed phone, but does make a big difference to day-to-day usage.

Of course, this won’t extend to all third-party apps, but makes a big difference when you’re moving through Settings, taking a photo or making a call (yes, smartphones still do that!).

I’m a big fan of the quick settings menu, which allows you to make modifications directly from the notification shade, instead of taking you into the main app. Talking of settings, you can also customise the power key to open any app of your choice with a double press. I found the default quick launch of the camera to be particularly useful, but if you’d rather head straight to Instagram the option’s there.

Bixby’s appearances are also fleeting these days, with even the Google Discover-style cards to the right of the home screen ditched on recent One UI versions. It seems like Samsung has finally admitted its virtual assistant isn’t up to scratch, particularly when Google Assistant is available via a long press of the home button.

You can swap out that and the other two on-screen buttons for gestures, but I found the latter to be a bit laggy and generally not enjoyable to use on the M31.

Cameras are often an area where corners are cut on budget phones, but they remain a crucial ingredient of the smartphone pie. The M31 comes sporting quadruple rear lenses, with the main 64Mp sensor joined by 8Mp ultrawide, 5Mp macro and 5Mp depth sensors.

In general, I was impressed with the quality of stills from the M31. They offer a good level of detail and accurate colours, choosing to saturate images slightly less than Samsung phones have done in the past. Dynamic range is also solid, although it can struggle with exposure at times.

The camera app has a built-in scene optimiser, and seemed to do a good job of adjusting the settings automatically depending on what you’re taking a photo of. This includes switching to night mode, although that didn’t make a huge difference to the quality of low-light shots I was able to take.

The depth sensor enables portrait-style shots, although it tended to struggle quite a lot with edge detection. Like many other phones, the macro lens added almost nothing to the experience, as it wasn’t particularly impressive for close up shots.

A 32Mp front-facing camera yields higher quality selfies than I’ve seen on many phones, and it also offers the option to zoom out slightly and get more people into the shot.

The M31 is also capable of 4K video at 30fps on both the front and rear cameras, although the electronic image stabilisation (EIS) makes it a more pleasing experience on the latter.

Battery life is an area where the M31 excels on paper, with a huge 6000mAh cell. That’s larger than you’ll find on most phones in 2020, although it’s matched by the current budget champ in the Poco X3.

The two phones posted near-identical scores in PCMark’s battery test (14h22 for the M31 vs 14h24 for the Poco X3), which is impressive considering the M31 has a more power-hungry OLED screen.

A score of 8 hours and 30 minutes in Geekbench 4’s battery test is more average, but I doubt you’ll have any problems with battery life here. In my experience, I was able to get a good couple of days of moderate usage on a single charge.

When you do finally run the battery down, the included 15W adapter gets you back up to around 23% back in 30 minutes. This is marketed as fast charging, although many other devices can be juiced up much faster.

There’s no wireless charging, but that’s not a surprise or dealbreaker at this price point.

Talking of price, the Samsung Galaxy M31 comes in at £245/ US$ 299, and it’s exclusive to Amazon in the UK. The 6GB/64GB is the only model you can get on this side of the pond, although the International version linked above doubles the storage to 128GB.

That’s just about in budget phone territory, although competition is fierce at this price point. The likes of the Poco X3,  Realme  7 and Oppo  A9 2020 are all compelling alternatives and more more affordable than the M31.

It’s much more appealing if you’re only considering Samsung phones, with affordable devices like the Galaxy A20e offering a notably reduced experience.

The Galaxy M31 hasn’t been marketed nearly as heavily as Samsung’s flagships or even the mid-range A-Series, so you might not realise the company makes such a solid budget phone.

For £249, you get a gorgeous OLED display, excellent battery life and a highly polished software experience. There’s even a 3.5mm headphone jack, although the impressive speakers and Bluetooth 5.0 mean that might not be necessary.

It’s definitely not all good news though – performance is more than a little unconvincing at times and the sizeable notch and chin will be unsightly for some.

As a result, it’s unlikely to tempt people away from some other great Android handsets around this price point. But if you’re looking for the core Samsung experience at a more affordable price, this is definitely an option worth considering.