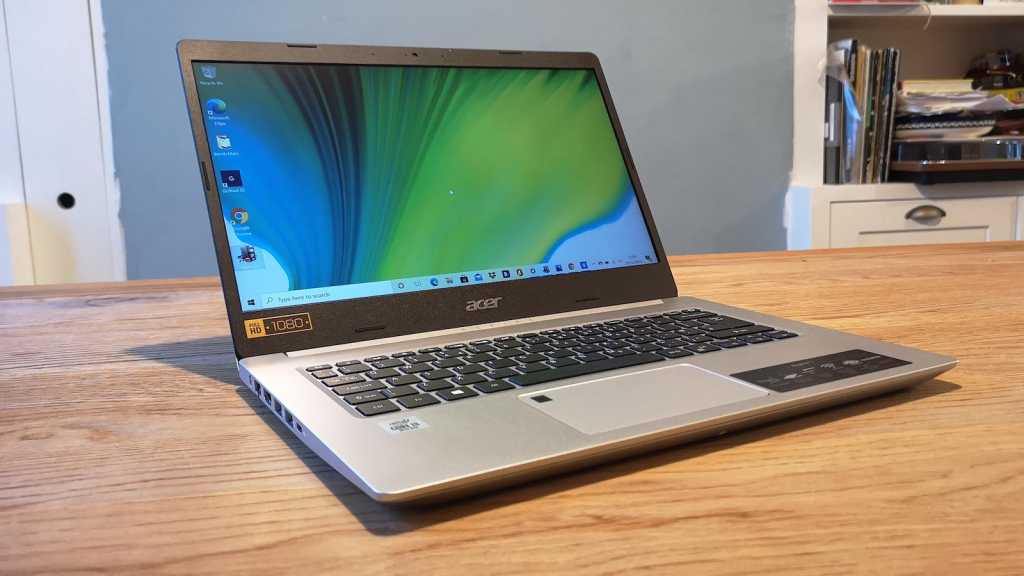 The Acer Aspire 5 (2020) is an inexpensive and capable laptop that will handle the PC basics with battery power to spare, but doesn’t dazzle elsewhere. If you need a straightforward daily driver, the Aspire 5 is a stable choice.

The Acer Aspire 5 range for 2020 (the ‘Aspire 5 A514-50 Series’ to be precise) comprises mid-range laptops with Intel 10th-gen processors, plenty of ports, and Full HD displays.

Acer’s Aspire laptops have always been substance-over-style machines, designed to be good-value PCs that aren’t flashy, but reliable. Translation: you won’t have much joy playing Fortnite or editing photos on one of these (there’s no dedicated graphics processor), but if you’re uninterested in gaming and Photoshop is of secondary importance, then an Aspire should appeal.

Those are all entry-level specs for a Windows 10 laptop in 2020, but that doesn’t mean that this is a dud for the kind of work the Acer Aspire 5 is designed for. Far from it, in fact.

If you do want more storage space and memory, there are models with bigger SSDs and more RAM available. Naturally they’ll cost you a bit more, to the point where if you’re prepared to spend a bit more dough, you might be better off looking at something like an Acer Swift 3, or a Lenovo Yoga Slim 7.

The Acer Aspire 5 (2020)’s design isn’t particularly flashy. True to its no-frills nature, the bezel measures 7mm at the sides and 15mm at the top, though the reflective Acer logos stamped on to the back, and underneath the display look nice, and the recessed ASPIRE text cut into the hexagonal hinge adds a dash of style.

Otherwise, it’s a fairly normal-looking grey aluminium machine. The Acer Aspire 5 (2020) measures 17.9 x 329 x 236 mm and weighs 1.5kg. Considering the number of ports Acer’s crammed in here, that’s no mean feat. For some buyers who don’t want to embrace the dongle life, this will be a godsend.

For the great majority of work situations, you’ve got everything you need, right here; there are two Type-A USB 3.1 Gen 1 ports, one supporting Power Delivery. Thankfully there’s a separate port for the power supply.

You also get an old-school Type-A USB 2.0 port, and a newer Type-C USB 3.1 connection. There’s an HDMI 2.0 port as well, for when you want to connect to a TV or external monitor, and the aforementioned Ethernet port for wired Internet access. Finally, there’s a fingerprint scanner here for extra security, as well as a Kensington lock slot.

The Type-C USB port does not support Thunderbolt 3, Intel’s all-singing, all-dancing standard that handles power, video, and data transfer all through one convenient connection. Considering the price of the Acer Aspire 5, this should not come as a surprise – Thunderbolt 3 is not cheap to implement, and it’s therefore not ubiquitous yet. Again, you should have enough to play with here ports-wise for this not to be an immediate issue.

That fingerprint scanner we mentioned is set into the top left corner of the trackpad, which is space-efficient and quite handy, especially if you choose to lock the Acer Aspire 5 with your left thumbprint. The trackpad itself is nicely sized, and responsive enough out of the box for you to swipe through menus and documents without any sensitivity adjustment.

The keyboard offers a very stable typing experience, thanks in part to the separated keys and intelligent spacing. Arrow keys double up as navigation keys, which will not be to everyone’s liking, but that’s a compromise that’s not uncommon in mid-range laptops. There is a tiny bit of flex in the centre of the deck, but nothing to really be concerned about.

On paper, the Acer Aspire 5’s display does not sound like a winner – we measured maximum brightness of 294.3 nits with a SpyderPro X colorimeter, and found it covered just 61% of the standard RGB colour space, 46% of AdobeRGB, and 45% of DCI-P3%.

Objectively, that is pretty middling. But speaking practically, on a laptop like this, that’s kind of academic, because the display is bright enough for you to be able to work most places, and the screen’s matt finish reflect much ambient light.

Vewing angles are pretty strong here, too. In all but the brightest and sunniest of environments, you’ll be able to check emails, write, and browse the web virtually anywhere.

Sure, Netflix content looks a little washed out, but it’s not going to impact your ability to work or enjoy The Queen’s Gambit in a significant way.

The stereo speakers here are fine for TV shows – dialogue sounded clear and crisp – but for music? It varies. Bass tones sound good, full, and rounded, but higher-end audio sounds tinny and squashed, especially if you push things above 50%.

The model we were sent for testing was powered by an Intel Core i3-1005G1, a dual-core 1.2GHz processor that can boost up to 3.4GHz, and 4GB of RAM. On paper, that’s more than enough for basic PC tasks, but not quite enough to cut it for anything more demanding.

As expected, the PC Mark 10 benchmark, which simulates a number of real-world computing applications from video calling to photo editing and everything in between, gave us an overall score of 3301.

That’s a pretty weak score in the grand scheme of things, but if you break that score down, you can begin to see why; the Acer Aspire 5 (2020) scored a very high 7357 for Essentials (i.e. web browsing and video conferencing) and an above-average 5190 for Productivity (i.e. toggling between multiple documents and spreadsheets). For Digital Content Creation (i.e. photo and video editing) a very low 2556, which is what drags the batting average down.

That’s entirely to be expected, and consistent with our observations. We’d start to see things slow to a crawl when we had more than 12 Chrome tabs open, plus Spotify and Slack going in the background. Even then, the Aspire 5 was useable (just about), but the fans would kick in to let you know that you were really pushing it.

Chrome can be a very memory-hungry beast, especially if one of those tabs is home to a playlist, and so with just 4GB on board here, you’re going to run out of steam fairly quickly, unless you’re disciplined with your tab use.

You will be able to get away with quick photo edits (i.e. cropping, resizing, light level tweaking) here, but those middling colour scores and dim maximum brightness mean that budding snappers and photography students should choose a laptop with a better screen.

For the most part, having a few documents and spreadsheets open in Google Drive or OneNote should be fine. Just be prepared to exercise caution.

Of course, there is an 8GB model and a more capable quad-core Core i5-1035G1 available in the range which provides more firepower and memory to play with. Without having one of these on hand  to test, we can’t say whether or not it would be more adept at more complex things, like photo editing. It’s highly likely though.

The battery life of the Core i3 version is incredibly good though. Never at any point of us using it day-to-day were we worried about the power levels dipping to the 20% danger zone. Looping a film, with the brightness set to 120 nits saw the battery hold out for almost 14 hours – 13 hours and 51 minutes, to be exact.

A model with a more powerful processor would likely not be as good in the battery department – the price you pay for higher performance. And another reason why this particular model is good value for undemanding users.

To recap, you get; two Type-A USB 3.1 Gen 1 ports, one Type-A USB 2.0, one Type-C USB 3.1, one HDMI 2.0 port, and one Ethernet port. On the wireless side of things, there’s Bluetooth 5.0, which means you can connect to Bluetooth speakers over longer distances.

You also get a cutting edge 802.11ax WiFi 6. We recorded wireless speeds ranging between 576Mbps and 1081Mbps using the free WiFi Analyzer app for Windows when connected to a Netgear Orbi RBK750 router.

You won’t see those speeds yourself unless you invest in a suitable router,  though. We’ve covered the best mesh Wi-Fi kits and best Wi-Fi routers which you can read and find recommendations.

It’s also currently unavailable on Amazon UK and Amazon US, but we’re told that it will be back in stock soon.

We haven’t tested these specific models, so can’t vouch for their performance, but based on our experiences with the A514-53, we can assume that the model with the older Core i3-10110U processor will be a little less powerful, while the A514-54, with the same processor in the Dell XPS 13 9130 we recently tested will likely pack a bigger punch, which in turn will make a bigger dent in the battery.

It’s also worth reading our Honor MagicBook 14 review. For £549.99, it has a similar 14in screen, 8GB of RAM and a 256GB SSD. Its AMD processor is slightly less powerful, but the battery life is just as good and  extra RAM (and extra style) may be exactly what you’re looking for.

The Acer Aspire 5 2020 represents good value for money – if you can get your hands on one. If you’re in the market for a straightforward and inexpensive work laptop for college, university, or the office, this will do handsomely, thanks to good productivity performance, a spacious keyboard, and a powerful battery.

While the display is fine for office work, low scores for colour space mean we can’t recommend this for anything but the most basic of photo editing jobs. Video editing and anything more demanding than casual gaming is also out of the question.

Higher up in the range, prices begin to creep above the £600 mark and at this stage, the Acer Aspire 5 starts to lose its value-for-money status, especially when compared with the excellent Acer Swift 3.

Buyers on a budget will love the fact that no extra dongles or adapters are needed, and you get decent-but-not-dazzling performance. Those with more cash to burn ought to look elsewhere, so take a look at our roundup of the best laptops.