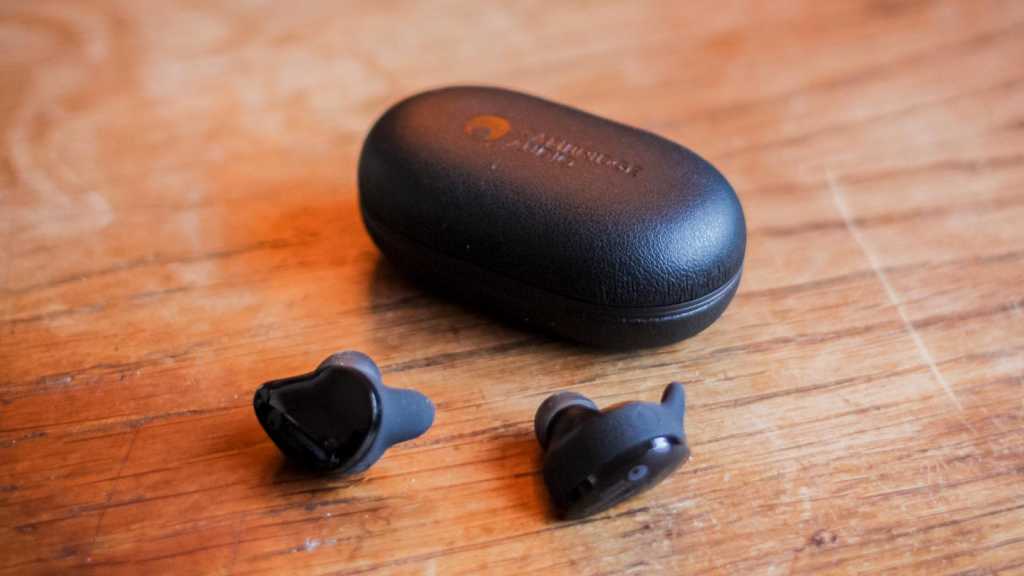 An excellent follow-up to brilliant wireless earbuds that have a lot to offer as long as ANC isn’t a must. Customisable sound and the longest battery life around are two big lures here.

Cambridge Audio crafted one of the best pairs of wireless earbuds you can get with its first attempt – the Melomania 1. Well, the firm is back with a new model, not the 2, but the Melomania Touch.

Moving on from the bullet design of the Melomania 1, the Melomania Touch have a shape similar to some rivals. They come in a shape like a comma and are fairly compact and light (5.9g each), albeit not as much as their predecessor.

Getting a good fit with wireless earbuds is more important than any other headphone style. If they don’t fit well enough, you risk them falling out of your ears. Not ideal if you’re walking home from the supermarket in the dark carrying bags (yes, this happened to me with another pair). 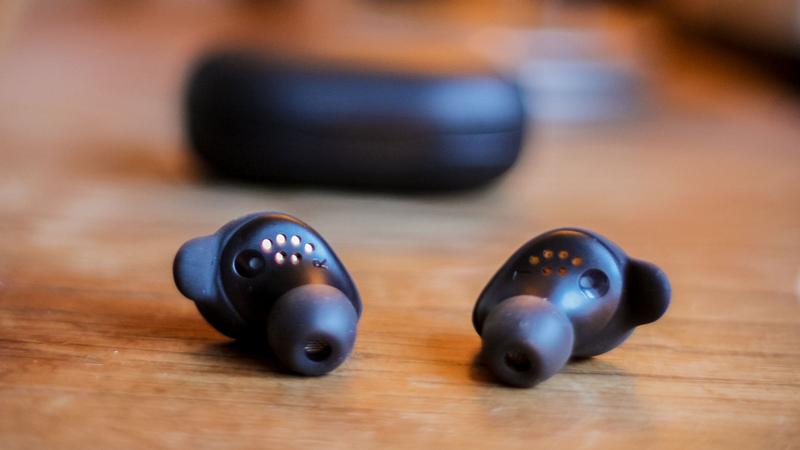 To get the best fit possible Cambridge Audio offers six pairs of silicone tips – two of each size. Then there are fins that strap around the earbud – again in three sizes. Since they are separate, unlike the Bose QC Earbuds, you can use a combination of different sizes.

This is important if you’re like me as I need the smallest tips possible, but the largest fins. With this combo, I was able to achieve a comfortable and secure fit. The earbuds would come a little loose but didn’t fall out.

Since the fin is like a rubber band that goes around the earbud, it provides a nice grip when you’re handling the headphones.

With an IPX4 splash rating, you could use these for fitness and running, although you’ll need a good fit to avoid them falling out. Build quality, as you can expect from a company like Cambridge Audio, is very good indeed.

The case is a typical pill shape and very compact – surprising when it can charge the headphones many times. More on that later. There are handy LEDs to indicate battery level, but my minor complaint about the case is that there’s no lip to help open it. It does use USB-C for charging now, though.

As the name suggests, the Melomania Touch ditch the physical push buttons of the original design in favour of touch sensitive buttons. They’re trickier to use but mean don’t end up pushing the earbuds into your ear canals when pushing buttons. 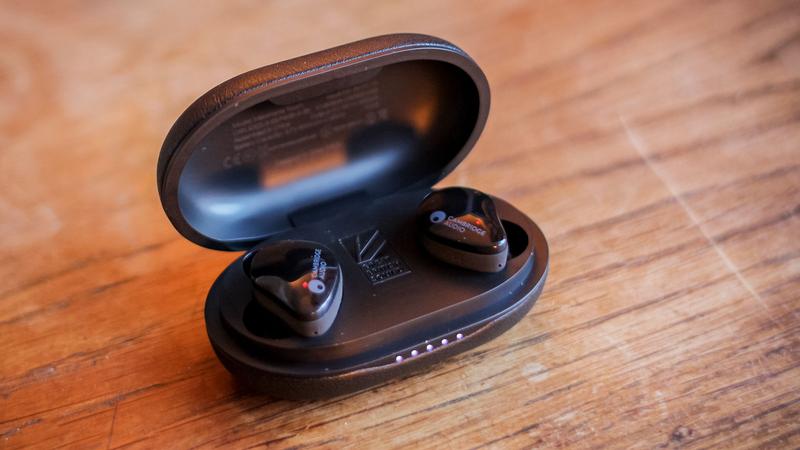 The button covers a large area of the earbud and the shape of the buds mean you can adjust them without triggering most of the time. You can do a lot including the obvious tap for play/pause and then touch and hold either left or right to adjust the volume down or up.

If you don’t want certain controls, then you can handily switch them off in the app.

The Melomania Touch are available in black or white and the case is made from vegan-friendly microfibre leather.

In terms of the core specs, the Melomania Touch use Bluetooth 5.0 connectivity and inside contain 7mm dynamic drivers with a ‘Graphene-enhanced Diaphragm’. They have a standard frequency response of 20Hz to 20kHz and use a trio of codecs: aptX, AAC and SBC.

Well, whatever the firm has done it works very well and the Melomania Touch sound very good indeed and are certainly up there with the best wireless earbuds I’ve tested over the last few years. 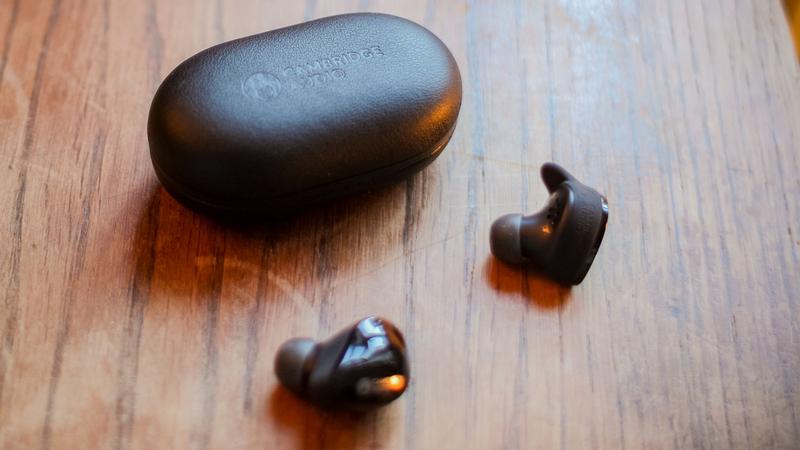 By default, they sound clear and with a nicely balanced frequency response meaning they sound great for a wide range of music and other tasks. No area is forgotten about, with strong and warm bass, rich mid-tones and a bright top end.

Even if you don’t like it, you can head into the app and go to town as I’ll explain in a minute. One thing that stood out to me is the way the Melomania Touch sound powerful without having to pump the volume up, which is great news for your ears and the war on distortion.

Note that the Melomania Touch do not have active noise cancelling (ANC) like some rivals. However, there is a Transparency Mode which uses the microphones also used for calls to allow the ambient sound into your ears.

It’s tad echoey and sounds slightly odd if you’re not used to it, but can really help if you’re out and about and don’t want to keep taking the earbuds out all the time. It’ll mean you’re aware of dangers, announcements or things like someone calling your name. And I’ve found it doesn’t impact the sound quality much at all, which is a common problem.

The nicely designed app for iOS and Android gives you a nice mix of information and controls. The main hub gives you the battery level of each bud and also lets you know which codec is being used. You can then do things like adjust the level of Transparency Mode and use a Find My Earphones feature (on a map rather than if you’ve lost them in the house).

The highlight has to be the equaliser, though, which has six different presets like Bass Boost and Rock. You can adjust the sound with the graph, with five sliders and save three different custom settings. 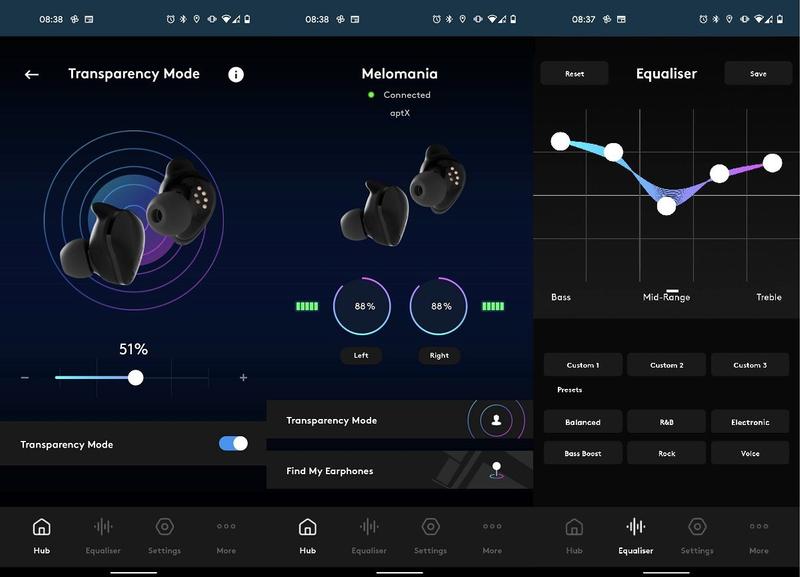 It’s excellent and even if you don’t know about EQ or frequencies, it adjusts in real-time so you can just muck about until your ears are happy.

Something I’ve not seen before is the ability to switch codes. Automatic selection will apply by default but you can go in and switch off a codec if you really don’t want to use it.

Lastly is the choice of two audio modes – high performance or low power. It’s the latter which you’ll need to use to get the longest battery life.

The Melomania Tough are on high performance by default and here you’ll get up to seven hours from the earbuds. Factor in the case and you can hit a total of 40 hours which isn’t far off the amazing  RHA TrueConnect 2 at 44 hours.

However, Cambridge Audio has gone further in low power mode with nine hours from the earbuds and a total of 50 hours. Almost needless to say, I haven’t had to worry about battery life at all during my testing.

A caveat here is that you can’t just switch between the two modes quickly. Each earbud requires a system software update which takes a few minutes and they need 30% battery to perform the switch says the app, although I managed to do it with one on around 16%.

There is a noticeable drop in audio quality when you swap to low power, of course, which is why I’d leave it on high performance (40 hours is plenty for me) unless you know you’re going to need the battery life.

At £129.95 or $149.95, the Melomania Touch are, er, a touch more expensive than their predecessor. It’s a sort of mid-range price and you can easily spend double this on some pairs of wireless earbuds.

While they are more affordable than many, the lack of ANC is more apparent now compared to when the Melomania 1s arrived. It’s far more possible to get noise cancelling at this price and there are plenty of pairs under £100/$100 with the feature that are half decent.

One example is the Huawei FreeBuds 3i with an RRP of £89 but available for £65 or you could spend a little more and get Sony WF-1000XM3 earbuds for around £140 as the price has dropped over time.

If ANC isn’t important, you could always get the Melomania 1 for just £79 now. They don’t have the same features as this new model but are something of a bargain nevertheless.

Check out our chart of the best true wireless earbuds. 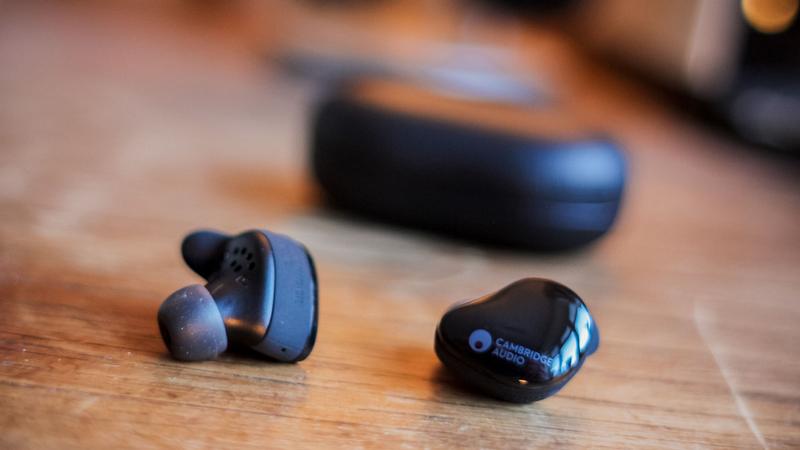 A few minor caveats aside, the Cambridge Audio Melomania Touch are an excellent pair of wireless earbuds.

Like the original, they are one of the best pairs I’ve tested but it’s a competitive market so it really depends what you’re looking for. Active noise cancelling (ANC) was rare back then but is far more common now so they don’t represent quite the same bargain.

If ANC isn’t a must then the Melomania Touch have a lot to offer. Namely excellent sound quality that you can customise with an EQ feature in the app, where there is also lots of other neat features such as codec selection and control over which touch buttons you want to use.

There might not be any ANC, but there’s a Transparency Mode which could come in useful and the design offers tips and fins making them more versatile and likely to fit better than the previous model.

You’ll also be getting the longest battery life around for a pair of wireless earbuds at up to 50 hours, although switching into the low power mode is a bit of a faff.