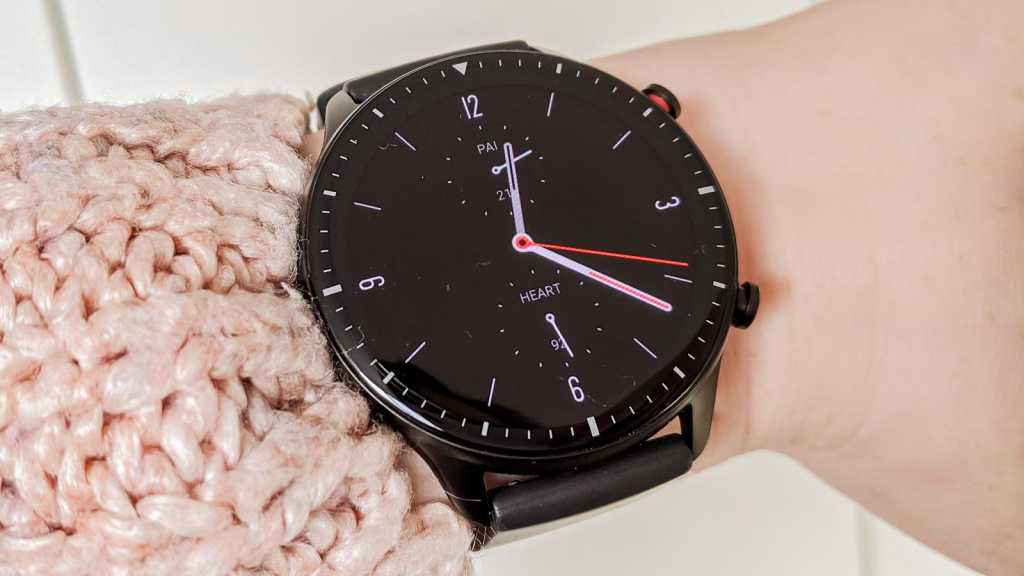 The Amazfit GTR 2 has a refined design and good tracking abilities – but the accompanying app is still lagging behind rivals.

Amazfit is a branch of Chinese wearables brand Huami. Whether or not you’ve heard of these brands isn’t important. What matters is that Amazfit is turning out some great-value smartwatches and fitness trackers for those who can’t justify spending more on a Fitbit or Apple Watch.

The Amazfit GTR 2 is a traditional-looking smartwatch which runs the company’s own custom software. This means you can’t install apps on it: you get what you get.

It can track various exercises such as swimming and cycling, as well as monitoring your sleep, heart rate and more.

The Amazfit GTR 2 has a classic watch design, with a large, virtually bezel-free, circular touchscreen. The outside edges of the watch have less of a chunky feel than the GTR did with its thick bezel, all of which makes the GTR 2 a more understated, more refined wearable.

Amazfit sent the Sport Edition for testing, which comes with a black silicone strap and an aluminium alloy case. You can also get the Classic Edition, which swaps the silicone strap for black leather and changes the casing to stainless steel. It’s more expensive, as you might guess.

Personally, I would prefer the latter’s design as a day-to-day watch, as the silicone strap just doesn’t complement most outfits and doesn’t offer a premium feel. In addition, the silicone isn’t breathable, making my arm rather sweaty after strenuous workouts, so you have to remember to take it off and dry it after intensive sessions.

Behind tempered glass is a 1.39in AMOLED display. The glass has an anti-fingerprint coating which did a good job. The screen is reasonably bright, but is very reflective when used under direct sunlight.

To navigate the user interface, you use a mix of the buttons on the outer edge, as well as the touchscreen. This is a painless experience for the most part – although it did become a little tricky after swimming due to having wet fingers.

It also has a built-in speaker for listening to music and hearing the other person on a phone call. I also managed to connect my Bluetooth headphones with the device without any issues.

The sound produced is quite punchy for such a small device, though if you move the watch certain ways, the audio isn’t as clear.

Like other Amazfit devices, the watch runs on Huami’s own custom OS, which means there’s no support for third-party apps unlike smartwatches which run Google’s Wear OS (formerly Android Wear).

All the basics are covered, including alarms, calendar, notifications, weather forecasts and extras, such as phone calls and music playback.

Of course, fitness tracking capabilities are core to any smartwatch.

In addition, you also get a choice of over 90 additional workouts, including yoga, dance, boxing and even darts. These can be added to your main workout screen for quick access, if you want to monitor a sport you take on regularly.

The Amazfit GTR 2 tracks the duration, distance, calories burned, heart rate, speed and location of each workout. If you opt for one of the 12 dedicated modes, you’ll also get more granular details, such as gradients in cycling or your average stroke rate during swimming.

Confusingly, Amazfit has used a few different apps with its smartwatches. Zepp is the latest, as the company is rebranding some of its wearables to a different name.

The main design and layout is similar to the previous app, with sections for your workouts, sleep tracking, heart rate monitoring and device settings.

The logs, however, have become more detailed. For example, in sleep monitoring there’s now a section where you can add what activity you did right before you went to sleep (such as watching your phone, or drinking alcohol), and how it left you feeling in the morning.

You can then compare this to your sleep data in previous logs and see if there’s a correlation between the two – though it’s a shame this isn’t done by the app.

Similarly the exercise logs are easier to digest, and the GPS seems a lot more accurate than the older GTR.

However, there are still issues with translation when it comes to the app, with grammar issues littered throughout the copy and no links to accredited medical pages that rivals such as Withings offer. The app is gradually improving, but still has some way to go.

The GTR 2 will auto-detect workouts so you don’t have to start the tracking manually. That’s the theory, at least, but in practice, it’s not intuitive at all and only seems to trigger quite far into an exercise. I’d recommend turning this feature off and sticking to manually monitoring your activities.

Heart rate monitoring seems to be mostly accurate and the app provides a breakdown on what ‘zone’ your BPM was in during workouts. In addition, you can manually measure your SpO2, as well as your stress levels. The former can be a little tricky to get working, but the readings I did take seemed largely normal, at around 93% on average.

It’s worth noting however that rivals such as the Huawei Watch GT 2 continuously monitor stress, which is much more useful than having to take readings manually when your emotions are high. In addition, none of these tests on the watch are accredited by a medical body as they are on devices such as the Apple Watch.

Amazfit has always succeeded in making its devices last a long time between charges, and the 471mAh cell on the GTR 2 is no exception. The company states this gives around 14 days of typical usage, and I can say after testing that the watch lives up to this claim.

It’s excellent – and besides other Amazfit products, you won’t find another smartwatch that lasts as long as this one.

If you manage to keep the watch mostly in standby mode, it’ll last an average of a whopping 38 days. If you use heart rate monitoring continuously and workout a lot, it will drain faster.

Charging takes around two and a half hours – slower than some rivals – but the long battery life more than makes up for this.

In the fitness tracker space, this is still a competitive price in comparison to rivals such as the Zepp E and more than half the price of flagship smartwatches such as the Apple Watch. However, it is a bit of a step up in price from the previous-generation GTR, which retails for around £122.99/$149.99.

This is most likely due to the inclusion of features such as a microphone and speaker. Arguably, you have to consider how much you’ll use these features. If you like to take calls on your watch, then it’s worth the extra money for the GTR 2. If not, it may be worth looking at the slightly cheaper GTR.

For a more Apple watch-esque design and a cheaper price, there’s the Huawei Watch Fit, which also features virtual built-in workouts. The battery life isn’t quite as impressive as the GTR 2’s but 12 days on average isn’t anything to sniff at all the same.

For more alternatives, see our picks of the best fitness trackers, as well as the best smartwatches to see how other rivals compare to the Amazfit GTR 2.

In most areas, the Amazfit GTR 2 is an improvement on the previous generation. Exercise tracking seems to have improved after moving to a new app, while the design changes, such as the ‘borderless’ screen, create a much better-looking device overall.

It’s not faultless – there’s no third-party app support, and the Zepp app still doesn’t quite match up to rivals. In addition, the SpO2 readings didn’t always work properly and the results aren’t accredited by any official medical body.

Nonetheless, you’d be hard-pushed to find a device with as good as a battery life as this one for this price.