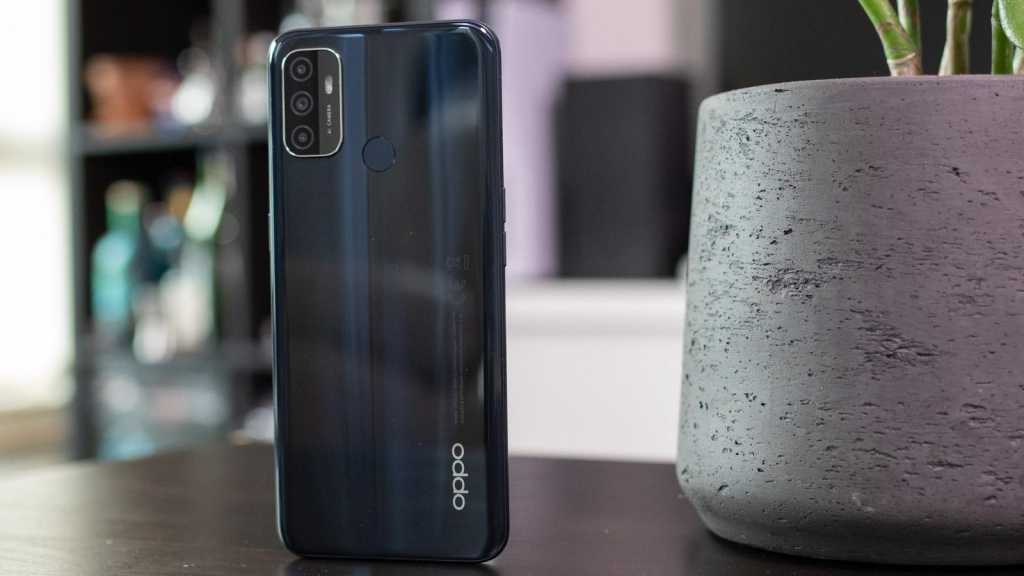 Perks like a 90Hz display and superb battery life make up for the Oppo A53’s slightly sluggish performance and an unexciting camera, and the premium-feeling design doesn’t hurt either. But if you can spend more, you should.

At £159, it’s probably no surprise to hear that the Oppo A53 isn’t an exciting phone. But it doesn’t need to be. What it is instead is an impressively competent phone – one that won’t wow you, but will deliver everything you need it to, despite the bargain basement price.

The only real challenge for the A53 is that it’s up against stiff competition, and spending even an extra £20 or £30 will deliver a solid performance boost from rivals – but if you need to make every penny count, this does the job nicely.

First up, the A53 is one of the modern wave of budget phones that really don’t look the part – by which I mean you could easily mistake this for a device worth a few times the RRP.

Available in black or a mint green, the A53 has a glossy plastic rear that’s designed to look like glass. It almost pulls off the trick, though the price you pay for that is that it’s a real fingerprint magnet, and the soft plastic has already picked up quite a few micro-abrasions and scratches over a few weeks with the phone.

The 6.5in display is large but not gargantuan, and bordered by relatively slim bezels – though there’s a bit of a bigger chin at the bottom. A punch-hole selfie camera completes the quasi-flagship aesthetic in the top-left corner.

This display is one of the A53’s strengths, as it features a high 90Hz refresh rate – still unusual in cheap phones, though getting more common. It’s not OLED of course, but the bigger tradeoff is resolution: it’s only 720p. How much that matters on a screen this size is still up for debate though, and I suspect many users will appreciate the smoothness of the refresh rate more than they would Full HD anyway.

The main design element that gives away the phone’s real price point is arguably just that at 8.4mm thick it feels a touch chunky, though Oppo has done its best to curve the edges to keep the phone comfortable to hold. At 186g it’s not too heavy either, though you wouldn’t call it lightweight.

There’s no waterproofing to speak of, but the upside of that is that you do still get a real headphone jack – increasingly rare even in budget devices, but still vital for anyone who hasn’t yet made the upgrade to wireless headphones.

Inside the phone, the price point becomes a little more obvious. At the heart is the Qualcomm Snapdragon 460 chipset, which in the UK comes paired with 4GB of RAM and a measly 64GB storage – though other SKUs are available elsewhere.

Performance is fine. The phone runs well enough, and it’s never crashed or frozen in the time I’ve been using it. Switching between apps can be sluggish, and with only 4GB RAM it can only hold one or two apps in memory at a time, slowing things down further.

I probably wouldn’t try using it for playing any games more advanced than Candy Crush either – as you can see in the benchmark results, it struggles to deliver frame rates above 30fps even in the most basic graphics benchmarks.

I worry that since the phone is a little slow now, it might become downright glacial in a year or two’s time, but longevity is always tricky to predict, and the A53 may well hold its own.

It should at least be a safe bet for battery life. The 5000mAh cell here is undeniably generous, making it one of the best battery life phones we’ve tested so far this year. I’ve been using the phone for three weeks or so, and have ditched my usual overnight charging habit – there’s just no need. I tend to top the A53 up once every few days, and don’t worry about the battery until it drops below 20%.

When it comes to charging, the 18W USB-C wired charging is among the fastest you can expect around this price, topping the phone up by about 34% in half an hour. You shouldn’t be surprised that there’s no wireless charging option though.

The camera is solid, but simple. Although there are three lenses on the rear, you only really have one to play with: a 13Mp, f/2.2 main lens. The other two are 2Mp macro and depth sensors – useful for improving your close-range and portrait shots, but not usable on their own.

In decent lighting the camera holds its own, with attractive, punchy colours and enough detail to pass muster – though the autofocus occasionally runs a little soft, leaving some shots a little fuzzy. There’s HDR support and a portrait mode too, though these are pretty par for the course these days.

As the light drops so does quality, with noticeable noise and degradation in low light shots, and no dedicated night mode to help out here. Even slightly dim lighting is enough for performance to suffer – it doesn’t have to be pitch black – but if you can live with that then this will do you well.

Funnily enough, the selfie camera is actually arguably the best of the bunch. It’s a 16Mp, f/2.0 lens, meaning it offers more detail and better light management than the rear cameras. There’s very little to complain about on this side.

Finally, in terms of connectivity you get Wi-Fi and Bluetooth 5.0, but no NFC – meaning you can’t use the phone for contactless payments. You can use the rear fingerprint sensor to unlock the device, or a less secure face unlock option.

The A53 runs Android 10 using Oppo’s own ColorOS 7.2 skin. Visually speaking this is one of the busier Android versions about – Oppo’s design language is very much its own – but in terms of functionality there’s nothing too out of the ordinary.

Buyers should expect to get an update to Android 11 at some point in 2021, but version updates to Android 12 and beyond are less likely.

The Oppo A53 launched at £159, but at the time of writing is widely available for £149, making it pretty easy on the wallet. You can buy it direct from Oppo, or from the likes of Amazon, Currys, or John Lewis. This is just about as cheap as we’d ever recommend you go on a phone – below this price you usually start to really feel the knock in performance.

If you can afford it, we’d recommend you pay a little more for the £179 Realme 7, or even the Realme 6, which is now at £159 and delivers a better camera and faster charging than the A53. At £199 the Xiaomi Poco X3 enters the picture, with a serious jump in performance.

There are better cheap phones out there, but if the Oppo A53 sits at the top of your budget then you could also do much worse.

Perks like the 90Hz display and superb battery life make up for slightly sluggish performance and an unexciting camera, and the premium-feeling design doesn’t hurt either.