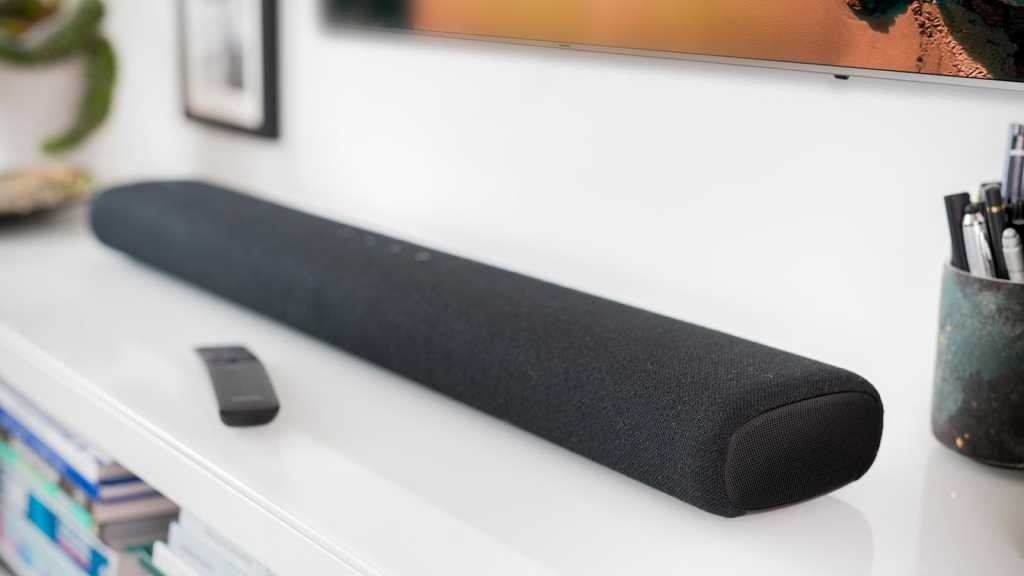 The Samsung S60T is a great looking soundbar that brings the company’s Acoustic Beam technology at a cheaper price point, but seemingly at the cost of connectivity options.

With ever-advancing audio technology and the desire to make everything smaller and better, TV soundbars can easily cost hundreds in the UK and US. It’s exciting to see the top of the range soundbars packed with premium audio technology and connectivity options, but what about those who don’t have hundreds to splash out on a new soundbar?

Samsung’s S60T looks to fill that gap, offering Samsung’s signature design and audio technology at a cheaper price point. At £399/$329 it’s still expensive, but it’s much cheaper than most popular soundbars on sale at the moment. The question is, is it worth buying? I’ve spent a lot of time using the S60T to watch TV, movies and play games, and here’s what I think.

The Samsung S60T is a good looking, compact soundbar that looks good sat in front of your TV. The all-fabric body gives the soundbar a uniform look, while the curved edges and perforated end caps help maintain the sleek, premium aesthetic. You’ll find minimal Samsung branding, and that minimal theme extends to the on-board soundbar controls, limiting you to simply adjusting volume, power and the audio source.

It measures in at a relatively svelte 764 x 68 x 125mm and should perfectly suit any TV from around the 40in mark. There’s no external subwoofer to worry about placing, which does have a knock-on effect on audio performance, but there’s no denying that it’s a simple, clean setup. It’s also available in black or silver-grey, giving you the option to choose a colour that’ll better suit the room it’ll be living in. 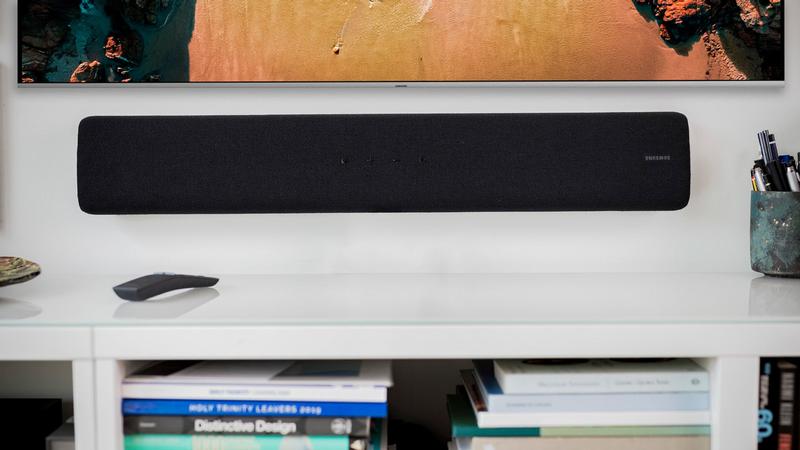 The minimalist approach extends to the display– in fact it’s so minimalist that there simply isn’t one at all, making it difficult to determine things like current volume, audio source, chosen EQ and whether the soundbar has been muted.

In the place of a traditional display is a strip of LED lights that’ll change colour and cascade in different ways to signal different actions, but I feel it’s a little counterintuitive and it makes quickly adjusting the volume near-impossible using the soundbar controls or bundled remote. I’d prefer a display built into the mesh of the speaker itself, like with the JBL Bar 5.1 Surround, providing a clean design without compromising on usability. It’s the best of both worlds, right?

With a relatively compact stature, you might be tempted to put the soundbar inside a TV cabinet – but doing so will have a big impact on the audio performance, due mainly to the combination of both side-firing and front-firing speakers, so be prepared to leave the soundbar out in the open if you do invest.

As well as on-board controls, you’ll get a relatively thin and lightweight banana-shaped remote control in the box – it might sound standard but it’s not available with the £699 Denon DHT-S516H so it’s worth appreciating. The shape does look odd at first, but it feels surprisingly comfortable in the hand. Don’t knock it ‘till you tried it, right?

Shape aside, the remote covers most bases, providing access to volume control, the ability to change the source, switch through EQs and more, and it’s powered by 2 AAA batteries. 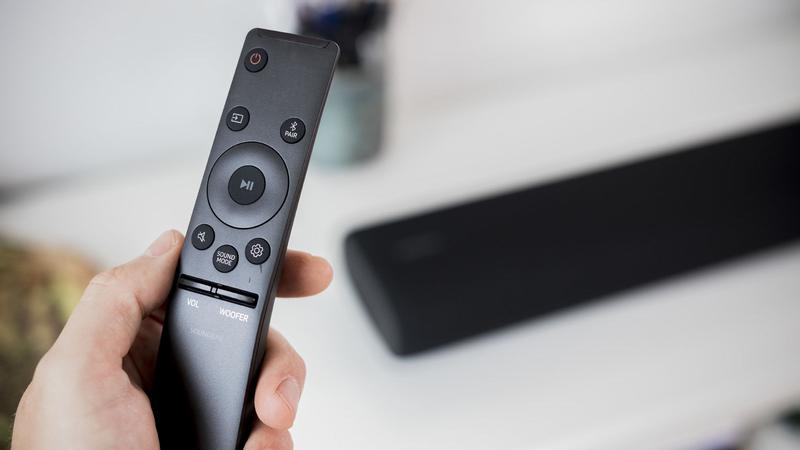 Given the price of the Samsung S60T, it is a bit of a disappointment in the audio connectivity department. On the rear of the soundbar you’ll find a HDMI ARC (not eARC) port alongside an optical port, a power port and a service port not to be used by consumers – you won’t find older connectivity options like RCA and 3.5mm here, so it’s not the perfect soundbar for older TVs.

It’s much the same in the wireless connectivity department too. There isn’t Chromecast or AirPlay support available here like with similarly priced alternatives, and while there is admittedly Bluetooth connectivity to play music from your smartphone or tablet, there isn’t aptX codec support either, so Bluetooth-streamed music may not sound quite as crisp and clear as it should.

There is built-in Wi-Fi, however, offering compatibility with Samsung’s Smart Things app for iOS and Android, allowing for more granular control over the soundbar. It ranges from basic volume controls to the ability to browse from a range of preset EQ options, but more importantly, it’s where you’ll be able to set up the soundbar’s built-in Amazon Alexa functionality. 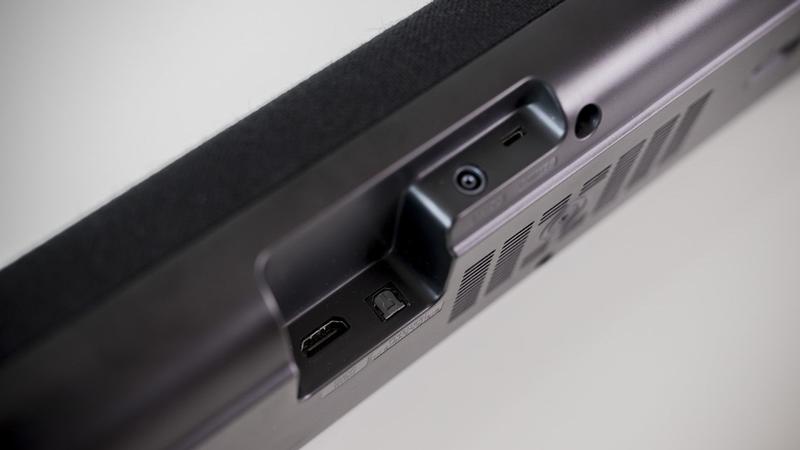 Enabling Alexa support essentially turns the soundbar into a smart speaker that can control smart home tech, answer general knowledge queries and play music via Spotify, although I must admit that the microphones aren’t quite as sensitive as those on dedicated Echo devices – or at least that’s how I found it during my tests.

The Alexa integration is a nice touch, admittedly, but it doesn’t replace the need for Chromecast and AirPlay functionality and the disappointing lack of wired connectivity options.

The Samsung S60T is described as a 4.0-channel soundbar, sporting six front- and side-facing drivers with 180W combined power behind them. You’ll also find two passive radiators to offer a semblance of bass and round off the acoustic symphony.

Samsung’s acoustic beam technology is at play here, aiming to widen and heighten the soundscape to provide something more immersive without the need for a full 7.1 surround sound system. To Samsung’s credit, it uses the side- and front-facing speakers to their full potential, with sound seemingly coming from the left and right of the soundbar, but this also means you have to keep an area in around the soundbar clear in all directions for the full effect. 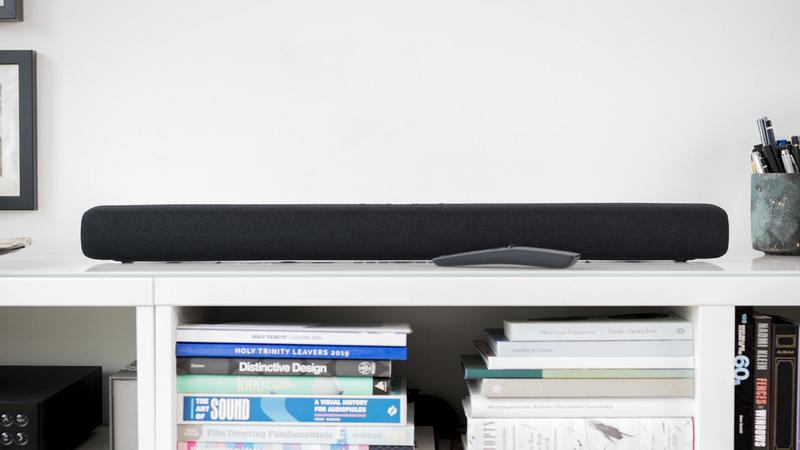 The good news is that generally speaking, the S60T performs well. The mids and highs are crisp and clear, perfect for watching TV shows, and it can handle movie soundtracks pretty well. There’s great sound separation on offer too, with the soundbar capable of handling pumping soundtracks and dialogue without muddying the waters, so to speak.

The only real downside is that the bass isn’t quite as powerful as I’d like, particularly when watching the latest Hollywood blockbuster or playing a first-person shooter and really want to feel the bass of explosions and gunfire in my chest. There are some that’ll prefer less prominent bass presence though, and for those, the S60T is a solid option.

Those that crave the extra bass do have the option of pairing the S60T with a wireless subwoofer, but you’ll have to do so at additional cost.

The Samsung S60T comes in at a cool £399/$329.99, and for that price, there’s no shortage of competition – we cover similarly priced options, like the Sonos Beam, in our best soundbar chart for those that want context.

It is a bit on the expensive side considering the lack of premium connectivity options like AirPlay 2 and Chromecast, and even though built-in Amazon Alexa support is a nice touch, it’s also available on much cheaper soundbars. There’s also the lack of a subwoofer, although that’s not always a given at this price.

However, it is one of the better-looking, more compact soundbars we at Tech Advisor have looked at, so if design is important to you, it may be worth paying the premium for Samsung’s soundbar.

If you are tempted, you can pick it up from Samsung and Currys at a discounted £299 in the UK at the time of writing, along with Best Buy at $329.99 for those in the US. 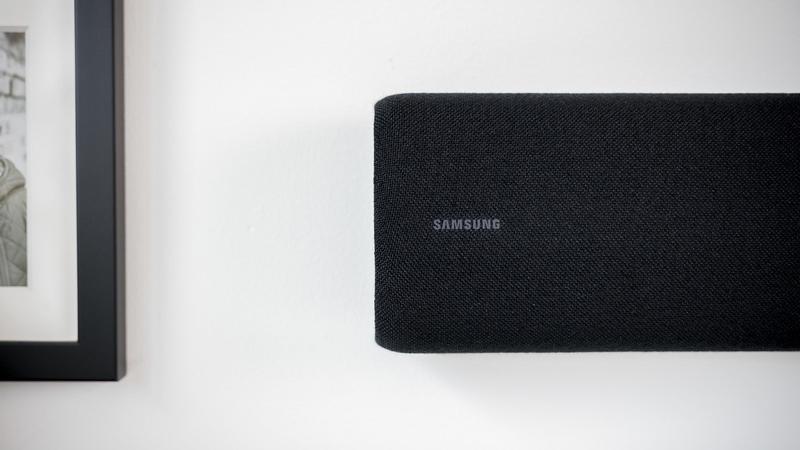 The Samsung S60T is certainly one of the better looking, more compact soundbars available right now, complete with concaved end caps, a nice wraparound fabric design and the fact it’s available in both black and silvery grey. There isn’t a subwoofer, which does have an impact on overall bass performance, but it also means the soundbar setup is much cleaner than some rivals.

It’s not too comprehensive in the audio connectivity department, featuring only HDMI ARC and Optical ports on the rear, and you won’t find premium connectivity options like AirPlay or Chromecast. Even the Bluetooth support lacks aptX support for high-res playback. It does sport Amazon Alexa support, turning the soundbar into a smart speaker that can stream music from the likes of Spotify, but this is a feature present on much cheaper options.

The side and front-firing speakers do a good job at throwing sounds around the room, and the acoustic beam technology certainly widens the soundscape for a more immersive experience too. That’s paired with crystal clear audio, but as mentioned, without a dedicated subwoofer, the bass tones leave me wanting more.

It’s a bit on the expensive side considering the features on offer, but if you want something compact, stylish and immersive, the Samsung S60T is a decent option. Besides, you can always pick up a wireless sub to work with the soundbar separately!