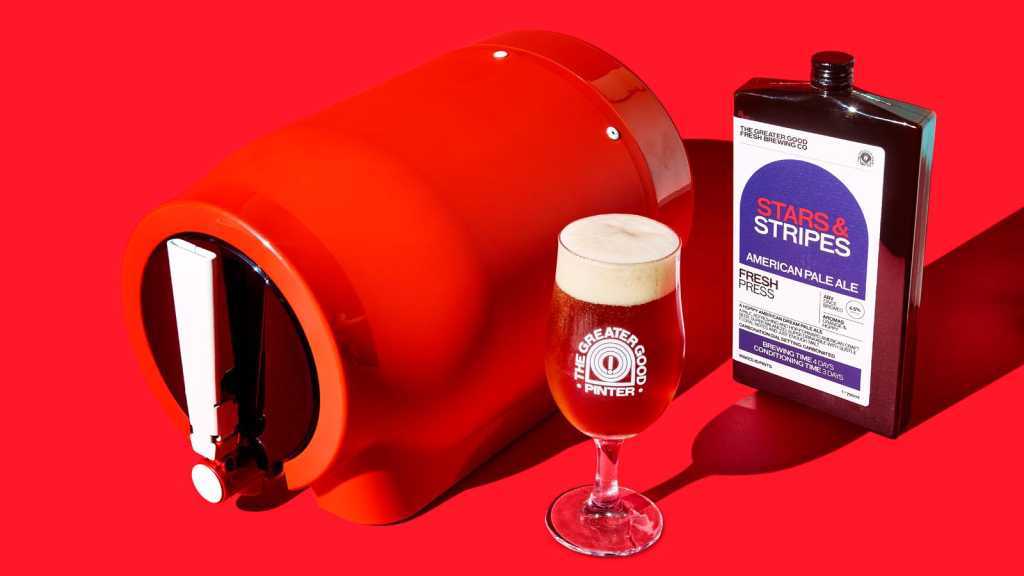 The Pinter makes it ultra-simple to make fresh beer, but brewing times are longer if you want the best taste.

Brewing your own beer at home is a niche hobby and plenty of people are put off because of the initial expense and steep learning curve. The Pinter, developed by two friends in the UK, Alex Dixon and Ralph Broadbent, aims to change all that and is unlike anything else you can buy.

The kit includes absolutely everything you need to make beer (and cider) and includes two ‘Pinter Packs’ that each make 10 pints (5.5L). The Pinter itself is a plastic gadget that does the brewing and serving all in one.

You can choose from six different colours and then add your choice of Pinter Packs from a wide selection including IPA, APA, lager, pilsner, stout and cider.

How the Pinter works

If you’re completely new to home brewing you might not appreciate quite how simple the Pinter makes the process, but it really is an innovative system.

Technically, it is very similar to the traditional homebrew kits which come with malt extract and yeast. But the hardware is the clever part: the two-piece system is used for both fermentation and serving.

It means that unlike the traditional method of using a large plastic bucket and then having to bottle your beer or put it in a pressurised keg, the Pinter does it all in one container.

The actual process is quick and straightforward. Scan the QR code or go to The Greater Good website and click on INSTRUCTIONS from the main menu. There’s now an app which makes this even more straightforward and will help you remember when you need to stop fermenting and start conditioning.

Short animations along with written instructions explain precisely what to do and how long each step will take.

First you sanitise the Pinter and dock using hot tap water and the included bottle of sodium percarbonate. This is a little tricky because the Pinter is too tall for most sinks, but it’s relatively easy to fill from a kettle or jug.

After that, you fill it again with cold tap water and pour in the ‘fresh press’, which is the pre-hopped malt extract – for beer at least, as cider doesn’t involve any hops of course.

Finally, pour in the yeast, screw on the cap, shake the whole thing for 15 seconds and then attach the dock.

The whole unit is then left upright, with the dock – which basically acts as a removable trub – at the bottom. This way, all the spent yeast (or at least most of it) gets removed from the Pinter when fermentation is complete.

Surprisingly, there’s no odour at all during fermentation and I never heard CO2 escaping from the pressure relief valve.

Once you’ve waited for the set number of days – printed on the pack – you remove the dock (above) pop the Pinter into your fridge. That’s easier said than done unless you have a very large or very empty one, and you have to leave it there for the number of days specified.

After that, remove from the fridge for serving and you can pour your first pint using the tap handle – it really couldn’t be easier.

What this all means is that you’re not really brewing the beer: you’re simply fermenting the dehydrated wort.

But unless you already know how to brew beer, or you invest more than 10x more in a system such as the Minibrew, reviewed, then you probably don’t want to get involved in the actual brewing process anyway.

Who is the Pinter for?

This does raise the thorny subject of exactly who the Pinter is aimed at. Ralph and Alex at The Greater Good say it’s for anyone who wants to make fresh beer at home. There’s a secondary motivation too: the environment.

Plus, you’re getting the freshest possible beer which always tastes better than months-old beer in cans or bottles on supermarket shelves.

How does it taste?

That’s the big question of course. Is the beer from the Pinter any good? I ‘brewed’ the Stars & Stripes APA and the Lockwood Pilsner and the results weren’t bad at all.

Both beers were perfectly drinkable, although it would be going too far to say they tasted better than what you can buy from your local supermarket shelf or bottle shop. They were fresh, obviously, but not necessarily as enjoyable as your favourite beer from a can or bottle.

The main reason for my disappointment with the Stars & Stripes was that it didn’t taste distinctively like an American pale ale. It was much more like a traditional English ale, being very malty and only slightly hoppy.

The pilsner was truer to type, and although I could taste a little diacetyl (which introduces a buttery flavour), it didn’t detract too much from the lager, and carbonation was nice and strong.

The first pours for both beers were exceptionally foamy but the second pint poured as you’d expect, with a more sensible head. Initially both beers were hazy, but became clearer the longer I left them.

The official line is that the beer stays fresh for about three weeks, which should be more than enough time to drink all 10 pints.

Is it really as fast to brew as the claims?

There’s no magic going on here, and no shortcuts to brewing good beer. So the claims of taking just a few days to turn what drops through your letterbox into great beer are certainly overstated.

Flip over a bottle of fresh press and you’ll see a recommendation to ferment for a couple of days longer and condition for quite a bit longer, especially the pilsner. If you want to stick to the shorter fermentation and conditioning times, you’re compromising on taste for faster results.

And you’re better off fermenting for longer than even the longest times advertised, especially with the more alcoholic options such as the DIPA: Space Hopper.

The range from £10 for the Cloudy Nine Cider to £15 for the stout and pilsner and £16 for Space Hopper.

That means it’s £1 to £1.60 a pint, which is way cheaper than any pub and compares favourably to supermarket ‘craft’ beer. Of course, this doesn’t account for the cost of the Pinter itself, which is £85, and includes two beers (20 pints) that you choose for the bundle.

This means the first two packs work out at £4.25 per pint.

Subsequent Pinter Packs are then much cheaper per pint. The range has expanded a lot in the past six months to include a sour, wheat beer, double IPA and a Californian lager.

The packs are designed to fit through your letterbox, so you don’t need to be home when they’re delivered.

Talking of delivery, the Pinter and the Packs can be shipped only to the UK (including Northern Ireland) at the moment.

If you want to be able to more quickly brew more beer before the existing batch is drunk you can now buy a ‘Co-Pinter’ – just the Pinter itself with no dock. These cost £45 each.

There’s no reason why you couldn’t use the Pinter to brew your own beer, except that you’ll void the warranty if you do so. If you have the know-how and extra equipment, you can source your own malt and hops and pour the wort into the Pinter once cooled down to room temperature.

The ~5.5 litre (10 pint) capacity is ideal for experimenting,  but you won’t be able to check gravity without removing the dock which is relatively costly in the amount of liquid it contains if you’re removing it multiple times. (Or you could buy a Bluetooth hydrometer…)

The Pinter is a genuinely brilliant device and it really does allow anyone to make beer at home without the risk of having to pour gone-wrong beer down the drain.

As long as you’re not expecting the kind of quality beers you can get from supermarkets these days (for me that’s Vocation’s Life & Death and Wiper & True’s Milk Shake Stout) then you’ll likely feel quite smug when your Pinter is ready to tap, especially when you can share it with like-minded friends.

Just remember to add a few extra days of fermenting time and you’ll get great results.