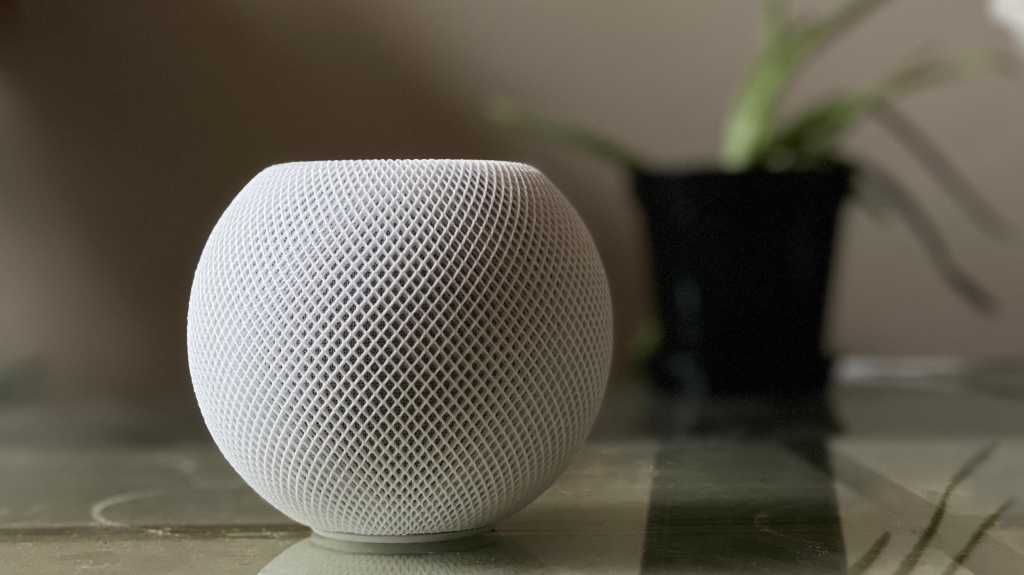 The HomePod Mini excels in the audio department despite its small stature, but it falls over in terms of connectivity – not just the smart devices it can control, but the smartphones and services it’s compatible with.

Apple is in the midst of a mini revolution, launching not only the iPhone 12 Mini but the HomePod Mini at its ‘Hi, Speed’ event in October 2020. Though the HomePod Mini is spectacularly small at just 84mm tall, it’s just as smart as its bigger sibling, and the sound quality is incredible considering its small form factor.

But, as we all know, Siri isn’t quite up to competing with Google Assistant and Amazon Alexa, so is the HomePod Mini really worth investing in? I’ve spent a few weeks using the HomePod Mini, and although it’s not the perfect option for everyone, there’s certainly a lot to love if you’re already heavily embedded in the Apple ecosystem.

Apple’s option, then, is much more conspicuous than the competition, allowing it to disappear into the environment it’s sat in until it’s needed.

But even with all that being said, it’s still a shock just how small the speaker is when you see it in real life – especially when you consider the impressive audio chops, but I’ll get to that a little later.

Size aside, the HomePod Mini is a largely circular smart speaker with the same textured covering found on the regular HomePod, bringing a nice level of synchronicity to the system if you’ve already invested in a HomePod or two.

One area where the two speakers differ is on top; while the standard HomePod features a small display for displaying colours and media controls, the HomePod Mini features a plastic top surface with an embedded pulsing white LED to indicate music playback and Siri functionality.

It’s technically a downgrade, but one that I haven’t found to be bothersome in day-to-day use – even though the materials used are different, it functions in the same way, using touch input to pause or play music and adjust the volume.

The HomePod Mini was initially available in black and white, but the company expanded the collection and announced three new colours – yellow, orange and blue – at its October 2021 event.

Although it looks like it’d be a great portable speaker, it requires a power supply to function. At least there’s a power brick in the box, something that can’t be said of much of Apple’s current offering!

It’s no secret that Apple’s virtual assistant, Siri, isn’t quite as capable as Amazon Alexa and Google Assistant on the smart speaker front, but the tide is changing – albeit slower than some Apple fans might like.

Siri is now better equipped to handle general knowledge requests as well as the ability to control any Apple Home-enabled smart accessories. It’ll be able to answer those random burning questions at 2am, send texts from your iPhone, handle music requests and if you ask Siri to show you a photo of something (a bit of an odd request given the HomePod Mini doesn’t have a display), it’ll send it to your iPhone.

Like with most smart home tech, it doesn’t always work, but it was fairly consistent with its smart functionality.

The Home compatibility isn’t quite as wide-reaching as Google and Amazon’s options, but if you’ve got a bunch of accessories that you already use with the Home app on your iPhone, chances are you’ll enjoy being able to control your smart accessories with your voice.

It offers support for user-created Shortcuts too, making it easier to control entire groups of smart devices at once. The ability to say “Hey Siri, goodnight” and have my TV and lights turn off and the sound of rain come through my speaker is a novelty I won’t be getting over, that’s for sure.

Though the HomePod range still doesn’t have a drop-in feature like Amazon’s Echo range that allows you to talk directly to others in the home, it does now offer the ability to send announcements not only to other HomePods, but iPhones, iPads and every other Apple device in the house. It makes getting everyone together for dinner much easier, but there are still times where I’d prefer to directly connect to a single speaker than bother everyone in the whole house just to ask for a cheeky cup of tea.

Whether summoning Siri or making an announcement, the beamforming microphone technology is reliable, always triggering at the correct time – even with music playing. There’s no need to pause between saying the wake word and your request either, you can simply say “Hey Siri turn on the lights” at once and it’ll wake and run the command simultaneously.

The main focus for the HomePod Mini, much like the regular HomePod, is music playback. That’s best experienced with an Apple Music subscription, with you able to request specific playlists or tracks from your library using Siri and keep them ‘loaded’ for playback later on.

If you’ve got a compatible iPhone, you can even hold an iPhone playing music via Apple Music next to the HomePod Mini to pass playback to the speaker, and it works vice-versa too. It’s a bit gimmicky, for sure, but there are times in the past few weeks when I’ve done exactly that when entering the room while listening to music on my iPhone.

The Apple Music integration does make it much easier to listen to music on the fly, and the integration with iOS is as tight as you might imagine, but that makes it all the worse that it isn’t compatible with other popular streaming services like Spotify and YouTube Music.

It does look like times are changing though; Apple announced integrated Pandora support for the HomePod range and the door is open for other developers to add support, so that could change soon. I really hope it does, because although I can still play music from Spotify using AirPlay, it’s nowhere near as convenient as built-in integration.

It’s at this point that I should point out that Wi-Fi-connected AirPlay is the only way to connect to the HomePod Mini if you’re not planning on listening to music via Apple Music – there’s no 3.5mm input or Bluetooth connectivity on offer. For those unfamiliar, AirPlay is technology only supported by Apple products.

Compound that with the fact you need an iPhone or iPad to set up the HomePod Mini, it’s safe to say that the HomePod Mini is a bad choice for Android users. That’s a bit of a shame considering the great audio quality and design on offer, but it’s not exactly a new concept from Apple is it?

While the HomePod Mini may not be as smart as similarly priced counterparts, the speaker truly excels in the audio department, especially when you consider its incredibly small dimensions. It’s easier to justify sub-part audio on a small entry-level smart so it’s nice to see the HomePod Mini bucking the trend. It’s not quite to the level of the standard HomePod of course, but it’s a much closer match than I’d ever anticipated.

There’s a level of clarity on offer that is unmatched by similar-sized speakers, and that’s evident in just about every track played. Whether I’m listening to classic tracks like The Animals’ House of the Rising Sun or classical tracks like Jessica Curry’s All the Earth, the mids and high-end are crisp and clean, producing detail easily lost with cheaper speakers.

There is a noticeable level of bass to go along with those rich, warm vocals, but it’s not the same thundering bass presence that you’ll find on the regular HomePod. The rounded bass tones are prominent enough for casual listening, but it’s only when you switch back to a regular HomePod that you realise just how much more bassy playback could’ve been.

That’s not to say the HomePod Mini sounds flat or tinny though – quite the opposite. It does the most it can with the bass presence available, it’s just that it wouldn’t be my first choice of a speaker to use to play Dubstep at a house party for example – whenever those become a thing again, anyway…

The HomePod Mini generates an impressively wide soundscape, throwing audio in every direction, although it doesn’t have the ability to automatically adjust the EQ depending on where it’s placed – that’s exclusive to the more expensive HomePod for now.

Still, even without the smart tech, the wide soundscape and impressive overall volume mean that it’s more than enough for a casual listening experience when working, playing games or reading a book.

That experience is elevated even further when pairing two HomePod Minis for stereo playback.

Doubling up not only allows the pair to handle left and right channels independently, creating a more immersive experience when properly placed, but it provides true room-filling audio too. I’d go as far as to argue that the stereo performance is reason enough to ditch your existing Mac speaker setup and using two HomePod Minis in its place – as long as you’re happy to use AirPlay, anyway.

If you’re looking for a small, good-looking speaker setup that produces much better sounding audio than it should be able to, the HomePod Mini is a solid option.

The HomePod Mini originally cost £99/$99, but it saw a £10 price drop in the UK in late 2021, bringing the price down to £89. That’s in line with the fourth-gen Amazon Echo, and I don’t think I’m alone in admitting that I expected it to cost a little more when it was first revealed in October 2020. Apple does tend to add a premium onto its products after all, but it’s clear with the HomePod Mini that Apple simply wants to get this into the homes of as many Apple users as possible.

The HomePod Mini is worth the price if you’ve got an iPhone, an Apple Music subscription and plenty of Homekit-supported accessories, but it does lose a bit of its magic if you primarily use Spotify and use smart home tech that isn’t compatible with Apple Home, of which there is admittedly a lot.

If it is up your street, you can grab the HomePod Mini directly from Apple alongside retailers like John Lewis in the UK and Best Buy in the US. For more smart speaker inspiration, take a look at our pick of the best smart speakers.

The HomePod Mini may be small in stature, but it’s big in sound. Despite its small dimensions, the HomePod Mini has impressive audio chops that easily beat similarly priced speakers from Google and Amazon with crisp, clear mids and highs and decent bass presence, albeit not quite as powerful as its larger, premium sibling. That effect is only improved by pairing two HomePod Minis together, producing room-filling audio with no hint of distortion at any volume.

There’s an obvious focus on audio performance with the HomePod Mini because, like the regular HomePod, Siri isn’t quite as capable as Google Assistant and Alexa. Apple has made strides with wider support for smart home accessories, better general knowledge query handling and the introduction of an announcement feature to send a message to all HomePods and Apple devices in the home, but it’s still lacking in some areas.

The most limiting factor of the HomePod Mini, aside from the fact you need an Apple Music or Pandora subscription to get the easiest listening experience possible, is that it only offers AirPlay connectivity – a feature exclusive to Apple devices.

This makes the HomePod Mini essentially useless if you’ve got an Android, as you’ll need an iPhone or iPad to complete the initial setup at the bare minimum. It’s great for Apple fans, then, but Android users should probably consider something from Amazon or Google for a better smart speaker experience.