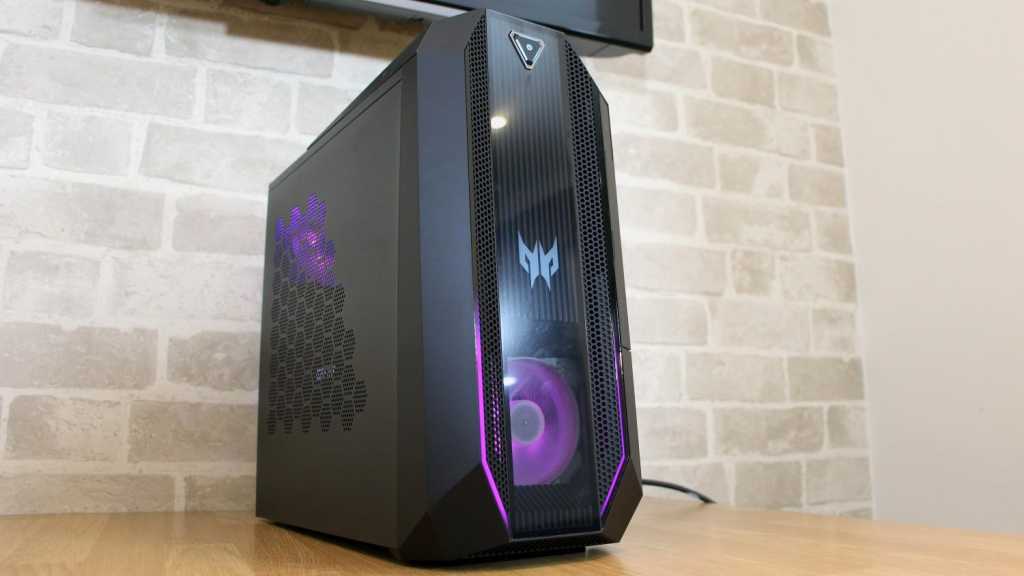 The Acer Predator Orion 3000 is a compact, sturdy system with enough power to handle mainstream games, but it’s outpaced and out-featured by rivals that don’t cost any more.

The Acer Predator Orion 3000 is a new big-brand gaming desktop, and it’s always easy to look at these machines cynically – too often, machines from big companies are expensive and underpowered when compared to rivals from local experts.

The Acer Predator Orion 3000 has a decent external design. The front panel has a good-looking slate of tempered glass with an RGB LED fan, two streaks of matching light and vertical slabs of mesh. It looks just as good as the systems from boutique builders. The triangular power button has RGB LEDs too, and a replacement side panel with tempered glass is included in the box.

The impressive aesthetic is bolstered by good build quality – the side panels, front panels and roof are strong. There’s a handle on top, and the rig is just 392mm tall and 175mm wide. That’s small by gaming desktop standards and it means that this PC is easy to carry to LAN parties and friends’ houses.

The front of the case has single USB 3.2 Gen 2 Type-A and Type-C ports, and two audio jacks, but they’re hidden behind a flimsy door. There’s a headphone holder, too, but this is also far too weak.

There’s not much to shout about on the inside, either. As usual with big-brand gaming PCs, nothing has been done here to aid aesthetics – the Orion 3000 serves up bare metal and untidy cabling. There’s a single drive bay and two spare memory slots, but that’s it in terms of upgrades.

The Predator Orion 3000 has a couple of key rivals. The Asus ROG Strix G15DH is another big-brand option, and it’s worse than the Acer – larger, heavier, and less attractive. The PC Specialist Magma R2 is bigger than both but far better, with neater building, and many more upgrade paths.

Need to pair this PC with some comfortable furniture? Check out our best gaming chair chart.

An Nvidia GeForce RTX 2060 sits inside the Acer Predator Orion 3000’s UK model – the one I’ve tested. It’s a standard version of the GPU, which means it’s got 1,920 stream processors and 6GB of memory alongside Ray Tracing ability.

In the US, this machine costs $1,399 and uses the RTX 2060 Super, which upgrades with 256 more stream processors and two extra gigabytes of memory.

Intel’s Core i7-10700 is the entry-level Core i7 part from the Comet Lake range, but it’s still got eight Hyper-Threaded cores alongside base and Turbo speeds of 2.9GHz and 4.8GHz. There’s 16GB of memory clocked to a middling 2,666MHz, and a 512GB Western Digital SN530 SSD paired with a 1TB Toshiba hard disk. Connectivity is decent – there’s Gigabit Ethernet and dual-band WiFi 6 (11ax).

The motherboard is an Acer-made model with Killer Ethernet and decent DTS:X Ultra audio, but there’s no other special features and no upgrade opportunities beyond the spare memory slots and the SATA ports needed for the drive bay – no extra PCI sockets and no second M.2 connector.

At the rear, it’s got four USB 3.2 Gen 2 ports and two USB 2.0 ports, but only three audio jacks. The PSU is mediocre, too: while it does have an 80Plus Gold efficiency rating, it’s not modular.

The Asus ROG Strix G15DH has a similarly barebone specification, but the PC Specialist Magmar R2 is better, with a feature-packed motherboard, faster memory and a quicker SSD.

Despite all of this, there’s solid gaming power from the RTX 2060 inside the Acer Predator Orion 3000. In Far Cry New Dawn at 1080p and Ultra settings the Acer averages 88fps, and in Wolfenstein: Youngblood the Acer runs at 121fps. There’s enough pace here to game at 1440p, too – it runs those titles at 71fps and 57fps at that higher resolution.

It bodes well for all sorts of real-world gaming situations: the Acer plays any top-end single-player title at a smooth 60fps on 1080p and 1440p displays with virtually no graphical compromises, and it runs eSports games easily on 144Hz or even 240Hz gaming monitors.

It’ll run games on some widescreens, especially if they’re lower-resolution models or if you dial back their settings. It’ll only struggle on the largest widescreen panels, and it won’t play games at 4K smoothly at all. You can get that sort of performance with a newer Nvidia GeForce RTX 3000-series card, but your PC will be far more expensive.

The PC Specialist matches the Acer Predator Orion 3000 for price, but it includes an RTX 2060 Super with more stream processors and two extra gigabytes of memory. That PC ran through 3D Mark Sky Diver with a score of 44,126, which is easily quicker than the 40,177 delivered by the Acer.

In Wolfenstein the PC Specialist’s 1080p score of 144fps is far better than the Predator, and the PC Specialist was a little slower than the Acer in Far Cry at 1080p but quicker at 1440p. Expect those better results from the US version of the Acer, too, thanks to its RTX 2060 Super card.

The Acer Predator Orion 3000’s Intel chip is no slouch – this PC will scythe through games, day-to-day computing, and photo-editing, and it’ll handle mainstream video-editing too. However, AMD’s Ryzen chips are better in most content-creation and productivity workloads, and in multi-tasking.

If that’s important to you, then an AMD Ryzen 7 CPU is a better option – and you could spend more and get even more power from a newer AMD Ryzen 5000-series chip.

The Acer Predator Orion 3000 is a middling thermal performer. Temperatures are never an issue, and the Predator is not loud when playing mainstream games – the fan noise is easy to mask, even with modest speakers. If you run tougher games, though, there’s noticeable high-pitched noise that can be irritating. The PC Specialist was consistently quieter.

The three I’ve mentioned here are available on the Acer UK store, along with a model that includes an RTX 2060 Super, but I can’t recommend buying directly from Acer – the prices are far higher than those you’ll find elsewhere.

Two models will be sold in the US. The nearest equivalent to the machine I’ve reviewed matches its specification but upgrades to an RTX 2060 Super, and it costs $1,299. There’s a machine with an RTX 2070 Super and 32GB of memory that will cost around $1,699 when it launches.

One thing to bear in mind here: the Acer only has a one-year warranty. That’s a fine deal for a big-brand gaming PC, but systems from companies like PC Specialist tend to use more generous three- or five-year packages.

The Acer Predator Orion 3000 does have solid selling points. It’s small, robust and has a handle, so it’s ideal for LAN parties and it looks great, too.

In the UK the RTX 2060 provides ample 1080p, 1440p and eSports gaming speed, and in the US the RTX 2060 Super version is a little quicker. The Intel CPU is a solid chip for everyday computing and content creation and there’s decent memory and storage.

As usual, though, this big-brand box does have downsides. More graphics and processing power is available elsewhere at similar prices, and the motherboard, PSU and interior are underwhelming if you care about that stuff. If you’re interested in upgrading or chasing framerates, you’d be better off looking elsewhere.

Nevertheless, the Acer Predator Orion 3000 is a reasonable option if you want a sturdy, small and unfussy machine for mainstream gaming and frequent transport.