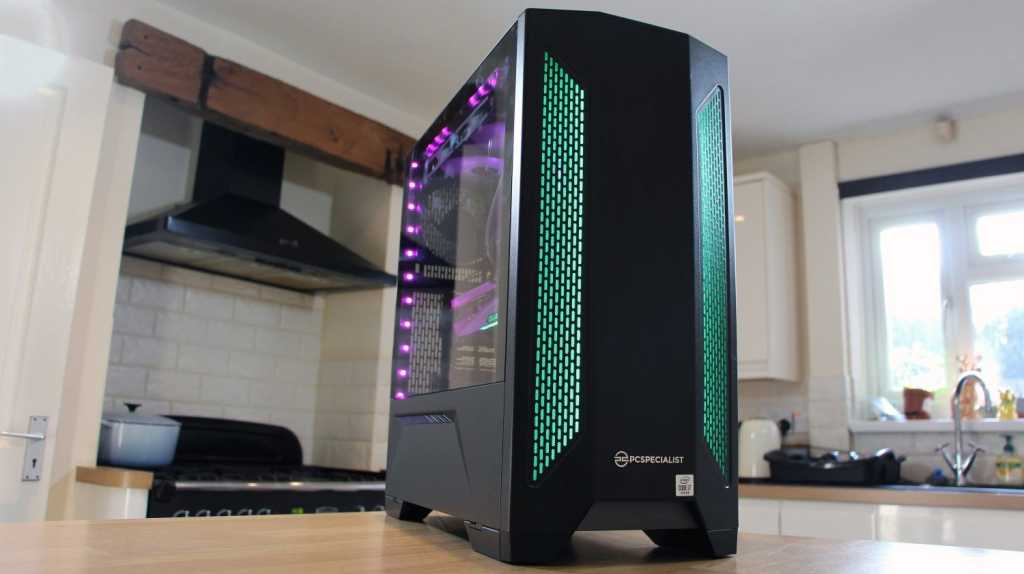 The PC Specialist Obsidian I serves up unrivalled gaming power with a solid specification, a great case and a keen price – it’s excellent. If you need more processing ability, though, an AMD CPU will be better.

The PC Specialist Obsidian I is the first review system to arrive at Tech Advisor with an Nvidia GeForce RTX 3080, and this fearsome Ampere GPU is paired with an Intel Core i7-10700KF processor, a super-fast SSD and loads of RGB LEDs.

Surprisingly, the PC Specialist Obsidian I only costs £1,899. That’s still a huge amount to spend on a PC, but it’s relatively affordable considering the sheer performance on offer – especially when you consider that a PC like this can keep you gaming smoothly for years.

The high-end hardware is packed inside a Lian Li Lancool II. It’s a bold, impressive case – the front panel is dominated by strips of mesh that are illuminated by RGB LEDs, and both sides have tempered glass panels on hinges – which makes it easier to get inside. There are buttons on top of the chassis to alter the lighting, and build quality is tremendous: the glass, metal and plastic are rock-solid.

The lower thirds on both sides of the case are covered with sleek metal shrouds. They’re hinged, and flipping them down reveals some extra features, like hard disk and SSD mounts. They’re a smart addition, although those hinges are the only weak point in this case – they’re a bit too flimsy.

PC Specialist has done a good job on the interior. At the front, the cabling is neat, with easy access available to the components, and the tidy cabling at the rear is paired with metal covers that keep everything obscured. The Lancool has magnetic dust covers, three 3.5in hard disk caddies, and 120mm intake and exhaust fans. There are only minor issues: there’s no USB-C, those hard disk caddies don’t have tool-free installation, and the 240mm PC Specialist FrostFlow CPU cooler blocks the top of the motherboard.

These problems are all manageable, and this interior is far better than the case provided in the rival Alienware Aurora R10 system – that chassis is ugly, untidy and has fewer upgrade options. You also get a better warranty with the PC Specialist – it’s a three-year deal, while the Aurora only included a year of coverage.

If you need peripherals, head here for the pick of the best gaming mice.

The star of the show here is the Nvidia GeForce RTX 3080. The new Ampere architecture delivers smart upgrades to rasterization and CUDA cores, and it upgrades the RT and Tensor cores – the bits of the card that make Ray Tracing and DLSS work.

Those improvements translate to fearsome numbers: this new card serves up a monster 8,704 CUDA cores, 10GB of dedicated memory and a throughput of 29.77 TFLOPS – compare that to the 2,944 cores, 8GB of memory and 10 TFLOPS of the preceding RTX 2080. The PC Specialist’s card is made by Gigabyte, and it’s been overclocked too – the original boost speed of 1,710MHz has been improved to 1,800MHz.

The GPU is joined by an Intel Core i7-10700KF. It’s an eight-core processor with Hyper-Threading and the Intel Rocket Lake architecture, and it has decent base and boost speeds of 3.8GHz and 5.1GHz.

There’s 16GB of dual-channel memory, and there’s a 1TB Samsung 970 Evo Plus SSD and a 1TB hard disk. That SSD delivered read and write speeds of 3,549MB/s and 3,144MB/s, which are superb. The Corsair RM750x PSU is good, too: it’s modular, powerful and has an 80 Plus Gold efficiency certification.

Everything connects to an Asus ROG Strix Z490-F Gaming. It’s a good motherboard: it has two spare memory slots, a free M.2 connector, and decent ALC1220 audio. It pairs these conventional features with some future-proofed additions, like rapid 2.5Gbps Ethernet, an extra four-pin CPU power connector and an on-board Thunderbolt header.

At the rear, it’s got eight USB ports, including a Type-C socket. There are only a handful of disappointments: the reliance on Intel hardware means no PCI-E 4 support, dual-graphics isn’t an option, and there’s no super-fast USB 3.2 Gen 2×2. Wireless internet is also missing, and PC Specialist’s included single-band 802.11n wireless card is outdated and disappointing.

Nvidia’s new card delivers stupendous speed. I ramped Wolfenstein up to 4K and with Ultra settings and the PC Specialist romped through with an average of 158fps – and a stunning minimum of 123fps. In the trickier Far Cry New Dawn when running at 4K and Ultra settings, the Obsidian still averaged 96fps. Theoretical tests highlight the power on offer – the RTX 3080 scored 66,765 in 3D Mark Sky Diver, which is more than 10,000 points beyond the nearest challenger.

There isn’t much you can’t do with this PC. It’ll play today’s top titles at 4K at butter-smooth framerates – and tomorrow’s games, too. It’ll handle widescreen displays and VR headsets, and esports titles at the speeds required for 240Hz and 300Hz monitors.

Conversely, if you’re only looking to play games at 1080p, or if you only want to play mainstream esports, then you don’t need to buy the RTX 3080 – it’s overkill.

The processor is fine – easily good enough for gaming, mainstream work, photo-editing and esports streaming – but it can’t compete with AMD. In Geekbench, for instance, it scored 8,871 – a solid result. But a comparable CPU like the AMD Ryzen 7 3800X is marginally faster, and the Alienware’s Ryzen 9 3900X scored beyond 10,000 points.

The Obsidian is a good thermal performer – even in the toughest tests it only produced a subtle fan rumble, and a headset or speakers will easily mask it. The components are never too hot, either.

Check out some other options in our best gaming PC chart.

The PC Specialist Obsidian I costs £1,899, which is excellent value when compared to rivals. The Alienware Aurora R10 is the Intel-based version, and it’ll cost you a whopping £2,449 for a specification that mirrors the PC Specialist – and in a PC that can’t match the Obsidian when it comes to features.

And, as ever, PC Specialist’s rig can be fully customised – handy if you want to upgrade some areas of the system or save some cash by cutting back elsewhere.

Check out our chart of the best gaming PCs to see what else there is to choose from.

Elsewhere, the rest of the components are fine – if not ground-breaking – and the case is sturdy, good-looking and tidy.

If you’re searching for a high-end gaming system at a good price, the PC Specialist Obsidian I is a fantastic option. I’d only advise you look elsewhere if you need to handle work tasks, too – because an AMD processor will be better.