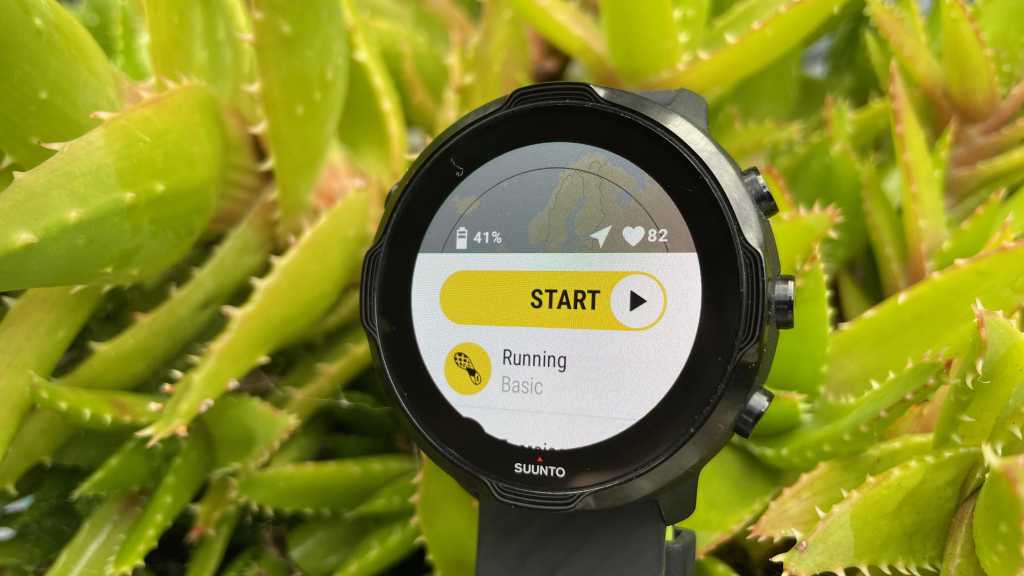 The Suunto 7 is a capable outdoor-focused smartwatch with great exercise tracking capabilities, but it is on the expensive side for what’s on offer.

While Finnish fitness company Suunto has been producing running-focused smartwatches for some time, the Suunto 7 marks the first time the company has adopted Google’s Wear OS over its own proprietary operating system. That makes the Suunto 7 an interesting prospect: it features all the exercise smarts you’d expect from a Suunto wearable with the added ability to use it as an everyday smartwatch, complete with third-party app integration.

It’s certainly a good-looking smartwatch, but is there enough on offer to tempt you away from premium options like the Apple Watch Series 6, Fitbit Sense and Samsung Galaxy Watch? Carry on reading to find out.

The Suunto 7 sports a rugged, outdoor-sy look that should appeal to hikers and other fitness fans, but despite this, it still manages to look sleek on the wrist. That’s mainly down to the fact that it’s thinner than many outdoor-focused smartwatches like the Casio PRO TREK, and at 70g, it’s not the heaviest wearable on the market either. In fact, with it being available in five colour options, it’s more fashion-focused than much of the GPS running watch competition.

It features a metallic rim around the display alongside three crown buttons on the right and one more on the top-left, and while that may seem like overkill, the buttons serve a purpose: access to key functions without having to use a touchscreen. 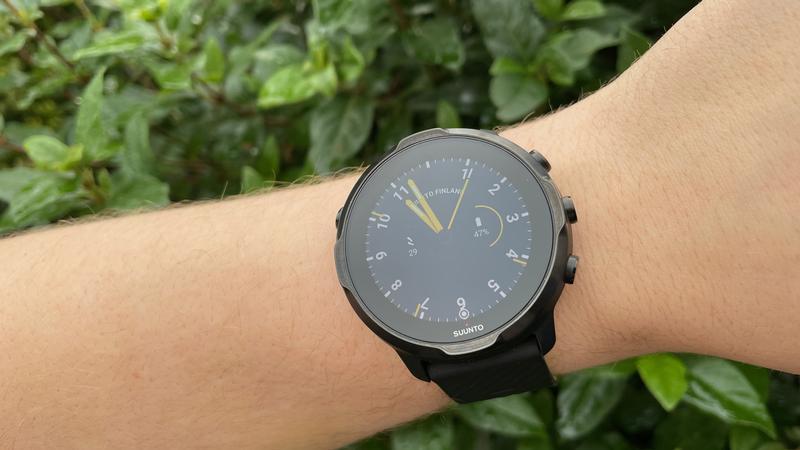 That’s incredibly handy during winter months when you’re likely wearing gloves during outdoor workouts. It’s easy not only to start, pause and stop workouts but you can also perform functions like control music playback entirely via the physical buttons. It’s a nice touch, allowing you to perform actions without having to actually look down at your wrist, and shows real attention to detail when it comes to the exercise experience as a whole.

The 24mm silicone strap offers a snug, comfortable fit, and the durable nature of silicone means it’s ideal for use in workouts too. You’ll even be able to quickly rinse down the watch and strap post-workout with built-in 5ATM waterproofing, and it’s also capable of operating at temperatures ranging from -20°C to 50°C, making it a truly durable outdoor-focused smartwatch.

The durable look extends to the AMOLED display, coated with Corning’s Gorilla Glass to protect it from everyday knocks. The 454 x 454 1.39in circular display is bright, detailed and large enough to see key fitness metrics at a glance while working out. Even bright sunshine isn’t much of a worry for the Suunto 7, with me able to see the display clearly in just about any scenario.

Though there are plenty of watchfaces on offer from the Suunto 7, the one that’ll likely get your attention – at least initially, seeing as it’s the default – is the heatmap watchface. It’s unique to Suunto wearables and utilises anonymous data from its community to show where it’s most active at any given time. 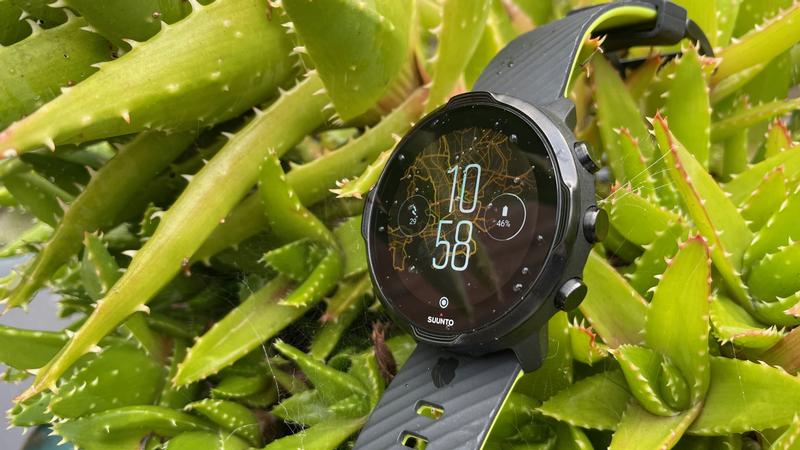 It’s eye-catching, but there’s much more to it than that; it also allows you to see popular routes around you. If a route is a dark browny-orange, it’s likely you won’t bump into anybody else on your workout, but if it’s a brighter orange-yellow then you’ll likely see a lot of other fitness fans on your journey. Busier routes are likely to be the best routes, making it an invaluable discovery tool if you visit different locations to work out.

The heatmap is set for runners by default, but there are modes for walkers, cyclists, swimmers, off-road bikers, skiers and more, and it’ll update the heatmap whenever it’s connected to a charger and Wi-Fi.

And, of course, there are plenty of other watchfaces available to choose from if the heatmap doesn’t suit your aesthetic.

The Suunto 7 sports Google’s Wear OS, bringing a wealth of features not found on many fitness-focused smartwatches including full third-party app support, allowing you to download apps directly to the watch and expand its functionality beyond exercise tracking. You’ll find apps like Citymapper to get you around when you’re not running or cycling, and the dedicated Outlook app allows for easy access to your emails.

You’ve also got the other added benefits of Wear OS, including notification support, the ability to control music on a connected device, access to Google Assistant and a wide range of watchfaces to utilise too.

You’ve also got Google Fit, enabling everyday fitness tracking, taking note of calories burned, exercise minutes, hours stood and other data to give you a general overview of your fitness, but it’s Suunto’s dedicated exercise app that truly shines through. It makes Google Fit look like an app for babies. Y’know, if babies did exercise…

With a press of a side-mounted button, you’re taken to the Suunto app. Once you’ve set your profile up and synced your watch with the Suunto app for iOS and Android, you’re free to choose from a range of tracked exercises ranging from standard options like running and cycling to more niche exercises like trail running and skiing. 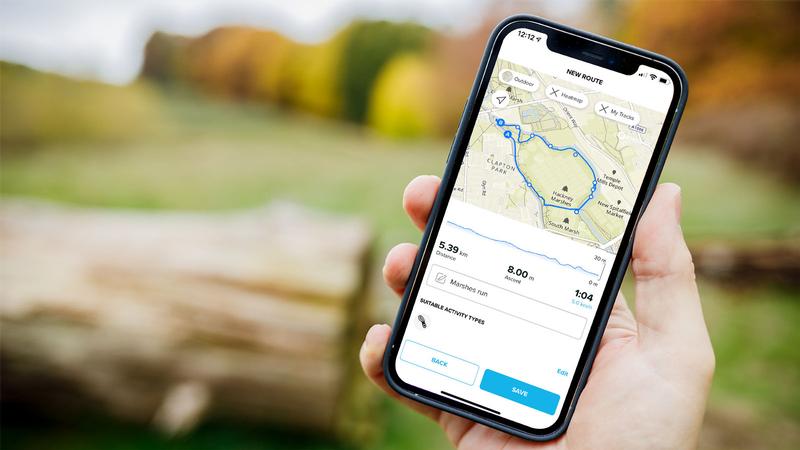 Unlike other smartwatches, the Suunto 7 allows you to manually design your own routes via the companion app. It’s refreshingly simple too – simply tap on the displayed map to set your start and end points and either let the app calculate the easiest route automatically, or edit the route yourself. You’ll see a summary of distance, elevation and other key stats in the planning stage, and you can overlay the heatmap mentioned earlier to see popular exercise routes in your local area.

Once you’re ready to exercise, it’s as easy as swiping across the display. Once active, you can use the physical side-mounted buttons to change the UI, change your music, pause or end your workout and even mark manual lap times, pretty much negating the need to use the touchscreen during a session.

The most crucial metrics are displayed during the workout, and you can get a much more detailed breakdown either via the watch or Suunto app once completed – and it’s here that you’ll really be able to get into the nitty-gritty of the data collected. 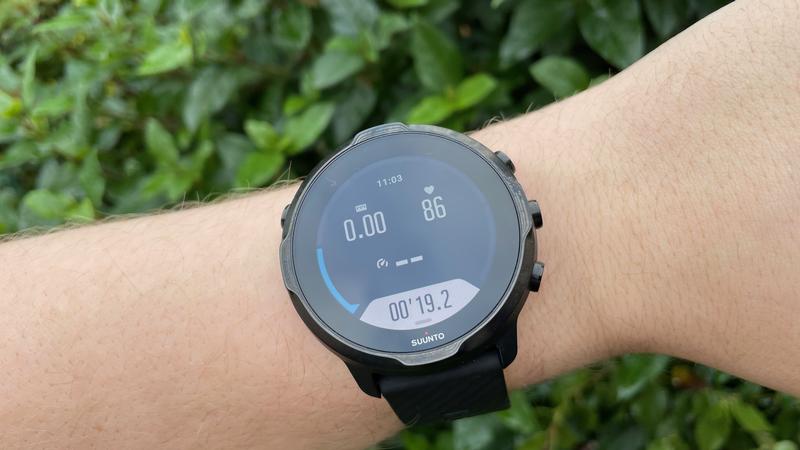 It’ll vary depending on the exercise you undertake, but when running, you’ll get standard metrics like total distance, calories burned, heart rate data alongside more advanced data like PTE and EPOC. You’ll even be able to see your progress via the app, with your workout metrics displayed in chart form, giving you a look at how you’ve improved over weeks and months – a much-requested and relatively recently added feature, but great to see, nonetheless.

The results are impressively accurate down to the inclusion of built-in GPS, allowing for precise exercise tracking even when not connected to a smartphone, and you’ll find an optical heart rate monitor too. Though it’s difficult to test its accuracy, I can say that the Suunto 7 aligned metrics recorded from an Apple Watch Series 4 during an outdoor run, and the GPS heatmap matched my route exactly.

It is worth mentioning that unlike other dedicated fitness watches, you can’t pair the Suunto 7 up with a chest strap HRM, which could be a dealbreaker for more dedicated athletes.

For most of us, though, the Suunto 7’s tracking is more than accurate enough to give you an idea not only of how you’re performing right now, but how you’re improving along the way.

Though battery life will largely depend on how you use the smartwatch, I found the Suunto 7 would last around a day and a half before needing a top-up – although the company claims you can squeeze 2 days out of it at a push. That includes regular notification checking, tracking an outdoor run with GPS enabled and using the watch to control music playback too.

That’s a little bit better than what you’ll get from an Apple Watch Series 6, but there’s a key difference here: the Apple Watch Series 6 offers always-on display functionality, or at least a version of it, while the Suunto 7 has a raise to wake feature enabled by default. That means the screen will be completely black most of the time, with a flick of the wrist needed to wake it up.

That’s not as bad as it could be with reliable wrist-raising detection, but it certainly doesn’t have the finesse as an always-on display, and it doesn’t offer true multi-day battery life as a benefit. For context, the Fitbit Sense lasts over six days and features a similar setup to Suunto’s option.

When the Suunto 7 does need a top-up, the proprietary charger snaps into place thanks to built-in magnets, and it’ll provide a full 0-100 percent charge in around an hour and a half.

It doesn’t quite have the same finesse in the design department, but if you’re a keen outdoor runner, there’s a lot to like about the Suunto 7 – especially when it comes to custom route tracking and the ability to control most aspects of fitness tracking by physical buttons, negating the need to remove gloves on cold winter runs to interact with the watch.

To see how the Suunto 7 compares to the competition, we outline the best smartwatches and best fitness trackers in more detail separately.

The Suunto 7 is a great all-weather GPS smartwatch designed for the outdoors, but despite the rugged look, it’s actually quite thin and lightweight. In fact, with five colour options available, I’d go as far as to say it’s borderline stylish. At the centre you’ll find a 1.39in AMOLED display that’s bright, detailed and doesn’t struggle in direct sunlight – although that just makes it all the more disappointing that the two-day battery life isn’t tailored to always-on functionality.

It runs Google’s Wear OS, making for a great overall experience complete with a range of third-party apps available to download on the standalone Play Store built into the watch. It uses Google Fit for everyday fitness tracking, but it’s Suunto’s own exercise app that’s most impressive.

It boasts unique features like the ability to design custom routes to run along via the Suunto app, and the inclusion of four side-mounted buttons that control just about every aspect of exercise tracking means you won’t need to raise your wrist and use the touchscreen to interact with the watch during workouts.

Pair that with accurate tracking and a bevvy of stats to delve into, either on the watch or on the accompanying app, and you’ve got a great GPS running watch.

It is on the expensive side though, and considering there are GPS smartwatches that last 5+ days on a single charge, I’d have liked to have seen better performance on the battery life front. But still, at 1.5 days, it’ll likely be enough for the average consumer.