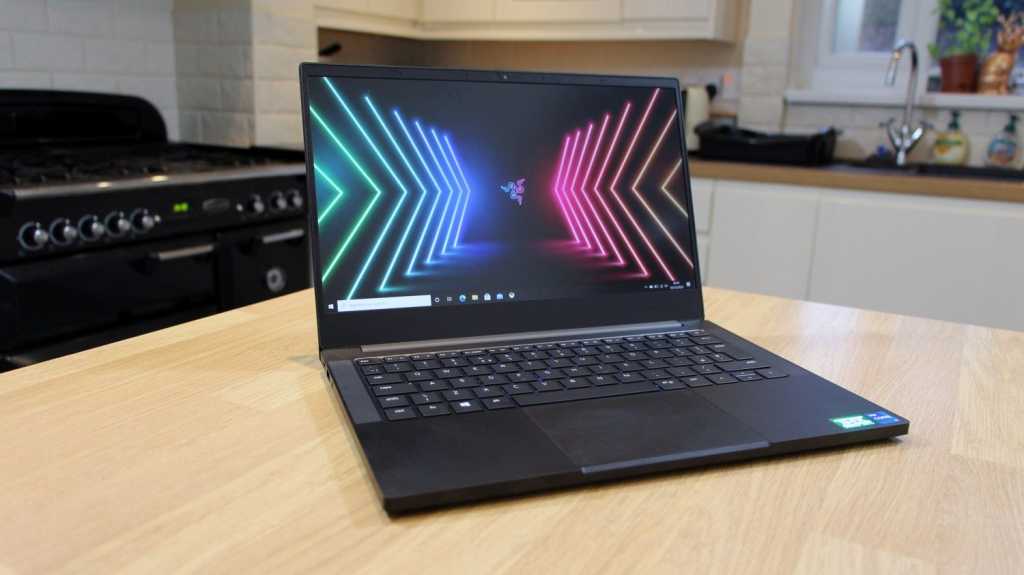 The latest Razer Blade Stealth 13 offers impressive mainstream gaming power inside a light, slim and sturdy case with a top-notch 1080p screen. However, the price along with a few caveats might make you look elsewhere.

The Razer Blade Stealth 13 is the smallest gaming laptop from one of the biggest brands, and it’s long been an intriguing option for portable gaming – because high-end hardware and slimline laptops don’t often mix that well.

As GPUs have become more efficient, though, lightweight gaming laptops have become more feasible – and Razer bolsters the latest Blade with an upgraded 11th-gen Intel Tiger Lake processor, too, hence the ‘late 2020’ tag.

The Razer Blade Stealth 13 looks fantastic – because it’s effectively a larger Razer laptop that’s been shrunk down. That means an all-aluminium body with a matte black finish and a glossy, dark Razer logo on the lid.

It’s classy and more discreet than the Asus – that laptop looks great, too, but it’s more ostentatious thanks to its extra venting and angles. The only issue is the Razer’s edges, which can be sharp.

The Razer’s mature look is paired with tremendous build quality – it’s rock-solid. It’s all the more impressive when the Blade’s 1.41kg weight, 16mm depth and 306mm width are considered – the Asus is heavier, thicker and wider.

The Razer has two USB-C ports that support Thunderbolt 4 and charging, which means you can power the Blade from both sides. Beyond that, connectivity is underwhelming – there are two full-size USB 3.1 ports with a modest maximum bandwidth of 5Gbit/s, a headphone jack, and that’s it.

There’s no card reader, wired networking or HDMI output so you’ll have to rely on a USB-C hub or dock for those.

Elsewhere, the Razer has a 720p webcam with Windows Hello support, and internal connectivity comes from dual-band Wi-Fi 6 (11ax). It’s easy to remove the base with a Torx screwdriver, and the NVMe SSD and wireless card are both accessible, but the memory is soldered.

The Asus doesn’t have a webcam or Thunderbolt, but it does have a memory slot, an HDMI output and faster USB-C ports.

The Razer Blade Stealth 13 has a chiclet keyboard without a numberpad. It’s got a decent layout – the function row has media, brightness and backlighting options, the cursor keys have been slimmed down to accommodate a bigger right-shift button, and there’s a double-height Return key.

The buttons are crisp and consistent, but they’re shallow and push down into a robust base. For everyday typing they’re fine, although after long sessions the base can feel uncomfortable. For gaming, the lack of travel and feedback means the buttons feels flat – they’re fine for casual, mainstream and slower titles, but the Asus provides more travel and a more satisfying experience.

The keyboard has some minor issues elsewhere. While it does have RGB LED backlighting, it’s single-zone lighting not per-key illumination as you might expect at this price. The power button sits on the keyboard, which could prove irritating.

The trackpad is absolutely fine: big, smooth and accurate, with fast, clicky buttons. As ever, though, a gaming mouse is better for gaming.

The Blade Stealth 13 is one of the smallest laptops with a 120Hz display – the ROG Zephyrus G14 has one too, but that panel is 0.7in larger. The Razer doesn’t have syncing, but the triple-figure refresh rate is high enough to deliver smooth gaming in single-player titles and mainstream eSports games.

The Blade’s brightness level of 354 nits is good enough for any indoor situation and for some outdoor scenarios, and it combines with a decent black level of 0.29 nits to create a contrast ratio of 1221:1. That’s good for an IPS screen, and it creates a well-balanced display: there’s great vibrancy without oversaturation, and darker areas have decent depth.

The excellent Delta E of 1.2 ensures top-notch colour accuracy. The colour temperature of 5,981K is a little warm, but it doesn’t cause problems. And, while the Razer’s display handles a solid 94.2% of the sRGB gamut, it cannot handle the DCI-P3 or Adobe RGB colour spaces.

For gaming and media playback, the Blade’s display is great – smooth, accurate and bright, with a resolution that won’t overly tax the GPU.

The speakers are positioned either side of the keyboard and are reasonably loud, with a crisp, clear high-end. The mid-range is a bit muffled and there’s not much bass, but they’re serviceable for casual and mainstream gaming.

The Razer Blade Stealth 13 deploys an Nvidia GeForce GTX 1650 Ti Max-Q, which is a mid-range mobile chip with cut-back clock speeds of and 4GB of memory. It’s the bare minimum I’d expect in a gaming laptop these days. It’s joined by an 11th-gen, quad-core Intel Core i7-1165G7, 16GB of dual-channel memory and a 512GB Samsung PM981 SSD that’s very quick.

The GTX 1650 Ti is reasonable for mainstream gaming. In Far Cry New Dawn it averaged 84fps at Medium settings, and it handled Wolfenstein at 55fps. When I turned the settings up to Ultra it played Far Cry and Wolfenstein at 38fps and 48fps, although in Far Cry the minimum dipped below 30fps.

Positively, the Razer is able to play most single-player games at good framerates – you’ll only have to dial back the settings in the toughest titles, or if you want to get the framerate closer to triple figures. This laptop will also handle any popular eSports title at beyond 100fps.

Compared to other GPUs, though, the Razer’s graphics hardware is a little underpowered. The GTX 1650 Ti scored 19,857 in 3D Mark Sky Diver, but the full-power laptop GTX 1660 Ti is almost 10,000 points faster – and the RTX 2060 found in the Acer Predator Helios 300 scores 34,000 points. You’ll see huge improvements from those alternatives – think 20fps gains or more.

Intel only has an advantage in single-threaded benchmarks and, even then, the margins are slim. Disappointingly, the Razer’s Core i7 CPU is throttled in this slim machine – its Turbo peak is rated for 4.7GHz, but it ran at around 4GHz during easier tasks and around 2.5GHz in tougher benchmarks. Unfettered, the i7-1165G7 could score beyond 5,800 points in Geekbench, but that’s not possible here, and it still wouldn’t overhaul AMD’s silicon.

So, where does this leave the Razer in real-world terms? It’s no slouch – it’ll handle day-to-day computing, web-browsing, Office applications and photo-editing, and it won’t bottleneck games. But if you want to handle tougher tasks, AMD is a better bet. And, bear in mind, that AMD’s faster Ryzen 5000-series laptop chips will launch in early 2021.

Razer’s Synapse software has a performance mode that can eke more speed out of this machine. It improved the Sky Diver score to 22,567 points, but only delivered a couple of extra frames in games. Better gains came in Geekbench, where the Razer’s score jumped to 5,352. It doesn’t change the CPU hierarchy, but it does deliver extra pace.

Impressively, the Razer doesn’t exhibit major heat or noise problems. During gaming, the fan noise is noticeable but modest – consistently quieter than the Asus. On the outside, the underside gets warm but not uncomfortable. The downside, of course, is CPU throttling.

Razer’s machine delivers mixed battery life. During gaming, it’s conventional – I only got two hours from this notebook. During less-demanding tasks the Razer is better – it lasted for nine and a half hours during a 720p video playback test at 120 nits and just under eight hours when working.

It’s not widely available so apart from the official store, your main options are eBuyer – who kindly supplies the review sample – and Amazon.

All of these machines are more expensive than Asus ROG Zephyrus G14 machines with the GTX 1650 Ti, and those laptops also come with a better AMD CPU. The G14 with a Ryzen 9 4900H processor and RTX 2060 graphics is more expensive, but still a little cheaper than the Razer.

The late 2020 edition of the Razer Blade Stealth 13 brings a huge amount of quality to the ultraportable market.

There are compromises throughout, though. The Razer only has good battery life when it’s not playing games, and its Intel CPU is fine – but handily beaten by AMD. The keyboard is too shallow, and physical connectivity is underwhelming. It’s also extremely expensive.

If you do want decent gaming power inside a high-quality chassis, then the Razer will be absolutely worth the money. But I think it’s just too expensive considering the numerous compromises – and when compared to the rival Asus, which offers comparable gaming grunt and more CPU power inside a cheaper machine that’s barely any bigger.