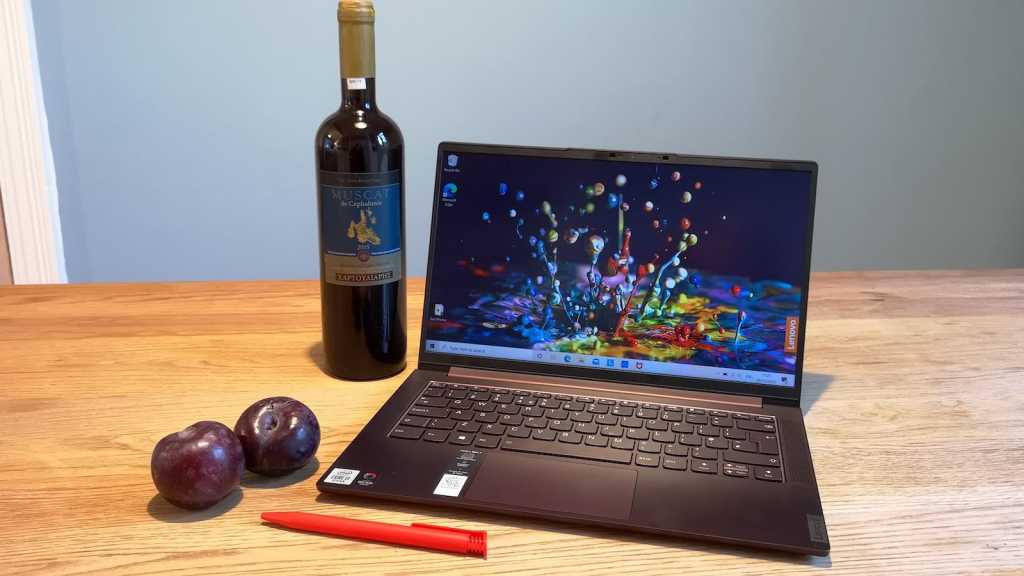 The Lenovo Yoga Slim 7 is light, powerful, stylish, and versatile, and it doesn’t cost the earth. Relatively low storage, which won’t be a dealbreaker for everyone, and slightly questionable build quality are the only real downsides. Otherwise, the Yoga Slim 7 is an excellent choice.

Unavailable, look for Yoga 7i

The Lenovo Yoga Slim 7 range features a number of models powered by either Intel’s 10th-gen Core processors, or AMD’s Ryzen 4000 series APUs. Available to buy now, it follows in the footsteps of last year’s Lenovo Yoga S730, but it’s not a direct successor to that laptop.

Designed for mobile workers, the Lenovo Yoga Slim 7 gives you get plenty of ports for your money, as well as the latest Wi-Fi 6 radios for fast connectivity. Dolby Atmos-tuned speakers mean for those times when you’re not working, you can enjoy superior stereo sound when streaming movies and TV shows.

Finally, while the Lenovo Yoga Slim 7 is not a fully tricked out gaming laptop, or a heavy-duty machine designed for video editing, you do have the option of picking up models with dedicated Nvidia MX graphics processors, which will give you a boost in these departments, and allow for faster photo editing.

There is some confusion around the name as there’s both a Yoga Slim 7 and a Yoga Slim 7i. The latter is for Intel processors but many retailers are just calling it the 7. Even our review sample with Intel has a sticker that only says ‘Yoga Slim 7’.

The Lenovo Yoga Slim 7 is a very nice-looking laptop. As the name implies, it’s a lightweight laptop aimed at people who work on the move, people who need something that can be quickly slipped into in a bag or case as they dash between meetings.

Instead of the usual boring black and silver colour options, here you can choose from sandblasted metal jackets in gunmetal green-grey ‘Dark Moss’, a rich wine/dark purple ‘Orchid’, or a slate grey textured fabric option, er, ‘Slate Grey’. I took a look at the Orchid colour. 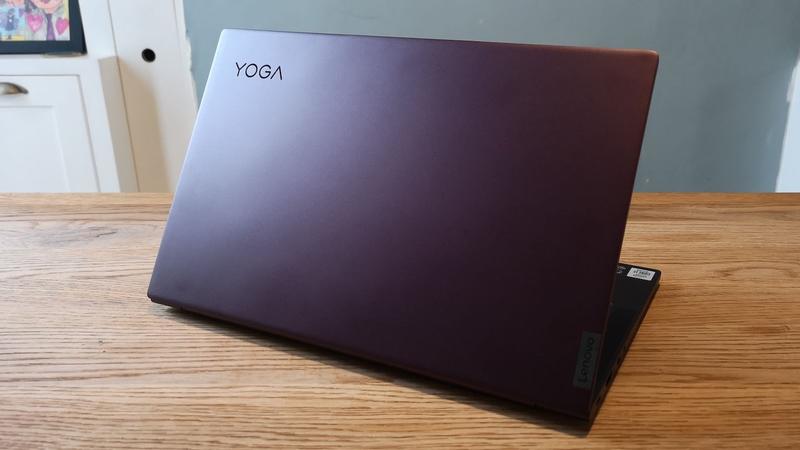 The Lenovo Yoga Slim 7’s 14in display is framed by very slim bezels (3mm on the sides, 7mm on the top) which really makes the display pop out, and adds to the overall pared down and slender look. One of the tiniest 720p HD camera sensors I’ve seen sits top and centre.

The wide hinge allows for the Yoga Slim 7’s screen to be easily adjusted, although there’s a fair bit of wobble here. On the underside, rubberised feet lift the rear end of the deck up off of the desk slightly, allowing warm air to be pushed out of the vent by the twin fans.

Note that while this is a Yoga product, the Slim 7 doesn’t have a 360-degree hinge to rotate the screen fully around, enabling different usage modes. The display does fold completely flat to a desk, though.

The keyboard is typical of the kind you see on Lenovo laptops, featuring the same curved keycap shape that you’ll see here, and on creative convertibles like the Lenovo Yoga C740 and budget gaming laptops like the Lenovo IdeaPad Gaming 3i.

The keys fire back quickly, and the keycaps are nice and wide. Even if you have huge Jack Reacher-style supermarket chicken-sized hands, getting acquainted is no problem. The keycaps do feel a little thin, which makes me wonder how they may withstand a year or two of typing.

The Enter key also had a habit of getting caught against the deck when firing back up, which may not be a good sign, or it could be an issue specific to the unit I was sent. 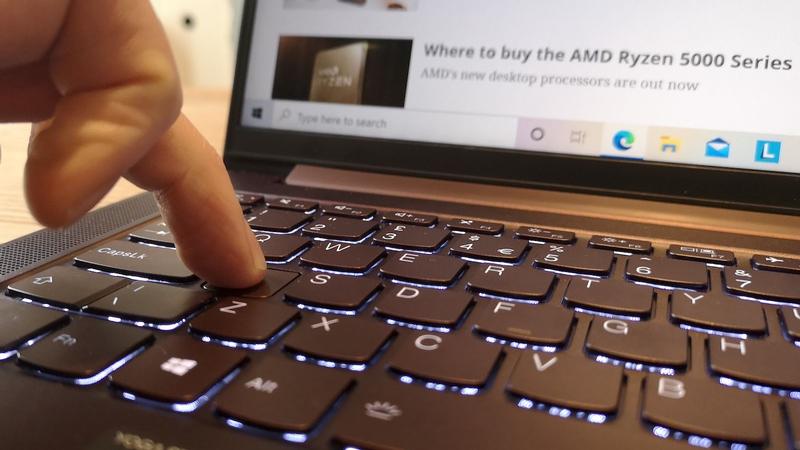 Holding ‘Function’ and tapping the space bar lets you toggle the keyboard’s backlight. The arrow keys are squashed in together in the bottom right, and also double up as ‘Home’, ‘Page Up/Down’, and ‘End’, again, when you hold down the ‘Fn’ key. It’s not ideal but also not uncommon.

Flanking the keyboard are two micro-drilled grilles covering a pair of 2W Dolby Atmos-tuned speakers – more on these in a moment. There’s even room for voice assistants Cortana and Alexa to hitch a ride here, if you’re in the market for a laptop you can use to control your central heating and smart lighting.

Out of the box, the plastic-coated trackpad on the review sample was not very responsive at all, but luckily pushing the sensitivity to the max and increasing cursor speed solved this. It’s not as fluid-feeling as, say, a MacBook Air’s trackpad of course, but it’s serviceable. 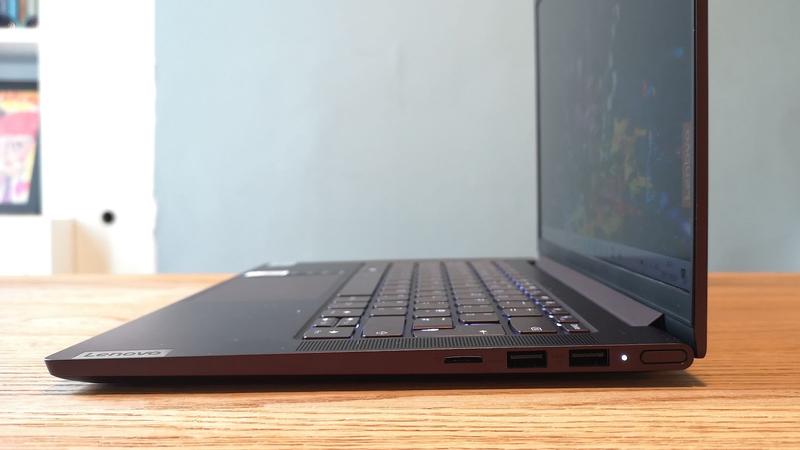 The lack of a fingerprint scanner is a noticeable absence here. The 720p HD camera does, at least, you unlock the Yoga Slim 7 and sign in to your Microsoft Account with Windows Hello facial recognition, if you want added protection.

The review unit Lenovo sent me featured a 1080p Full HD display. A 4K option is available, but only on the slate grey fabric models.

Lenovo says that the Full HD display will give you maximum brightness of 300 nits, but I actually recorded 456 nits with the screen cranked all the way up. In real terms, this means that you’ll be able to work practically anywhere with the Yoga Slim 7 – it’s bright enough to cut through glare on a sunny day, and if you’re working late or somewhere dark, you can dip things down, and turn on the keyboard backlight. 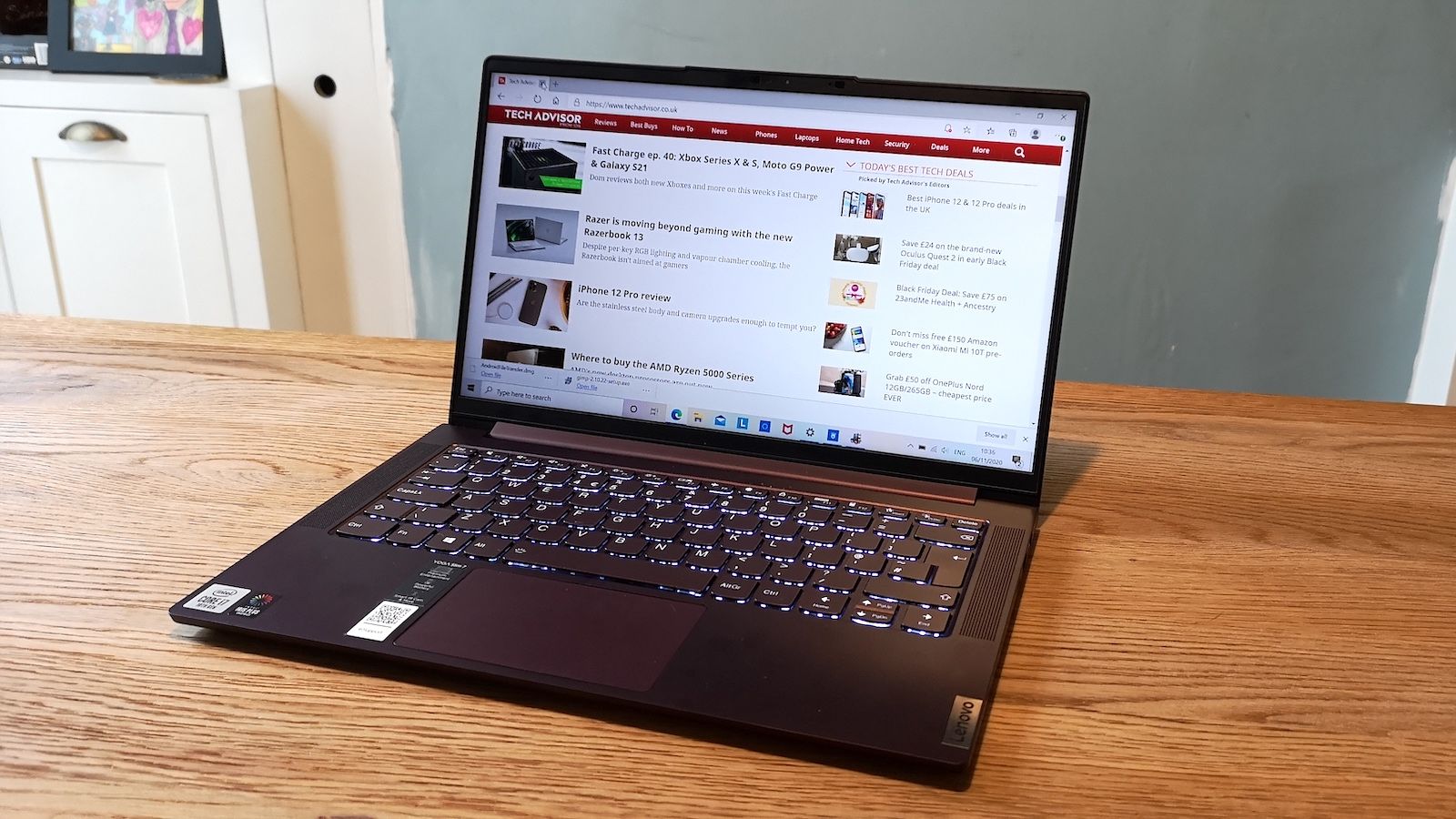 The 4K model promises max brightness of 500 nits, according to Lenovo.

Both the Full HD and 4K displays are IPS (in-plane switching) type LCDs. My review unit exhibited OK viewing angles, with only mild discolouration noticeable at angles beyond 45 degrees horizontally, and vertically. It passes the Netflix bed-bound binge test, anyway.

Speaking of streamed content, the Lenovo Yoga Slim 7’s speakers are really quite good. They support stereo sound, kick out clear treble sounds and quite decent bass too, considering their size.

As you might expect, at extreme volumes, there’s some distortion, but really, if you need your music to be that loudly, you should probably be playing it through one of the best smart speakers anyway.

All of these are quad-core processors, although the i5-1035G4 and i7-1065G7 are the more powerful of the two, as they come with the more advanced Intel Iris Plus integrated graphics unit. 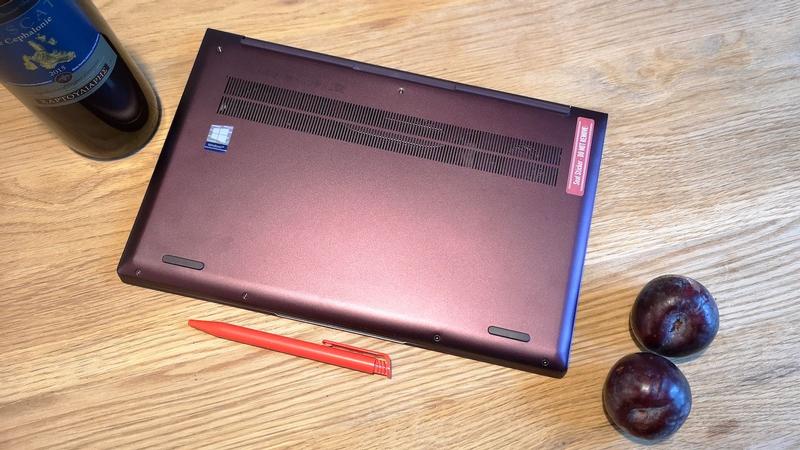 On top of this, you can pick up Lenovo Yoga Slim 7’s with dedicated Nvidia graphics units, the GeForce MX330 or MX350. These will be of interest if you’re thinking of getting a 4K Yoga Slim 7 with a view to doing some photo editing work or some not overly demanding gaming.

I can say that for day-to-day work purposes, the Yoga Slim 7 sailed through basic office tasks. Chrome, with ten tabs open, including one YouTube playlist, didn’t really see the Yoga Slim 7 lock up until about five hours of work – you should be restarting your browser after an hour or so anyway.

It took under 2 minutes to open 100 JPEGs (294MB in total) in GIMP. The twin fans, when they kick in, are not especially noisy, although I did feel the Yoga Slim 7 heating up a bit when watching something in bed or working with this on our laps – the Yoga Slim 7 likes to be used on desk surfaces.

I ran the usual series of Tech Advisor benchmarks to give you an objective idea of how this compares to similar systems:

Battery life is excellent. I would usually finish a day with 40-50% to spare, sometimes closer to 30% if I listened to Bombay Bicycle Club on YouTube a lot.

Playing a 720p film on loop with brightness locked to 120 nits saw the Lenovo Yoga Slim 7 last for a Herculean 11 hours and 50 minutes.

Lenovo says that you’ll get up to 14 hours with a Full HD Lenovo Yoga Slim 7, and up to 11 hours with a 4K one. While my real-world findings were not quite as amazing, close to 12 hours is pretty impressive – more than enough to see you through the day.

The Lenovo Yoga Slim 7 takes about two hours and ten minutes to fully charge. From empty, after half an hour, expect 20-22%, and 60-62% after an hour. An hour and a half on the pump will get you hover at the 90% mark.

As well as looking svelte and not being too heavy, the Lenovo Yoga Slim 7 is bursting with connections.

You get two Type-A USB 3.1 Gen 2 ports and a microSD card reader on the right-hand side, and HDMI 2.0, and a Type-C USB 3.2 Gen 2 with Thunderbolt 3 on the right, plus the usual charging port (also Type-C USB-shaped) and a 3.5mm headphone/microphone combo jack.

The only peripheral you’d likely want to shell out for here is an Ethernet adapter. 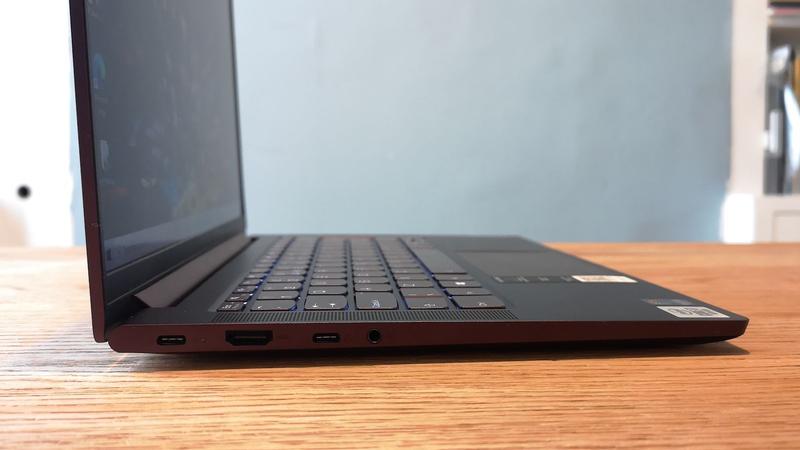 As with many laptops hitting shelves this year, the Lenovo Yoga Slim 7 features a cutting edge 2×2 802.11ax WiFi 6 antenna. Using the free WiFi Analyzer app for Windows, I recorded wireless speeds between 721Mbps and 1201Mbps when working one metre away from a Netgear Orbi RBK750 router.

The Lenovo Yoga Slim 7 is available to buy now and as I said at the top, there’s some confusion over the 7 and 7i, with retailers like Currys not using the ‘i’ to signify an Intel processor.

If you want a Yoga Slim 7 with more internal storage, Currys PC World has this Full HD Core i7 model with a 512GB SSD, going for £899. You can also get the laptop from the likes of Argos, AO and John Lewis.

The Lenovo Yoga Slim 7 offers good performance, outstanding battery life, looks great to boot, and represents a nice alternative to the likes of the HP Envy 13, and Dell XPS 13.

At the time of writing, models with a bigger 512GB hard drive appear to be not as well-stocked as 256GB versions, meaning buyers might be tempted to look around for something with a bit more space in the boot.

Note that there’s no 360-degree hinge here, but as a ‘normal’ laptop, the Slim 7 is an excellent choice. Sure, it’s missing a fingerprint scanner and Ethernet port but those are minor quibbles.

We’d recommend getting an AMD Ryzen 5 model for the best value and the Ryzen 7 is still very affordable if you need more power, including more powerful graphics than the Intel models.