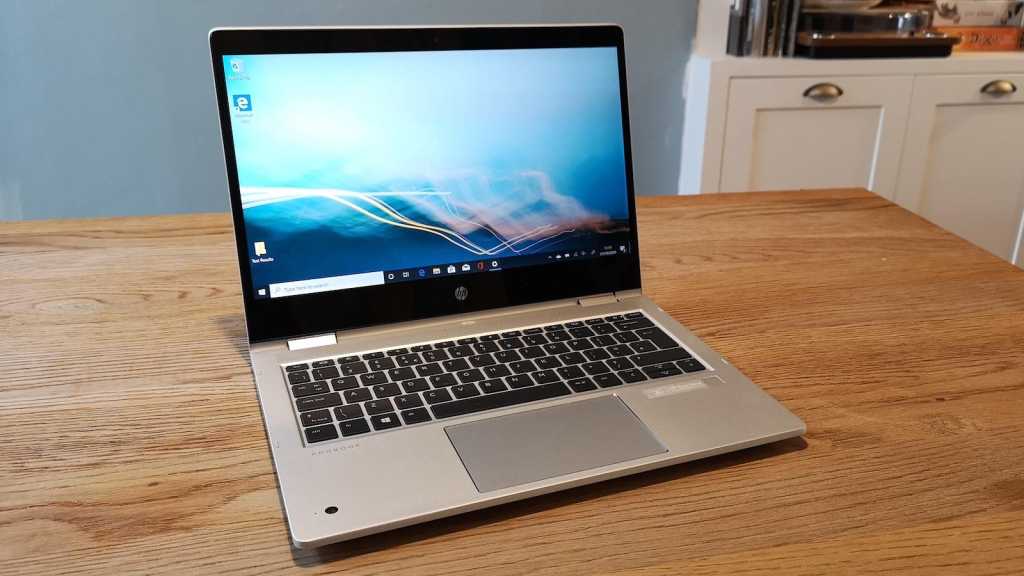 The HP Probook x360 435 G7 does the basics with style, offers good performance and battery life, and comes with integrated privacy features. It is, however, all work and no play – you won’t be doing much else on this.

The HP ProBook x360 435 range comes powered by AMD’s Ryzen 4000 series of laptop APUs, which promise solid performance without munching through the battery.

Announced back in January, these HP ProBook x360 435’s are aimed at business users and come with local security enhancements including a fingerprint scanner, a physical shutter for the camera, and a Sure View privacy-enhancing display.

The HP ProBook x360 435 G7 is typical of HP’s business 2-in-1’s; it’s a no-nonsense machine, mostly right angles and square edges, hardly any curves, and the plastic and aluminium chassis has a silvery-grey finish. It’s solid too, with virtually no flex detected in the monitor or the deck.

The G7 very much looks and feels like what you’d expect from a business laptop. It resembles a lot of HP’s ProBooks and the HP Elitebook x360s of recent years. If you’ve ever owned or seen one of those, a lot of the design cues, like the vanes for the thermal port on the left-hand side, will be familiar to you.

The keyboard is set into a recessed area of the deck and is easy to get comfortable with. The keys are snappy and offer just the right amount of travel for a laptop. The backlit keycaps also have a nice, slightly textured matt finish. The only quibble here is that the arrow keys are bunched up in the bottom right corner, and there are no dedicated nav keys (‘Home’, ‘End’, ‘Page Up/Down’). Rather, the arrow keys double up as nav keys, when you hold down Function.

The trackpad too is solid and sturdy, no tell-tale signs of wobble here. It’s also very responsive, so much so that it had to be taken down a notch in the settings.

The hinges, which let you flip the HP ProBook x360 435 G7 over and prop it up in tent mode, or use it as a tablet, also feel rock solid.

The G7’s display measures 13.3-inches corner to corner and has a typical Full HD (1920×1080) resolution within a 16:9 aspect ratio. The spec sheet promises a peak brightness of 400 nits, but we recorded 349 nits at the most. That’s just about punchy enough for working in most lighting conditions, mind.

The display uses IPS (in-plane switching) technology, which should – in theory – allow for good viewing angles, but that’s not really what you get here. Discolouration starts to creep in at 45 degrees along the horizontal and almost immediately when you tilt the screen forwards or backwards. And that’s even when the Sure View privacy filter is turned off.

Similar to the filters used by cash machines, Sure View – toggled with the F2 key – makes it virtually impossible for anyone sitting next to you to see what’s on your screen.

Of course, it being the year 2020 AD, when most of us are hopefully working from the safety of our homes, this might not be the most in-demand feature for right now, so just think ahead to those future long commutes and coffee shop remote working sessions.

Regardless, Sure View on the HP ProBook x360 435 G7 is very effective – all anyone sitting next to you will be able to see when it’s active is an indistinct grey haze. Other privacy features baked into the ProBook include Sure Start BIOS protection, Sure Click virtual containers for untrusted files and sites, and Sure Sense malware detection.

Finally, the display supports HP’s active styluses, but these are sold separately – as one was not included with our review unit, we can’t comment on how effective this is.

The HP ProBook x360 435 has two speakers which are topside-firing when it’s running in laptop mode. These are not bad, a little on the trebly side, virtually no bass tones and unlike the speakers on the likes of the HP Envy 13 (2020), they don’t benefit from any extra tuning or attention from Bang & Olufsen. That said, distortion is minimal at high volumes.

As there are no speakers on the sides or the rear, this means when you’re watching anything in tablet or tent mode, the audio is fired away from your ears. On the other hand, at least nothing is muted and muffled by your desktop/bedclothes.

The model we picked up represents the highest end, coming with a AMD Ryzen 7 4700U processor (2.0GHz base clock, boosting to 4.1GHz), and 512GB of storage, 476GB of which is available to you out of the box.

In terms of handling everyday office work, the HP ProBook x360 435 was comfortably able to juggle upwards of ten tabs in Chrome, with a YouTube playlist rolling in the background.

While the HP ProBook x360 435 is not a gaming laptop exactly, we were able to comfortably blast through a bit of Kingdom New Lands on lunch breaks. Just don’t expect to run anything like Civ 6 or Total War: Three Kingdoms.

Both the single and multi-core Geekbench 5 scores we saw were slightly better than the average for laptops powered by a Ryzen 7 4700U (as recorded by Geekbench itself).

The PC Mark 10 score of 4746 is also respectable. Breaking that down, the benchmark rated the ProBook 9199 for Essentials (web browsing, checking emails, etc) 6934 for Productivity (i.e. office work) and 4589 for Digital Content Creation – easily above the threshold for what is considered a ‘good’ PC Mark score.

The 3DMark Skydiver score was also not bad, considering there is no dedicated graphics card here, but again, if you’re looking to play a bit of Fortnite in between managing client portfolios, this laptop isn’t for you.

The table below gives you some idea of how it stands up against the likes of the Microsoft Surface Pro 7, the Lenovo Yoga C740, and the Asus ZenBook Flip 15 – along with a couple of more business focussed rivals in the Dell Latitude 7400 2-in-1 and Lenovo ThinkPad X1 Carbon.

According to AMD, the Ryzen 4000U chips promise greater energy efficiency than previous generations. This is crucial for those times when you’re not working off the mains. While HP doesn’t list an estimated battery life on its spec sheet, we’re keen to see if the latest HP ProBook can last a full working day. The short answer is, yes, it can.

We’d typically finish a day’s writing, spreadsheeting, and listening to music with about 35% left in the tank. Running a battery drain test – looping a 720p HD movie with the screen set to 120 nits brightness – gave us a not-too-shabby 9 hours and 11 minutes.

With the supplied mains adapter, we were able to get the G7 up to 40% from empty in half an hour, and 66% in one hour. After 90 minutes on charge we hit 84% and fully charged the ProBook after 1 hour 50 minutes.

Ports-wise, you get two Type-A USB 3.1 ports, one Type-C USB 3.2 port, HDMI 1.4, 3.5mm headphone jack, a microSD card reader, and a security lock slot. There is no dedicated Ethernet port, which some users may raise an eyebrow at.

Note that the Type-C USB port supports top data rates of 10Gbps, so you’ll need a USB-C-to-Ethernet adapter or a dock if you want/need to be wired in.

On the wireless side of things, the HP ProBook x360 435 G7 supports now-standard Bluetooth 5.0, and cutting-edge Wi-Fi 6.

The presence of a Wi-Fi 6 module means when connected to the right router or mesh network, you’ll be able to enjoy faster Wi-Fi. Using the free WiFi Analyzer testing tool, we recorded a top wireless speed of 1201Mbps when standing one metre away from a Netgear Orbi RBK750 router. Check out our best mesh WiFi kits and best WiFi router round-ups if you’re in the market for a Wi-Fi 6 solution.

However, you can get the laptop from £799 via Ebuyer.

John Lewis and Currys PC World are not currently selling the HP ProBook x360 435 G7 – that could, of course, all change soon.

Check out our chart of the best business laptops.

The HP ProBook x360 435 G7 is a capable business workhorse that does the basics with style, offers good battery life, and comes with all the ports you might need for meeting situations.

Integrated privacy options are also a plus, and the Sure View filter and mechanical camera shutter are effective.

On the downside, the nature of the display means that it’s only really suited for basic office work – you can get away with doing simple photo edits on this, but if you’re taking this to a meeting with a view to showing someone a presentation, book a room with a TV, and take a spare HDMI cable with you.