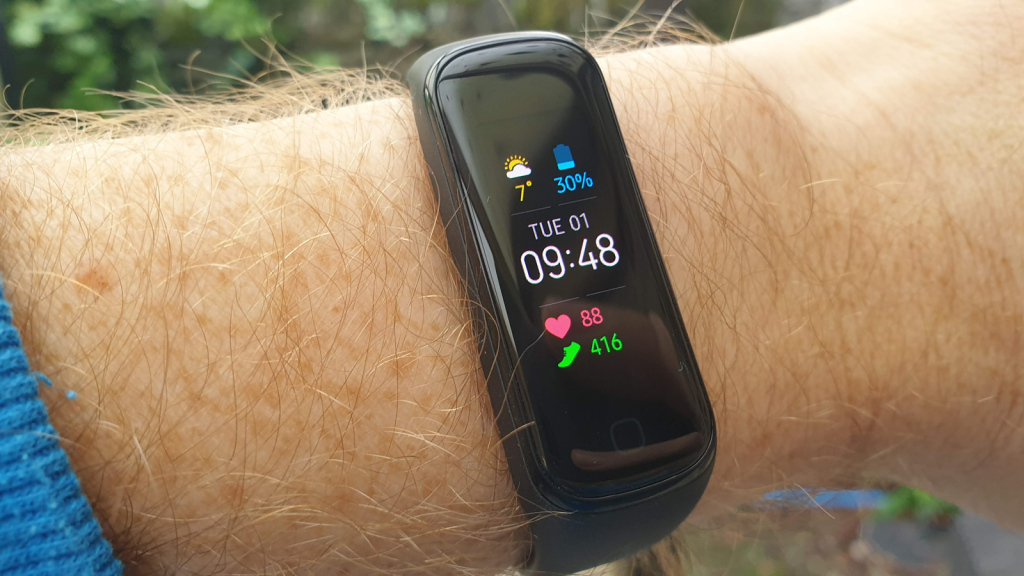 A subtle improvement on the original, Samsung has made the Galaxy Fit 2 a very competitive fitness tracker.

Samsung has updated its fitness band range with the new Galaxy Fit 2. This sees a cut in price, but does that mean a drop in quality or features?

It’s more a case of nip and tuck rather than complete overhaul with the new design. Samsung has left behind the metal surround for the display and opted instead to blend it much closer to the silicon strap. This definitely gives the Fit 2 a better aesthetic but it does mean that you lose the solitary home button that appeared on the side of the original Fit.

You can still return to the Home screen at any time though by tapping the software button in the lower portion of the display, much the same as with the Amazfit Band 5. 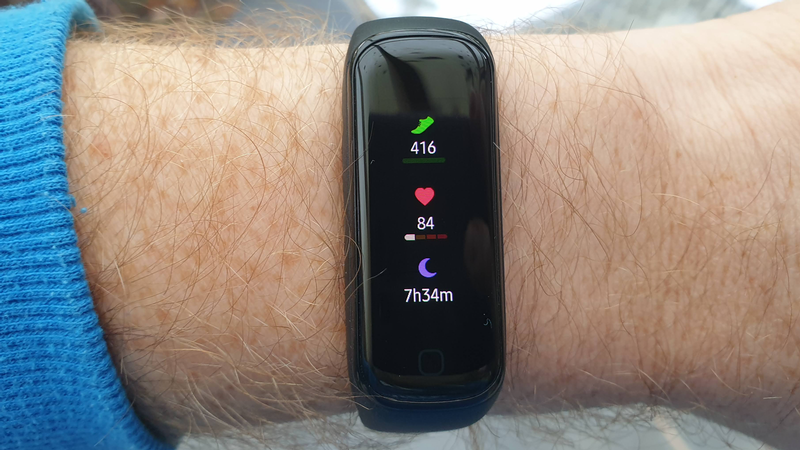 The AMOLED display itself has stretched a little, with the 0.95in of the original replaced by a 1.1in panel in the new model. A resolution of 126 x 294 might not seem much when compared to the figures we usually see on smartphones, but it’s nigh-on perfect for a device of this size.

Text is clearly defined, colours are bright, and everything looks good against the solid black background. 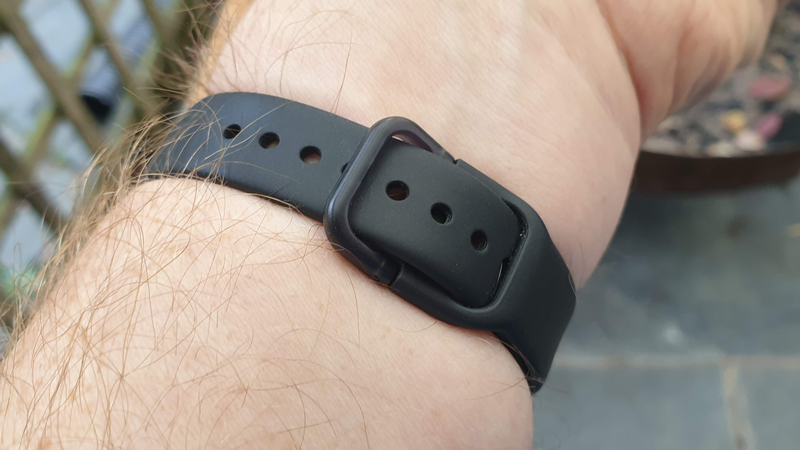 Securing it to your wrist is a sturdy buckle, with the soft silicon strap featuring a new hinged design on the clasp that makes it slightly easier to fasten it in place once you’ve fed the strap through the other opening.

During my time with the Galaxy Fit 2, I never experienced it coming loose or slipping off my wrist, even during exercising, which is just as it should be.

Samsung states that the tracker has an IP68 waterproof rating, meaning it will work in depths of up to 5ATM or 50 metres, so you can take it swimming, kayaking or into the shower. While I couldn’t go swimming during the test period, due to all the public baths being closed amidst the pandemic, I was out in more than one torrential Cornish downpour with the Galaxy Fit 2 and it didn’t bat an eyelid.

If this area is of particular importance to you, then it would be worth also checking out best swimming trackers.

Flipping the device over reveals the optical heart rate monitor, alongside the proprietary charging connections. Samsung naturally includes the charger in the box, but the cable is so short it’s ridiculous. Unless you have a USB connection on your desk or bedside table, the Fit 2 will end up on the floor, as it just won’t reach anywhere more than about 20cm away from the power point. How anyone at Samsung thought this was a good idea is beyond me. 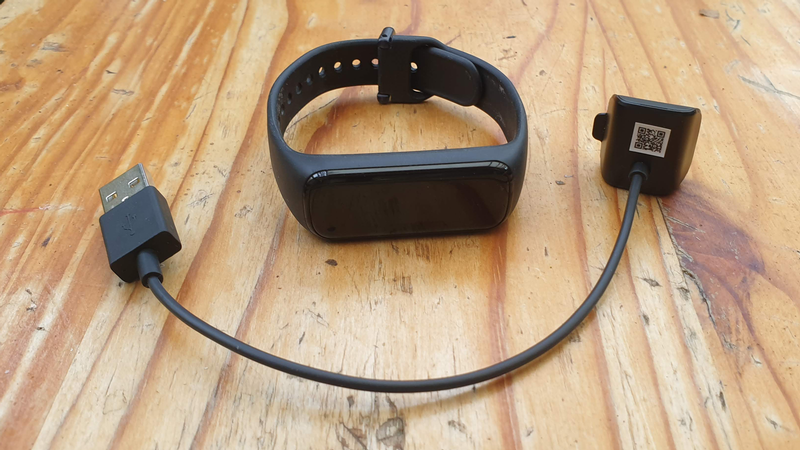 The omission of GPS means you’ll be reliant on the step counter to track your movements, and the lack of an altimeter rules out gaining any extra points for taking the stairs. You have got Bluetooth 5.1 though, so the connection to your phone should be solid.

As with most fitness trackers these days, the Galaxy Fit 2 also works as an accompanying device for your smartphone, allowing you to control apps and receive notifications.

The controls on the band itself are simple, to fit the small display. This means that you’ll need to get used to the Galaxy Wearables app, as that’s where most of the options are found. In the app, you can change the watch face to one of the 70 on offer, plus reorder the different pages that host functions like heart-rate, weather, notifications, music controls, sleep tracking and others.

Once you have things the way you want them, navigating around the interface is just a case of swiping left or right to move between functions, then up and down for more information. It’s an easy-to-use system, although if you choose to have lots of pages then you’ll be swiping quite a bit.

Much like the original Galaxy Fit, the new version will automatically detect your activities so that you don’t miss recording a workout simply by forgetting to start the timer.

There are five types that it tracks: Walking, Running, Cycling, Swimming and Other. The latter is something of a catch-all but works in a pinch. This is fewer options than those available on the original model, but it should cover enough bases to make this a reliable tool in your fitness arsenal. 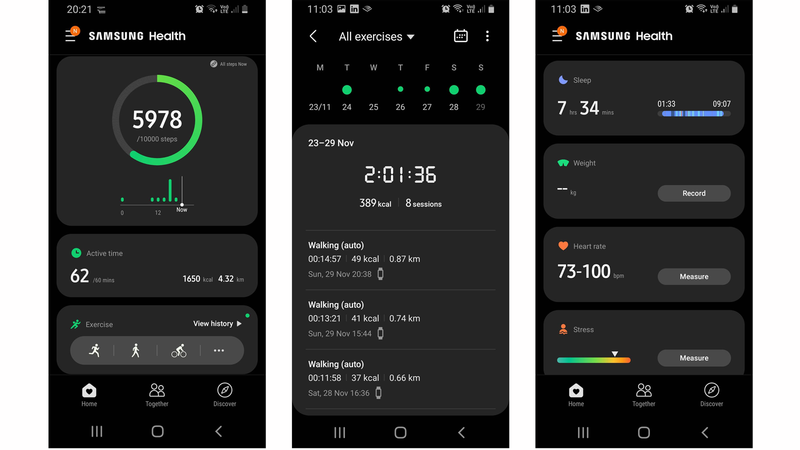 In use, the tracker does a good job of identifying your exertions, monitoring steps, heart rate and the duration of a session. Opening up the accompanying app on your smartphone also gives you the option of setting targets for each activity – say, a certain length of time or number of calories burned – that will signal the end of the session.

During my time with the Galaxy Fit 2, I found the tracking to be accurate and reliable, plus the automatic triggering was a great feature, as I often forgot to start the tracker manually before heading out on a hike.

One of my main complaints about the original Galaxy Fit was the hugely erratic heart-rate monitoring. The reported numbers would jump all over the place and didn’t hold true with the BPM usually found using a range of other fitness trackers.

Thankfully, this is much improved in the Fit 2, as the monitoring seemed much closer to what I’d expect from my resting and exercising rates. You have the option in the Galaxy Wearables app to either track at various intervals or continuously, although bear in mind that the latter will have an impact on the battery life.

Sleep tracking is usually something of an extra in this kind of product. How accurate they are is debatable, but the Fit 2 can measure movement and heart rate, so that should give you some insights into how restful your night’s slumber may have been.

As a way to monitor the times you go to bed and get up again, the Galaxy Fit 2 is excellent as it tracks this automatically.

Using the data it syncs to the Samsung Health app, I was able to get a good picture of my average sleep patterns and how disappointing they are in terms of my self-discipline. 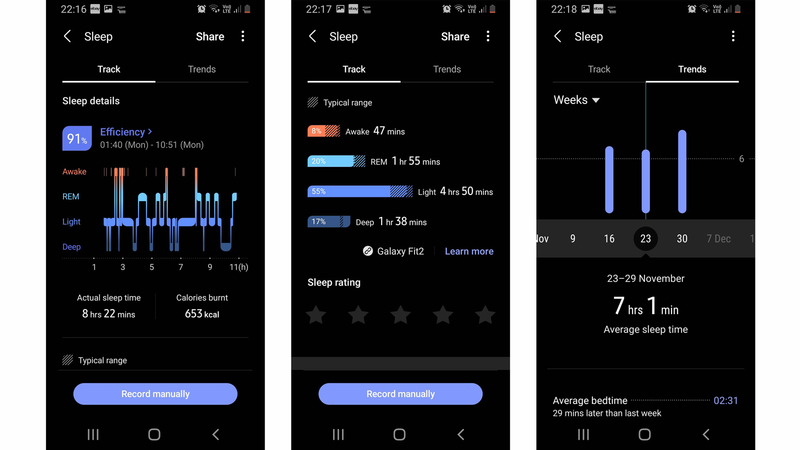 Each night is broken down into the various types of sleep – REM, deep, light – and how often you were awake. I wouldn’t necessarily swear by it, but I did find that nights when I didn’t sleep that well, the tracker noticed and recorded the disruptions.

You can also receive notifications from a variety of apps directly to the Fit 2, all of which can be turned on or off via the Galaxy Wearables app. Plus, there’s the ability to send quick preset responses to texts, WhatsApp and other messaging apps. Again, these can be added or removed via the app.

Music controls are also included, making it a doddle to pause, play or alter the volume of any audio you’re listening too, whether it’s on Audible, Spotify or your favourite podcasting app. You’ll also find data that shows the weather, upcoming appointments, not to mention, in these times of COVID-19, a new reminder that tells you to wash your hands and provides a 25 second timer for when you do so.

Samsung claims a maximum battery life of 21 days of charge at a time, but quickly underlines that with up to 15 days with typical usage. You could probably get that if you turn off the continuous heart-rate monitoring and some of the notifications, but with everything turned on I regularly got around 10 days, which is still excellent.

To see which devices the Samsung Galaxy Fit 2 is up against, take a look at our selection of the best fitness trackers.

When the original Galaxy Fit came out last year, there were two models: the full-fat Galaxy Fit which cost £89/US$99 and the less powerful Galaxy Fit-E, that was a more affordable £35/$38. This time around, Samsung has split the difference, with the updated Galaxy Fit 2, which costs £49/$59.

No doubt this is in response to rivals such as the Amazfit Band 5, Xiaomi Mi Band 5 and Honor Band 5, which all offers many of the same features but for under £50/$50.

You can buy the Samsung Galaxy Fit 2 directly from Samsung in the US and here in the UK or from many retailers, including John Lewis and Argos.

Samsung has addressed the two main drawbacks that made the original Galaxy Fit hard to recommend – price and heart-rate monitoring. At £49/US$59 the new model is far more competitive against its rivals, while the erratic readings of the original are now gone, replaced by solid and realistic numbers for BPM.

The refined design is also a boon, as it makes the Galaxy Fit 2 as attractive as it is useful. It’s a shame that there’s no GPS or NFC, and you’re still paying a little more than for the likes of the Xiaomi Mi Band 5 and Amazfit Band 5, but as a modern fitness tracker, the Galaxy Fit 2 is one that’s wholly worth considering.