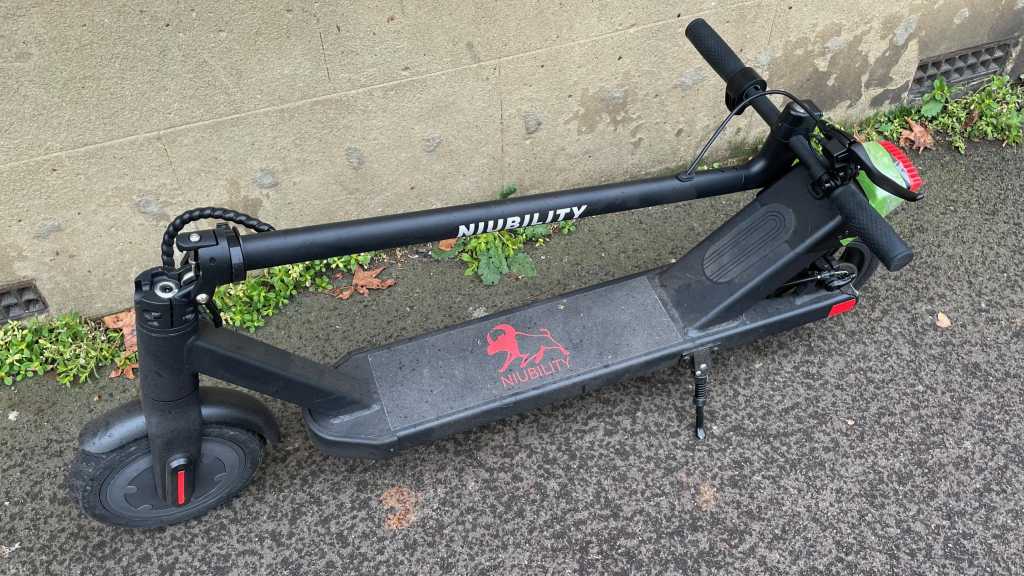 The Niubility N1 is a cheap alternative to scooters from established brands like Xiaomi, and while it’s a valiant effort, it’s not the perfect electric scooter.

While still not legal to ride on public roads in the UK, electric scooters are becoming more popular around the world – and with the range of benefits on offer, it’s not hard to see why. The problem is that electric scooters often come at a premium, costing upwards of £500 when going to established brands like Xiaomi and Ninebot.

That’s where relatively unknown companies like Niubility come in, offering a scooter of a similar standard at a discount. That’s the case with the Niubility N1, supplied to us by Gearbest for review, although it’s not the perfect alternative to Xiaomi’s popular Mi Scooter range. Carry on reading to find out why.

For more information on electric scooter legality in the UK, take a look at our UK e-scooter law explainer.

In a world of electric scooters that look near-identical, Niubility has created something more unique with the N1.

The most prominent feature of the scooter is the rear-end, featuring an angled footrest to shield your feet from the rear wheel. It’s an interesting addition to the electric scooter, providing a solid angled surface to rest your foot on when riding, but I can’t help but feel it would’ve been better utilised with a foot braking system similar to those used on push scooters – the design is there, it just needs movable parts.

The raised rear also means that the flat area of the scooter is shorter than much of the competition, so you’ll have to adjust your riding stance accordingly. 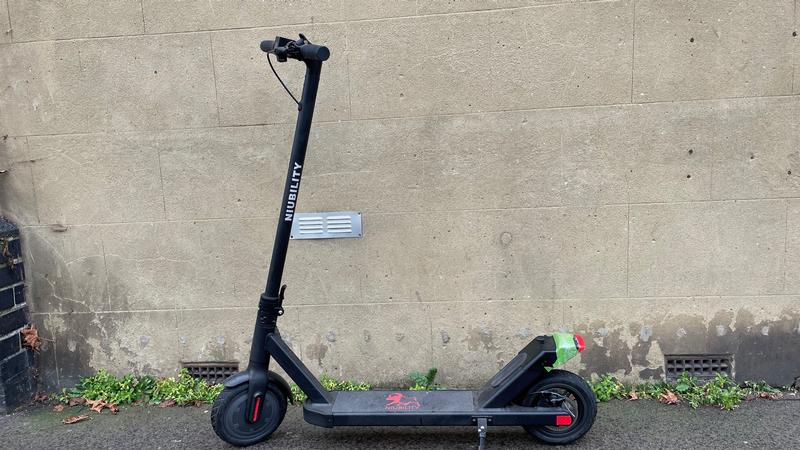 Elsewhere with the N1, it’s business as usual: it sports the standard electric scooter design, complete with the ability to fold down in a few seconds, making it an ideal form of transport for quick journeys. It is a little weighty at around 12kg, but that is lighter than popular choices like the 14.2kg Xiaomi Mi Scooter Pro 2 and 18kg Ninebot Max G30.

The handlebars are wide, sporting brake controls and a centrally mounted display that gives you key information including current speed and battery life at a glimpse. There’s also a front-facing LED light for night journeys, and you’ll find reflectors mounted on the sides of the scooter too.

Where the N1 shows its budget nature is in the app department: while many electric scooters feature companion apps to access more information (like overall milage) and extra features (like the ability to enable cruise control) that’s not available with the N1. It’s not a dealbreaker, but it is handy to have an app for when you need to tweak settings like the unit of speed displayed – it’s km/h by default on the N1, with no easy way to switch to mph.

It also lacks any real water resistance, unlike more premium scooters, meaning it shouldn’t really be used in the rain or wet. That could limit its potential uses, especially in the seemingly always-wet UK. 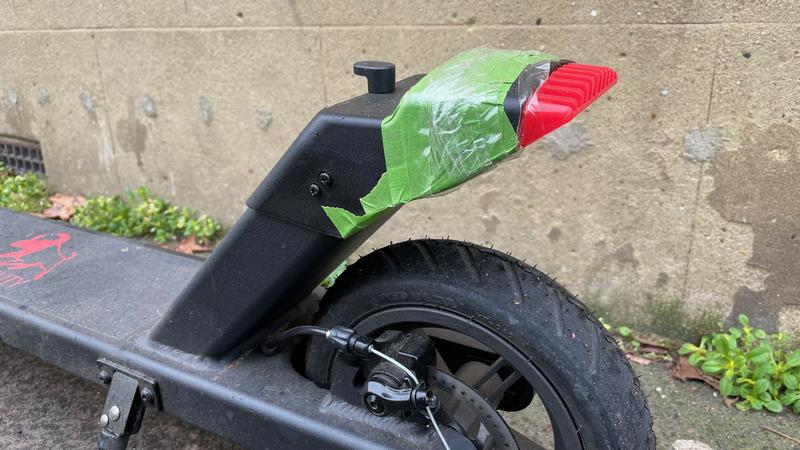 Water resistance aside, there is a question mark around overall build quality. Just days after receiving the Niubility N1, the rear brake light fell off – not knocked off – mid-ride, exposing the wiring of the light to the elements. The light still functions, admittedly, so I rigorously taped the brake light housing back on to continue testing the scooter. It could be a one-off issue, but it’s something worth considering when thinking of investing in the Niubility N1.

Given the budget nature of the Niubility N1, it actually rides pretty well. There’s a brushless 250w motor built into the front wheel that works well, with whisper-quiet smooth power delivery that’ll get you up to around 15mph. As with many scooters, you’ve got a choice of ride modes, although there are only two available on the N1. You can choose from Eco, with slower acceleration, and Sport, offering the best performance possible – albeit to the detriment of battery life and range.

The riding experience is generally quick and comfortable, with the scooter picking up speed within a few seconds of kicking off (it needs a push-off to start the motor) and sustaining the speed over long periods. The only time you’ll really begin to see the limitations of the 250W motor is when you’re going up steeper inclines and the N1 begins to crawl. Admittedly this will also vary depending on the weight of the rider, but generally, the N1 is designed for flatter environments. 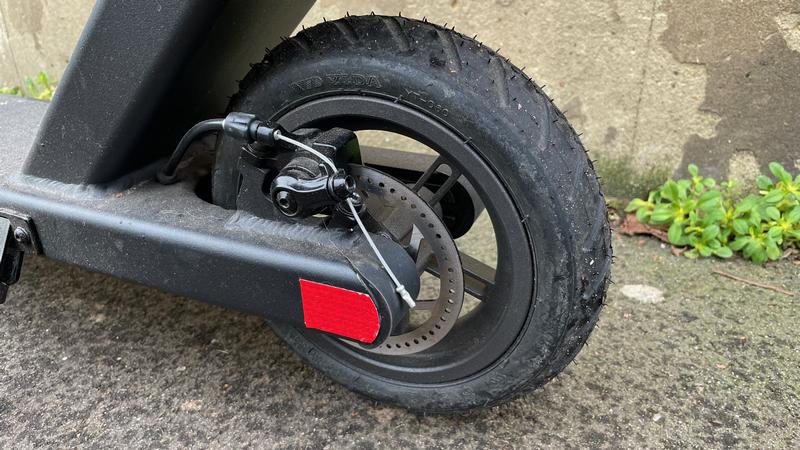 It’s not quite as smooth a ride as you might expect though, mainly down to the airless 8.5in tyres, meaning you’ll likely feel every bump and dip in the road as you ride along.

The good news is that when you do need to stop, the braking system works very well, thanks to the inclusion of a mechanical rear disc brake as well as the e-brake built into the scooter’s motor. The brake light will also flash when applying the brakes to alert those nearby to your intention – when it doesn’t fall off, anyway.

The 256Wh battery should provide you with around 15 miles of range, but there are so many variables that have an effect on battery life (rider weight, speed, inclines) that it’ll vary from day-to-day. The battery isn’t quite as high capacity as those found in more expensive scooters, but it’ll do for shorter rides. The charging brick does feature an EU plug though, so you’ll have to pick up a UK adaptor to charge the scooter once it does run out of battery – something that takes no longer than three or four hours in my experience.

The good news is that the scooters ship from a warehouse in Poland rather than direct from China, meaning it should be delivered within 3-5 days of ordering. 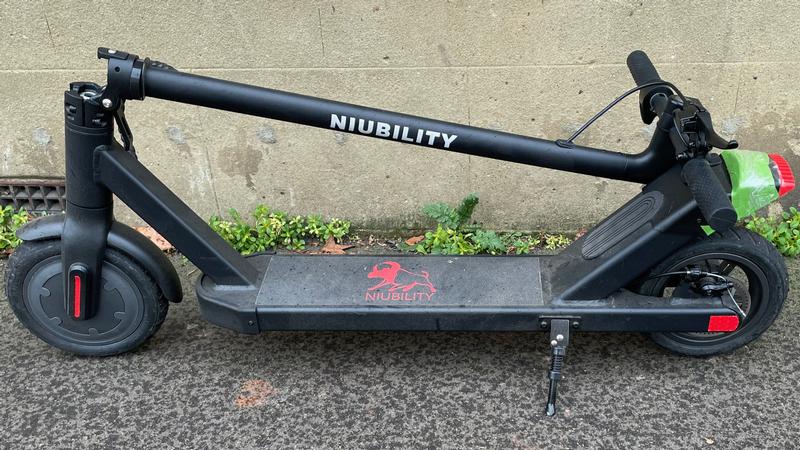 The Niubility N1 is a decent electric scooter with a unique shape and lightweight build, making it easy to fold up and carry onto public transport or fit into the boot of your car. Despite the lightweight design it’s quite sturdy, offering a max rider weight of 120kg, and with max speeds of 15mph, it’s a nippy little scooter. The range isn’t quite as impressive as some rivals at 15 miles, and there’s no app to change settings like the measurement of speed displayed on the scooter, but these are minor niggles when you consider the budget-friendly nature of the rideable.

There are questions around build quality though, with the rear brake light falling off within days of receiving the scooter, which is worth bearing in mind if you’re considering the Niubility N1.