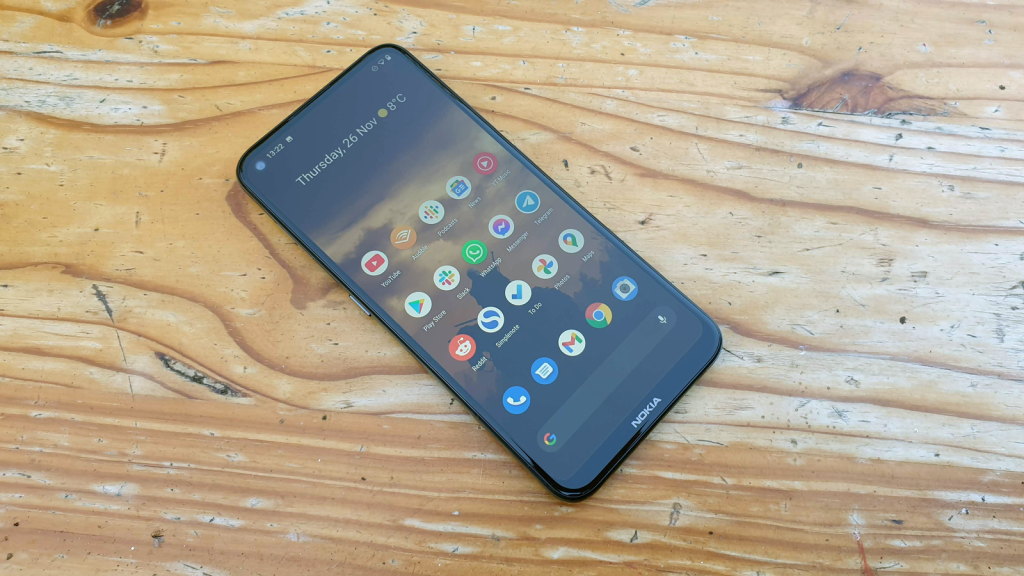 Smart design and great cameras can’t quite make up for the poor performance.

Nokia is a name synonymous with the mobile phone, but not so much with the smartphone. The last decade hasn’t been kind to the company, but things could be turning around thanks to a continually evolving line-up of new devices, including the Nokia 3.4.

It has some interesting features, but perhaps the most important is the low price. So, let’s see if you get what you pay for or whether this is a true bargain.

You don’t get the impression this is a ‘cheap’ phone when you first take the Nokia 3.4 out of the box. Yes, the body has a back that’s made of plastic, but it comes with a textured finish that actually makes it comfortable to hold, as opposed the non-friction glass backs on expensive phones that give me conniptions every time I hold one, as I just imagine them slipping straight through my fingers.

The chassis itself is metal, as shown by the band that goes around the rim, and there’s a certain amount of heft to the device. Volume and power buttons adorn the right flank, while a dedicated Google Assistant button is on the left. The rest of the accoutrements include a USB-C charging port, 3.5mm headphone jack, SIM tray that also holds a microSD card, and the single speaker.

A  6.39in LCD display fills the front panel, with only slim bezels running outside its edge. The 19:5:9 ratio means that it’s tall, so there’s no chance of reaching the top edge using one hand, but the chassis’ overall dimensions of 160.97 x 75.99 x 8.7mm and 180g weight make it not the smallest or lightest of devices, but certainly not excessive.

The reason for the mainly bezel-free display is that Nokia has saved space by going down the punch-hole route for the front-facing camera, avoiding notches or teardrop shapes along the top of the screen. Flipping the device over reveals three more cameras, which is quite impressive for a device at this price, plus the fingerprint sensor that allows you to unlock the phone

Of course, there are some features missing that you would find on more expensive smartphones, such as waterproofing, wireless charging or even fast charging, but there are limits to what Nokia could squeeze into its budget, so none of them are present on the 3.4.

You also won’t find any top tier processors in a model costing as little as this, but Nokia has selected the 8-core 1.8Ghz Qualcomm Snapdragon 460, which is now appearing on similarly priced devices likes the Motorola E7 Plus and Oppo A53.

This is paired with 3GB of RAM and 32GB of storage, although you can opt for differently configured versions of the 3.4 that come with 3GB/64GB or 4GB/64GB if you prefer. You might want to do so as the performance on this model was patchy throughout the test period.

Stuttering within more demanding apps was commonplace, and the camera became unresponsive on several occasions, with the shutter button not responding, focus not realigning, and in one case the whole app just crashing out.

Even waking the device could take that extra second or so longer than you’d expect, with often a delay between tapping the power button and the screen coming to life. It’s not the end of the world to have to wait for a second, but when you consider how often you wake your phone each day, this hesitation soon becomes a real annoyance.

Here’s how the Nokia 3.4 compares to some other models in the budget category;

As you may have already noticed, the storage capacity on the Nokia 3.4 is about as low as you can possibly get away with these days at 32GB. While this is disappointing, you do have the option to use a microSD card to bolster this by quite a margin, as the maximum card capacity is 512GB.

Admittedly, most quality cards with that capacity will cost you a fair chunk of the actual phone’s price tag but opting for 64GB instantly turns the paltry storage on the 3.4 into something that can hold a large music library as well as your photos and other data. We have a useful guide to the best microSD cards for the pick of the bunch.

The 6.39in LCD display is a decent effort, although the 1560 x 720-pixel resolution does make it a little soft on small text, depending on the colour of the background. Colours are bright, streaming Netflix and YouTube gives pleasing results, and the 400 nits maximum brightness means you can still use it outside in the harsh winter sun, even if it’s half what we’d expect from a flagship.

I did encounter several occasions when the palm cancelling didn’t register that well though, making the phone close apps or navigate backwards, mainly due to the tiny bezels along the sides. It’s possible that a case could solve some of these issues, and I’d recommend using one with any phone.

Having a triple camera combination on a device at this price is really quite impressive. Even more so when you see the kind of images that can be captured. In truth, it’s really two cameras, as the main 13MP shooter works in combination with 2MP depth sensor to enable the Portrait mode that blurs the background, while the 5MP ultra-wide makes it easier to capture landscapes.

Using the Portrait mode, I was very pleased with some of the images the Nokia 3.4 could produce. As you can see from the image below, in the right light the camera can capture quite stunning photos, with a nice bokeh effect keeping the foreground in focus but softening the rest.

In harsher conditions, the sensor did have a tendency to blow out the highlights, giving you results with very bright areas of the frame. But, that isn’t unusual on more expensive models, so I won’t mark down the Nokia too much.

The main camera interface has an area that shows a single tree or several, this quickly switches you between the standard focus length and the ultra-wide. In use, I found this helpful, particularly in those moments when you can’t move back any further but want to capture more in the frame.

There’s also a Night Mode which works ok, although you won’t be getting into Google Pixel territory, but it’s a real bonus that Nokia managed to include it at all.

Video quality tops out at 1080p at 60fps, which is completely acceptable. Again, in good light you’re going to be pleasantly surprised by the footage, with focus managing to track moving subjects with a decent amount of success. When things get darker, then the quality dips, but again, this isn’t uncommon.

Switching to the front/selfie camera sees things take a dip. Focus is soft, light measuring tends to over-expose, and generally it doesn’t really compare to the higher-quality options found on the back.

The box boasts a two-day battery life, and that’s about right. If you use your phone for checking social media, listening to content, taking some photos, and perusing the shops, then you should make it to the evening of the second day on a regular basis. Spend more time in the camera app or gaming and that will obviously decrease.

As part of the test I ran the PCMark benchmark app, which keeps the display on and runs various video and animation tests. After 13 hours the Nokia 3.4 still had juice in the tank, so I think that speaks to the impressive optimisation of the included 4000mAh battery.

Most Nokia phones are now on the Android One platform, which gives a stock version of Android without any of the overlays that many manufacturers feel the need to use. It’s a clean, nicely designed interface that comes with all the normal Google apps.

At the time of writing, it comes preinstalled with Android 10 and one of the best things about Android One is that Google guarantees two years of upgrades for all devices, so you can be confident that the Nokia 3.4 won’t be left behind any time soon.

As mentioned above, the price for the Nokia 3.4 is pretty small. You can pick up this device directly from Nokia for £129.99/$179.99 and it should be available from most electronics retailers in the UK by the time you read this review, with US customers possibly having to wait until the early part of 2021.

This puts is in direct competition with the Xiaomi Redmi 9 that goes for £139 in the UK, although it’s not available directly in the US, so customers there would need to use an importer like Gearbest that has the Redmi 9 available for $272 at the time of writing.

Nokia also has an even cheaper model available, with the Nokia 2.4 costing just £99/£139. To see if it’s worth the saving, read our full Nokia 2.4 review.

Nokia has the right motives with the 3.4, in that those looking for a budget phone shouldn’t have to settle for poor specs. The cameras on this handset are capable of some truly excellent results, the display is a decent panel at this price, and the Android One platform makes it a nice user experience all round.

It’s such a shame then that the performance is so inconsistent. Regular hesitations when doing even the most basic task (such as waking the phone up) are compounded by long delays and unresponsive behaviour when using more challenging apps like the camera. In its current state, I find it hard to recommend this device even to those who are finding the current financial climate difficult.