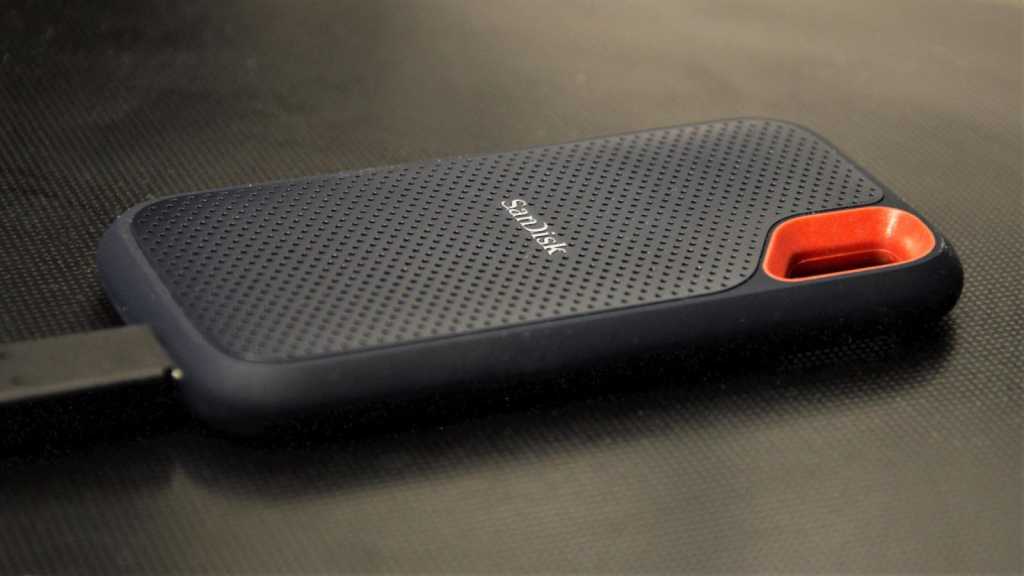 A much better option than the previous Extreme Portable SSD. The new design has double the speed and encryption baked in.

Back in 2018, SanDisk launched a new generation of portable SSDs under the ‘Extreme’ branding, and they were generally well received.

They were repackaged SATA SSDs bundled with a SATA to USB 3.0 adapter, capping their performance at the same level as SATA-connected internal drives.

At that time, fewer PCs and laptops had NVMe M.2 storage, but these days it’s the norm, rather than the exception.

For a system with NVMe main drives, external storage can be the bottleneck in any transfer between the two, and SanDisk has set out to address this with new Extreme and Extreme Pro variants of its portable drives.

I’m reviewing the Extreme here, a drive that looks remarkably like the one it replaced until you run some benchmarks.

Out of the box I immediately had déjà vu because, ostensibly, this SanDisk Extreme Portable SSD V2 looks just like the previous product and has an almost identical name.

What compounds this opacity is that the box doesn’t mention V2 at all, only ‘SanDisk Extreme Portable SSD’, precisely the same name as the product it replaces. To be clear, this isn’t the old box, since it mentions the new speeds that only the V2 can achieve.

On close inspection, and we’re talking near-forensic, it appears that on the new design the hole on the top right of the unit is marginally larger on the new model. 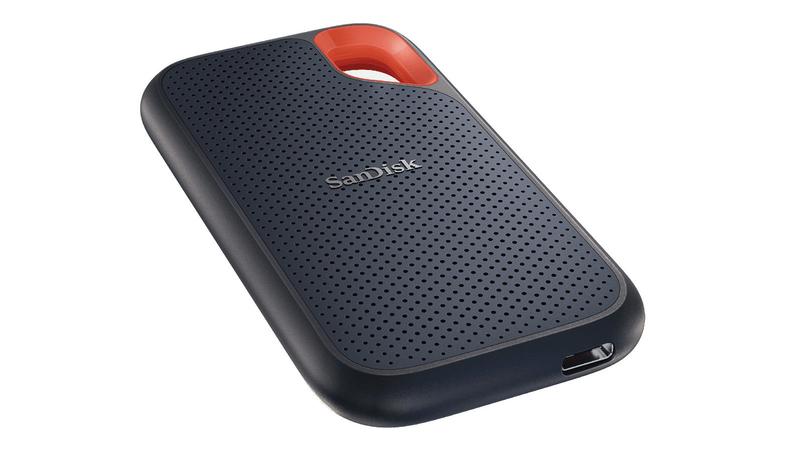 Subjecting it to the ignominy of digital callipers, the new Extreme is also a tiny bit longer, wider, and thicker. It’s an assumption, but those companies that product carry cases might need to make only small if any, adjustments to cope with both designs.

But the patterning on the enclosure, placement of the USB-C port and protective rubberised coating all look the same, although I didn’t have a previous model on hand to directly compare them.

What they both share is two-meter drop protection and IP55 water and dust resistance. I should say that IP55 water resistance is much less than the IP67 and IP68 standards, and the V2 won’t handle being submerged.

SanDisk must be confident that the V2 is more robust as it has extended the warranty period from three years before to five years now.

The drive and cable combination are remarkably light, at just 80g, making this one of the most lightweight external drives we’ve tested at Tech Advisor.

Out of the box, you get the drive, a noticeably short 20cm long cable and a small adapter.  The drive has a USB-C port, and an adapter for a USB Type-A socket, if you don’t have USB-C on your computer.

It needs saying that the technology behind the port is the critical factor, not that it is USB-C or USB-A.

The drive comes pre-formatted using the exFAT structure and on the drive are utilities to access the encryption features from Windows  8 and 10, and also the Apple Mac OS. Encryption is new for this range and, along with the extra speed, is one of the virtues of choosing the new model. 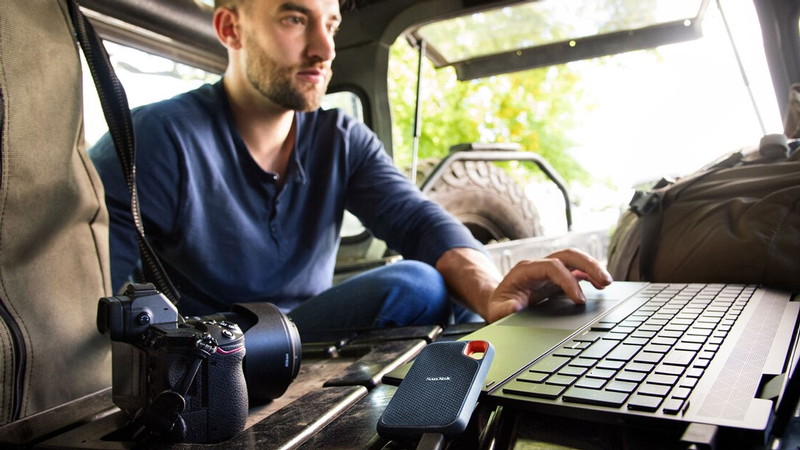 What you don’t get are any tools to sync the contents of folders on the PC to the drive, although it should work with any third-party applications designed to achieve this task.

As these types of activities are what people buy these drives for, that hardware makers don’t provide the software to exploit them properly is disappointing.

The quoted speed of the drive is 1050MB/s reads and 1,000MB/s writes, making it identical to the Pro version of the original Extreme Portable SSDs.

And, that’s about it. It is an external USB drive that you can connect and use as you would any other, and it can be used with desktops, laptops, and even some mobile devices.

The original version of the SanDisk Extreme Portable SSD had a quoted speed of 550MB reads, and 500MB writes, as tested by the often optimistic CrystalDiskMark.

And, using the same synthetic benchmark I achieved 1,027MB/s reads and 958MB/s writes, almost exactly double. The performance limitation here isn’t the NAND modules inside, but the USB 3.2 Gen 2 interface.

It has a total bandwidth allocation of 10Mbits, and once the various packaging protocols and error checking overheads are removed, around 1,100-1,000 Mb/s is the absolute limit.

Therefore, when USB 4.0 becomes available, this drive won’t go any faster, as it will still be connecting using the USB 3.2 Gen standards. 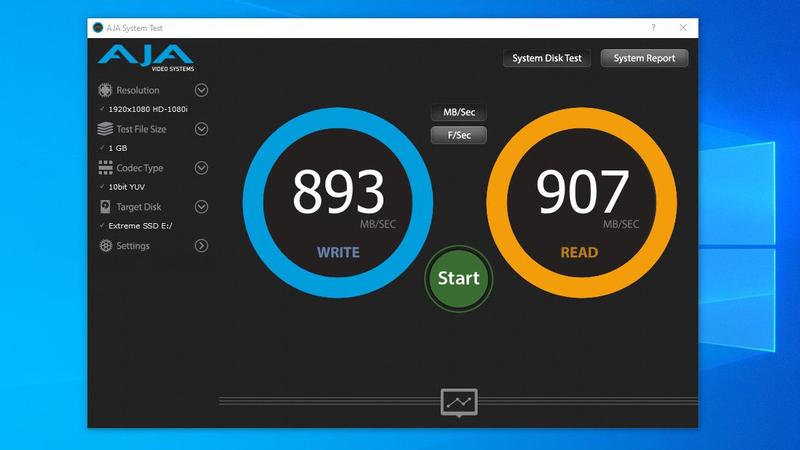 While I didn’t test the Pro version, that design offers 20Mbit USB 3.2 Gen 2×2 mode, with double again the bandwidth and resulting performance. However, ports with Gen 2×2 are rare, and it isn’t a mode that will be supported under USB 4.0 when that arrives.

Overall, performance on this drive is decent if you have USB 3.2 Gen 2, and almost identical to the first generation Pro drives. It’s certainly worth checking if the devices you plan to use this drive with support Gen 2, otherwise you won’t see transfer speeds this fast.

Where the previous version of this product came with a 250GB option, the ‘V2’ comes in just 500GB, 1TB and 2TB options.

These are priced at £99.99, £164.99 and £304.99 respectively and are available direct from Western Digital’s store – WD owns SanDisk, in case you weren’t aware. Retailers such as Amazon and Ebuyer haven’t picked up the V2 yet but you can still buy the older model. 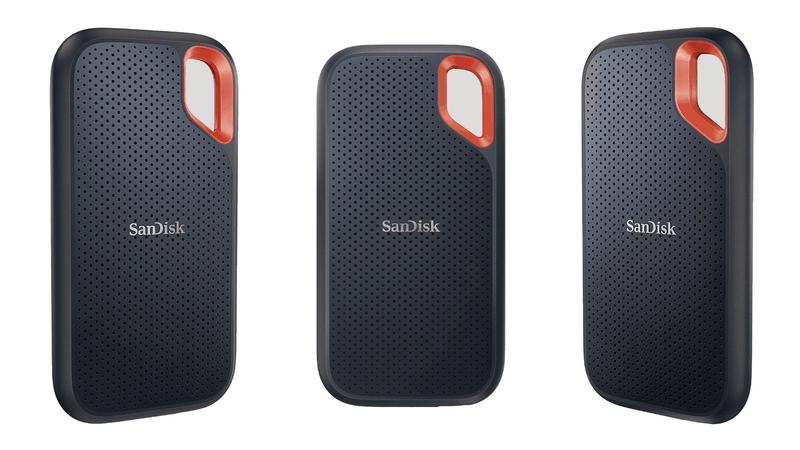 For comparison, the previous Extreme 1TB sells for £135 or $139.99, so could be a money-saving option for those who need the space and are less interested in the speed and encryption advantages of the V2 model.

Those prices make the V2 more expensive than the similarly specified Crucial X8 and Samsung T7. But a little cheaper than the LaCie Portable High Performance External SSD, and G-Technology G-Drive Mobile.

Putting aside the confusion between old and new models, the hardware in the V2 is worth purchasing for those with 10Mbit/s USB-C ports. Without those ports, this drive isn’t any quicker than its predecessor, as the 5MBits of USB 3.1 Gen 1 (aka USB 3.0) will cap performance at around 550MB/s.

The problem for SanDisk here is that there is a slew of rival portable SSDs, most notably the Crucial X8, that offer the same performance for less outlay.

The V2 weighs less, but I’d contest it is less damage resistant than the X8. Plus, for those that don’t have a USB 3.2 Gen 2 port, the original SanDisk Extreme Portable SSD is still available, and more affordable.

Those that want ultimate performance can buy a Thunderbolt 3 SSD if they have that port. Or, the SanDisk Extreme Pro Portable SSD V2. But those are both more expensive choices, and to get the outstanding performance of the Pro V2 requires a USB 3.2 Gen 2×2 port, something that very few computers have, or ever will have.

The SanDisk Extreme Portable SSD V2 has already dropped in price a bit since I started this review and I hope this continutes as the external SSD storage market is becoming increasingly competitive, and this is a well-engineered device that performs admirably. So if you see it at cheaper prices, it’s an even better deal.