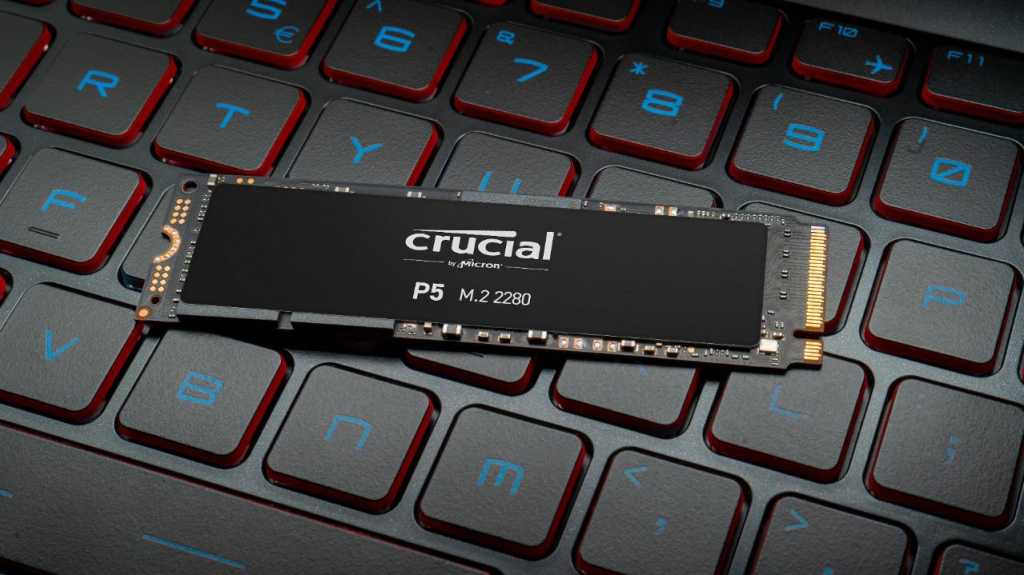 Faster than the P2 at most things, but it doesn’t compete with the Samsung 970 EVO Plus for pure speed.

When Crucial launched its P2 NVMe drive earlier in the year I, among others, was a little disappointed.

While the read performance was excellent, the write speed wasn’t nearly as impressive. And, the P2 only came in 250GB and 500GB capacities, below the sizes that many people required. But it was cheap, and therefore filled a niche for those that needed PCs to boot and run Windows (or another OS) rapidly for a modest outlay.

But it wasn’t the product that I expected from Crucial, and the P2 looks now a bit like it was a placeholder for the new P5.

To summarise the visual styling and design flair executed in the P5; it’s an M.2 stick 22mm wide and 80mm long with chips on one side. And anyone expecting something else has been watching too many old Apple events during lockdown.

Curiously, the label on the chip side with the Crucial Logo was made big enough to cover all the chip tops, presumably to allow Micron to change the specification of those parts without generating negative feedback. 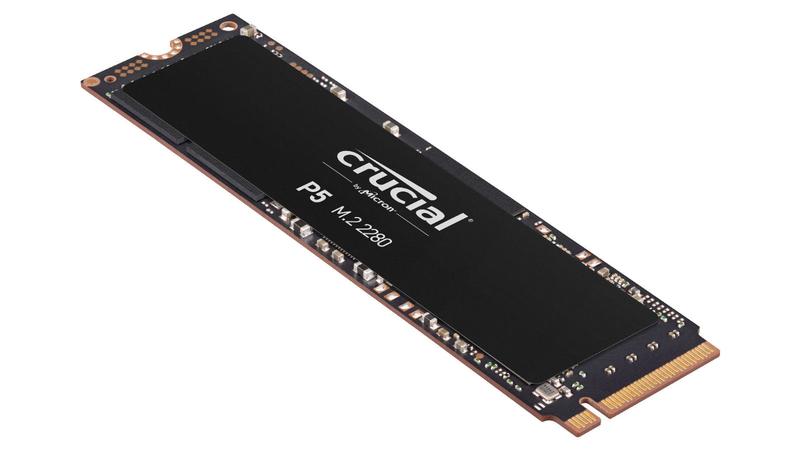 The quality of the board is high, as I’d expect, and the underside has another informative label that tells us that both the 1TB and 2TB review samples were both made in Malaysia.

I’d have liked to have seen some attempt at heat management, but that Crucial didn’t bother isn’t a huge surprise.

The P5 comes in four different capacities; 250GB, 500GB, 1TB and 2TB. They all use the same controller and fit into a 2280 M.2 PCIe slot on a compatible motherboard.

I’ve been told that the two smaller capacities, 250GB and 500GB, currently use the older 64L TLC NAND, but the 1TB and 2TB models use the newer 96L TLC NAND.

They all use Crucial’s NVMe controller, a design that Micron developed in-house around Arm Cortex-R5 CPU cores and eight NAND channels.

The smaller drives use 256GB flash dies where the 1TB and 2TB use 512GB dies and the 2TB model sports 32 dies delivered in sixteen per NAND package.

However, the way that the smallest 250GB drive is interfaced to its NAND has reduced the writing throughput by more than 50% because of the lower density. The scale of this drive also gives it a lower TBW (Total Bytes Written) value and a relatively high cost per GB compared to its siblings, strongly suggests that you should avoid that model if possible.

Conversely, the 2TB model with the highest density enables the best interleave structure that should translate into the best performance, in theory. 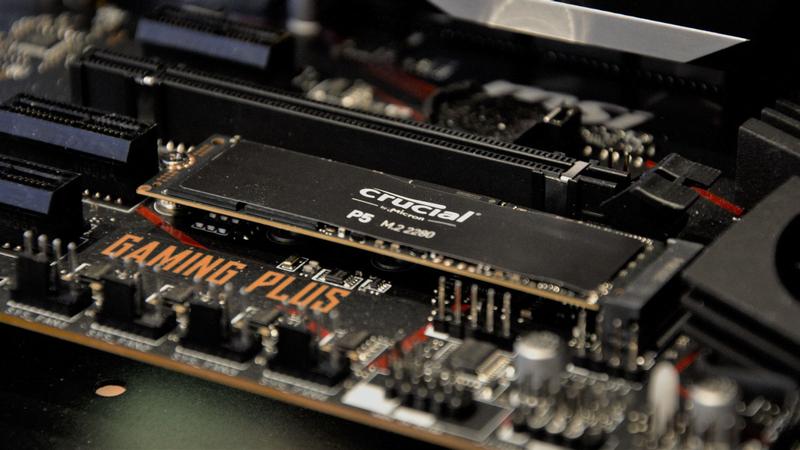 All sizes above 500GB get the same quoted speed, reading and writing, and the only differentiators are cost and the TBW limits that are proportional to the size of the drive.  If you wrote 1TB of files in a day to the 1TB drive each NAND cell would be written once, where on a 2TB drive only half the locations would be modified. Therefore, the 2TB would wear out half as quickly, given the same level of use.

In short, unless you edit terabytes of video data every day on your PC, you’re unlikely to exceed the usage limitations of the NAND on the P5 in any appreciable way before you replace it with something bigger and faster.

Another major improvement of the P5 over the P2 is that this drive has hardware encryption enabling the contents to be secured. This drive is TCG Opal 2.0 specification, has IEEE 1667 features and is eDrive compliant.

Unusually, I had access to both the 1TB and 2TB P5 models, enabling us to compare any differences between different capacity drives.

While the 2TB drive is a tiny bit faster, the difference is not significant enough to make this the most desirable P5 for performance. However, it is in respect of capacity and TBW.

Typically, before the DDR4 cache becomes saturated, you can expect 3,250MB/s reads and 3,000MB/s writing, and write IOPs above 600k. That’s the good news, but the 4K Random Q1 numbers for both the 1TB and 2TB drive aren’t good.

Is this a problem? That depends on how you use it and if the drive is required to find lots of small files (not good) or a few large ones (very good). If you have an application that has many small files and plugins, it might be slower at launching with below-average 4K reads.

But others might have all their parts merged into larger resource containers, and they would be largely unaffected.

During benchmarking, I like to flood the controller with a large (50GB+) file transfer to see where the boundary is for cache use, and what the underlying NAND performance is like when it is exposed.

Doing this proved to be challenging, as the drive senses big write sequences coming and expands the cache dynamically to cope. If you do manage to exhaust the cache performance will drop to around 700MB/s.

That’s not the best raw throughput I’ve seen, but it’s far from the worst. 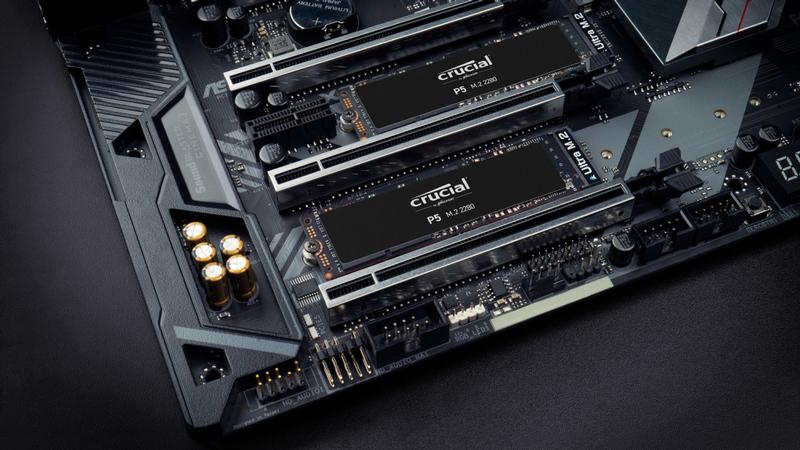 It’s an interesting approach to make the drive adaptive to what the system is doing, and this could deliver successively better performance over time.

One aspect that needs to be mentioned is heating, specifically how hot the P5 can get if you write large files to it repeatedly. The power efficiency of the controller appears to be a weak point, and the idling temperature of about 25c above ambient air can rapidly become 75c above it if the system doesn’t have excellent airflow or an integrated heat spreader for the M.2 slot.

It is yet another drive, like the Samsung 980 Pro, that needed a manufacturer-installed heat spreader by default, but sadly didn’t get one.

A quick calculation makes the best value drive per GB the 1TB model, reviewed here, and the worst being the 250GB followed by the 2TB option.

Normally, I’d advise you to seek out better deals on Amazon or other online vendors, but with Crucial, the difference in cost between shopping around and going direct from the manufacturer is either exceedingly small or non-existent.

For alternative options, read our roundup of the best SSDs.

The Crucial P5 is all the things that the P1 and P2 weren’t, and a bit more.

It has sequential performance that challenges the best PCIe 3.0 NVMe drives, but this isn’t a fantastic drive in respect of 4K random reads and writes, which is only an issue if that aspect is important to you. It can also get relatively warm, to the point of throttling, if you write large files for prolonged periods.

But where this drive excels is in value for money, with the 1TB drive costing $0.15 per gigabyte. Typically, the Samsung 970 EVO Plus is at least $0.17 per GB, more than 10% more expensive.

That might not seem significant, but if you need to fill a classroom with ten computers, you could be looking at a saving of $300 or more on drives.

For the regular user that isn’t interested in the transactional performance of the drive, but how fast the system boots and loads applications, the P5 is ideal.

There are faster drives available, but few that can match these prices for the same capacities.