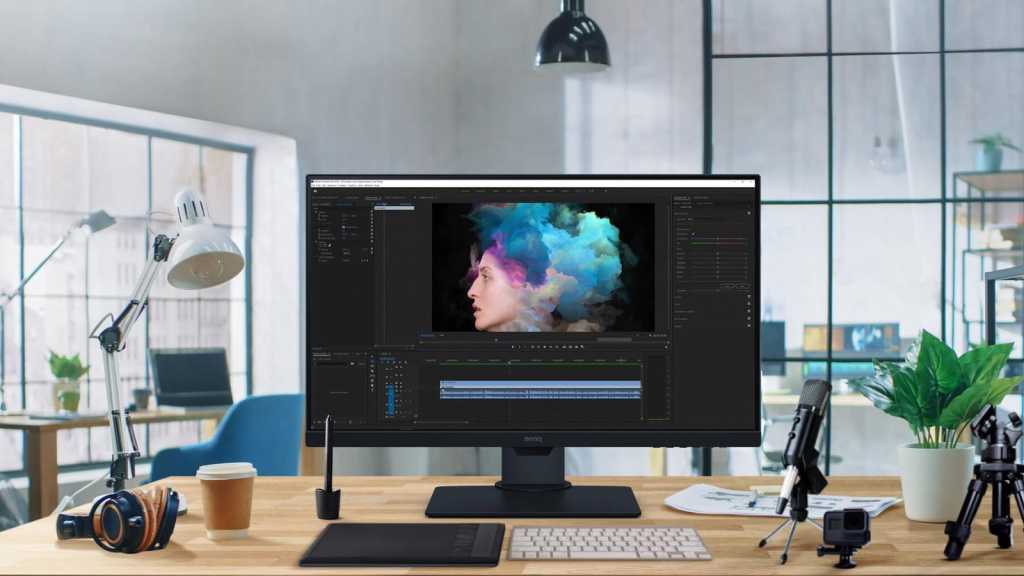 Apple MacBook users get an affordable monitor that is colour accurate and M-book mode, but this display isn’t cheap or an antidote for regular colour calibration.

For those aiming for a wide colour gamut with a decent contrast range, but not that interested in a high refresh, IPS (standing for in-plane switching) is the obvious choice.

A great example of how IPS technology can be tweaked to deliver a wide spectrum is the new BenQ PD2705Q. A monitor design laser-focused on those that work with colour professionally and use a variety of techniques to enhance chromatic accuracy and consistency.

The DesignVue PD2705Q isn’t a cheap display, but BenQ has delivered something decidedly different from what other display makers are offering.

Many of the recent BenQ designs I’ve encountered are excellent when it comes to getting them out of the box and on to a desk. That might seem like a minor thing, but over-complicated assembly and unbalanced structures are commonplace in monitors with adjustable supports.

The PD2705Q comes in just three main parts that consist of the foot, the support and the panel. The PSU is internal, as we prefer, and there isn’t any annoying-and-easy-to-break plastic cover over the ports.

Assembly involves attaching the foot to the support and then snapping that into the screen to lift it out of the styrene packing. The addition of a handle on the very top of the mount makes handling the monitor easier, and also reduces the possibility of back strain.

Included in the box are a DisplayPort cable, USB-C cable and USB downlink, and depending on the region you might also get an HDMI cable. But frankly, most people will have buckets of HDMI cables by now.

The PD2705Q is a 27in display that offers 2560×1440 (Quad HD) and can be configured to 10-bit or 12-bit (with HDMI 2.0) colour representation with dithering, from within the GPU driver configuration, if the driver software offers those options.

The IPS technology used in the panel has excellent 178-degree viewing angles, and with the 140mm of vertical travel on the stand, it is possible to use the PD2705Q in portrait mode just as easily as landscape.

The rectangular foot provides excellent stability but doesn’t take much desk space, making this a good choice for those that are ergonomically limited.

What the support doesn’t provide is much in the way of cable management, other than a hole that cables can pass through to funnel them together before they connect.

Another area it might have been better was in respect of the OSD (On Screen Display), not that the menu is an issue, but BenQ went with the old but cumbersome line of buttons control. Even when the buttons are lined up with the menu, this method never seems as intuitive a solution as a joystick.

But there is one feature on this monitor that for those who need it they will love, and that’s an inbuilt KVM (Keyboard-Video-Mouse).

The way this works is rather innovative since it leverages the ability USB-C to perform multiple jobs at once.

Imagine that you have a desktop PC connected via DisplayPort and the USB downlink enables the mouse and keyboard to connect to the PD2705Q. Then you connect a laptop using the USB-C port and cable, and you then use the OSD to select that machine as the source for the display via USB-C.

The KVM functionality dictates that once you’ve selected the laptop as the display, the mouse and keyboard automatically switch over to that system, and they switch back if you revert the source to DisplayPort.

That avoids the need for a docking station unless a wired LAN port is also required.

My only reservation about the Type-C connector BenQ provided is that while it will charge the connected laptop, it has a maximum output of 67 watts. Below the 85 watts that some laptops require to recharge or run their onboard GPU rapidly.

Another exciting diversion from the norm is a second DisplayPort connection to allow the chaining of monitors.

When DisplayPort first appeared, this was one of its significant advances over HDMI, but relatively few monitors ever had this feature, disappointingly. But it’s on here, for those that like tidy cabling scenarios.

But as impressively featured as this design is, people will buy this monitor primarily because of its display, so let’s talk about that.

As the foundations for this design, BenQ chose the LG LM270WQ4-SSC1 AH-IPS panel, and BenQ provides a production printed analysis of the used panel by its AQCOLOR process in each box.

The purpose of AQCOLOR is to provide consistent products calibrated in the factory to each panel with the right gamma, colour temperature, gamut, and uniformity adjustments.

Using this approach, BenQ has achieved both CalMAN verification and Pantone validation on this screen.

But this would all be moot if the monitor didn’t take into account the colour profile of the video subsystem that it is connected, and that’s considered by BenQ’s Display Pilot software, available for the PC and Mac. It combines the standard ICC colour profile information with that of the output device to achieve more accurate colour settings, or ICC Sync as they’ve called this function.

While adjustments are good, their use is dependent on the hardware being able to deliver the colours that the designer wants, and this panel goes further than most. The quoted gamut for sRGB is 100%, 78% on Adobe RGB and 85% of DCI-P3 coverage. And therefore, if you are working exclusively in either of the latter colour spaces, this might not be the design for you.

Exactly what colours are in the gamut are impacted by the Picture Mode chosen in the OSD, since that menu offers both REC.709 and sRGB as choices.

HDR on this display is somewhat token, as it only supports HDR10 and the backlighting and contrast offered by IPS isn’t anywhere near enough to handle the extremes that HDR needs. And, the lack of localised dimming is a major drawback for displaying HDR content.

On the plus side of this hardware are some unexpected bonus features that include the ability to take 4K signals and downsample them automatically. The decoding lag is also reasonably low, though the 60Hz refresh doesn’t allow enough scope for adaptive sync, and BenQ didn’t bother to implement it.

For most users, the factory calibration of this screen is probably good enough, but you might want to check that the gamma is right if you have a calibrator, as it was below the nominal level on our review hardware.

I also noticed that the ambient light sensor tends to be more aggressive with adjustments than I’d be happy with. But then for anyone working with colour accuracy consistency of the light around the screen is important, making this functionality a bit redundant to our minds.

In theory, with M-Book mode selected from the OSD, a MacBook Pro screen and the monitor should have a remarkably close colour representation, allowing them both to be used for colour adjustments simultaneously.

In testing, the PD2705Q performed slightly better than BenQ predicted with 79% of AdobeRGB and 88% of P3 coverage. Looking at the colour space overall, most of the extra space around the sRGB zone is focused on the red direction, with the green and blue components receiving much less space.

But the contrast levels are generally good, and the brightness is close enough to the quoted level for us to be happy. One issue with this screen, and it is generally experienced by all IPS designs, is that as the brightness increases, the backlight tends to bloom.

It only gets noticeable at about 80% brightness, but the excess light this generates can have a negative impact on detail in high contrast images.

Even with such a narrow frame, the designers managed to avoid backlight shadowing, and the illumination is very consistent across the display.

Overall, the PD2705Q is good, but maybe given the promotional material that BenQ released around it, created expectations that it could never realistically meet.

When monitor makers make displays that are approaching colour accurate, I’ve noticed that it impacts proportionally on the price.

Typically, a 27in panel of this resolution using IPS technology should cost around $240 or £220, and the BenQ PD2705Q is nearly double that price.

In the UK it can be found on Amazon for £403.98, and in the USA that translates to $399.99, which is on the expensive side for a screen this scale and specification.

Ebuyer has it for the same price but you can save a few pounds via Box.

The lack of greater than 60Hz refresh or adaptive sync options won’t make the BenQ PD2705Q a display that will attract gamers, and the extremely limited HDR choices also negate it as being ideal for video watching or editing.

However, it is possible to use it for both those jobs, since the decode speed is decent and it does at least have HDR10 support.

But for those editing photos or working with printed graphics, there is plenty to like here, especially if they use an Apple Mac alongside a desktop computer.

The colour representation is much better than a typical office monitor, even if most of the extended colour gamut leans towards the red side of the spectrum.

This design is promoted as ‘factory calibrated’, which to our thinking is positioning BenQ to fail in the minds of those who possess and use a calibrator regularly. We don’t all perceive colours or intensity identically, and while our BenQ PD2705Q came as acceptably configured out of the box, there is inevitably always room for improvement.

The biggest issue here is the price since there are other similarly specified screens in the market that undercut this design significantly. What the BenQ offers are the M-Book colour matching, ICC Sync and the excellent KVM functionality. But, I’m not wholly convinced that these alone are worth the cost difference between this and the Asus PA278QV, as an example.