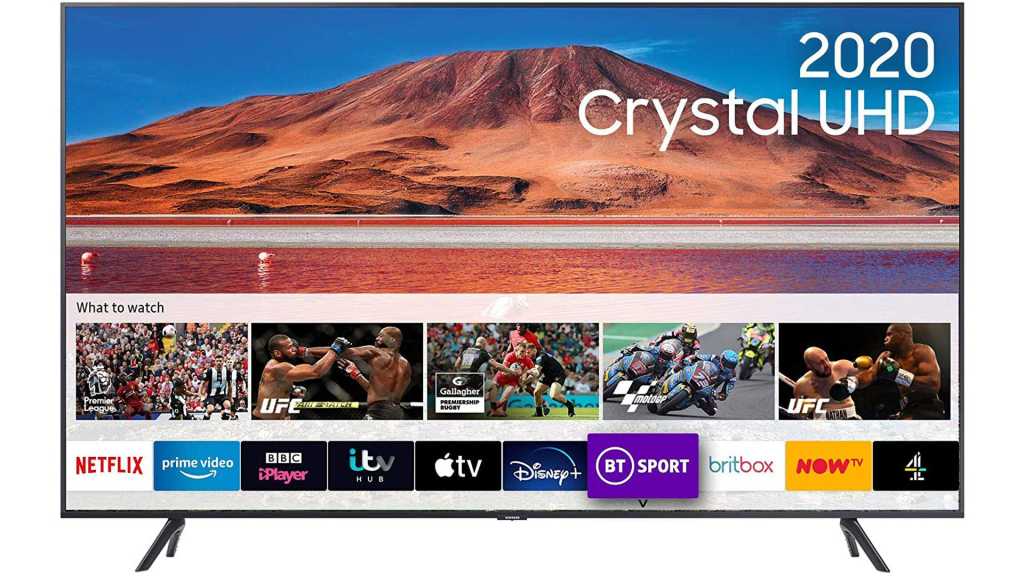 HDR-ready, with a comprehensive smart platform, this entry-level Crystal UHD Samsung TV will have them fighting in the aisles

It may come with a budget price tag, but this entry-level 43in Crystal UHD LED from Samsung has plenty to recommend it. While there’s no shortage of inexpensive tellies to be found, it’s reassuring to find Samsung offer more than another me-too flatscreen in the TU7100 (the TU7000 in the US).

Of course, just as a certain Starfleet Chief Engineer opined “Ye cannae change the laws of physics”, you can’t argue with the realities of manufacturing, volume production and retail. Compromises have to be made to keep things on the cheap and narrow. The question is just how significant they are…

The TU7100 (et al) won’t win any beauty pageants, but it won’t frighten the children either. Coming in Titan Gray, it adopts a perfectly acceptable, utilitarian design, with pop-in plastic feet and moderate depth. Viewed square on, the black bezel is acceptably slim.

There’s nothing here that could be construed as premium, but then we don’t particularly expect that of the brand’s Crystal UHD line of 7-series TVs. It simply looks like a flatscreen should. It comes with a standard zapper, featuring dedicated buttons for Rakuten, Netflix and Prime Video streaming services.

The spec is comprehensive, though. This 4K screen is HDR enabled, compliant with regular HDR and HLG, as well as HDR10+, the dynamic metadata standard currently employed by Amazon for Prime Video.

Connections include two HDMIs, one with eARC for use with soundbars, an optical audio digital output, two USB ports, Ethernet to support Wi-Fi, and a single terrestrial tuner.

The miserly HDMI provision is one obvious corner that’s been cut to deliver the advantageous price point. If you want to add a couple of games consoles, plus a telly box, you might want to invest in a switching box or AV receiver.

I found the Tizen UI simple to navigate, consisting of a launch bar and various what-to-watch recommendations.

Picture quality is generally good. One consequence of this particular screen size (43in) is that the benefits of UHD resolution are lost, even at quite close quarters. Any normal viewing distance wipes out the subjective difference between 4K and HD, but that’s fine because this isn’t a performance purchase.

Average picture levels are bright and vibrant, and most buyers will be happy with the results. The set can’t deliver truly deep blacks, but for the most part, pictures look dynamic enough.

Colour performance is average. It’s not a wide colour gamut panel, and this takes away some colour vibrancy. I measured peak HDR at 287nits. The set can’t deliver impactful specular highlights, but it makes a decent job of broader dynamics.

Ignorance is bliss so if you’re not used to a high-end TV then you may well not notice a lot of these points. We’ve also tested the Samsung TU8500 if you want to consider a mid-range option.

There’s the usual Samsung selection of image presets (Standard, Natural, Dynamic, Movie, Filmmaker Mode), of which the most effective here is Natural, which offers the punchiest imagery.

It’s worth rooting around in the menus to optimise the set. My suggestion would be to turn off ambient light detection and disable image interpolation, which here can be found under a Picture Clarity setting.

Audio is entirely rudimentary, utilizing two downward-firing stereo speakers driven by 20W of amplification. If you expect more from your audio, plan to invest in a soundbar and take advantage of that eARC connection.

The TU7100 makes for a decent gaming display, albeit not one that’ll particularly highlight next-gen consoles like the PS5 and Xbox Series X. With Game mode engaged, input lag was measured at a blisteringly fast 9.9ms (1080p/60fps). Hook it up to a Nintendo Switch or standard PS4 and you’ll be fine.

A large amount of them are under £500 going by the RRP, but the good news is that plenty of retailers have the TU7100 at discount prices. You can find for as little as £299 on Currys PC World and John Lewis at the time of writing.

It’s also available from a range of shops including Amazon, AO, Very and Argos.

Buyers should note that this very same set is also branded as the TU7000 and the TU7110. Same TV, different model designations and you’re likely to see it as the TU7000 in the US where it’s available direct from $279 and from Amazon.

Check out rivals in our best budget TV chart and if you have a little more to spend our best smart TV chart.

The Samsung TU7100 is obviously not a cutting edge display, but that doesn’t diminish its appeal. Not everyone needs the kitchen sink thrown in, and for the most part, this set is a pleasure to use.

It benefits from a solid smart platform in the shape of Samsung’s Tizen OS and has a picture performance that doesn’t disappoint for the cash.

More than two HDMI ports would be nice but if you’re looking for a superior cheap Samsung smart TV, this a genuine steal.