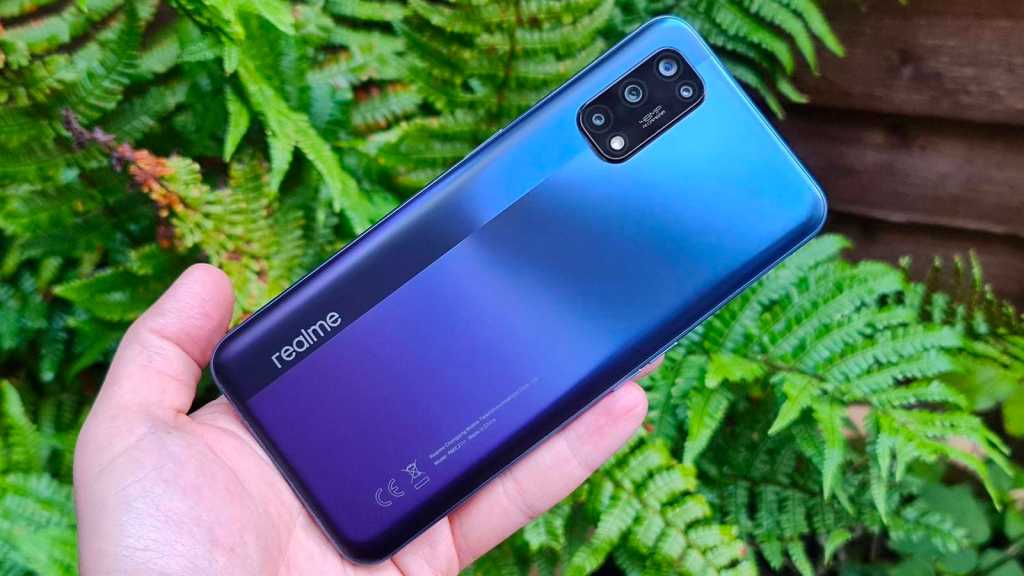 If you’re in the market for 5G connectivity on a budget, the Realme 7 5G proves that there’s no shame in going for the cheapest option. In fact, this phone punches well above its weight, considering what’s on offer for the money.

The Realme 7 line has pushed the envelope in terms of what you can expect from an affordable phone in 2020; with the standard 7 serving as a brilliant budget option, while the higher pricing of the 7 Pro edges it into the mid-range tier, equipped with some notable tricks to grab your attention.

While these devices staked their claim as noteworthy budget offerings back in October 2020, Realme actually had a third member waiting in the wings, in the Realme 7 5G.

While COVID and its effects on the company’s supply chain meant that the 7 5G wasn’t ready to launch alongside its siblings, one month on it’s no less potent a mix of impressive hardware at a low price – Realme’s bread and butter.

Despite the name, the Realme 7 5G isn’t just the base Realme 7 with a snappier modem, albeit with understandable similarities. It required a wholly different chipset in order to support such speeds and is one of the first phones through our reviews gauntlet toting MediaTek’s Dimensity 800U chipset.

So the question now is whether this remixed Realme is as much of a steal as its brethren.

There’s no mistaking the Realme 7 DNA within this phone’s design. It’s almost identical – in terms of dimensions and weight – to the standard model, meaning it’s a fairly sizeable and hefty handset, at almost 200 grams. The domino-like camera module, however, looks just like the one found on the back of the Realme 7 Pro.

The plastic back is comfortable to hold, proves pretty scratch-resistant (although Realme also throws a free case in the box for good measure) and sports the same split reflective design as the other two members of the 7 series; with a more understated overall finish than some of Realme’s other recent offerings (like the Realme X50 5G).

The single Baltic Blue colourway that the phone is offered in, with its satin reflective finish, adds an extra level of sophistication to the design, while also repelling smudges and fingerprints well.

Realme favours thin side-mounted fingerprint sensors, which in this case also doubles as a power button. It’s well placed on the phone’s right side and proves consistently responsive, with the option of an insanely speedy (albeit simple RGB-only) face unlock alternative, if you prefer.

For the price, it’s no surprise that there’s no official IP certification or anything of that nature but there is at least a layer of Gorilla Glass 3 offering some shatter and scratch resistance over the phone’s display, bolstered by a pre-fitted plastic screen protector.

Bezels are a little thick on all sides of the display, especially when it comes to the chin along the bottom, but it’s not so thick that when viewed face-on the phone could be considered ‘ugly’ or disproportionate.

The 6.5in IPS LCD on the phone’s front is pleasingly sizeable and sharp, making it great for enjoying media. While you shouldn’t expect the same vibrant colours and greater contrast of the 7 Pro’s OLED display, the 7 5G’s screen still grants you a great viewing experience all the same.

It trumps both other members of the 7 series with regards to its super-smooth 120Hz high refresh rate, paired with an equally respectable 180Hz high touch response rate, making it ideal for gaming.

If you do struggle with the sheer size of the 7 5G’s screen at all, there is the option of a one-handed mode, that shrinks down the UI within the phone’s settings; along with a number of display customisation options, including colour temperature control and refresh rate control (letting you lock it at 60Hz, 120Hz or have it set to automatic – the adaptive default setting).

The bottom edge of the phone plays host to its audio gubbins, with a standard 3.5mm headphone jack to the left of its USB-C port and a single down-firing speaker grille on the right. Loudspeaker quality is surprisingly good, with a pleasing level of clarity and range that means watching video content without headphones is wholly viable.

There’s also Dolby Atmos support, which offers a range of audio profiles to switch between, focusing on videos, gaming and music, respectively (there’s also an automatic mode too).

Realme UI – the company’s custom user experience, in this instance, running atop Android 10 – may technically only be in its first incarnation, but its foundations in Oppo’s ColorOS make for a far more polished product than you might expect if you’re new to Realme as a brand.

It makes some notable pulls away from Google’s stock take on Android but should still feel intuitive to those who’ve used a smartphone in recent years. Whether it works for you or not is more a case of personal preference, with regards to the aesthetic and interaction decisions it employs.

A host of supplementary experiences are what help give Realme UI its unique flavour. The Smart Sidebar is an ever-present quick-access menu for your preferred apps, as well as useful features like screen recording, while Game Space is both a place to house all your downloaded games but also a means of optimising both device performance and controlling notifications when gaming.

Going in, we were wholly curious as to how MediaTek’s Dimensity 800U SoC would handle – being a relatively unknown quantity – with the Realme 7 5G and Oppo’s Reno 4 Z 5G being the first devices in Europe to leverage this particular silicon.

In the case of the 7 5G, it’s paired with 6GB of RAM and 128GB of storage space, but perhaps most interestingly, the 800U makes this one of the first phones to boast 5G+5G DSDS (dual SIM, dual standby). This means you can enjoy both high-quality VoNR (Voice over New Radio) – the 5G equivalent of VoLTE – and 5G data connectivity across two compatible SIMs and plans. Great for those who roam or want more choice in which 5G services they leverage from which carriers.

As for raw performance, the Dimensity 800U inside the Realme 7 5G proves to be a formidable chip in the lower mid-range space, going toe-to-toe with the Snapdragon 690 in the OnePlus Nord N10 5G, as well as supposedly more powerful phones like Google’s Pixel 4a 5G, with its Snapdragon 765G – both pricier handsets outpaced by this more affordable device.

The 800U’s apparent penchant for gaming performance at this price point – as alluded to in the above benchmarking results – is also reinforced by its real-world gaming prowess, which allows for solid 60fps gameplay at high graphics settings in games like Call of Duty Mobile, supported by that rapid 180Hz touch response rate.

Like the standard Realme 7, you’ll find a capacious 5000mAh cell inside the 7 5G and also like the base 7, the 7 5G promises up to two days of use per charge.

While this might seem like an obvious expectation, even with such a big cell, the inclusion of a more powerful processor, a higher refresh rate display and 5G should all contribute to greater power drain. Instead – no doubt partly thanks to Realme UI’s stern power management and the Dimensity 800U’s smaller 7nm process – the Realme 7 5G matches, or in some instances, outperforms the 4G model’s power profile.

The phone doles out an impressive nine hours of screen-on time, which aligns well with those two days of use per charge cycle. There’s also the inclusion of 30W fast charging under Realme’s ‘Dart Charge’ branding.

In our tests, the included charger took that sizeable 5000mAh power pack from empty to 62% charge in 30 minutes – 4% more than the standard Realme 7 charged up in the same time frame. A full charge takes, on average, a sliver over an hour, which is also very respectable.

If, for whatever reason, you want to get more life out of a single charge of the Realme 7 5G’s battery, there are a number of methods on offer. Realme UI features both a power-saving and Super Power Saving mode, you can control app activity on a case-by-case basis and you have the option of dropping down the refresh rate manually, as mentioned earlier.

Considering the surprising amount of differences that set the Realme 7 5G apart from the standard 4G model, one area that remains unchanged is the camera setup and as such, it carries the same strengths and weaknesses.

You’ll find a 48Mp primary Samsung S5KGM1ST sensor on the back, accompanied by an 8Mp ultrawide and a pair of 2Mp sensors – dedicated to macro and depth (for portrait shooting), respectively. There’s a hole-punch front-facer that clocks in at 16Mp too.

Generally, so long as you’ve got plenty of light, you’ll capture decent shots sporting detail and colour good enough to grace Instagram, without fear of ridicule. Realme’s camera app makes it easy to add filters, toggle HDR shooting (best left on) and allows for AI enhancements (again, best left on, if you like a little more punch in your shots).

There’s also a decent amount of colour and contrast consistency when switching to the ultrawide snapper; typically less of a sure-fire thing as you move towards the more affordable end of the spectrum.

As for selfies, you should find that shots here that are crisp and offer good contrast, although colour saturation takes a noticeable hit by comparison.

The caveat when shooting across practically any of the 7 5G’s cameras is how they deal with available light. In bright shooting conditions, you’ll get the best the results but if your shot features a high contrast subject matter, it doesn’t take a lot to reveal the limits of this phone’s dynamic range; with the brightest parts either blowing out or the darkest areas losing detail and shifting to flat black.

The Realme 7 5G is available from 27 November and costs £279 in the UK, exclusively from Amazon.

The kicker is that its opening price tag actually clocks in at a discounted £229, as part of Realme’s Black Friday offerings (with this deal expiring on 30 November).

Beyond its opening discount, though, the Realme 7 5G works out to £100 more than the 4G-capable base Realme 7, costing the same as the Realme 7 Pro, which among other things, forgoes 5G in favour of a nicer 60Hz OLED display and snappier 65W fast charging.

If you weren’t aware, at the time of writing, the Realme 7 5G also lands the title of ‘Europe’s cheapest 5G phone’ and does so while undercutting competitors, including more expensive devices like OnePlus’ new Nord N10 5G and Google’s Pixel 4a 5G.

While the camera the weakest aspect of the Realme 7 5G, no part of this phone is inherently bad, especially considering what else is on offer at this price point.

Realme as a brand has been keen to make 5G accessible to as many consumers as possible and the Realme 7 5G is the perfect embodiment of this effort. They could have easily just found a modem/chip combination that allows for 5G connectivity and left the rest of the hardware untouched from the 4G model, while still charging £100 more – as was Samsung’s strategy with the Galaxy S20, for example.

Instead, the 7 5G brings superior performance, faster charging, greater longevity and a higher refresh rate display to the table to better justify the price jump from the standard 7.

When picking a new phone, going for the cheapest option is seldom the right course of action, however, when it comes to picking the cheapest 5G phone, thanks to the Realme 7 5G, it’s perhaps the best option.