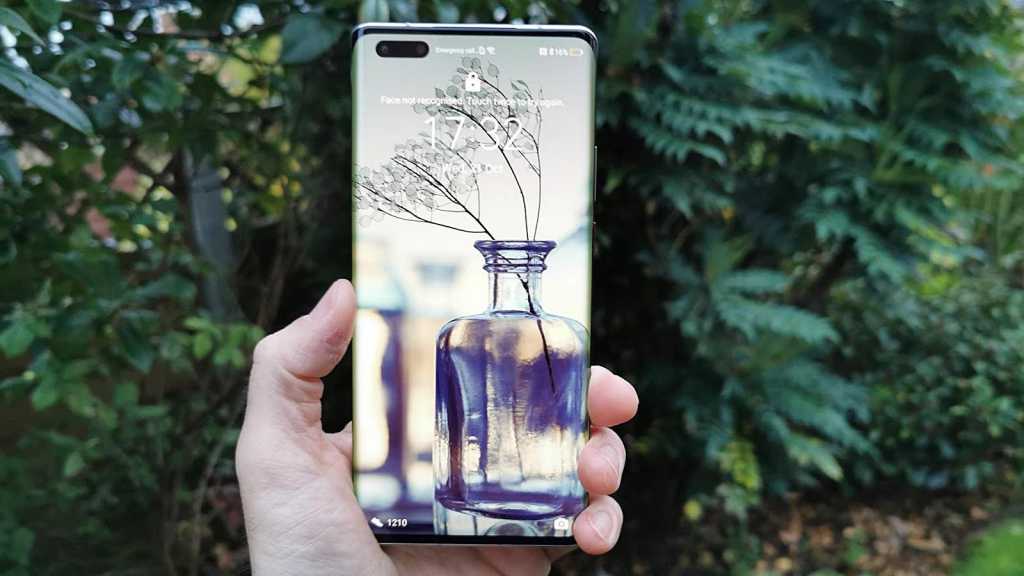 We can’t fault the hardware. Shame the same can’t be said about software.

I’ve had the Mate 40 Pro a month now and I’ve been waiting for a promised software update before writing this review. In the meantime, Huawei has decided to sell off its Honor business, cutting ties completely in the hope that the sub-brand will survive and live on.

The problem, of course, is that both Huawei and Honor are hampered by the same trade restrictions which prevent them working with US companies. And this causes not just the absence of Google services but also limitations in which components Huawei can put in its phones.

What this means is that the Mate 40 Pro could never score well in this review. Not because of the hardware – that’s exemplary – but because you can’t get and use the apps you want to run on it.

We’re not yet at a stage where Huawei phones don’t even run Android, but having tried the workarounds to acquire and run the apps I need on a daily basis, it’s just not good enough.

Using the web versions of some apps, such as Gmail, is something that grates when you’ve just spent iPhone 12 Pro Max money, while the total absence of the three banking apps I use is downright unacceptable.

I could spend a lot longer explaining which apps work (such as Twitter and Netflix) and which kind of work (the Nest app and Google Maps) but the fact is, there’s inevitably going to be one or more apps – and games – you want/need which simply won’t work on the Mate 40 Pro.

It isn’t Huawei’s fault, but it is the reality of owning any Huawei phone post the P30 Pro.

There are elements of P40 Pro and Mate 30 Pro here: this is very much signature Huawei design. Despite its sheer size, measuring 162.9 x 75.5 x 9.1mm, it’s not overly heavy at 212g. You get a clear TPU case in the box, which is nice, and a pre-applied screen protector to ward off those scuffs and scratches that you definitely don’t want marring this marvellous metal sandwich.

Of course, with a case fitted your hands miss out on some fantastic tactile sensations, such as the satin-finish rear and the way the front and rear curve smoothly to meet the polished metal frame.

Build quality is absolutely top-notch and the centrally positioned circle on the rear is unquestionably pleasing to look at.

Another inclusion that’s appreciated is the physical volume button, something missing on the Mate 30 Pro. This and the power button are easy to reach despite the phone’s tall form factor.

The 6.76in OLED screen has a resolution of 2772 x 1344 pixels – not the highest – and a refresh rate of 90Hz. Huawei boss Richard Yu said at the phone’s launch that they could have made it 120Hz or even more, but the cost in terms of battery life was considered too great.

It supports HDR10 and is, by all accounts, an excellent display. It’s bright, sharp and great for watching video.

Some may find the camera cutout a bit too large: it houses a 13Mp camera and a depth-sensing camera (not a secondary wide-angle lens) and can occasionally get in the way of what’s on screen. However, in the settings, you’ll find the option to hide the cutout, which puts a black bar across the top, becoming a thicker-than-usual status bar.

The Kirin 9000 is a new chip that uses a 5nm manufacturing process. This makes it both fast and power-efficient and now has 5G built-in.

One of the reasons I was waiting for a software update was because the Mate 40 Pro was refusing to install any benchmarking apps and even after an update did arrive, it still threw up the same errors.

This means I can’t say for sure what the numbers are, but this is a problem we’ve faced with previous Huawei and Honor phones. The Mate 40 Pro feels very quick though and, of the games which are available, they run very smoothly.

There’s no headphone jack, of course, but you do get IP68 water and dust resistance, USB-C and wireless charging, plus a dual-SIM tray which can accept one of Huawei’s Nano Cards to expand upon the 256GB of internal storage.

Stereo speakers make a welcome return: Huawei phones went through a period of using the display as the earpiece for phone calls, which meant mono sound for videos, games and other stuff.

Now there’s a proper speaker in the top edge, as well as the bottom.

Internally, were you to pry open the device, you’d find Wi-Fi 6, Bluetooth 5.2, 8GB of RAM, a 3D face sensor, an in-screen fingerprint sensor and a 4400mAh battery, among other things.

Since I’ve mentioned the battery, again, it’s worth also saying that the Mate 40 Pro has 66W SuperCharge fast charging and that a 66W power supply is included in the box.

This will get the battery from 0 to 87% in just 30 minutes, which is very impressive. There’s also 50W wireless charging, for which you’ll need a suitable Qi wireless charger. I only had Huawei’s SuperCharge Wireless Charger Stand to hand, which tops out at 40W.

Battery life is another figure I couldn’t get from benchmarking apps, but in general use, the phone lasted a good two days with light use. As ever, your mileage will vary depending upon how you use it, but it’ll last a day, comfortably.

The biggest attraction for many Huawei flagships is the cameras and the Mate 40 Pro doesn’t disappoint. Equally, it doesn’t really offer anything you can’t already get from other Huawei phones: a 5x telephoto zoom, a 50Mp main camera, a depth-sensing camera and an ultra-wide cine lens, much like the P40 Pro.

The latter has a 20Mp sensor, rather than the 40Mp unit found on the P40 Pro and P40 Pro+, while the 12Mp sensor behind the periscopic zoom is likely from the P40 Pro: results were very similar indeed with the occasional autofocus fail and soft resultant photos.

Overall then, photos are pretty much on a par with the P40 Pro, which is to say they’re some of the best available from any phone. The biggest difference is that the ultra-wide camera, with a 100-degree field of view, has a nifty ‘free-form lens’ which removes the normal distortion you get with this type of camera, where street lamps and telegraph poles at the edges of photos become noticeably curved.

And wide-angle shots from the Mate 40 Pro also look great.

Around the front, there’s a 13Mp ultra-wide cine camera with the same 100-degree FOV. This is a departure from the higher-megapixel units fitted to previous flagships. It defaults to a zoomed-in view for selfies but uses AI to detect when there are multiple people in the frame and auto-switches to the wider angle.

13Mp is plenty for detail and shots are pretty sharp, too. Plus, with the addition of the ToF camera, you get better portrait selfies with nice, blurred backgrounds. It’s even respectable in low light, although it’s the rear cameras which sparkle when the sun goes down.

Even if you don’t select the dedicated Night mode, you can get remarkable photos in dim conditions.

This uses the extra power available in the Kirin 9000’s ISP to process footage – including in 4K60 – for better dynamic range. With effective stabilisation and autofocus, video is one of the Mate 40 Pro’s strong suits.

Despite the problems with not being able to get certain apps, it is worth mentioning a few EMUI features. The Mate 40 Pro runs EMUI 11, which has a number of great new additions.

Specific to the Mate 40 Pro is what Huawei calls Eyes-On-Display or EOD. This differs from Always-On-Display (which is disabled by default) in that the new front camera system constantly monitors where your eyes are looking.

And it works surprisingly well. It’s actually creepy: even if you’ve put the phone on a horizontal surface, the screen will still light up when your gaze falls upon it.

There are also air gestures (as seen on the Mate 30 Pro) which let you navigate without touching the screen, multi-window – which lets you run two compatible apps at the same time – and the shortcut bar, which appears on the left or right when you swipe in from the edge and hold.

You can buy a Mate 40 Pro in the signature Mystic Silver colour pictured in our review or black, from Huawei’s website.

It’s also available in Mystic Silver from Carphone Warehouse and Mobiles.co.uk, either SIM-free or on contract.

You’ll find the latest information in our separate article, where to buy the Mate 40 Pro.

Typically, coming to a definitive verdict on a flagship phone is a difficult process. One has to weigh up a variety of factors including performance, battery life, cameras and a lot more.

I’d love to recommend that you do: the hardware is fantastic and it takes amazing photos and videos. But the situation with apps means that warnings are plastered all over the place when you view the phone on retailers’ websites. Even Huawei’s own site forces you to click an ‘Agree’ button on a warning message relating to GMS before you can buy one.

For those wondering if they can ‘hack’ Google services onto the Mate 40 Pro and turn it into the phone of their dreams, it’s not possible at the moment. Even if that changes, such hacks can be short-lived and at this price, it’s not what you’d call a safe bet.