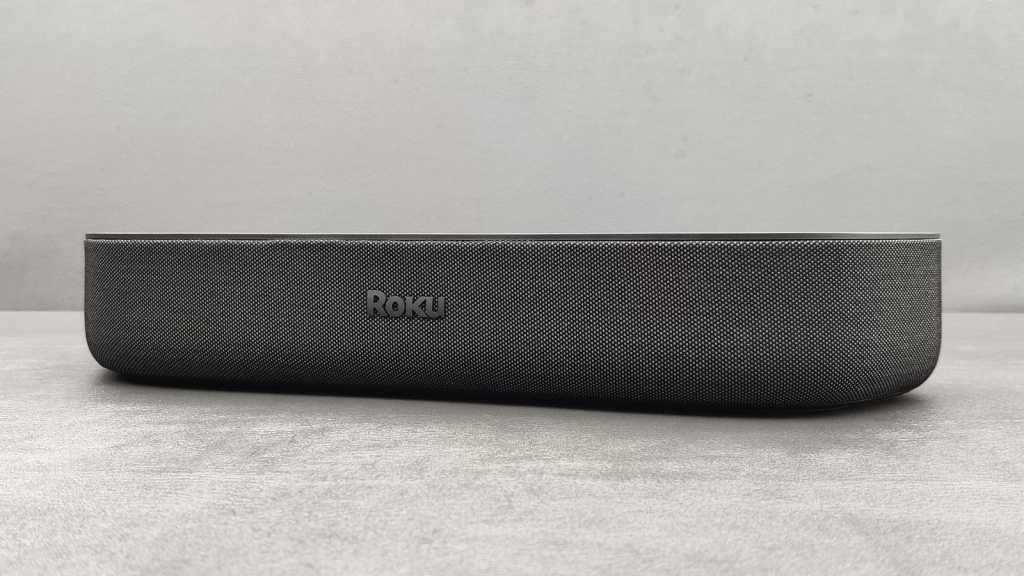 The ultimate home TV setup deserves the best content, decent sound and ease of access. Roku Streambar delivers, and at an incredible price.

Roku Streambar is a media streaming box unlike any other, powering up your home entertainment experience with both content and audio. An excellent media streamer, Roku Streambar may not be the world’s best soundbar – but it is the smartest.

It’s a common mistake to assume devices such as this are useful only for turning dumb TVs smart, with the Streambar able to significantly improve the viewing experience on even the latest and best televisions. Roku is also now the only platform that works with Amazon Alexa, Google Assistant and Apple Siri, making controlling all that media power a breeze.

This is a 4K HDR media streaming box that can also upscale content from 720p and 1080p resolution. Through its user-friendly software interface it places all the major movie-streaming platforms, on-demand and catch-up TV channels, online video and audio subscription services just a click away, simplying finding the content you want to watch and offering up useful recommendations for when you don’t already have something in mind.

Now with speakers and Dolby Audio sound processing built-in, the content doesn’t just look great but it sounds good, too.

If something’s going on show in the front room, especially sitting below what may be the most expensive piece of tech in the house, it needs to look good. The Roku Streambar doesn’t disappoint.

Although this is the first such device we’ve seen in the UK, Roku last year launched the Wireless Speakers and Smart Soundbar in the States. This is a more refined and more compact version (that is also now available in the US, Canada and Mexico). And when we say more compact, it really is – compared to other soundbars this 35x6cm box is positively dinky.

As the name suggests it is a bar, and as such is an elongated device that slopes round at the left and right ends allowing sound to fire out at all angles. This is not a rectangular block, however, and its smooth curved edges will help it blend into any home environment.

Its meshed fabric front is broken only by a small and unobtrusive Roku logo, while a blue LED shines from below when the device is powered on. The top surface is matte black, neither casting distracting reflections nor leaving messy fingerprints in sight.

All ports are hidden out of sight at the back, preventing messy cabling from being on show, and you can wall-mount it if desired using two M6 connections. There’s also a DC power jack here, with the Streambar requiring mains power unlike other devices in the Roku family, but the cable is usefully long.

You’ll also find HDMI-ARC, USB 2.0, an optical digital audio (Toslink) port and a reset button. There’s no other audio inputs/outputs, nor a headphone jack, but you can get around this using the mobile app and a pair of earphones connected to your smartphone.

The Streambar connects to the web wirelessly, but you can instead plug in a USB Ethernet adaptor; otherwise this USB port is useful for playing media stored on a USB drive.

A compact remote control is supplied in the box. Usefully, this can control your TV’s power and volume, and it also supports voice control. It has shortcut buttons for quick access to Netflix, Google Play Movies & TV, Rakuten TV and Spotify, but unfortunately these are not customisable.

The layout mimics that of the mobile app, and that of the remotes supplied with other Roku streamers, so it should feel familiar for existing users.

Setting up the Roku Streambar

Setup is simple, provided you have a relatively modern TV. Unlike other Rokus in the range, the Streambar requires an HDMI-ARC port that supports CEC (Consumer Electronics Control), a technology that enables the Roku remote to also control your TV’s power and volume settings.

If your TV is too old to be equipped with HDMI-ARC, you can use an ordinary HDMI port provided that you also connect the supplied S/PDIF Toslink cable – but some TVs may be too old even to feature this optical connection. It’s essential that you check the ports on the back of your TV before you buy the Roku Streambar, because without them it’s not much use to anyone.

Having connected the necessary cables, you’re prompted to connect the Streambar to Wi-Fi, allow it to download software updates, and then sign into an existing (or create a new) Roku account. If you’ve ever used a Roku device before, you’ll know that this account is necessary for you to enjoy a consistent user experience across all signed in devices, allowing you to add and manage streaming channels, subscriptions and more.

A quick tutorial later and you’re ready to go, controlling the Streambar either using the supplied remote control or the free Roku mobile app. You can use voice control by tapping and holding the button sporting a magnifying glass icon.

The interface is identical to that of any other Roku streaming device, with your default Home screen listing any streaming channels you have installed (for example Netflix, BBC iPlayer, YouTube and BBC News). You can scroll down the menu on the left to access options for My Feed, Search, Streaming Channels and Settings.

My Feed is in essence a content recommendation service that lets you find TV shows and movies that you can watch right now or are coming soon. With more than 150,000 TV shows and movies on offer here, something that can help to narrow down the choice is welcome.

The Search option is, in my opinion, one of the most useful software features of the Roku platform. It lets you search for particular content – perhaps the name of a film or an actor – across all streaming channels, showing you at a glance what services offer the movie or show and how much it will cost you if it’s not included with an existing subscription.

For someone who subscribes to Netflix, Amazon Prime, Now TV and Disney+, as well as using various catch-up services, this is an absolute god-send for that moment when you want to watch a particular show and can’t remember on which service it is provided.

Streaming Channels is the place to add new services, and though I’ve talked a lot about movies and TV content services there is also a variety of audio services available. Given the vast number of channels you could add to Roku, it’s much preferable to be able to select only the ones you want than have to scroll through endless menus of channels you don’t use in order to find what you need.

Last up, Settings. Once again, this will be very familiar to existing Roku users, but there is at least one new entry alongside the various system, network and display options: Apple AirPlay and HomeKit. Roku recently announced that it is adding AirPlay and HomeKit support to its entire line-up, making it the only platform of its type to support Amazon Alexa, Google Assistant and Apple Siri.

You can stream content to the Streambar from an Apple device over AirPlay (Bluetooth 5.0 streaming is also supported), and control the Roku using an Apple device.

With the software largely the same, then, the major difference between this Roku Streambar and other devices in the family is its audio credentials.

There are now four models in the Roku line-up for UK users: alongside the Streambar there is also the Roku Express, Roku Premiere and Roku Streaming Stick+ (you can even buy a full-blown Roku TV). All serve up content (the Express at HD rather than 4K resolution, also lacking HDR), but only the Streambar can additionally cater to your audio needs.

Concealed inside the box are four high-excursion 1.9in full-range drivers, with two facing forward for clarity and two angled to the side to help fill the room and create a more immersive experience. These are paired with Dolby Audio processing and precise digital amplifiers to provide cinematic sound.

This audio setup is almost certainly better than the speakers built into your existing television, and even if you’re already using a soundbar – potentially a better soundbar – to improve audio quality it won’t have the streaming smarts of the Roku.

While watching any content you can tap the * button on the remote to access Sound settings. It’s here that you’ll find a Night mode that boosts quiet scenes and quietens loud scenes, a Leveling mode that quietens loud adverts, and the ability to tweak Speech Clarity.

We were impressed with the Roku’s sound quality, which was consistent wherever we sat in the room. There is a time and a place for ramping up the bass, depending on what content you’re wanting to stream, so the ability to adjust this is especially welcome. That said, the Roku Streambar still isn’t as bassy as some competing soundbars even when the setting is boosted.

Streaming video can also be of high quality, with Roku building in support for 4K and HDR content (though it doesn’t support Dolby Vision), with upscaling supported from 720p and 1080p. Naturally your ultimate viewing experience will be shaped by the specs of your TV and of the streaming quality of the media itself.

Where to buy Roku Streambar

Roku Streambar costs £129.99 (US$129.99), making it a slightly pricey media-streaming box, but an eminently affordable soundbar. For the functionality it offers, we think it offers excellent value.

You can buy Roku Streambar direct from Roku, or via Amazon, Argos, Currys, Very or Littlewoods.

Roku Streambar is arguably the best media streamer out there – and also a capable soundbar, virtually unique in its ability to cater to both home-entertainment needs (see also: Anker Nebula Soundbar). It’s super-easy to use, and simplifies unearthing the best content. Fantastic value for money makes this a no-brainer: a great buy for all but the pickiest audiophiles.