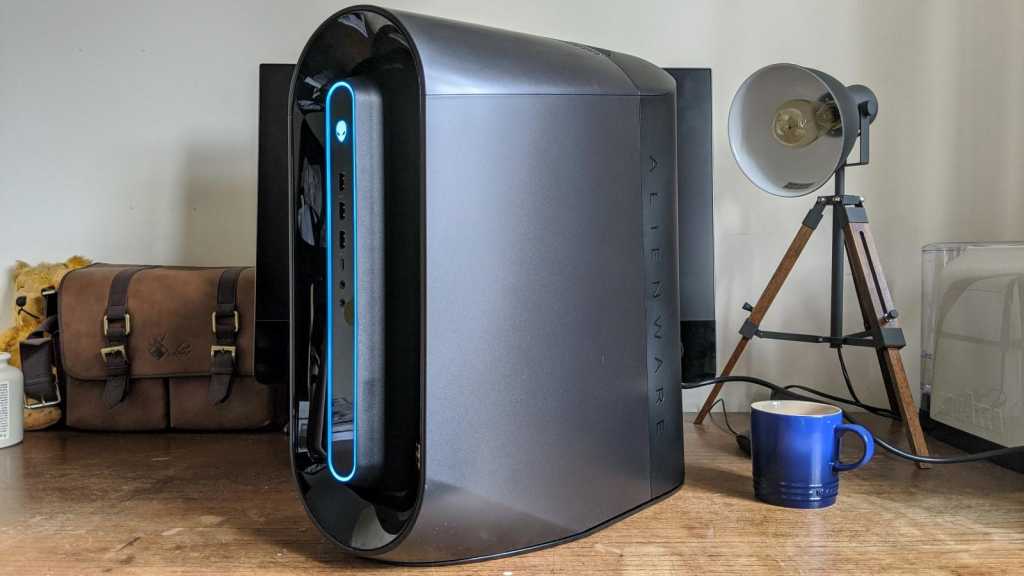 The Alienware Aurora R10 is extremely fast and well put together, with lots of options available to fit your needs. However, it comes at price, inside an absolute unit of a machine that’s a bit too loud.

Dell continues to update its range of Alienware gaming hardware and the latest Aurora gaming PC is a bit of a beast in more ways than one and comes in a range of prices and specs.

It’s a little confusing because you’ll find the Aurora in both R10 and R11 versions. I’m not testing the previous generation here because Dell is using those model numbers to differentiate Intel and AMD powered machines.

This isn’t made particularly clear, least of all on the official store which simply calls them the ‘New Aurora’ (that’s the R11 Intel range) and the ‘New Aurora Ryzen Edition’, which is the AMD option.

Over the years Alienware products have been pretty chonky and it became part of the style. Things have improved and although the firm has made some compact PCs like the X51, the Aurora R10 does not fit in the same category.

In fact, I’m not sure where it does fit. If it were a bus, you wouldn’t be able to say “You can fit a bus through there mate” and be referring to the Aurora R10 in good conscience. To say it’s a chonky boy is an understatement, it almost completely obscures a Dell 27in AIO on my desk in the photos.

This is the biggest PC I’ve ever tested so you probably get the point by now. Make sure you have space for it and, at a whopping 17.8kg, don’t go putting it on anything flimsy. The floor is probably the most suitable place.

Tucked under a desk doesn’t really mean missing out on the design either as it’s a little plain and the nicest bit is at the front. That’s certainly the case with the Dark Side of the Moon black model I was sent, the Lunar Light has more going on.

For a high-end gaming PC, from Alienware no less, there’s a surprising lack of lighting around the chassis. It really consists of the logo and the ring light. Note that the R11 has a slightly more interesting design at the front with more lights.

Some might like the minimalistic style, while others will prefer something with some glass and a lot more lighting going on. I quite like the sort of jet engine style front, which is for airflow not just show, but the rest is rather plain and basic.

A few USB ports and audio jacks on the front are handy but a card reader would be nice and despite the size, there’s no optical drive if you are wondering.

It’s easy enough to open the Aurora R10 up but it’s immediately clear why there’s no Perspex or glass panel in the side. There’s not much to see apart from a load of metal, a few wires and an empty space at the bottom – the PSU does swing out on a hinge to reveal the motherboard and GPU.

It might not be much to look at inside, but the Alienware hides some impressive specs. At the entry-level there’s an AMD Ryzen 5-3500, then there are three Ryzen 7-3700X models and a final four Ryzen 9-3900X options.

At the least you’ll get 8GB of RAM and an Nvidia GTX 1650 Super and the top-end model comes with the latest RTX 3090 with 64GB of memory.

There are plenty of choices in the middle and Dell gives you the option to customise certain elements should you want something dual-GPUs or more storage, for example. As mentioned earlier, you can get an Intel version by looking for the Aurora R11.

There’s also a wide range of storage options with some coming with just a 256GB NVMe SSD, while others also have a 1TB SATA drive for storage. Consider adding the latter or spending a little extra for more space which will quickly get full of games. It’s easy enough to add a drive later even if you’re a novice, though.

Performance from the model I tested is excellent and fairs very well against competitors, especially in 3DMark and Geekbench 5. The PCMark 10 score is a little lower than expected but nothing to worry about, the machine is extremely responsive.

The Aurora R10 will be perfectly suitable for work, even without getting the Ryzen 9 and the framerates here are spectacular. Over 200fps at the peak and running Wolfenstein and Far Cry and 4K resolution still threw back results over 60fps apart from Far Cry on Ultra settings, which was 55fps.

It’s nice to see Alienware’s own liquid cooler fitted to the CPU which does a good job. However, the Aurora R10 can be extremely loud when the fans decide to go for it, which happens a lot so having it under your desk will help in this respect.

A  gaming headset will be a good choice no matter where you put the Aurora R10.

There is such a wide range of Aurora R10 models that I can’t it’s a budget, mid-range or otherwise machine.

If you do like the look of a machine but want to tweak something, Dell offers you some choices when it comes to the processor, GPU, memory and storage. Oddly, I can’t seem to find the combination of specs I tested as none of the Ryzen 9 machines have the option for a Radeon card but you can pair this with a Ryzen 7.

Direct is the best way to view the range and make use of the build-to-order option. Retailers, as is often the case, just have selected models. You can buy the Aurora R10 and R11 from Currys PC World, Amazon and Very.

Check out our chart of the best gaming PCs to see what other options you have.

With such a wide range of models on offer, it’s hard to say in one fell swoop whether the Alienware Aurora R10 is a great machine.

On the one hand you could get one for under £1,000 which seems like a deal but there is some strong competition here – not least the AlphaBeta i5 RTX, which has a 2070 GPU.

At the other end of the scale, spending over £4,000 on a gaming PC will be too rich for most people so it’s the mid-range Aurora R10 models that make the most sense, especially as you can customise many elements to your needs.

Even then, it’s likely you’ll be able to find the same or similar components inside a cheaper machine such as the PC Specialist Magma R2.

There’s plenty of performance on offer here as well as decent specs elsewhere, but you are paying for the Alienware branding somewhat and sadly, in this case, quite literally means a huge gaming machine that’s got liquid cooling, but the fans are extremely loud.

You’ve really got to want the banding and style on offer here to splash the cash over a rival.