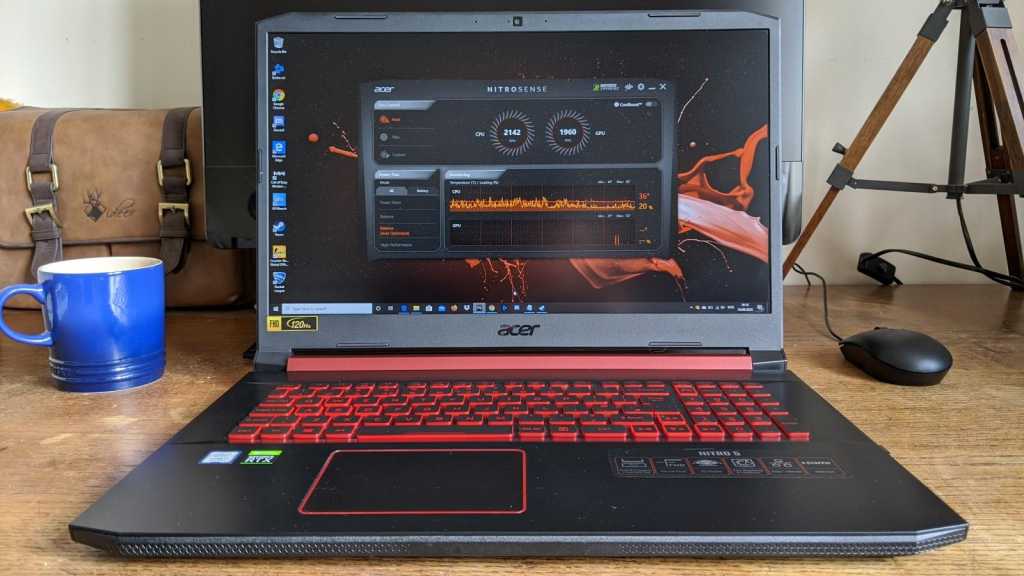 If you want maximum frames per second on a big screen at an affordable price, the Acer Nitro 5 does just that. Albeit with a few caveats.

Gaming laptops are expensive, but you can find some for more affordable prices. Acer is known for good value computers and the Nitro 5 is a great example of this, offering decent design and specs for a reasonable asking price.

There are certainly some caveats here, but it’s impressive to find an Nivida GeForce RTX 2060 inside a decent gaming laptop for under £1,000.

First things first, this isn’t a portable gaming laptop so look elsewhere if that’s what you want.

At 28mm thick and 2.6kg and, this should really be considered as a desktop replacement that can travel if it’s necessary. That’s not too bad for a gaming laptop with a 17in screen but you will certainly know it’s in your backpack – if you have one big enough to fit it in.

The build is plastic but feels pretty solid overall, but there’s not a whole lot going on if you’re looking for gamer flare. The Nitro 5 doesn’t have any fancy RGB lighting around the chassis so it’s the red section of the hinge and the red edges of the keys that stop it being a plain black brick.

I like the angled vents at the back but you’re unlikely to see those often. More of an issue are the slightly chunky bezels around the screen which make the Nitro 5 look a tad dated.

The plus side to a gaming laptop of this size is that there’s plenty of space for things so you get plenty of ports including Ethernet, HDMI, three USB-A ports and USB-C. It’s a shame to see the SD card slot dropped, though.

An annoying design point is that the power plugs into the right-side of the laptop rather than at the back so gets in the way somewhat – especially if you have a mouse on that side. This issue has been fixed on the slightly newer A517-52 model.

The Nitro 5 offers a full-size keyboard, complete with number pad and a large trackpad. The chassis has a good amount of room to rest your wrists, too.

The keyboard is decent, which isn’t always the case for more affordable gaming laptops. There’s a backlight with four levels of brightness and the WASD keys, and the arrows, have a bold red outline to help them standout.

Acer’s keys are comfortable with nice feedback and a satisfying click sound. It’s decent for both typing and gaming.

The trackpad might be responsive, and the palm rejection works well, but there are no dedicated buttons and it’s all a little bit creaky. You will need a gaming mouse, really.

Displays on cheaper laptops tend to be a commonplace where they fall down, but the Nitro 5 is decent at first look. It’s Full HD in resolution, uses IPS panel technology for good viewing angles and offers a 120Hz refresh rate for smooth performance.

It’s good and the measured brightness at 284 nits is by no means the worst we’ve seen. It’s not bright enough for outdoor use if you are planning some sort of garden LAN party.

However, the display falls down on colour. Testing it with a Spyder XPro, the Nitro 5 can only offer 65% of sRBG and 48% of Adobe RBG. That’s not good and means that those AAA games you’ve splashed your cash on don’t get the vibrancy they deserve.

The stereo speakers are decent enough to watch a sitcom on Netflix but they’re nothing special and for gaming you’ll want to use a proper gaming headset.

The Acer Nitro 5 I tested comes with an Intel Core i7-9750H processor which has six cores and 12 threads. Its base clock speed is 2.6GHz and it can boost up to 4.5GHz.

Note that Acer has now launched models of the Nitro 5 with 10th-gen processors. This model is the Nitro 5 A517-52.

Accompanying the Core i7 is an Nvidia GeForce RTX 2060 GPU with 6GB of memory. Nvidia’s 3000 series has arrived but we’re not seeing them in laptops yet and the 2060 remains a solid GPU choice.

Acer has fitted the laptop with 8GB of DDR4 (2600MHz) RAM and a 256GB SSD. That’s nothing special but you really shouldn’t expect more for a budget gaming laptop.

The important thing here is that you’re getting the powerful RTX 2060 for one of the lowest prices around. The result is impressive performance, keeping up with more expensive laptops.

The Intel chip isn’t the fastest around as you can see from the benchmark results but it good enough for mainstream gaming and will get you through work tasks, too. If you do feel like you need more power, look to an AMD-powered rival.

Acer has made the Nitro 5 expandable though, so you could add more memory which would help without adding too much cost. It can really help performance as we’ve found with other laptops.

Here you can see how it performs compared to similar laptops, the Asus TUF A15, Dell G5 15 Gaming, Lenovo IdeaPad Gaming 3i and Acer’s more expensive Helios 300 which also has an RTX 2060.

Find out  how we test laptops.

The included NitroSense software gives you some performance information and well things like the ability to control the fans.

There are not many other specs to talk about apart from dual-band Wi-Fi, Bluetooth 5.0 and a basic 1Mp webcam that can’t be used for Window Hello. At this price, it’s no surprise that Acer has decided not to include anything fancy like a fingerprint scanner.

Battery life is nothing to write home about with a time of six hours and 33 minutes in our test, which loops a video at 120 nits brightness. It’s middle of the road and when gaming you’ll be lucky to get more than two hours away from the mains.

The Nitro 5 does charge a reasonable amount in 30 minutes, able to top up to 31% battery in that time.

Unlike some gaming laptops, there aren’t too many models too choose from here. I’ve tested the A517-51 to be specific and this model has a 9th-gen Intel Core i7 and RTX 2060 graphics card.

Overall, Acer has done a great job of building a 17in gaming laptop for those on a tighter budget. Coming in at under £1,000 in the UK but you get a Core i7 chip, 120Hz screen and, most importantly an RTX 2060 GPU.

This means, the Nitro 5 can keep up with much more expensive laptops so if you’re looking for raw performance inside a desktop replacement without breaking the bank, this is an excellent choice.

The Nitro 5 also has plenty of ports and a nice keyboard, but there are inevitable downsides to a cheaper gaming laptop.

Most are perfectly acceptable like the plainer design and plastic build, along with a few basic specs. However, the main issue here is the poor colour performance from the screen making games look somewhat dull.