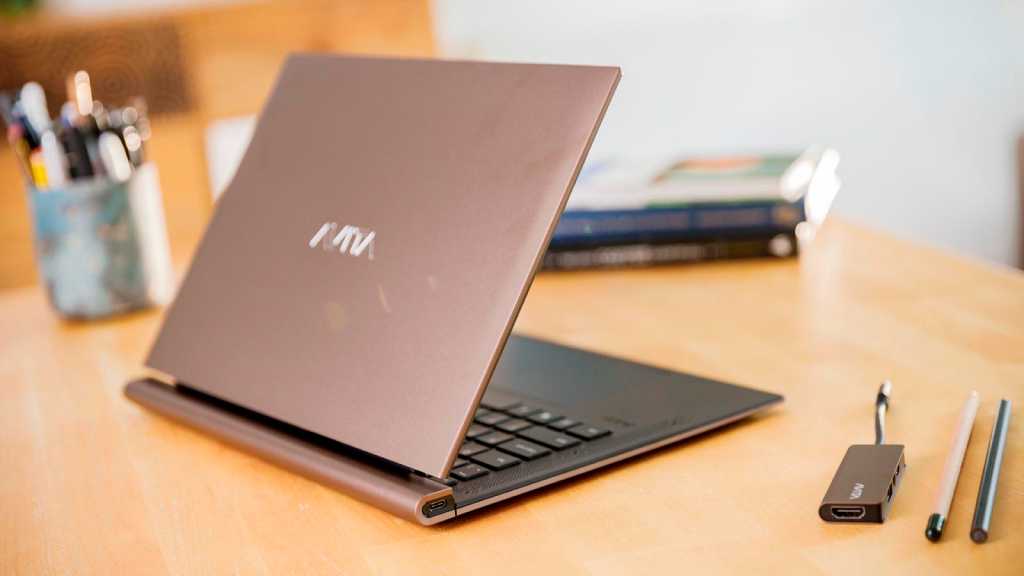 Despite a meagre battery life, it’s hard to dislike the Admiror: it’s beautiful, slim, and capable. Just don’t lose the connectivity dongle, or you’ll be stuck only with two USB-C ports.

Avita isn’t backing down. The US-based Chinese company undeniably aims to carve out a niche in the US and European markets. Since 2019, it’s steadily released a series of laptop ranges that include the mid-range Liber, budget Pura, and now the high-end Admiror.

Avita thoroughly impressed me last year with the gorgeous  paisley-patterned Liber – however, its budget follow-up, the Pu ra, left me underwhelmed. Here’s why Avita manages to turn it around with the Admiror.

The Admiror is striking. The model I reviewed is in Blazing Brown – a matt metallic tone that’s imaginative and playful but still maintains a professional, premium look and feel.

The hinge is particularly eye-catching. Avita claims the curved look is inspired by the “renowned flying buttress of the Gothic design”. While that sounds like a stretch, the point still stands: the Admiror looks wholly unique and just cool. Your friends will be impressed.

At 1.32kg, the Admiror isn’t super lightweight, but it offers an incredibly thin profile, measuring just 9mm at its narrowest point. The weight is also balanced between the display and keyboard which makes it easy to lift the screen with one hand while the base stays put.

The most surprising aspect about the Admiror is its lack of ports. All you get are two USB-C ports on either side – not even a headphone jack. Though, conveniently either port can be used for charging.

Luckily, the Admiror comes with a dongle that includes all your essentials: HDMI, USB-A, another USB-C, and of course that headphone jack.

Whether this is a good idea or not totally depends on your preference. I like that the lack of ports keeps the Admiror slim and trim, but also recognize that there’s a risk of losing or damaging the dongle, in which case you’re left portless.

As for wireless connectivity, you get dual-band AC WiFi but are restricted to Bluetooth 4.2. The lack of Bluetooth 5.0 shouldn’t really be a problem unless you want to connect to multiple devices at once.

The Admiror’s keyboard manages to be both compact and spacious – and the additional backlight option makes the whole machine look a lot more premium than the price you’re paying. There’s even a fingerprint scanner integrated into the power button for added security when powering on.

It took me a couple of days to get a feel for the layout and spacing, especially without a number pad, but otherwise, the keyboard is a pleasure to use.

There is some travel with the keys, though, so don’t expect totally silent typing – but whether this is an issue is again a matter of taste. I personally found the clickity-clacking of keys satisfying, but students in libraries and office workers in shared spaces may be less welcoming of such enthusiastic typing.

Like the Pura, the Admiror offers a large trackpad. This, however, means your hands have to stretch to reach the keys, which may take some time to get used to. The trackpad is responsive and effortless to use, though, and thankfully, there is good palm rejection – so if your wrists do graze the trackpad, it won’t set your cursor rogue.

The trackpad accepts both mechanical clicking by physically pressing down on the bottom edge, and gestures – that is, tapping and two-finger tapping for left and right-clicking. I preferred using the gestures since it requires less exertion.

I love the Admiror’s 14in IPS display. Colours look warm and vivid, and my goodness is it bright! At full whack, the Admiror reaches 349 nits, which is comparable to the Microsoft Surface Book 3, which costs over twice as much as the Admiror.

If you need a machine to stream content, you can be certain films and videos will look great on this device. The Admiror offers Full HD resolution at 1920 x 1080 on a non-touchscreen display, but Avita says a 4K touchscreen model is on its way.

The narrow bezels are also welcome and only add to the Admiror’s premium look. They measure just 7mm on either side, though are thicker at the top and bottom. You’ll also find the 720p webcam at the top. The picture quality is decent but slightly undersaturated. But if you’re wondering: yes, it will suffice for your all your Zoom requirements.

The Admiror model I reviewed offers 8GB RAM and 512GB internal storage, along with an AMD Ryzen 7 3700U processor and integrated Radeon Vega Mobile Gfx – handy for casual gaming and video.

Overall, you can expect smooth reliable performance from the Admiror. The laptop can handle multiple open tabs (on different browsers), running alongside Spotify and YouTube. It was also responsive and nimble when I used the digital audio workstation Reaper to record MIDIs from my digital piano.

You should have no issues using it for day-to-day work, browsing, light to moderate gaming, and even Photoshop. Though I wouldn’t recommend overloading it with many demanding applications at once.

In our benchmarks, the Admiror was generally in step with similarly specced, but much more expensive laptops. In the PCMark 10 test, the Admiror surprisingly outperformed Microsoft’s Surface Book 3 (Intel Core i7), which starts at £1,599.

Meanwhile, a Geekbench 5 test revealed the Admiror is closest to the LG Gram 14 (also Core i7) in performance, even though the Gram 14 costs £1,349. The Admiror even massively outdoes the Gram 14 in the 3D Mark gaming test.

Where the Admiror disappoints is battery life. Though you’re promised 10 hours on the box, the Admiror lasted just under five hours in our test (where we loop a film until the battery dies).

Of course, real-world battery drainage varies depending on what you’re doing, so you may be able to squeeze out longer life.

If you’re looking for more reliable battery life, however, you’re better off with the Samsung Galaxy Book Flex, or any of these excellent laptops on the market right now.

Of course, the benefit of USB-C charging is you could keep your laptop powered longer with a laptop power bank with PD (power delivery) – but that’s an additional cost for an issue you shouldn’t really have to deal with.

The Admiror’s price its biggest advantage. At £799/US$999.99 you get solid performance and bonus features like a fingerprint scanner and keyboard backlighting all wrapped into a gorgeous, premium-looking design.

The Admiror is available from Currys PC World, JD Williams, and eBuyer in Blazing Brown, Flaming Copper, and Delight Pink.

In the US, the Admiror is available directly from Avita with an Intel Core i5 processor for $999.99, which isn’t as good of a deal. Customers can also find it on Amazon and the Home Shopping Network.

The Avita Admiror is a winner. It looks fabulous, performs smoothly, and is priced competitively.

Its biggest drawback is its battery life which can dissuade shoppers who travel often, or don’t have time to stay tethered to the power mains. There’s also the lack of ports on the device itself, barring two USB-C points, either of which can be used for charging. The HDMI, USB-A, and headphone jack are all relegated to an external dongle that ships with the laptop.

But these grievances can be excused when considering that for its price, the Admiror offers a performance that can rival major more expensive brands like Microsoft, Samsung and LG – while also managing to look wonderfully eye-catching.

If value for money is your primary concern, the Admiror is definitely a worthy purchase.