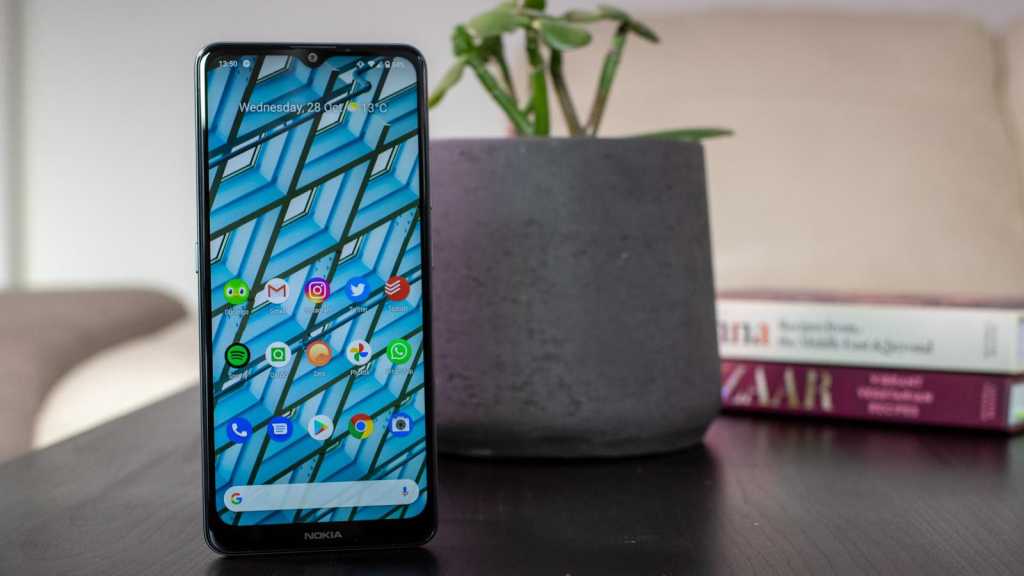 Performance is too inconsistent for me to sing the Nokia 2.4’s praises, but if you’re willing to be patient it will get the job done, and you could do a lot worse for £99.

This is about as cheap as you can go for a new smartphone, but despite that Nokia promises perks including a 6.5in display, two-day battery life, and night mode support on the dual camera.

It should go without saying that at this price there are inevitable compromises however, most notably some serious slowdown from a processor that often struggles to keep pace with the demands of modern apps. That might just be the price that you have to pay for a phone this cheap though.

One thing I can’t deny is that the Nokia 2.4 looks the part. You wouldn’t mistake it for a flagship – there’s no glass back or curved edges – but Nokia has done a great job of bringing its polished Nordic aesthetic even to this budget segment.

Available in only the Charcoal finish in the UK and US (though other colours are available elsewhere) the phone has a plastic back with a subtle colour gradient. The ‘3D nano-textured’ finish sounds fancier than it is, but really means it’s easy to get a good grip on the handset despite its size, and it feels sturdy and secure.

With a 6.5in display the phone is inevitably big, but Nokia has kept it surprisingly thin and light – it still weighs less than 200g, so it never feels too bulky. The screen is only 720p, rather than full HD, but it’s bright and colourful, and detailed enough for checking out your photos or watching YouTube if you’re happy to drop the resolution down a bit. Most people will find this absolutely fine.

There are fairly thick front bezels, especially the chin with the Nokia logo emblazoned on it, but that’s typical at this price really, as is the teardrop notch for the selfie camera. On the rear you’ll find the two main camera lenses, together with a fingerprint scanner.

As for ports and buttons, you get a headphone jack for wired audio, though disappointingly only Micro-USB for charging – even at this price I’d expect to see USB-C by now. In addition to the power and volume buttons you also get a dedicated Google Assistant button on the left side.

Still, for a phone that costs less than a hundred quid, something’s gotta give. Sadly, in this case that’s performance.

The 2.4 is powered by a MediaTek Helio P22 processor, and in the UK and US it comes with 2GB of RAM and 32GB of storage. That is… not a lot, though you can at least expand the storage with a microSD card if you need to.

With a slow processor and such little RAM, it’s inevitable that the 2.4 would feel sluggish. At times it’s fine – darting around the clean, minimalist Android One interface the phone is perfectly fast, but opening apps can take an age, multi-tasking is impossible, and total system freezes aren’t uncommon.

Even some core parts of the phone experience suffer from stutter. That dedicated Google Assistant button is more of a liability when opening the Assistant tends to lock the whole phone down for 30 seconds, and I missed more than a few photo opportunities because of camera lag. Even taking a photo while listening to music once proved too much for the poor thing – the moment I hit the shutter button Spotify crashed and my music died.

When you do manage to take a photo results are far from exceptional, but honestly they’re impressive for the price. Nokia has kept things simple with a 13Mp f/2.2 main lens supported by a 2Mp depth sensor for portrait mode on the rear, and a single 5Mp f/2.4 selfie lens on the front.

The biggest challenge for photos is that the focus can sometimes be a bit soft – the result of that software stutter – but in good lighting colours are vibrant, and when the focus is on form the level of detail surprised me.

You also get support for both portrait and night modes. The former is up-and-down – you get a lot of control over the blurring, even with custom effects, but ropey edge detection means a close inspection will still reveal blurred hairs and the like. Night mode is much better though – there’s a definite softening of detail, but colours are spot-on.

A generous 4500mAh battery delivers two days of battery life, though only just – but at least you won’t have to stress about charging it every single day in case something goes wrong. When you do charge it’ll be slow though – Micro-USB limits speeds, so the 2.4 charged up just 16% in half an hour, meaning you’ll most likely want to plug this in overnight.

A final note on software. The 2.4 runs on Android 10, but Nokia says the phone is ready for the Android 11 upgrade. The company also promises two years of software updates and a third of security patches, so there’s the hope of longevity – though I’d expect the hardware here to slow down too much to keep you on the phone for three years.

You’re also getting the benefit of the clean, streamlined stock experience of Android One. It’s attractive, lightweight, and user-friendly, and a key edge for Nokia in the budget phone market – while some Chinese brands can offer much stronger hardware around this price, they often come with software that’s restrictive, unappealing, or packed with bloatware.

There are few other phones quite this cheap on the market right now, which makes it hard to compare. The closest comparable rivals are Motorola phones like the E6s, which tend to offer a similar overall experience – you won’t find anything much better than the 2.4 at the same price.

However, if your budget can extend a little further it is worth it. The £179 Realme 7 offers higher specs across the board, and the £199 Poco X3 goes even further, borrowing some features from flagship spec sheets. If you can afford either of these the extra money spent will be well worth it – but if not, the Nokia 2.4 is a good option for those who really can’t go beyond £100.

There’s no getting away from the fact that the Nokia 2.4 is a budget phone, and a lot of the time it really feels like one, with sluggish performance and an unreliable camera.

But then you’ll take a surprisingly good night mode shot, watch something on the spacious 6.5in display, or hit one of the moments when the clean OS lets the phone fly, and it feels like so much more.

Performance is simply too inconsistent for me to sing the 2.4’s praises, but if you’re willing to be patient it will get the job done, and you could do a lot worse for £99.