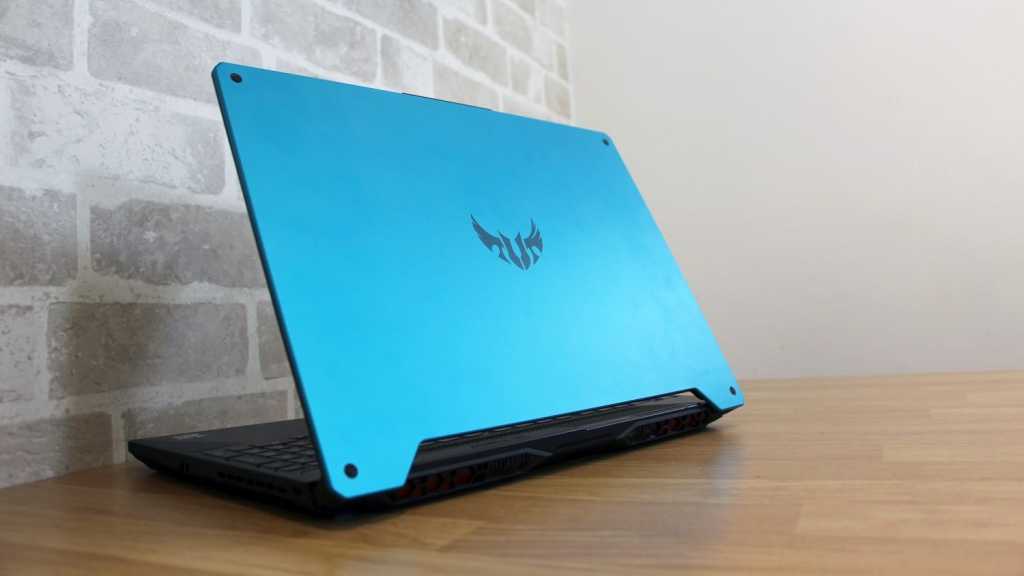 The Asus TUF Gaming A15 looks bold, and it’s got solid Nvidia and AMD hardware alongside decent ergonomics, but potential component issues hinder it – and it suffers thanks to a poor screen and mediocre connectivity. It’s not bad, but there is plenty of strong competition

There aren’t many areas of tech as hotly contested as gaming laptops, so laptops like the Asus TUF Gaming A15 need to squeeze every penny out of their relatively small budgets.

This machine deploys a solid Nvidia GTX or RTX graphics core alongside one of AMD’s best new Ryzen mobile processors – and a bold exterior design. Its price is tempting, too: in the UK this machine costs £899 for the model tested here and can be found for even less.

In the US the specification is a little better and costs $999.

The boldest part of the A15 (this is the FA506 by the model number) is the lid: it’s finished in a vibrant electric blue, with a large TUF logo in the middle and military-style accents. It’s divisive, but if you’d like an eye-catching machine you could do far worse. A grey model is available if you’re not so keen.

At the rear, there are sizeable air vents, and on the inside, you’ll find brushed metal going in different directions, a sunken keyboard, a diagonal speaker grille and raised plastic. The blue lid might look sleek, but the interior is a little messy.

The TUF A15 doesn’t push boundaries when it comes to dimensions – its weight of 2.3kg and 24mm thickness are entirely normal. There are no surprises when it comes to build quality, either – the Asus is strong enough to sling into a bag thanks to a robust exterior, but there’s too much give around the keyboard and trackpad.

The A15’s rivals are similar. The Dell G5 15 Gaming (5500) has virtually identical dimensions and build quality, and its glittery design is just as divisive. The Lenovo IdeaPad Gaming 3i is similarly sized but it looks more discreet and mature.

Asus offers two full-size USB 3.2 Gen 1 ports and a Type-C connection that supports DisplayPort, and it’s paired with an HDMI output, Gigabit Ethernet and an audio jack. The base panel pulls away to give access to the SSD, a spare M.2 socket and both memory slots.

There’s no fingerprint scanner or card readers here, and its 720p webcam has mediocre quality and no Windows Hello integration to log in with your face. There are no faster USB 3.2 Gen 2 ports and no Thunderbolt.

Dell’s machine has a fingerprint reader, a card reader and Thunderbolt if those are important.

The TUF A15’s keyboard has 2mm of key travel, which is more than most laptops, and the layout is solid; there’s a number pad, the cursor keys are separated and the space bar is extended. The buttons are slightly concave, and the keyboard has RGB LED lighting, albeit in just one zone. There are also no macro key options on this laptop or in its software.

The ample travel helps the A15 deliver a good typing experience. The keys are consistent and comfortable and extremely quiet, with decent speed. For slower games, mainstream gaming and casual titles they’re great, but people who play faster titles may prefer a snappier feel.

The trackpad is fine, with decent width and positioning – it’s not far enough to the left to interfere with the WASD keys. The buttons are fast enough to handle casual gaming and mainstream use, but they’re too soft. Even an affordable gaming mouse  will be better for more serious gaming, of course.

Happily, the keyboard and trackpad are both better than the G5 15 Gaming. The IdeaPad Gaming 3i has a better keyboard but a poorer trackpad.

The display is a Full HD IPS panel with a 144Hz refresh rate. Mainstream games will look smooth and fast on this display, and you’ll easily be able to use this display to handle single-player titles and mainstream esports games.

The screen’s brightness level of 278 nits is fine for indoor use but not bright enough for outdoors, and a contrast ratio of 1,390:1 is good – easily high enough to provide solid punch and depth.

Colour levels are underwhelming, however. The Delta E of 5.19 is poor, the colour temperature of 7,280K is too cool, and the panel only displayed 54.5% of the sRGB colour gamut, which is low. The result is underwhelming and means that this display can’t produce the full range of shades that games require.

This display is acceptable for mainstream gaming, media and web-browsing, but no games will look their best here. The Dell G5 15 Gaming has a far better screen.

The speakers are punchy, with plenty of volume and with reasonable mid-range clarity. There’s even a little bit of bass. The top-end is tinny, though and the audio does get muddy when too much is going on. A gaming headset will be better, but this audio is serviceable for mainstream gaming, music and media.

The Asus is underpinned by an Nvidia GeForce GTX 1660 Ti, which has 1,536 stream processors, 6GB of memory and the full-power boost speed of 1,590MHz. This GPU sits beneath the pricier Dell, which has an RTX 2060 – but it’s a step above the Lenovo, which had a weaker GTX 1650.

The AMD Ryzen 7 4800H is an eight-core chip that supports sixteen concurrent threads and has decent speeds of 2.9GHz and 4.2GHz. It’s joined by a 512GB SSD, and networking is handled by dual-band 802.11ac wireless and Gigabit Ethernet. It’s a shame that Wi-Fi 6 isn’t included.

The biggest disappointment comes in the memory department – the UK version of the Asus includes 8GB of DDR4 in a single-channel configuration. Thankfully, the US model has 16GB of memory.

The single-channel memory hinders other components. In Geekbench 5 the Asus scored 6,297, which is surprisingly slower than the Core i7-10750H in the Dell. It lagged in PC Mark 10 too.

I slotted a second memory stick into the A15, bringing the laptop’s total allocation to 16GB of 2,666MHz DDR4, and its Geekbench score rose to 7,960. That’s what I’d expect, because the AMD chip should be significantly quicker than the Dell’s Intel CPU.

The memory had an impact on gaming, too. With 8GB, the A15 played Far Cry New Dawn and Wolfenstein at Ultra settings at 59fps and 82fps. Those are solid results but switching to dual-channel memory improved those figures to 68fps and 86fps.

The single-channel memory doesn’t totally hinder the A15: this laptop will still handle day-to-day web browsing, Office applications and photo-editing and will still play top single-player titles at a smooth 60fps and esports games at the speeds required for the 144Hz screen.

Switching to dual-channel, though, makes a significant difference, especially if you want to make the most out of the AMD chip for content-creation.

The SSD delivers middling read and write speeds of 1,989MB/s and 974MB/s. They’re fast enough to keep the machine snappy, but better SSDs can deliver twice the speed.

There are no big thermal concerns – internal temperatures are fine and the exterior remains cool. Gaming noise levels are good: there is fan output, of course, but it’s better than most rivals and speakers or a headset will easily mask it.

Stressing the CPU adds a little more noise, but the A15 remains decent. Overall, it’s better than the Dell and just as good as the Lenovo.

Battery life is unsurprising. It lasted six hours and forty-two minutes during a video playback test but just one hour and seven minutes during gaming. The Dell and Lenovo machines are both a little better.

The A15 we’ve reviewed sits in the middle of the range, and plenty of alternative options are available.

The Asus TUF A15 is available direct for the £899 model and then a range or retailers including Amazon, AO, Currys PC World, Overclockers, John Lewis and Laptops Direct.

The Asus TUF A15 has ups and downs.

Positively, its graphics chip can handle single-player games and eSports titles at good framerates, and it’s got an excellent AMD CPU. Its blue chassis will appeal to plenty of gamers, the keyboard and trackpad are reasonable at this price, and it’s got decent speakers. It’s cheaper than its big rival from Dell.

Negatively, though, the A15 has a poor screen, mediocre connectivity, battery life that can’t match rivals – and the UK machine’s single-channel memory has a big impact on performance.

If you’re buying in the US, then this machine is more compelling – its $999 price undercuts Dell, it’s got 16GB of memory and its flaws are not fatal for mainstream gaming and daily use. If you do want to get a better screen and improved connectivity, you’ll have to spend more.

UK buyers will need to factor better memory into the budget, and I’d only recommend this if you’re comfortable fitting it yourself – because the A15’s pricier UK configurations bring the Dell G5 15 Gaming into view, and that laptop is a better overall package.

Ultimately, the Asus TUF Gaming A15 has noticeable flaws – but it’s got a good price, too, and with decent performance and ergonomics. If you can cope with its flaws and address that potential memory issue, it’s a reasonable option.