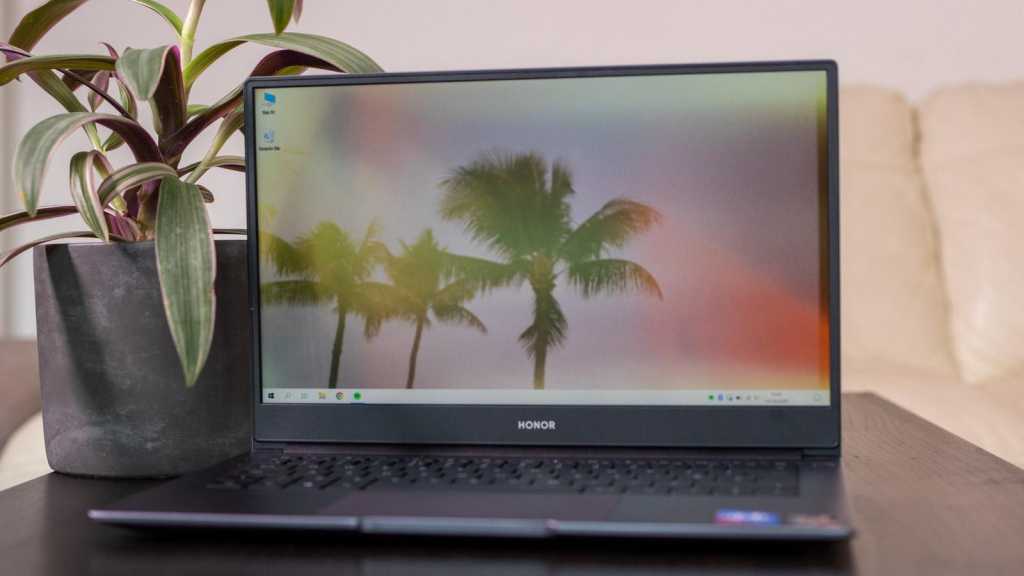 Honor has updated its MagicBook 14 and 15 – only released in the UK a scant six or so months ago – with faster Ryzen 4000-series processors for a welcome spec boost. Not much else has changed, but given the quality of the original MagicBook, that’s really no bad thing.

The big question is really whether the late 2020 MagicBook 14 is worth the price hike that comes with the faster processor, or whether that tips it over the edge and away from being our top mid-range laptop recommendation.

The chassis of the MagicBook 14 remains unchanged from the previous model. What you’re essentially getting is a laptop that’s undeniably a mid-ranger, but is about as slick, polished, and portable as you’re going to get without jumping up to a flagship notebook.

Weighing 1.38kg it’s also fairly portable, especially for a 14in laptop. Sure, it’s not in that sub-1kg space where a laptop begins to feel weightless, but it’s comfortably light enough that you won’t do your back in lugging it around all day. Combined with the aluminium build, that bit of weight it does have also helps it feel reassuringly solid and sturdy.

In the UK the only colour available is Space Grey, which comes with my favourite MagicBook touch: a barely noticeable blue chamfered edge around the lid. It’s just enough to catch the light every now and then for a striking effect, but not so in-your-face that it ever seems garish or flashy.

In case the name doesn’t give it away, the MagicBook 14 has a 14in panel – though there’s also a larger 15in model for the same price, so you can really just pick which size you prefer.

The panel is IPS LCD, with an HD resolution of 1920×1080. That’s honestly nothing special, but at this price it would be unfair to expect OLED or a 4K resolution – though I wouldn’t mind the option for a touchscreen, sadly not available here.

So this isn’t a world-beating display, but it’s crisp and colourful enough for day-to-day use, light work, and watching Netflix. With 63% sRGB coverage and 47% AdobeRGB & DCI-P3 (tested using a SpyderX Elite sensor) this won’t do for serious creative work, but then it’s really not intended to.

Peak brightness is also limited – I only hit 220 nits in my testing – but since the finish is matt rather than glossy, this isn’t really an issue, and you shouldn’t have to worry about glare except in extremely bright direct light. Throw in strong viewing angles and slim bezels (admittedly with a plastic border, rather than the metal of the rest of the build) and the display is a very solid package all round.

This is really a tale of two parts. The MagicBook 14’s keyboard is pretty much a slam-dunk. It has short travel, but it’s full-size, backlit, and both quick & comfortable to type on. There’s really not a huge amount between this and the best laptop keyboards around, and I’d be shocked if you found a better keyboard anywhere near this price.

As for the trackpad…it’s not bad, per se. But it’s definitely a weak spot. Made from plastic, rather than the more premium glass, it’s got the sticky, frictional feel of most cheap plastic touchpads. It’s a good size though, and works perfectly well. You won’t hate it, but it’s one of the few cues that gives away that the MagicBook 14 is still a bit of a budget buy.

Beyond the keyboard and trackpad, you’ll find a fingerprint sensor embedded into the power button, just offset from the keys. This is fairly fast and reliable, though you’ll probably have to re-scan your fingerprint every now and then.

Still, that’s likely to be your preferred biometric option, as while there is a webcam it’s not set up to be convenient for Windows Hello login. Like on all Huawei and Honor laptops, the 720p webcam is found hidden within a fake key in the Function row. This is great for security and privacy – it’s physically blocked from view – but the obvious downside is the least flattering viewing angle known to man.

Here’s where Honor has given the new MagicBook 14 upgrades – some obvious, and some less so.

The big change is the jump from a Ryzen 5 3500U to the Ryzen 5 4500U. That might not sound like a gamechanger, but there was a significant year-over-year performance jump in AMD’s silicon, and it bears out in the benchmarks – this updated model sees a roughly 50% performance boost in the CPU-focused Geekbench 5 and PCMark 10 benchmarks, with more modest gains in the GPU-intensive 3DMark test.

That’s mostly down to the CPU gain, though Honor has also opted for slightly faster 2666MHz DDR4 RAM (up from 2400MHz last time round), though it’s still capped at 8GB. Storage has been given a bump to, jumping up to 512GB from 256GB before.

The MagicBook 14 always punched above its weight when it came to performance-per-pound, and the jump to the 4000-series has only made that more true. It’s now comfortably able to keep pace with Intel laptops that cost twice as much, making this an easy recommendation for anyone who wants a laptop able to keep pace with modern multi-tasking and productivity.

Speaking of, a word of reassurance: the MagicBook 14 ships with Windows 10 Home, and it runs exactly how you expect it to.

You may have heard that Honor phones don’t support Google services, as they’re impacted by the Huawei trade ban, but the same doesn’t hold for their laptops, which have full Windows support. Including access to everything Google.

There’s one additional perk to an Honor laptop: Magiclink. This tech lets you tap a compatible Honor or Huawei phone to the Magiclink tag next to the touchpad, and then seamlessly connect the phone to your laptop.

Once paired you can send files back and forth, directly work on phone files from the PC, take audio or video calls over the laptop, and even bring the phone display up as a movable window on the computer so that you can directly use your phone from the PC. It’s a very neat software trick – but of course only helpful if you also own one of the company’s phones.

Power management is another clear strength for Honor. The new MagicBook 14 lasted over 13 hours of continuous video playback in my testing, which in practical terms meant it was also perfectly capable of lasting a full work day of Slack, video calls, light photo editing, and maintaining a million Chrome tabs at once.

Charging is just as impressive. The included 65W USB-C charger (which is compact enough to carry around and will also charge most phones, conveniently) topped the MagicBook 14 up by 44% in just half an hour, making it among the fastest charging laptops we’ve ever tested.

The MagicBook 14 is available now in the UK, with the updated 4500U model costing £669 direct from Honor, with a free gift – a mouse, backpack, or headphones – thrown in.

Take care though – Honor sells the older 3500U processor model on the same page without making it clear which is which. If you want the faster chipset, make sure you pick the 8GB + 512GB option – the version with lower storage also has the slower processor, though if your needs aren’t too demanding this may be worth the saving regardless, as it’s much cheaper at £549.

Similarly, it’s the 3500U model that’s currently listed on Amazon and some other retailers, so take care and check the specs before you make your purchase.

If you want to compare the MagicBook 14 to other options, check out our full ranking of the best laptops we’ve reviewed to see what else is out there.

Lighter users will be just as happy with the cheaper 3500U model, but the extra power here will more than justify the purchase to power users, or to anyone looking to guarantee strong performance for years to come.