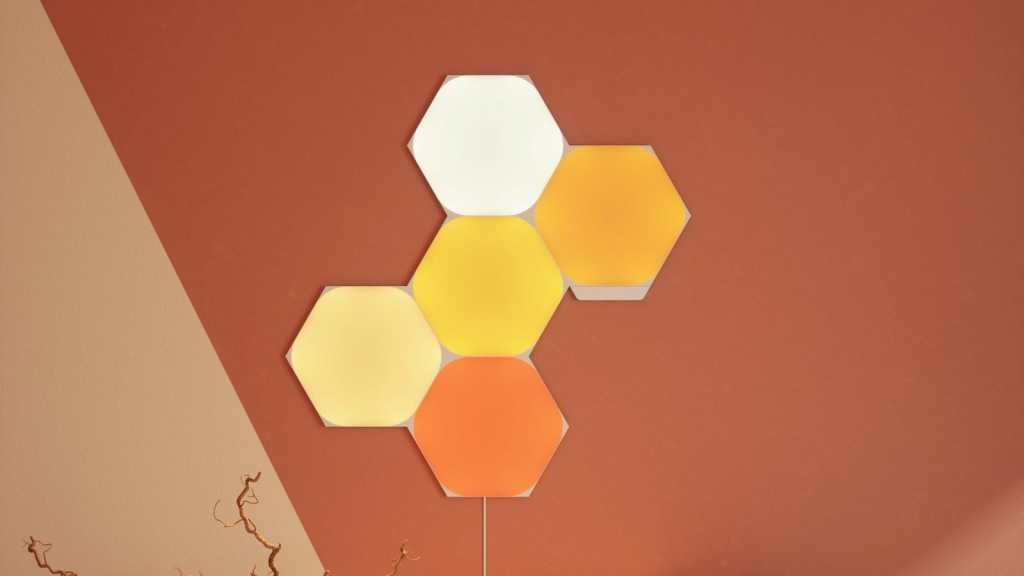 Nanoleaf is still expensive, making it a luxury tech purchase but if you can afford one then the Shapes system is far more dynamic and even more so when you combine different panels. It’s very smart and good looking, even if the light doesn’t completely fill the panel.

After finding success with its smart light system, Nanoleaf has released more variety for those not wanting squares. Shapes, as you might imagine, makes things more dynamic. There are more shapes available now, but I’ve tested the Hexagons kit here.

Just like the original Nanoleaf Canvas, the Hexagons connect together with small link pieces. This modular system means you can create many different layouts and you can add more later if you like, although it might be somewhat awkward.

You’ll want to plan out your design before you stick each panel to the wall (or they can be screwed to the ceiling if you want). If you’re unsure how to set them out, the app has an AR mode to help you out or you could lay it out on the floor.

It’s also a good idea to make sure that you’re placing the tiles within distance of a wall socket. Luckily, the 2.5m power cable gives a decent amount of length so you don’t need to be really close to an outlet. 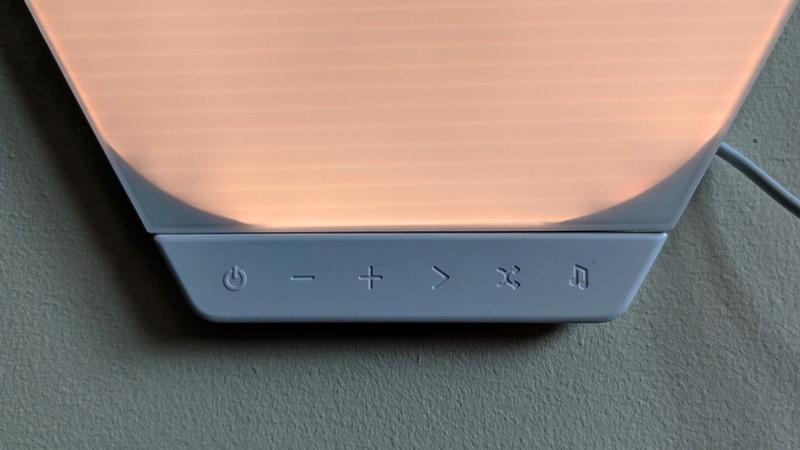 The Hexagons are fairly big at 9in across (point to point) so it’s worth measuring where you plan to put them to see how many you need.

Unlike the Canvas, the Shapes kit comes with a separate control unit rather than one panel with integrated buttons. You can snap this onto any side of the Hexagon and use the touch sensitive controls to power the Shapes on/off as well as adjust brightness and change modes.

Since receiving the Hexagon kit, Nanoleaf announced more shapes so you can now buy and combine triangles and mini triangles into one arrangement. Note that the Nanoleaf is not waterproof so isn’t suitable for outdoor use, or in places of high humidity – not that you’d plan to put them in the bathroom.

With more sides than a square, there’s a lot more variation with the Hexagon kit and that’s before you’ve added in the triangles. 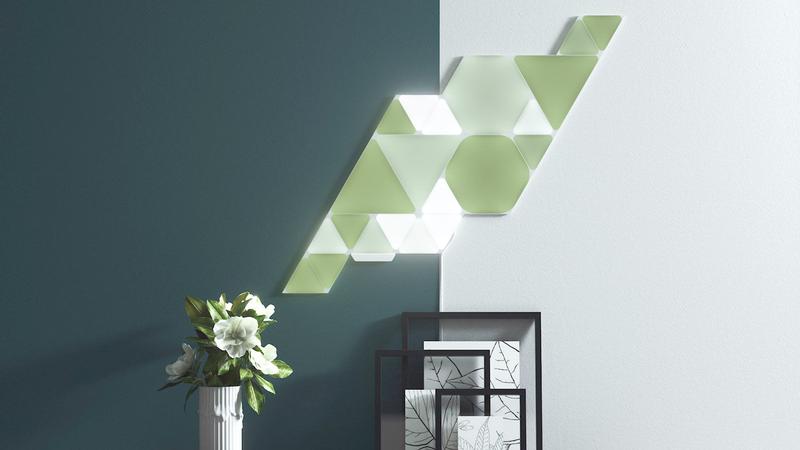 I found it pretty easy to get the whole thing up and running, although I’d prefer more information in the physical paper manual. Following the app is easy for setup but there was a distinct lack of a guide to run through what the Nanoleaf system can do. Links to the website are not really want I want in this situation.

Luckily, I can explain what the Nanoleaf system is capable of here and as you may have gathered, there’s the option to use the physical control panel or the app.

Of course, you can do *a lot* more with the app and I was pleased to find a desktop version as well as mobile – available for Windows and Mac. It seems common for Nanoleaf to be set up in an office near the monitor. 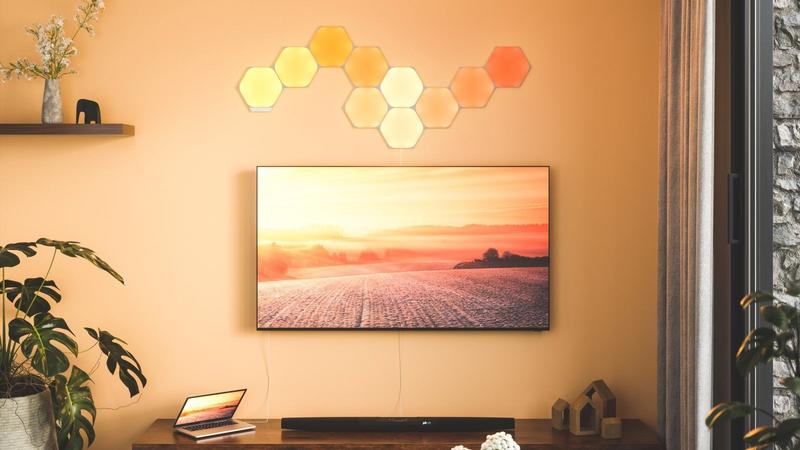 If you do, then you can use Screen Mirror to get a similar sort of effect to Philips Ambilight. There are different modes to choose from here but you will have to use the desktop app to access this feature as it’s not part of the mobile app.

The reliance on the desktop app means you can’t use it for your TV unless you have a PC or laptop plugged into it.

You can adjust brightness and that’s a good thing because when you have a lot of tiles, even five, they can go very bright (100 lumens per panel). Nanoleaf Shapes can support over 16 million colours although, it has to be said, it does a far better job at lighter colours than dark.

In terms of longevity, the system can last for 25,000 hours so even if you used the Nanoleaf for a hefty five hours a day, it would last for nearly 14 years. Use it for two hours a day and it jumps to over 34 years.

The lights look great but do note that the light doesn’t fill the entire hexagon. Instead, it has rounded corners and looks better from a distance, but doesn’t have pointed corners. 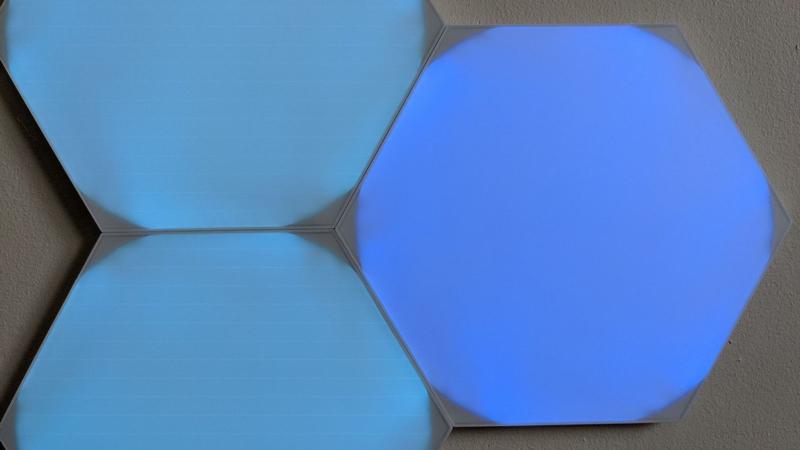 In general, I’ve used the pre-made scenes available via the app which either dynamically cycle through colours or react to music with Music Sync. You will need the Nanoleaf close enough for the lights to react without having to turn the music up very loud.

Nanoleaf isn’t just for show as the panels each have touch sensors meaning you can do things like play games. It’s not obvious at first but you’ll find them in the Discover tab of the app under Interactive. There are games like Whack A Mole, PacMan and Simon which, if I had kids, I imagine they would love. As you might imagine, games work better if you have a larger number of panels.

There’s also wide support for smart systems including Amazon Alexa, Google Assistant, Apple HomeKit and Samsung SmartThings. This means you can control the Nanoleaf with your voice via things like smart speakers with the ability to switch them on and off, adjust brightness and change colours.

You can buy them direct from the Nanoleaf store including accessories and extras, or kits are available from Amazon.

Check out our best smart lights charts to see what other controllable lighting you can get. 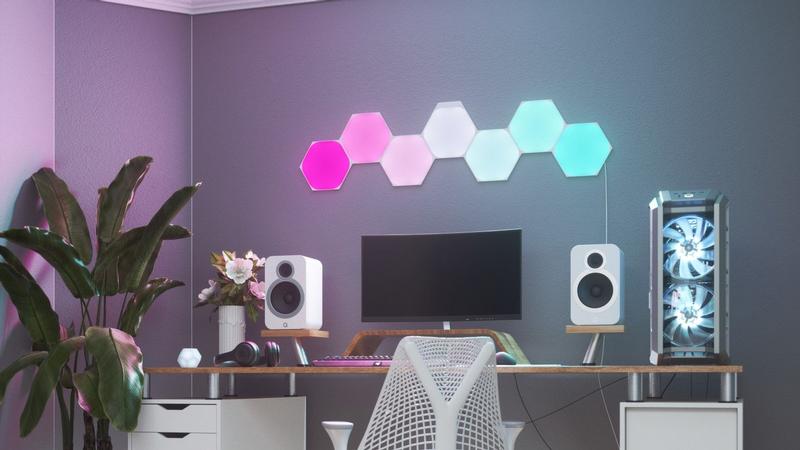 Unless you really like squares, the Nanoleaf Shapes system makes a lot more sense than Canvas. The layouts you can create are endless, especially when you combine hexagons with the two sizes of triangles.

In order to get creative, you need to be pretty flush with cash as only five hexagons will set you back over £100. Add in more panels and other shapes and you could easily spend hundreds.

Putting price aside, the system is easy to set up and looks great. It can then do a lot of different things including react to music and even play games – it’s just a little tricky to get to grips with some features.