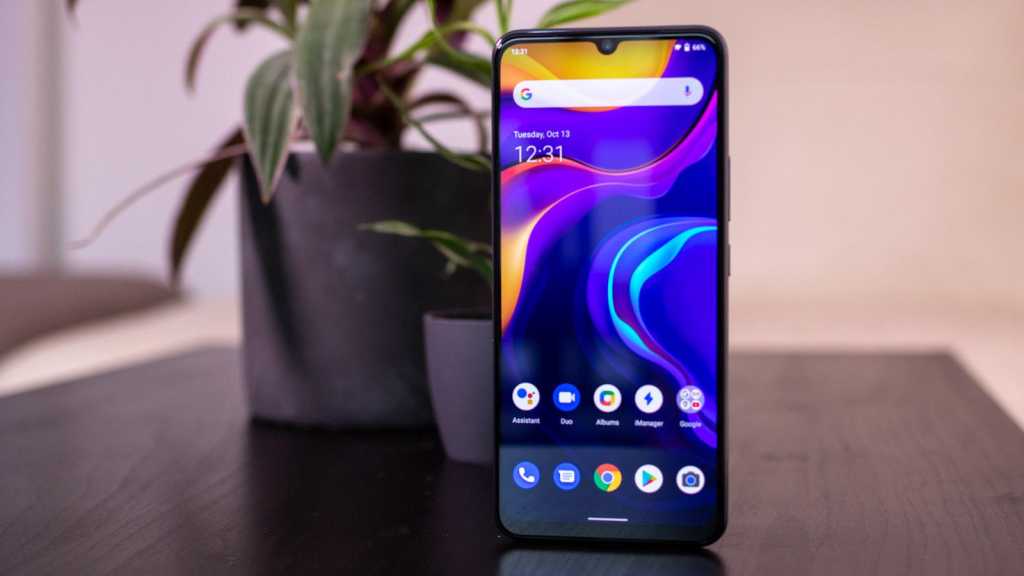 The V20 isn’t a perfect phone, but it knows its strengths. Beautiful hardware design and a thin, light hand feel combine with prodigious selfie camera capabilities – and all at a budget price, no less – to make it clear that this is a phone for the TikTok generation.

Vivo has now officially arrived in the UK, with the X51 and a few cheaper Y-series phones going on sale here at the end of October. What’s notably missing is the V20 series – but on the strength of testing out an imported model, that’s definitely the British market’s loss.

Cheaper than the premium X and Nex phones, the V-series is Vivo’s mid-range line, and the V20 is the latest – accompanied in India and other Asian markets by the V20 SE/Lite and the V20 Pro.

A giant 44Mp selfie camera is the headline spec, making this one of the best selfie phones in the world, but it’s the astonishingly slim, high-end design that’s really made me fall for the V20. Throw in an AMOLED display, Android 11 support, and 4K selfie video recording, and it’s hard to see why Vivo hasn’t fast-tracked the V20 for a western release.

The V20 is honestly one of the best-designed phones I’ve used all year, and that’s counting some of the top flagships and foldables.

The first thing you notice is that it’s just 7.4mm thin, which is thin. It’s light too, at 171g, which makes the V20 feel astonishingly comfortable to hold and use, even with a sizeable 6.44in display.

It helps that the matt glass finish is one of the best you’ll find. It’s smooth, but still somehow grippy rather than slippy. Not only will this phone resist the temptation to slide off your desk, it always feels like you’ve got a solid grip on it.

Speaking of the glass rear, it comes in three finishes with increasingly silly names: Midnight Jazz (pictured), Moonlight Sonata (…white), and Sunset Melody (a pink-to-blue gradient). I’m actually a fan of the sort-of-black finish of my review phone, which is muted enough to look professional if necessary, but still catches the light in an attractive gradient to white.

The display is flat, rather than curved, and admittedly has some generous bezels, along with a teardrop selfie camera setup rather than a punch-hole. That means that from the front the phone slightly gives away that it’s not a flagship, but I doubt most people would really notice, or care.

It helps that, while it’s only 60Hz, the AMOLED screen is great quality, as bright and vibrant as almost any you’ll find. I miss the high refresh rate of 90Hz and 120Hz displays, but around this price you’re mostly having to choose between 60Hz AMOLED or 90Hz LCD – and I’d take the AMOLED every time.

Despite the ultra-slim build Vivo has somehow still squeezed a headphone jack onto the phone’s bottom edge, alongside a USB-C port for charging, and a mono speaker setup.

Taken as a whole, the V20 looks and feels phenomenal, comfortably competing with phones twice its price and more from a design perspective.

The V20 has another secret weapon that most flagships still don’t: Android 11.

Technically speaking, it was actually the first phone in the world to ship with the latest Android OS running out of the box – yes, even ahead of the Pixel 5 – and is still one of very few phones in the world to run the software.

Still, there are caveats. Vivo hasn’t integrated every popular Android 11 feature, with no sign of the media player embedded in the control centre – though it does include my personal favourite, a selection of Google Home smart home shortcuts in the power button menu, along with the conversation notifications tab, new temporary app permissions, and quick screen recording.

On top of Android is Vivo’s Funtouch OS skin. I’ll admit I’ve never been a huge fan of it, but the upgrade to Android 11 together with the European launch seem to have prompted the company to rein itself in. There’s no bloatware to be found, the settings menu has been simplified, and on the whole this feels much, much closer to the stock Android experience.

That means it’s clean, simple, and fast – three things I never thought I’d say about the software experience on a Vivo phone.

The V20’s camera setup is an oddity, because the star is arguably the selfie shooter.

Vivo has managed to fit a 44Mp camera onto the front of the phone – one of the highest megapixel counts we’ve ever seen for a front-facing camera. That means you can get super crisp, detailed selfies out of this phone – but unfortunately there are some big caveats to that.

Most cameras with high megapixel lenses use pixel-binning to improve results – combining information from nearby pixels to generate lower size images that are nonetheless packed with detail and light information. For whatever reason, the V20’s selfie lens doesn’t, so it’s actually missing out on the main benefit that these high detail lenses tend to bring.

It’s also only aperture f/2.0 – good for a selfie camera admittedly, but slow compared to the main rear lens – and the constraints of the teardrop notch mean it’s not got an especially large sensor.

What does all that mean in practice? Shots of you will be crisp, detailed and ready for Instagram – but the camera simply doesn’t have the dynamic range to do justice to the sky and other backgrounds, or handle lowlight with aplomb. The results aren’t bad, but don’t expect the V20 to excel at showing off whatever’s behind you just because it’s 44Mp – it’s focus is squarely on your face.

What about the rear lenses? The main shooter is 64Mp, f/1.9, and it’s a fairly strong performer, with a balanced – if slightly flat – colour profile. Dynamic range is decent if not spectacular, and while lowlight performance out of the main camera mode is fairly weak, it makes up for it with a night mode that nails the challenging task of extracting detail while preserving the colour palette.

The other lenses are a 2Mp depth sensor and a disappointing 8Mp ultrawide, which has a noticeable softness when compared to the main lens, which only gets worse in anything other than bright daylight. It’ll serve for the odd holiday snap of a big vista (remember holidays?) but otherwise you’ll want to avoid it.

As for video, you can shoot at up to 4K@30fps – from both sides of the phone. This is the other perk of that 44Mp selfie shooter, as most phones – especially at anywhere near this price – cap out at HD video on the front-facing camera.

One final note: for all of my praise of the V20’s software improvements, the camera app is a curious backwards step, with oddities all over the place. You can’t zoom out to activate the ultrawide lens, but must instead tap the ‘Lens’ button, which also lets you turn on macro (which is simply the same ultrawide lens) or the bokeh mode.

Of course, you can also get bokeh by going into the dedicated Portrait mode – but only for the rear-facing camera. Portrait mode isn’t supported for selfies – but if you go into the lens selector then bokeh is supported. Confused? Me too.

The V20 is powered by the Qualcomm Snapdragon 720G – the same chip you’ll find in the budget-friendly Poco X3.

That may make the V20 seem under-powered, but arguably it’s just that the X3 is over-specced for its price. More importantly though, the 720G delivers all the power you’re likely to need unless you’re committed to high-end, competitive mobile gaming where hitting high framerates is going to matter.

Paired with 8GB of RAM, performance is middling going by benchmarks, but again that only tells half the story. In day-to-day use it’s perfectly fast, with no noticeable lag, stuttering, or other performance problems during my time with the phone.

As for storage, you get either 128GB or 256GB built-in, which is expandable via microSD. Pleasingly this has its own slot, so you can have two SIM cards in the phone and a microSD card at the same time – a rarity.

There’s no 5G support, but we still don’t recommend many people buy phones specifically for 5G support anyway, so unless you’re in one of the few areas that already has decent coverage, I wouldn’t let that put you off.

A 4000mAh battery makes the V20 a two-day phone for the most part, though heavy users might struggle to hit the full 48 hours.

Either way, the phone will easily last a day and then some, so it’s fine for charging overnight if that’s your preference.

There’s no wireless charging, but 33W wired charging topped the phone up by 72% in half an hour in my tests. There are phones that charge faster, but for most this is plenty – it’s enough to mean you can plug it in while you hop in the shower or make lunch and get most of a day’s usage back out of it – so you also shouldn’t ever feel the need to charge overnight if that isn’t your preference.

As mentioned above, the Vivo V20 isn’t directly available in the UK or Europe.

It has however launched in India, where it starts from Rs 24,990 – which currently converts to around £260/$340. You can order it from Flipkart if you’re tempted and are happy to import it – just bear in mind that you may have to pay additional customs fees.

At that sort of price it’s up against a strong contingent of rival budget phones and mid-range phones.

The OnePlus Nord is perhaps the strongest competitor – it beats the V20 on display and core specs, but the Vivo phone’s superior camera performance may well swing it for many.

It’s a similar story for most rivals at this price – the V20’s camera, while not perfect, is one of the better ones you can get below £500/$500. The Pixel 4a is the rare exception, with better rear photography than the Vivo – though the 44Mp selfies and 4K front-facing video will still swing some to the V20.

The V20 isn’t a perfect phone, but it knows its strengths, and is playing to its target market. Beautiful hardware design and a thin, light hand feel combine with the prodigious selfie camera capabilities to make it clear that this is a phone for the TikTok generation.

You can get better specs elsewhere, but you’ll struggle to find a phone that looks as smart, or delivers to the V20’s specific audience as well, without spending much more.