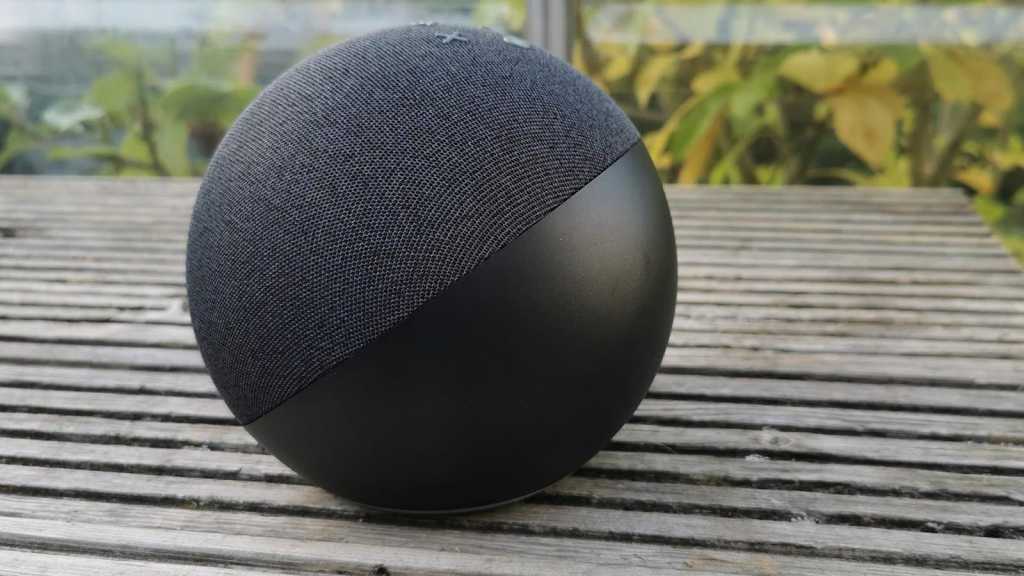 The Echo 4 is better value than ever, but you may not actually benefit from its built-in smart hub.

Amazon has changed the design of the Echo each time it released a new version. But the 2020 edition – the fourth-generation model – sees the biggest departure yet from the upright cylinder that we’ve seen morph over the past four years or so.

The Echo, along with the Dot and separate Dot with clock, are now spherical and move the light ring to the base where it reflects off whatever surface you place it on.

There are other upgrades too: to the internal speakers, the processor and even new sensors and wireless stuff.

On top of that, it has the smart hub (from the Plus) built in, so there’s no Plus model any longer: Amazon merged the two models but still charges the same price it did for the Echo 3.

Let’s talk design first. The bowling-ball looks are certainly fun and almost nothing remains from the Echo 3.

The four buttons are still placed on top and do the same things: volume, mic mute and the ‘selection’ button which can be used to call up Alexa, reset Wi-Fi settings and more.

The fabric doesn’t cover the whole device: there a diagonal split which runs from the front at the bottom to about two-thirds the way up the rear. Though spherical, this is very much a directional device with forward-facing tweeters.

The light ring, as mentioned, is at the base. I’m still not sure how I feel about this after testing the Echo for a few days. Until it was obscured, I didn’t realise quite how much I relied on it when talking to Alexa. 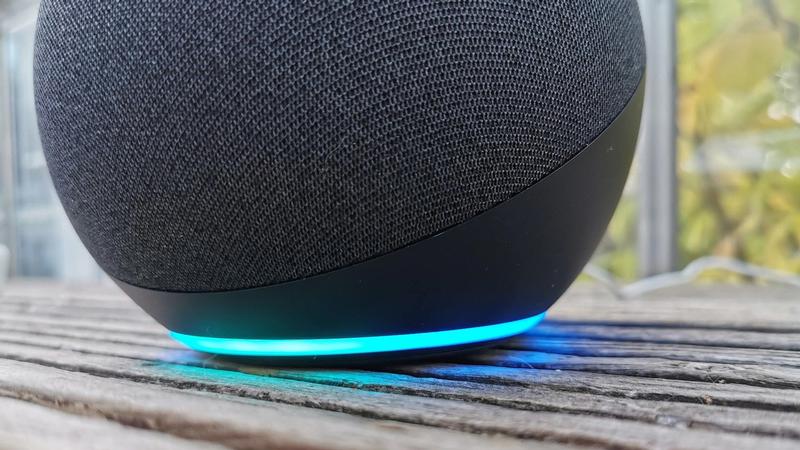 It’s still visible from some angles and distances, but is designed to reflect rather than be seen directly. Where the volume indication used to be shown as a white circle, with half lit to represent 50% volume, it’s now split into two halves and only really by looking at the reflection can you see the indication increasing and decreasing. But you can’t really tell what the volume is set to: only that the light is brighter or dimmer.

It’s a minor gripe, especially given how easy it is to say “Alexa, turn it up” or “Alexa, set the volume to 60 percent”.

At the rear is a cutout in which sits the power connector and the 3.5mm minijack socket which can be configured in the Alexa app to be either a Line-in or Line-out. 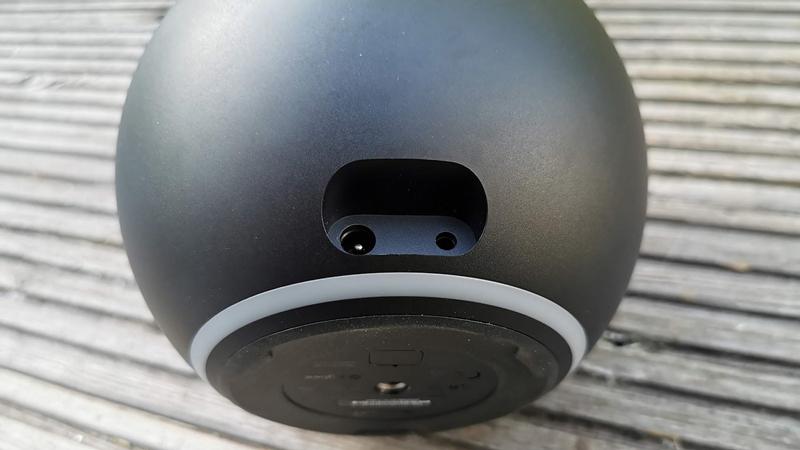 Underneath is something which remains mysterious from previous generations: a screw thread. It looks like, but apparently is not, a standard tripod mount and as far as I know, Amazon hasn’t released any speaker stands for its Echos. 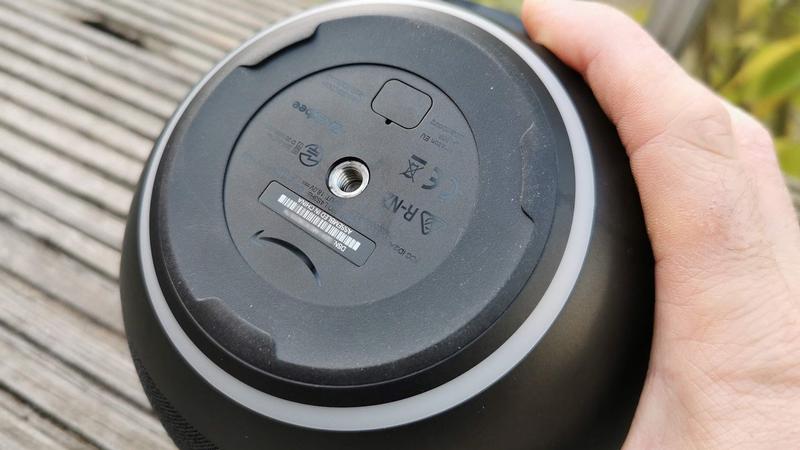 Alexa, of course, is the same as you get on any Alexa-enabled device, and I’m not going to talk about the assistant here. If you want to know about her capabilities read How to use Alexa.

What’s noteworthy in this review is that the Echo 4 has a new processing chip called the AZ1 Neural Edge.

As well as using 20x less power than the chip in previous models it also requires 85% less memory usage and processes speech up to two times faster.

Put simply it means the Echo can respond much faster when you ask Alexa a question because the chip is able to process speech locally rather than sending a recording to Amazon’s servers to process it, and then sending the results back. Amazon isn’t claiming that the new Echo works offline: it doesn’t, but certain requests will be met with a faster reply.

Also, the Echo (and Echo Show 10) have enough memory to handle Amazon’s new all-neural speech models that makes Alexa sound a lot more natural and will also facilitate the new Natural Turn Taking feature which lets you have a more human-like conversation with Alexa without having to say the wake word each time.

In fact, I’m not entirely clear about when the features Amazon announced during the Echo’s launch will be available to UK buyers. They’re coming to the US first and the company says it will expand them to other countries later.

Alexa certainly seemed to respond faster on the Echo 4, but of course I couldn’t experience the more natural-sounding voice or Natural Turn Taking.

Amazon has redesigned the power supply for the fourth-generation and there’s now just an off-white version, meaning the power cable contrasts with the black model in particular, but is a better match for the white version.

One great new addition is a built-in thermometer which means you can ask “Alexa, what’s the temperature in here” and she’ll tell you.

There’s also Zigbee and Bluetooth Low Energy which allows you to connect Philips Hue bulbs and other compatible gadgets without requiring a separate hub. This is only a benefit if you happen to have devices that use Zigbee, of course, and even then, you’re limited on what you can do with Hue lights without the Hue Bridge.

My colleague Michael, based in the US, said it would be better if the Echo also has Z-Wave support, but this isn’t as big a deal in the UK where most smart home gadgets simply use Wi-Fi to talk directly to your router.

Another feature that is much more relevant to US buyers is support for Amazon Sidewalk. This is another radio that Amazon has put into the new Echo (and which is already in Ring cameras) that will reach a lot further than Wi-Fi and help to keep outdoor smart lights, garage door openers and other gadgets that live outside connected to the internet.

It will also help with devices such as Tile (and other) trackers as they’ll be able to get a signal and you’ll be able to find them even if they’re out of normal range. The 900MHz signal extends up to half a mile according to Amazon. But, there’s no word yet about when Sidewalk will come to the UK – the name doesn’t even make sense here where we call them ‘Pavements’, and that’s a terrible name for the feature.

There’s a 3in (8cm) woofer which faces upward and not one but two 0.8in (20mm) tweeters. As mentioned, despite the design, there’s no 360° audio here. The tweeters face forward, which means you get the best sound if you’re sitting with them facing you rather than on either side. 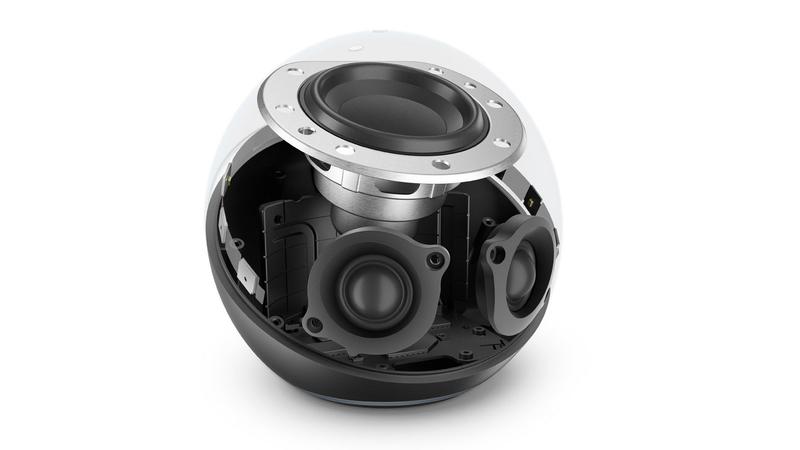 However, that’s not to say quality diminishes noticeably if you’re not sat with your ears level with the speakers directly in front of you. Depending on how you like your music to sound you might even find there’s too much treble.

There’s a good amount of bass – more than the Echo 3, but mids aren’t quite as strong as bass or treble. You can adjust EQ via the Alexa app to boost mids and, overall, the Echo 4 sounds better than the Echo 3, but isn’t a patch on the much larger – and more expensive – Echo Studio. The same goes for Sonos speakers: they sound better but cost more.

Like the Studio the fourth-gen Echo will automatically optimise sound based on your room, but since you can’t turn this feature off it’s not possible to test how much of a difference this makes.

Put simply, music of just about any genre sounds good (but not great) and voices, whether Alexa’s or on the radio or podcasts sound very good.

Surprisingly, Amazon has kept the price the same as before, even though this is now effectively an Echo Plus.

That’s exactly the same price as the Nest Audio, which has clearly been pitched to compete directly with the Echo.

Read our Nest Audio review to see what you get from Google, but as we explain in our Google Home vs Amazon Echo buying guide it doesn’t make sense to invest in both systems. If you already have Echo devices, it’s much more convenient to stick with Amazon’s ecosystem.

It’s worth watching for discounted third-generation Echos as retailers look to sell off old stock, but remember to weigh up the differences between the old and new version.

Also read our roundup of the best smart speakers.

The redesigned Echo is a winner. Thanks to the inclusion of the smart hub – and temperature sensor – you get more for your money as well as slightly better sound quality.

Don’t forget the new AZ1 processor: this makes Alexa respond faster and will bring more benefits as Amazon rolls out Alexa’s more natural-sounding voice. Sidewalk support is currently only interesting in the US, but should it come to the UK and other countries that will be a bonus too.