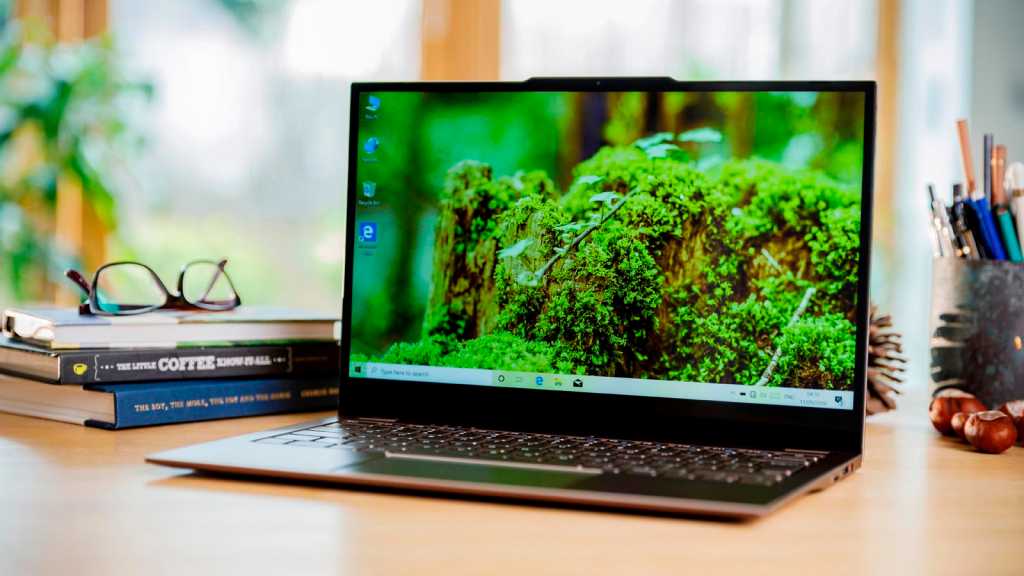 The Jumper EZbook X3 Air doesn’t look like a budget laptop, but the battery life is its downfall.

Not everyone has the luxury of dropping around £1,000 on a laptop these days, and if you’re looking for a budget buy it can be hard to know what’s a good deal. If you want something with a flashy and lightweight design, then Jumper’s EZbook Air X3 may be of interest.

Jumper isn’t as big a household name as other laptop manufacturers, but it is known for its relatively affordable prices. The EZbook Air X3 is one of the latest releases on the market – but is the performance as slick as its appearance? Read on for my full review.

The exterior is made from an aluminium body, and has quite a premium feel. I’m a fan of the colour of this laptop, which Jumper refers to as ‘mocha brown’. It’s a nice metallic shade that still looks professional and refined, without being the bog-standard silver or black. This is the only colour option that the laptop comes in.

As the laptop is metal – unusual for a budget device – Jumper claims that this design helps heat dissipate faster, something I found to be largely true. When multi-tasking, the EZbook X3 Air only got slightly warm underneath, and wasn’t particularly noisy either.

The screen is attached by a hinge that allows it to fold back by 180 degrees, a trend in laptops that’s hard to find use for. This mechanism is a little flimsy – when you lift the laptop up, the screen will sometimes flip back slightly.

At 11.5mm thick and 1.05kg in weight, this laptop is extremely portable. It will slip into a backpack with ease and isn’t at all bulky or heavy when being carried around. This is actually quite unusual in the budget space, so if a slim design is a top factor in your laptop choice, this is a one to consider.

You get an IPS FHD 13.3in display with an 89% screen-to-body ratio thanks to the narrow 6mm bezel. Colours are bright and contrast well, making this a great laptop for streaming Netflix and watching YouTube.

Viewing angles are also quite good, though you do get a bit of screen glare if viewing under direct sunlight. Nonetheless, many budget laptops forgo a nice screen so it’s good to see on the EZbook X3 Air.

The keyboard travel on this laptop doesn’t have a great deal of bounce back, and altogether feels quite cheap. In addition, I had a few issues with the trackpad, which on occasion was slightly glitchy and unresponsive.

You get a decent spread of ports on the EZbook X3 Air. These include two USB-A ports (2.0 and 3.0), one USB-C port (though not for charging), a mini HDMI port, a microSD card slot, an SSD slot, a headphone jack and DC port for charging.

The laptop is fitted with dual speakers on the bottom. Whilst the treble on the sound is quite clear, bass is virtually non-existent which makes music sound very tinny. In addition, when the volume is turned up past 50%, the sound vibrates through the entire keyboard, creating a nasty amount of feedback which gets worse as your turn up the speakers.

For those working from home and jumping on Zoom calls, the Jumper EZbook X3 Air comes fitted with a webcam and a built-in microphone – with the former housed on a jutted-out notch on the top of the display so it doesn’t interrupt that nice large screen.

Of course, like most laptop webcams, at a quality of 1Mp the colours on the video are blown out and blurry, and audio is also extremely distorted. If you’ve got a lot of important calls, I recommend investing in an external plug-in webcam and a microphone and/or headset depending on your budget and space.

This is a budget notebook laptop, so you shouldn’t be expecting anything massively powerful when it comes to performance. The EZbook X3 Air runs on the Intel Celeron N4100 (Gemini Lake) processor, a chip only seen in more affordable notebooks. This is paired with 8GB RAM and 128GB worth of storage. This is the only spec option you can currently get. However, the SSD slot supports up to 1TB of expandable memory should you need more.

The EZbook is designed mainly for productivity, such as using Google Drive and Microsoft 365, and streaming videos and movies in your downtime. If you know you’ll need to be taking on heavy-duty work like video editing or gaming, then it’s worth looking at mid-range and up laptops.

The lack of power within the EZbook X3 Air is evident in our benchmark testing. PCMark 10 wouldn’t run at all, so we can only really compare 3DMark and Geekbench 5. As you can see, the results weren’t exactly off the charts, even compared to other budget devices:

When working on the cloud, this laptop was quite responsive. I could have video playing in the background and numerous tabs open, and the PC still ran quite fast and without any issues. For basic multitasking online, this notebook delivers.

However, download speeds on the Jumper EZbook X3 Air are extremely slow. Downloading 3DMark (6.3GB) on internet speeds of 35 Mbps took around 30 minutes, which just isn’t practical, and the Jumper typically saw speeds 15Mbps lower than my regular laptop side-by-side. It’s a good reminder that sometimes cheaper devices will include performance hits where you least expect them.

One of the biggest downsides of Jumper’s EZbook X3 Air is the battery life. It only managed to scrape a measly 5 hours and 30 minutes in our internal battery testing, and real-world usage proved to be between four and five hours, even when using the power-saving mode. Not even half a day’s use would have me reaching for the charger.

This laptop also uses the more old-school pin charging, but this doesn’t mean it juices any quicker. Turned off, the laptop charged 34% in 30 minutes. Basically, if you plan on using this laptop for an entire day, make sure you have access to a power socket for charging for at least half of your time.

Software-wise, you get Windows 10 as standard, so the OS is extremely easy to navigate and setup.

You can currently purchase the EZbook X3 Air directly from Jumper and from  GearBest. Jumper does sell its range of laptops on Amazon, but this model isn’t yet available to buy in the UK. If you’re in America however, the laptop is available to buy from Amazon US.

Price-wise they typically sell for around £269.99/$369.99. However, some sites do offer coupons and deals regularly, so you may be able to pick it up for less.

Budget laptops are often all about compromises, and the Jumper EZbook X3 Air’s battery life is quite a big one. For around the same price, you can get the Lenevo IdeaPad S340, which has a long battery life and almost as nice a design. However, you do trade out for a lower-quality screen here.

With the fact that this is mainly a productivity device, you could also opt for a Chromebook – if you don’t mind forgoing Windows. One of the best budget ones on the market is the Acer Chromebook 314 – though of course then you’re mostly limited to working in the cloud.

For further options, take a look at our list of the best budget laptops, the best Chromebooks and the best laptops overall if you’d rather opt for something more expensive.

If what you’re after is a stylish laptop that you want to use around the house for light work and productivity tasks, then the Jumper EZBook X3 Air ticks those boxes, whilst keeping at an affordable price point. It also boasts that nice large screen which is great for streaming.

However, it’s not something you should consider if you need a device to use whilst travelling due its poor battery life. In addition, though the display is nice, the speakers don’t quite match up. Consider what your priorities are – and whether the EZBook X3 Air’s positives are enough of a draw to overlook its downfalls.