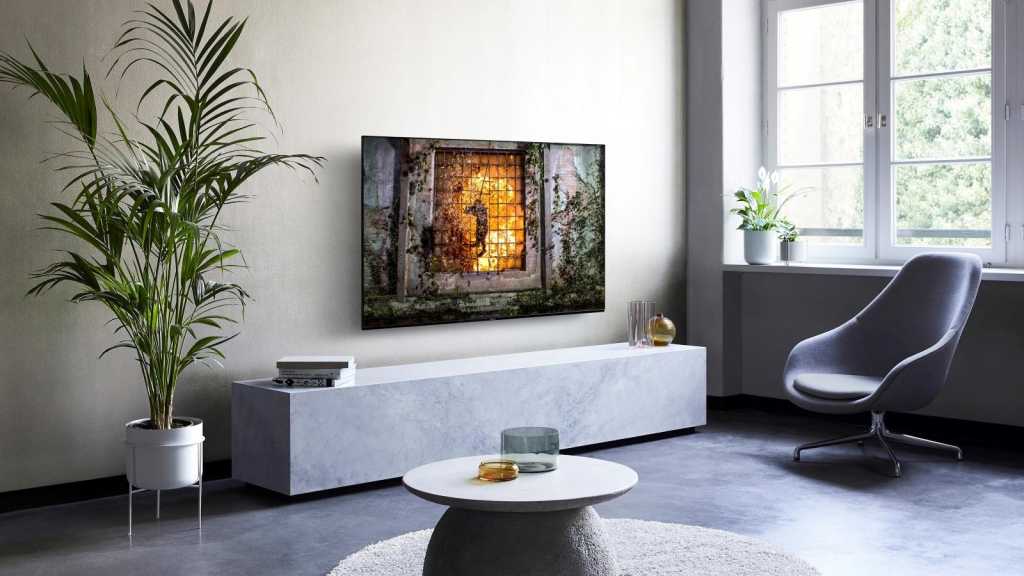 Sublime, cinematic images, with Dolby Vision IQ and Filmmaker Mode, make this premium OLED a telly to savour – but if you’re a gamer, there’s a catch…

Panasonic is aiming this premium 4K performer unapologetically at film fans. Tuned by leading Hollywood colourist Stefan (Star Wars: The Force Awakens, Wonder Woman) Sonnenfeld to be faithfully filmic, and featuring Dolby Vision IQ, the latest auto-optimising iteration of the HDR standard, the HZ1000 is engineered to have home cinema fans drooling and we’ve tested the 65in model.

But with limited gaming chops, is this enough to justify the toppy price?

There’s nothing insubstantial about the HZ1000. It weighs in at 27kg and is beautifully finished. The bezel is fashionably thin and the panel sits virtually flush to its pedestal. It also swivels, which is surprisingly useful if you have an asymmetrical living room. This pivoting isn’t possible on its more expensive stablemates.

Around the back are four HDMIs, one of which supports eARC. All are 4K 60fps compatible, but there’s no 4K/120fps coverage. This will disappoint gamers looking for a high-end display to partner the S5 or Xbox Series X. The only consolation for console users is an Auto Low Latency game Mode (ALLM).

Find out more in our Is my TV PS5 or Xbox Series X/S compatible? guide.

Other connections include an analogue AV input, optical digital audio output, Ethernet and three USBs. A 3.5 mini jack does double duty as a wired headphone or subwoofer output.

The chunky remote control features dedicated buttons for Netflix and Freeview Play, as well as a Filmmaker Mode preset shortcut.

The UI isn’t as brazen as Samsung’s Tizen found on the Q80T or LG’s webOS found on the GX6LA, or screen-hoggingly unsubtle as Android, but that’s its main strength. It’s accessible from a trio of buttons bottom left.

You get a decent selection of streaming apps, including Netflix, Amazon Prime Video and Britbox, while Freeview Play tuner guarantees access to all the main catch-up TV services. It’s also extremely customisable.

The aforementioned shortcuts are labelled Apps, Devices and Live TV. You can customise this selection by ‘pinning’ additional shortcuts for channels, services or inputs. Need fast access to YouTube? Just pin it to the home screen.

The obvious drawback is the lack of Disney+.

The set does offer Universal HDR support though, with HDR10+ and Dolby Vision joining HLG and regular HDR10.

Panasonic isn’t exaggerating when it proclaims this a ‘master’ OLED – its detail, contrast and colour handling are unquestionably masterful.

Regular HD SDR, be it from streaming apps or Blu-ray, as well as native 4K content, look supremely sharp and colour rich.

HDR performance is dramatic. I measured peak HDR brightness at around 870 nits, which means there’s little need for aggressive tone mapping. Not only are blacks deliciously impenetrable, the set also does a great job finding detail in the shadows.

FMM joins a raft of other image presets, including Dynamic, Normal, Cinema, True Cinema, Custom, Professional 1&2 and Sport, so one way or another you’ll find a mode that works for you (we gravitated toward Dolby Vision IQ, Normal and Cinema).

While both higher priced models in Panasonic’s 2020 OLED fleet have fully realised Dolby Atmos sound systems, complete with up-firing height speakers, the HZ1000 is rather more rudimentary. This isn’t a bad thing, as the TV lends itself to systems where more ambitious sound systems are already in place.

With a 2x15W output, it’s fine for casual viewing, although we advise buyers to bitstream Dolby Atmos out over ARC HDMI to external audio kit.

When it comes to gaming, we measured the set’s input lag at 21.7ms (1080p/60fps), which isn’t bad, but it’s not up there with rival OLEDs, or even Panasonic’s own LED screens. As mentioned earlier, it doesn’t support 120fps for next-gen consoles.

You can buy it from John Lewis as well as other retailers including Richer Sounds, Hughes, Peter Tyson, Laptops Direct and Sevenoaks.

This HZ1000 is a little cheaper than the brand’s HZ1500 model, because it lacks a built-in Dolby Atmos speaker system, however it has the edge over the slightly cheaper HZ980, thanks to an upgraded motion processing engine (Smooth Motion Drive Pro trumping regular Smooth Motion Drive).

Check our chart of the  best TVs to see what other options you have.

The Panasonic HZ1000 is a gorgeous OLED performer with a filmic presentation that really brings home the multiplex vibe home.

Its HDR performance, and the provision of Dolby Vision IQ, hits the spot and the brand’s My Home Screen UI is an easy smart platform to use.

Serious gamers though might want to look elsewhere, perhaps at LG’s CX OLEDs or Samsung’s QLED fleet, for a UHD TV that supports higher frame rate 4K video, if only to ensure they don’t suffer FOMO when they add a next-gen games console to their equipment rack.