Apple just made the Watch even better and although not a lot has changed, it’s still the best smartwatch you can buy.

As so often is the case, Apple wasn’t the first company to bring blood oxygen monitoring to a smartwatch. And yet it is one of the highlight features of the Apple Watch 6, at least according to Apple’s marketing department.

That’s primarily because there just aren’t many other new features to differentiate the Series 6 from the Series 5. You can pick a new blue aluminium colour, the always-on screen is brighter than before and the processor is faster.

But, no-one is pretending that you’d upgrade your Series 5 this soon. No, the Series 6’s appeal is to those with a much older Apple Watch, or someone wanting their first.

And by all accounts, this is a seriously impressive device. Its interface is slick, it’s swim-proof, has GPS to track exercise, a loud built-in speaker so you hear Siri’s reponses (or use walkie-talkie mode to chat to a friend), Bluetooth for music without an iPhone, various health monitoring tools and the ability to store your cards for contactless payment. Crucially it can also run additional apps. 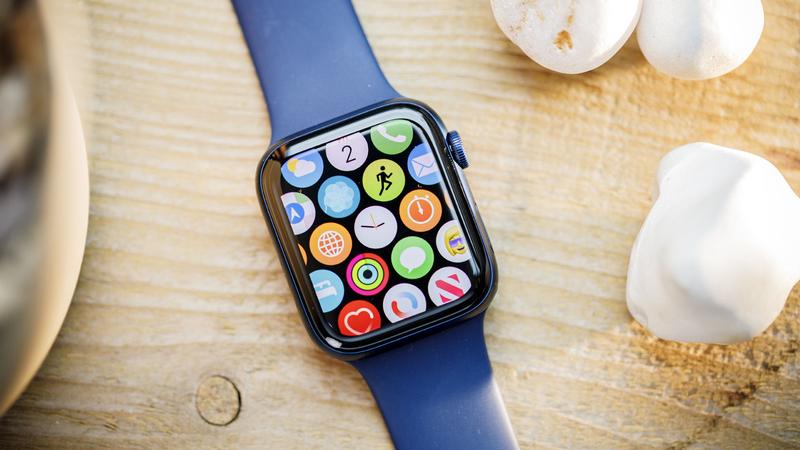 It’s that last hurdle that just about all competitors fall over, and one of the reasons why you’ll appreciate having an Apple Watch on your wrist. From checking when the next bus will arrive to turning on smart lights, you can do so much more on the Watch than on most rivals.

Even notifications are a cut above: you see video previews from your Nest doorbell, can read and reply to messages, either by dictation or scribbling on the screen.

Of course, most of those advantages apply to any recent Apple Watch, so why buy a Series 6? The reasons are straightforward: as with an iPhone, buying the newest model means it will be supported for longer.

You also get to choose the new blue aluminium case so it’s obvious you have that latest model and the Series 6 is the only one to get Sp02 monitoring, an always-on display that’s 2.5x brighter than the Series 5 (handy) and there’s also an always-on altimeter (less handy). 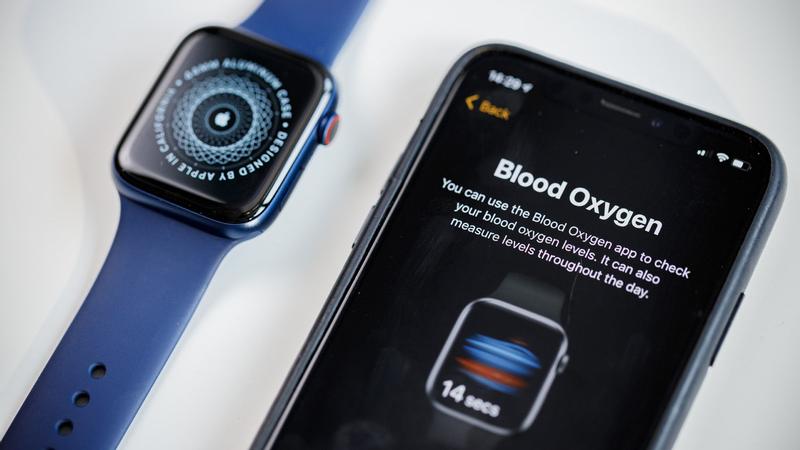 Other than the colour, there is no difference in design to the Apple Watch 5 – or 4. This isn’t a bad thing: more of an observation.

The square screen might not seem ideal for a watch, but it works so much better than a circular screen for just about everything, even if you pick the Infograph watch face with its circular analogue clock. That’s because it uses the corners to display extra information such as the temperature, air quality, battery level, heart rate or whatever you choose. 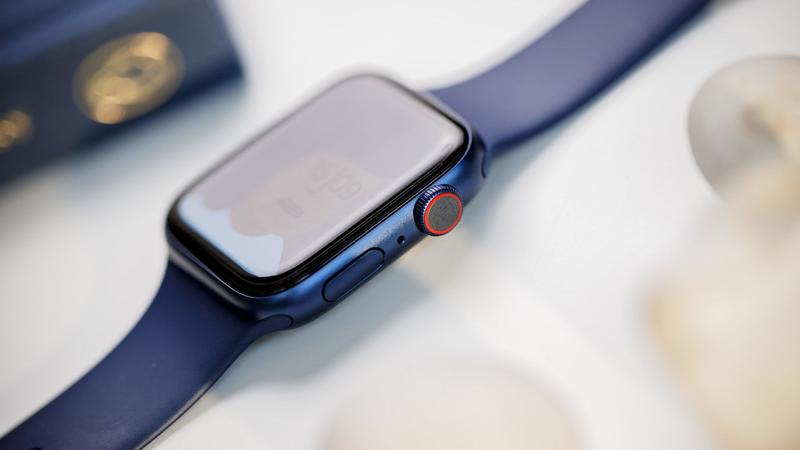 When your wrist is down, the screen dims and – on many faces – the colours invert, probably to save power. This means that you can glance at the time without having to raise your wrist to make the screen turn on. The Series 5 has the same features, but the dimmed mode is now two and a half times brighter, so it’s easier to see outdoors.

As before, you can choose between 40 and 44mm sizes, and there’s a variety of colours and materials, with prices rising from the base 40mm model.

You don’t get LTE as standard: that’s a separate, more expensive version, and it’s the one you’ll need if you’re planning to give it to a child who doesn’t have an iPhone, using the new Family Setup option Apple just added. 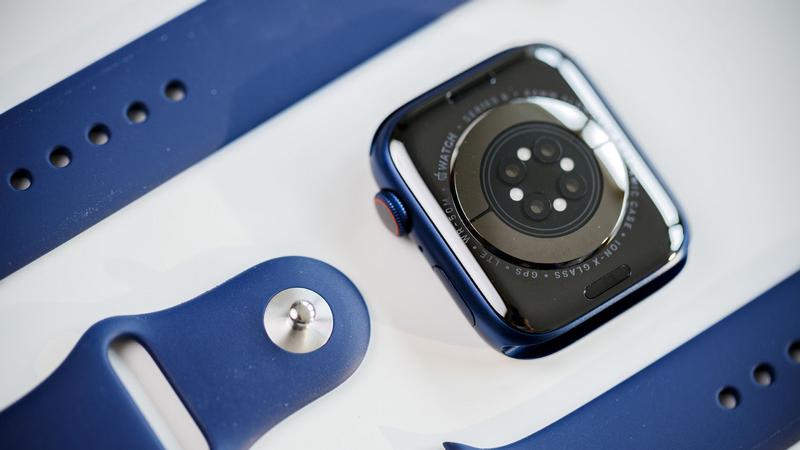 The best experience is naturally when you have an iPhone paired, but the Watch is surprisingly capable on its own.

As mentioned, the standard model has GPS and can store music which you can listen to via Bluetooth headphones (including AirPods of course), so you can go jogging or walking without your phone.

A variety of exercise types are supported, and of course you can use Apple’s new Fitness+ service with your Watch to get tailored workout videos, and see your stats on your iPhone, iPad or even TV screen via an Apple TV.

It’s important to understand that Apple doesn’t sell the Watch as a medical-grade device, but even with that in mind, it offers a host of useful features to alert you of potential problems.

From fall detection and alerts for noise levels that could damage your hearing to more serious tools such as an ECG reading and notifications for an irregular heart rhythm, the Series 6 can certainly watch out for you.

Now, there’s blood oxygen monitoring. Like heart rate, this is sensed via LEDs on the back of the Watch and requires you to keep your wrist still for 15 seconds. 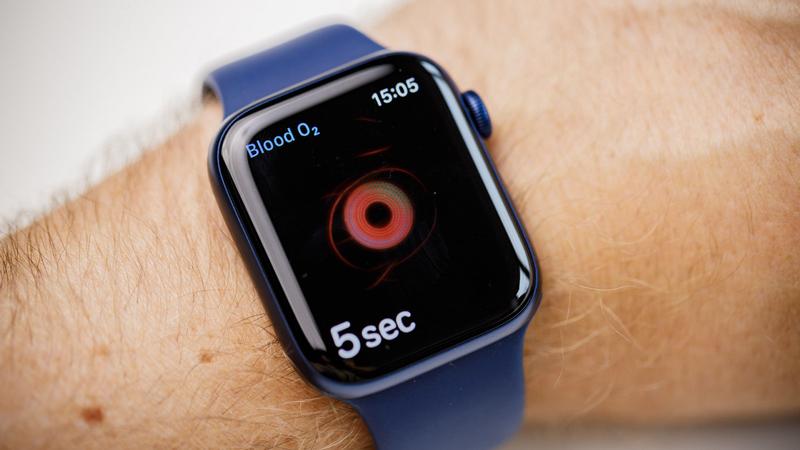 Apple was careful to point out that its sensor is not medial grade, which means it’s basically the same as the one you get on other wearables, including Xiaomi’s Mi Band 5 which costs around £40/$40.

The other problem is that no-one really knows what to do with the information. Apple hasn’t done a wonderful job of explaining this either: it says that blood oxygen levels are a good indicator of overall wellness.

Yet, and I suspect I am not alone in this, I know when I feel well and when I don’t. Yes, there are times when people are symptomless and monitoring can offer an early warning, but beyond the initial novelty, I can’t imagine regularly checking my SpO2 when I feel fine.

Given that results from using the feature aren’t necessarily accurate – at least to medical standards – blood oxygen monitoring alone isn’t a reason to go out and buy a Series 6.

In the early days, the shorter battery life of the Apple Watch meant sleep tracking wasn’t available: your watch would be on its charger by bedtime. Now, with around a day and a half between charges, it’s possible as long as you can reschedule the overnight charging so you don’t end up with no power mid-way through a day. 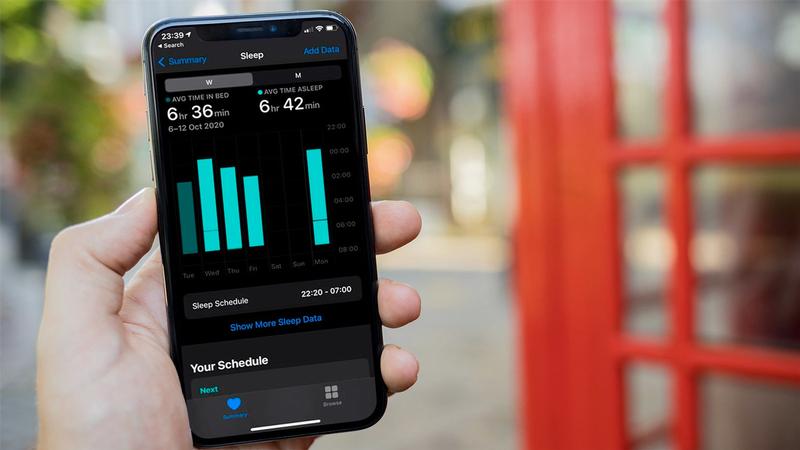 Although sleep tracking is built in to watchOS 7, it was available via third-party apps beforehand. It’s unusual for Apple not to match the competition, or beat them, but as it stands currently, sleep tracking is nothing more than a record of when you went to bed and woke up.

Wearing the Series 6 overnight is comfortable, but the information that the Health app spits out means it isn’t worth changing your charging habit just yet. There’s no breakdown of REM, light and deep sleep: you simply get an average figure for time spent in bed.

And you don’t need to wear a smartwatch all night to get that. It’s eminently possible that Apple will evolve sleep tracking over time as the Series 6 (and indeed all Apple Watches) have the necessary sensors to monitor the stages of sleep and make educated guesses about when you actually go to bed and wake up, as well as when you’re lying awake and not asleep.

But again, this isn’t a reason to buy an Apple Watch Series 6.

With their longer battery life, Fitbits are much more adept at sleep tracking, although you lose Apple’s better app choice when choosing Fitbit over Apple. Read our  Fitbit vs Apple Watch comparison for more details.

There is one final new feature: the U1 Ultra Wideband chip. It’s currently exclusive to the Series 6: the SE doesn’t have one. The iPhone 12 and HomePod mini also have it, so these devices should play nicely with each other, although Apple hasn’t yet explained how the chip will benefit Apple Watch 6 owners. 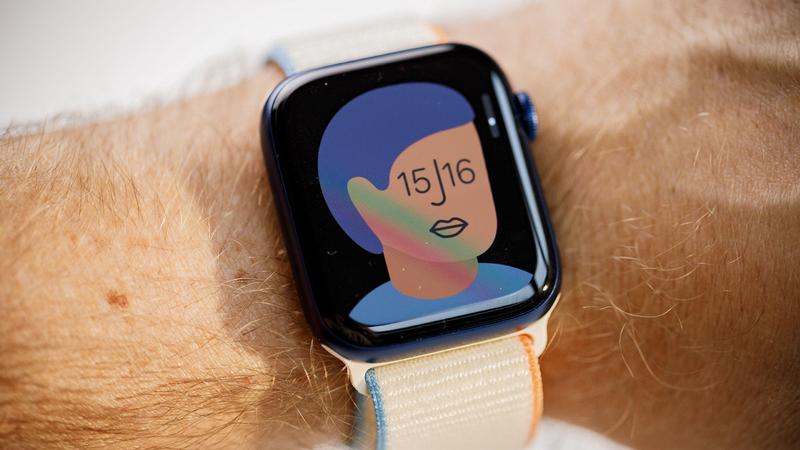 It’s used for spatial awareness, and Apple used the example of haptic, visual and audible feedback on an iPhone 12 when handing off to the HomePod mini.

You can buy an Apple Watch Series 6 from Apple and other retailers, such as John Lewis in the UK. It went on sale on 18 September 2020.

It’s available in blue aluminium, silver, space grey, and gold. Plus, there’s a Product RED version with a red band.

If you’re based in the UK, check out our Apple Watch Series 6 deals roundup for some great offers. You may also want to consider the more affordable Apple Watch SE, or another entry in our  best smartwatch chart.

While the inclusion of blood oxygen monitoring is nice, it isn’t a dealmaker. Neither is the always-on altimeter, nor the new blue colour.

Ultimately, the Series 6 isn’t a gamechanger. But it doesn’t need to be. It’s an evolution of the best smartwatch out there and is a great buy if you currently own an Apple Watch Series 1, 2 or 3. You’ll notice it’s much more responsive, and the always-on screen makes a huge difference.

With a bit of luck Apple will flesh out the sleep tracking capabilities and that U1 chip might well come in useful, but even with these unknowns, you won’t be disappointed if you buy an Apple Watch 6.