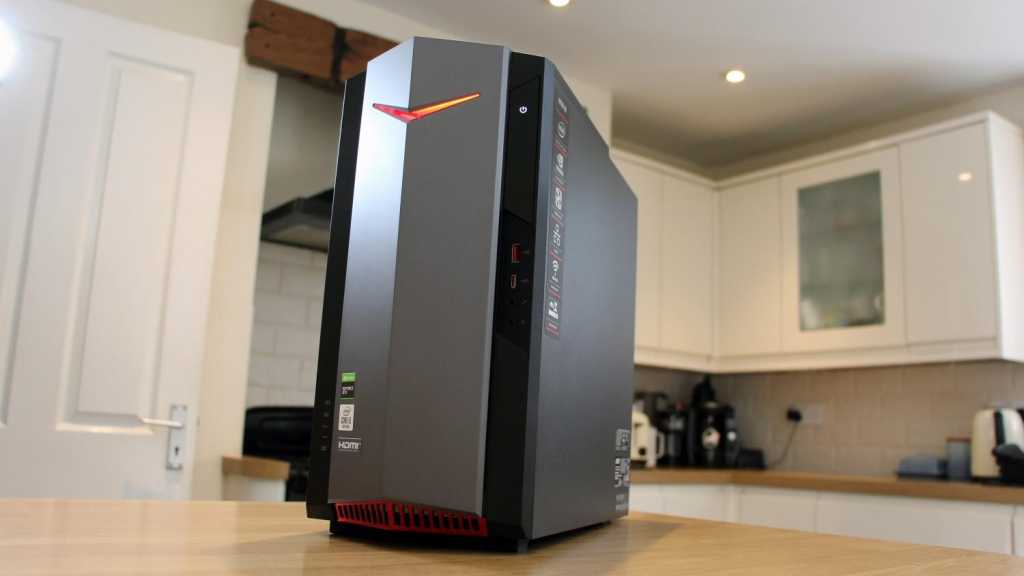 For those on a budget, the Acer Nitro N50 is solid. It may not have the power and features of pricier PCs, but it’s a capable and affordable option for single-screen gaming and eSports.

The Acer Nitro N50-610 is a gaming PC that doesn’t cost the earth, with change for £1,000. When most gaming systems command huge prices and don’t necessarily offer good value, this system stands out.

Acer’s latest machine, the N50-610 to be precise, does make compromises to hit its low price– so let’s find out if this budget option is a genuine bargain or if you’d be better off spending a little more on a better machine.

The Acer Nitro N50 uses the same underlying chassis as the Acer Predator Orion 3000, which means sturdy metal and plastic throughout alongside a modest 392mm height and 175mm width. Those humble dimensions mean that the Nitro can be placed into compact home configurations and easily transported, and the impressive build quality ensures that this rig will withstand frequent trips.

The Nitro differs from its stablemate aesthetically. The Acer Nitro N50 has a front panel with black metal, gunmetal grey plastic and a slashed indent that glows with red lighting. The front of the Acer has single USB 3.2 Gen 2 Type-A and Type-C ports and two audio jacks, which is reasonable connectivity – and they’re not hidden behind a flimsy door.

It’s certainly not ugly, but this cheaper Acer looks a little immature, and it’s not as eye-catching as the Predator. The Nitro misses out on exterior features, too – the more expensive Acer has RGB LEDs, a handle, and a headphone holder.

On the inside, the Acer Nitro N50 is underwhelming, with bare metal and untidy cabling. When it comes to upgrading, there’s a single drive bay for 2.5in and 3.5in hardware and a couple of spare memory slots, but that’s it. This PC is not supposed to be opened. There’s another rival that looms over this PC and the Predator Orion 3000 – literally.

The PC Specialist Magma R2 is taller, deeper and wider than Acer’s machine, but it looks better, with RGB LED fans, angled mesh and a huge glass side panel, and on the inside, it’s got neater cabling and more upgrade room. That PC Specialist system also has a far better warranty than the Acer’s one-year deal.

Note that some retailers supply the N50 with a keyboard and mouse but the review sample didn’t come bundled with either to test. Acer also lists the machine as having a wireless charging pad built into the case but again the test sample didn’t have this feature and it doesn’t look like any retailers are offering it either.

The Intel Core i5-10400F is a Comet Lake CPU, but little differentiates this chip from the older i5-9400F. The i5-10400F still has six Hyper-Threaded cores, and its base and boost speeds of 2.9GHz and 4.3GHz barely differ from the older chip. The Acer Predator Orion 3000 uses an eight-core i7-10700 CPU, while the PC Specialist uses a six-core AMD Ryzen 5 3600XT with better speeds and a superior architecture.

Elsewhere, there’s 8GB of dual-channel memory, a 256GB Kingston SSD and a 1TB hard disk. The SSD delivers read and write speeds of 1,644MB/s and 944MB/s – fine for keeping the PC responsive, but nothing special and not as fast as the Predator’s drive.

As usual with big-brand PCs like this, the motherboard is mediocre – it’s got DTS: X audio, spare memory sockets and SATA ports, but no spare M.2 connector or PCI slots, no aesthetic features and no on-board buttons or displays. At the rear, the Acer Nitro N50 has four USB 3.2 Gen 2 ports and two USB 2.0 ports, but only three audio jacks.

Connectivity is handled by dual-band Wi-Fi 6 (11ax) and Gigabit Ethernet, which is good. It wouldn’t be too surprising to find the older Wi-Fi 5 (11ac) at this price.

The Acer machines are similar when it comes to their specifications beyond the CPU and GPU, but the PC Specialist trumps both with more motherboard features, faster memory, better storage, and a more capable PSU. That’s the system to buy for upgrading and tinkering.

As well as comparing it to the Orion 300 and Magma R2, the Sabre MK1 and AlphaBeta i5 RTX are closer in price to the N50.

It’s enough pace to play any single-player title at 1080p and 1440p at decent quality settings – you’ll be fine unless you’re trying to play the market’s toughest games with every setting ramped up. The Acer Nitro N50 will handle eSports titles on smooth 144Hz panels, too.

That’s not to say the GPU is without flaws. Its lack of Ray-Tracing cores means it only averages an underwhelming 30fps and 17fps in Wolfenstein Youngblood’s Ultra tests – because that game uses Ray-Tracing. Turn Nvidia’s feature off, and those scores improve to 132fps and 83fps.

Those figures are good, but they’re still around twenty frames slower than Ray-Traced rivals. Both of those GPUs are in more expensive PCs, but they’ll run games at higher framerates now and in the future.

The Core i5-10400F won’t bottleneck games, and it’s easily fast enough to handle web-browsing with loads of tabs alongside Office applications and mainstream photo-editing. Here, though, is another area where this chip falls behind rivals: the Acer Nitro N50 scored 6,298 in PC Mark 10, but both rivals score nearer to 7,000 points.

In Geekbench 5’s multi-core test the i5-10400F scored 5,895 points, but the Acer Predator scores 7,497 and the AMD-powered PC Specialist scores 6,966. If you’re considering either of those pricier rivals, a Ryzen 7 CPU becomes an option – and with one of those you’ll score 8,500 points in Geekbench.

The upside of these mid-range components is solid thermal performance. The Acer Nitro N50 has no temperature issues, and it’s consistently quiet – there’s a modest high-pitched fan noise when running tougher games but if you’re wearing a headset or using speakers it’ll hardly be audible.

Three versions of the Nitro N50 are available in the UK. The model here costs £899, and there’s a £799 version that retains the CPU and memory but switches to a single 512GB SSD and downgrades to Nvidia GeForce GTX 1650 graphics. It’s a decent specification, but only for mid-range single-player games and eSports titles.

It’s available from Acer, Amazon, Currys, AO, Ebuyer and Very with some starting at £749. Amazon also has an RTX 2060 model with a Core i5.

Check out our chart of the best gaming PCs to see what other options you have.

The Acer Nitro N50 is small, sturdy and affordable. The lower price means a modest specification, but it still has enough ability to handle 1080p gaming, some titles at 1440p and eSports at 144Hz, and the CPU can handle day-to-day use. It’s got some decent connectivity and storage.

The lower price means noticeable compromises. The GTX 1660 Super lacks Ray-Tracing and can’t compete with more expensive rivals for speed, and other PCs have more CPU power if you need a system for work as well as play.

As usual with a big-brand PC like this, the Acer Nitro N50 has an underwhelming motherboard and interior. Buying from a boutique builder will get you better hardware in those departments, even with the same budget, and a longer warranty.

However, the Nitro N50 is attractive and well-made and the downsides are understandable.