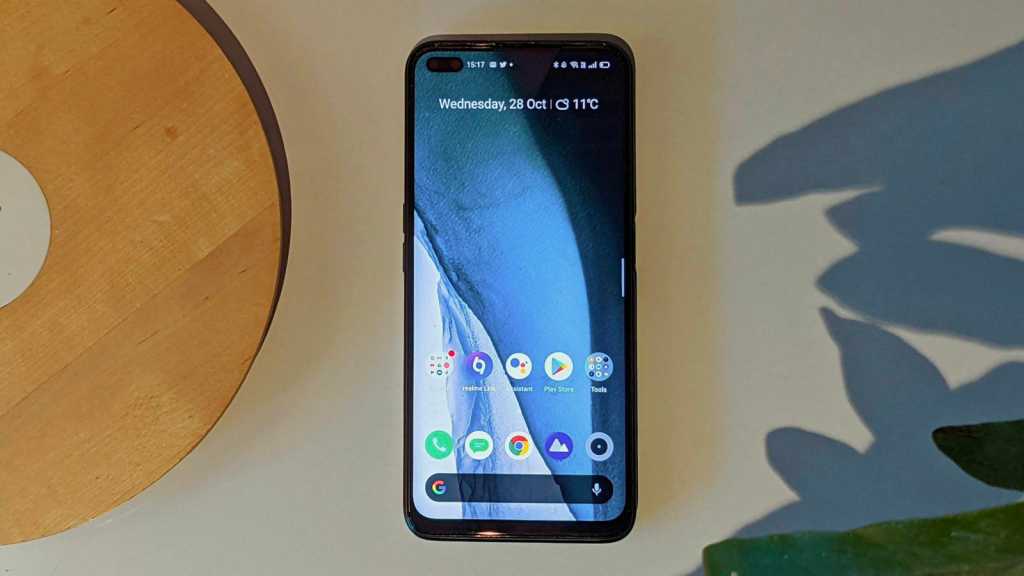 Punching well above its weight, the Realme X50 5G strikes an outstanding price-versus-performance balance. Along with 5G, a powerful processor and a smooth 120Hz screen, the X50 also impresses with both its camera and battery longevity.

When the Realme X50 Pro made its debut in the first half of the year it redefined expectations for how much a powerful 5G flagship phone should cost in 2020 and now the standard Realme X50 5G is looking to do the same in the mid-range market.

A glance at the spec sheet and the X50 5G has a pretty sizeable overlap with phones at twice its sub-£300 asking price, meaning that although Realme doesn’t yet have the brand recognition of other phone makers, it has the potential to win customers over simply on the impressive price/performance balancing act that this phone appears to strike.

You can’t blame Realme for finding a design that works and sticking with it. On the upside, the X50 doesn’t look half bad – not least because it supports an eye-catching back with the company’s signature reflective patterns etched into it; looking great in both colours but particularly the Jungle Green finish we tested. At the same time, it can be hard to tell Realme’s various phones apart, which is an issue if you’re looking to stand out from the crowd.

The use of a glass back isn’t something we’d necessarily expect at this price point, especially considering what else the X50 brings to the table, hardware-wise. That gloss finish picks up fingerprints incredibly easily, so the provided clear case, although bulky, is a must if you want to enjoy the reflective light show unabated.

From the rounding along the sides to the hardware controls, the X50 sports a nice hand feel, with the most obvious admission to the phone’s more affordable nature evident in its thickness, at 8.9mm. It’s a tad weighty too (194 grams), which edges towards the realm of being a little too heavy to feel elegant. But these are, admittedly, nit-picky criticisms.

There’s no headphone jack, despite that waistline and no IP-certified dust or water resistance, but Realme does pre-fit a screen protector to accompany that case and there’s a snappy fingerprint-cum-power key cut into the right side of the phone’s frame, which seems reliable and responsive.

Realme has been one of the biggest advocates for high refresh rate displays, bringing this hot feature to many of its devices, across a host of price points. While the jump from 60Hz to 90Hz (as found on the X50 Pro) feels more significant than moving from 90Hz up to 120Hz, the fact that a phone at this price delivers such a feature at all is still wholly novel.

It makes navigating around the UI feel extra responsive, rendering interface animations with an appealing fluidity and ensuring that the X50 appears to operate with the same degree of ‘snap’ as any top-tier flagship would.

The caveat to the display is that Realme opted for LCD technology over a pricier OLED panel (as on the Pro), meaning aspects like vibrance and contrast aren’t as competent (also unlike the Pro model, there’s no HDR viewing to speak of). The X50’s maximum brightness also falters against bright sunlight, although the phone remains wholly usable.

As for audio, with no headphone jack, you’ll have to turn to USB-C headphones or connect a pair of buds wirelessly over Bluetooth (5.1), while the single down-firing loudspeaker is exactly that – fine for calls but not built for music playback, primarily due to a lack of bass.

Realme’s own UI is one of the heavier-handed skins out there, in this instance running atop Android 10, but its foundation – Oppo’s ColorOS – had already come on leaps and bounds before Realme even existed as a brand.

The home screen and apps drawer operate as they do on stock Android, with an ever-present Google search bar, support for button or gesture navigation and the ability to summon the Google Assitant by swiping in from the bottom corners or long-pressing the power key. It’s beyond this where the experience is more unique to Realme UI specifically.

Some elements, like the settings menu, will likely come across as a little overwhelming to most users, at first, while other quirks and features will appeal to some more than others, generally speaking.

The Smart Assistant screen (to the left of the main home screen) and the pull-down universal search bar don’t bring much to the table, while in contrast, the Smart Sidebar is great for keeping frequently used apps or utilities (like screen recording) at hand and being able to jump into split-screen multitasking in an instant.

One-handed mode is an appreciated must-have on a phone of this size while Game Space adds some additional controls over notifications, performance and networking when gaming, to streamline the experience for competitive play.

Most phones nowadays sport multiple camera sensors but Realme’s phones consistently clock in with the highest component count. The X50, like it’s Pro-branded sibling, totes a total of six cameras: four on the back, two on the front, although the setup is a little different in this instance.

Realme isn’t really known for its camera prowess – although the X3 SuperZoom is mighty impressive in specific situations – as for the X50, the sensor setup is a real mixed bag. The main 48Mp snapper undoubtedly outperformed our expectations, particularly in low light, and that’s before you factor in its night mode.

Then there’s the 8Mp ultrawide sensor, to add a little more versatility to the shooting setup, while the 2Mp macro snapper is easily the weakest camera on the entire phone. Letting you take close-up shots that lack detail or flexibility to be used out of specific social media situations.

Shots generally offer a Samsung Galaxy-like vibrant finish and surprisingly good detail in the shadows, without blowing out the highlights that often. That fourth sensor – a 2Mp monochrome portrait lens – presumably lends its talents to the phone’s capable edge detection and bokeh, when shooting portrait shots.

Dive into the settings and you’ll find manual controls – including RAW capture – via Pro mode, while video tops out at 4K/30fps. With no optical setup, image stabilisation when shooting video is wholly electronic but does a respectable job of keeping footage both level and sharp.

Along with that high-refresh-rate screen and 5G support, one of the other aspects of the X50 that belies its price is its processor. The extremely popular Snapdragon 765G that’s found in a myriad of 2020 mid-rangers – including the excellent OnePlus Nord – as well as fully-fledged flagships, like the Google Pixel 5 and LG Velvet, is running the show on the X50.

Paired with (at least) 6GB of RAM (up from a baseline of 4GB on rivals like the Moto G 5G Plus), the X50 seems wholly comfortable with demanding actions; from multitasking to gaming.

Our review sample (as with the devices that served a number of publications’ reviews) wouldn’t allow benchmarking, however, the retail versions of the phone should. Previous issues like Widevine L1 are also a non-issue, with Full HD streaming from platforms like Netflix and Prime Video on offer.

In practice, navigating around the X50’s UI did reveal the occasional stutter occasionally but these were so infrequent that it was chalked up to the software build tested – something the company has undoubtedly fixed for retain or could easily address with future software updates.

One of the big surprises of the X50 was its battery life. With a capacity of 4200mAh, the cell inside this phone is big but not to a degree that would instil confidence in its longevity without proper testing.

While benchmarking the battery with artificial tests was off the table, in real-world usage – which is arguably more useful – the phone defied expectations, consistently delivering up to eight hours of screen-on time between charges.

This translated to about to around two days of fairly demanding use at a time, which included spats of GPS navigation, video streaming, social media usage, gaming and camera usage.

We’ve tested phones with larger batteries that don’t come close to this, suggesting that Realme UI includes some heavy power management behind the scenes to keep apps and background processes in check.

There’s also the matter of fast charging, and while the standard X50 doesn’t boast the Pro model’s astounding 65W wired charging, the 30W ‘Dart Charge’ fast charging on offer was still able to refill the phone’s battery by over two thirds in just 30 minutes, with a full charge in approximately an hour.

The Realme X50 5G burst onto the market part way through 2020 with an impressively competitive £299 price tag; undercutting other excellent Snapdragon 765G-powered rivals like the OnePlus Nord and the Moto G 5G Plus.

The crazy thing is the price has already started to drop even further, meaning much like the Realme X50 Pro did within the flagship market, the standard X50 presents itself as one of the most compelling value-for-money propositions available right now.

You can pick the phone up direct from Realme’s website or retailers like Amazon – where the discounts and deals seem more prevalent (it’s already down to £279, at the time of writing).

As with the Pro model, Realme had to choose carefully about what to cull and what to keep in order to have the Realme X50 5G stand out from the crowd and still have it remain as affordable as it has.

Against similarly-priced rivals, like the Moto G 5G Plus, Xiaomi’s Poco X3 NFC and OnePlus Nord, it beats them out on one or more areas, and while it might not offer as well-rounded a package as pricier alternatives using the same chip, there’s little that can compete when it comes to that all-important price/performance balancing act.