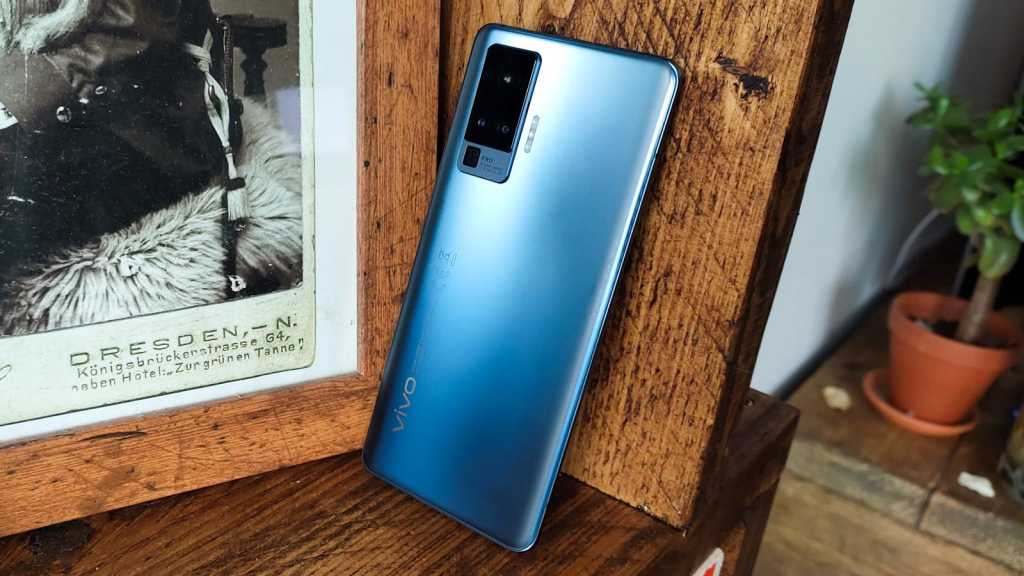 Is the Vivo X51 a good phone? Most certainly, with a solid camera, beautiful display, and phenomenal design. But at this price the X51 doesn’t feel competitive. It’s a great phone, but it’s bad value.

The Vivo X51 is the Chinese company’s first phone to officially launch in the UK, though it may strike a feeling of déjà vu in some familiar with the company’s X50 series.

The X51 is in fact a renamed version of the Vivo X50 Pro, which released in China and some European markets earlier this year. The hardware is essentially identical – it even still says ‘Pro’ on the camera module – but it bears a new name, a few software tweaks to suit Western markets, and a hefty new price tag.

So how does it hold up as Vivo’s debut in the UK? Let’s find out.

If you’re after a good-looking phone, the X51 is a stunner – not really any surprise since we said the same thing when we reviewed an imported X50 Pro.

The back features a gorgeous frosted glass finish called Alpha Grey that’s smooth but not slippery. I particularly liked the tall, slim design, which made the X51 very comfortable to use with one hand – which most women will tell you is a struggle when phones so often flirt with phablet status, even before a case is added.

The X51, instead, is a treat to hold and is wonderfully light too, at just 181g. Vivo also keeps edges curved, which only underscores the comfortable feel of the device.

There’s no headphone jack here, but it does ship with a USB-C adapter for your existing wired buds, and supports Bluetooth 5.1 connectivity.

The X51 features a quad camera set-up on the back made up of a 48Mp main sensor, a 13Mp 2x zoom lens for portrait photos, an 8Mp ultrawide angle, and an 8Mp 5x optical zoom lens. On the front there’s a 32Mp selfie camera.

The main camera delivers vivid photos, though close examination reveals that shots aren’t as detailed as they first appear. Macro shots in particular suffer – the ultrawide doubles as a macro shooter, and doesn’t hold up – as do photos out of the 5x optical lens, which is decent enough but won’t trouble the excellent periscope photography delivered by recent Oppo and Huawei handsets.

Of course, the crowning glory of the X51, as in the X50 Pro, is the integrated gimbal in the 48Mp main camera.

While the gimbal does smooth out motion, don’t expect a professional level of stability. If you have an unsteady hand to begin with or are walking while recording, you will notice the image jump to counter the movement.

You can also film video in 4K at 60fps – because why not?

When it comes to night photography, the X51 isn’t as impressive as I hoped. It’s not bad. It’s just fairly standard – which is slightly disappointing given that in theory the gimbal’s stabilisation should help the phone maintain detail during the multiple exposures required for lowlight photography.

That’s even more so given the phone has features like Astro Mode – this allows you to use a long exposure on a starry night and counter any blurs caused by the rotation of the earth.

When I took a shot of the London skyline from my window, the lights in the distance appeared blurry despite the gimbal’s support. Lowlight shots of closer subjects kept their distance better, but results are definitely a mixed bag, which is a shame coming from what should be the phone’s big selling point.

The X51 delivers decent specs, with a Snapdragon 765G joined by 8GB RAM and 256GB storage (plenty of room for all the 4K videos you’ll create when experimenting with that gimbal).

The 765G is a mid-range chipset that won’t compete with proper flagships when it comes to competitive gaming, but delivers more than enough performance for day-to-day use, along with 5G support.

In our benchmarks, the X51 is generally neck and neck with the X50 Pro, unsurprisingly. What’s more notable is how other premium midrange devices generally outperform the X51, even ones that cost less – in fact the X51’s closest match on pure performance is the OnePlus Nord, which uses the same 765G processor but starts at just £379/€399.

The UK market is competitive and Vivo will have to either step up its specs or reduce its prices to survive.

Look to the outside and you find the real attraction of the X51, which packs a 6.5in AMOLED screen with a Full HD+ resolution (2376 x 1080) and HDR10+ support. If you’re looking for a phone on which you can spend hours streaming Netflix or YouTube – or infinitely scrolling through Instagram – the X51 won’t disappoint.

Colours look vibrant, dark and black tones are rich, and the 90Hz refresh rate makes animations smooth and effortless. Of course, 90Hz refresh rates – and faster – are available at all sorts of price points, and the OnePlus 8T includes a 120Hz AMOLED at the same size from just £549. So great as the X51’s display is, it shouldn’t be the only reason you buy the X51.

Like the X50 Pro, the X51 operates on Funtouch OS, Vivo’s own operating system based on Android 10 (though Vivo says the X51 will support Android 11 by the time it reaches the market).

Funtouch OS has been a gripe for us when we’ve reviewed previous Vivo handsets, including the X50 Pro. However, Vivo has addressed many of the setbacks we identified in FunTouch by adapting it for the European market.

FunTouch on the X51 offers a clean UX, which means no bloatware and a simplified experience across the board. It’s not the best Android skin out there, but it feels pretty damn close to a pure Android experience, so no complaints here.

Battery life on the X51 will not disappoint. With a 4315mAh capacity, you can easily push the X51 into two days of use without charging. Of course, that depends on how vigorously you use your phone. If you’re constantly streaming, while flitting between various social media apps, you’ll likely see a shorter life.

In our tests, we completely drain the battery before we start measuring how quickly the phone charges from zero. Depleting the last two percent of the battery was very much like that scene from Hitchcock’s Torn Curtain where Hermann Gromek refuses to die. It’s a hardy battery alright.

When it does eventually die, you can charge it up to 65% in 30 minutes thanks to the 33W wired charging support, though there’s no wireless charging option.

The Vivo X51 went on sale in the UK on 29 October and costs £749. eBuyer is the only retailer offering the phone at the moment. In Europe, the phone costs €799 and will be available in Germany, France, and Italy.

That’s a lot for a phone using the mid-range 765G processor, so the X51 will only be worth the price if the unique gimbal camera is enough of a draw to overcome its other spec shortcomings. And if you are keen on it, you might even find it’s cheaper – if slower – to simply import an X50 Pro, which currently starts from just £509.

For £599 you can pick up the Pixel 5G with a 765G processor and a pure Android experience, and £549 will get you the OnePlus 8T with a more powerful Snapdragon 865. You can even pick up the iPhone 12 if you stretch your budget £50 more – though admittedly these comparisons all ignore the fact that the X51 starts at a generous 256GB storage.

Check out our full ranking of the best phones for more flagship options.

Is the Vivo X51 a good phone? Most certainly, with a solid camera, beautiful display, and phenomenal design. But its arrival is just slightly mistimed.

We’re witnessing a race to the bottom, even in the flagship arena. Major brands like Apple, Samsung and Google are leaping into competition against disruptive brands like OnePlus and Xiaomi, who offer premium phones at affordable rates.

Vivo’s entrance into the Western market has been long awaited by some, but at this price the X51 doesn’t feel competitive. It’s a great phone, but at full price it’s bad value.