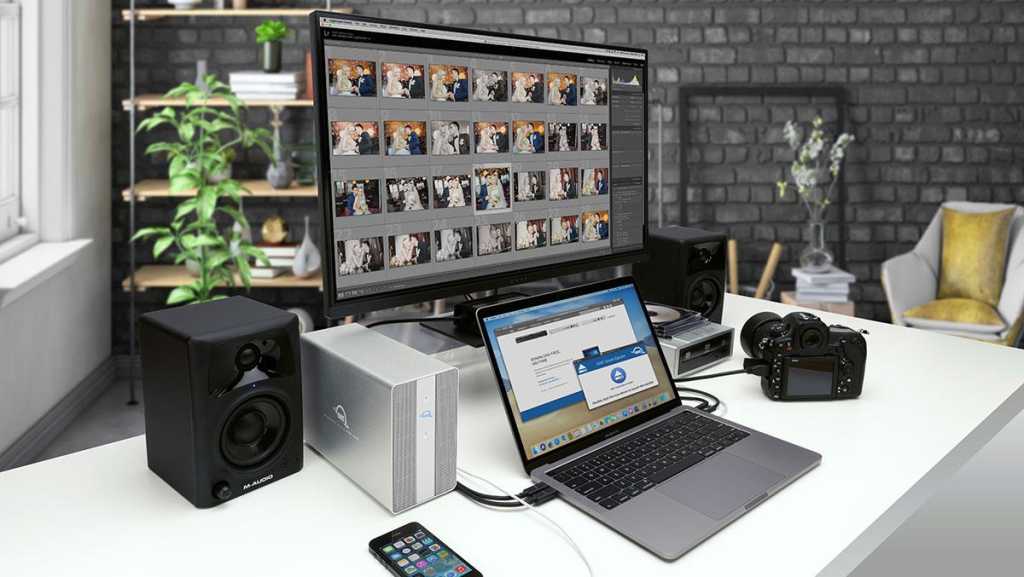 Backing up is serious business, and the OWC Mercury Elite Pro Dual with 3-Port Hub is a seriously well-equipped storage solution that can be used in various fast and secure RAID and other arrays.

The OWC Mercury Elite Pro Dual is a DAS (Direct Attached Storage) enclosure that boasts fast universal USB-C and USB-A connections so it can back up PC, Mac, iPad, Xbox One and others.

It looks great, is pretty compact, and won’t shame your desk like many boring drive enclosures.

The Mercury Elite Pro Dual has bays for two drives (HDD or SSD) and can be configured in various RAID or other setups at up to 32TB of storage.

Backing up may be boring but it can save you when you least expect to need it. System failures and hard-drive crashes are no fun if you are busy on a job, or when you realise that ten years of your precious digital photos are suddenly gone.

Even super-fast solid-state drive storage (SSD) is affordable nowadays, and an enclosure such as OWC’s Mercury Elite Pro Dual offers you a wide choice of drive types and capacities depending on your needs.

It can be manually configured for RAID settings for 0, 1, Span or JBOD (to be explained soon), and accommodates any 2.5in or 3.5in SSDs or HDDs.

The Mercury Elite Pro Dual has some handy treats at the back, too, with two USB-C 3.2 ports (one to connect to the host computer) and two USB-A 3.2 ports – all at a racy 10Gbps and fully powered.

The product is available direct from OWC in the EU, but not yet on local Amazon stores. If buying direct you need to order the enclosure and then the drives, and install them yourself.

RAID 0 allows you to turn two or more drives into one larger, faster storage unit.

JBOD allows you to work with multiple, independent drives through one simple connection.

RAID 0 and Span can combine multiple inexpensive SSDs to create what would cost a lot more as a single drive.

Using RAID 0, a file is split – or “striped” to use the technical term – into parts and distributed across the multiple drives. This makes read and write faster as the drive heads work together on different parts of the same file rather than one drive laboriously working on its own.

Large files can be opened quickly when they are being read from two places at once.

You choose RAID 0 for the speed and rate of access.

While faster and larger, RAID 0 setups are vulnerable to crashes, and if one drive fails they all do as every file is distributed across all the drives.

RAID 1 is the solution. It mirrors one to drive to another. This way, if one drive fails, all of its contents are exactly mirrored on the second, meaning a drive failure is protected by the surviving disk.

So if you buy two 2TB SSDs, one is used as your storage, while the other mirrors everything on it in case of failure – this is called redundancy. While you don’t get to use the full 4TB of the two 2TB drives, you can be reassured that your data has a full level of safety built-in.

Span – an array rather than RAID – is a setup where multiple drives can behave as a single drive in that when one drive is full, it overflows into the next one. It’s different to RAID 0 in the construction and layout of the data.

It’s not faster like RAID 0 is, but it is a convenient and easy way to work between storage devices and upgrade as you like. In the event of a drive failure, data recovery should be more possible on a Span setup as files are mostly on one or another drive but rarely multiple.

JBOD (Just a Bunch Of Drives, and also known as Independent Drive Mode) uses individual drives, independently visible, but attached to the host system by one connection rather than multiple ports.

You’ll need a Phillips screwdriver (not included) to remove the two screws at the back.

Then follow the online instructions to fit your chosen drives, unless you purchase with OWC drives already included.

Then you can set your RAID mode at the back by adjusting a dial to the desired mode.

RAID 0 and 1 require exactly the same capacity of drive if installing two.

The Mercury Elite Pro Dual has space for two drives of most types, and can be configured at the point of purchase, or just bought as an enclosure for your own drives.

With fast USB connections and SSD inside, the Mercury Elite Pro Dual can deliver 1GBps data-transfer speeds (at RAID 0), depending, of course, on the drive specifications and application.

The Mercury Elite Pro connects to any Mac or PC with an available USB port (USB-C or USB-A). You can also work cross-platform with Macs and PCs using OWC’s MacDrive software (sold separately, from $49).

It’s perfect for USB-C laptops, and should be fast enough for Thunderbolt 3 laptops such as Apple’s latest MacBooks.

If your host computer has Thunderbolt 3 ports, it will still be compatible with this enclosure, but you will lose a chunk of T3’s 40Gbps bandwidth. That said, it is still very fast at 10Gbps, and without the significant extra cost of Thunderbolt.OWC does have a Thunderbolt 3 storage enclosure, too.

It supports full charging of all connected devices, except the host.

The Mercury Elite Pro is compact at 5.8in high and 3.3in wide, and is aesthetically superior to most DAS or NAS enclosures.

Full-speed cables are included, as not all USB cables are rated for the 10GBps that this enclosure boasts.

At the back is the three-port hub, plus the USB-C to host connection port.

OWC’s free Dock Ejector app lets you safely dismount the OWC Mercury Elite Pro Dual and any additional external drives connected to it from your computer in a single click. All data will have been safely written before any drive is unmounted, protecting against accidental data loss or corruption.

The OWC Mercury Elite Pro Dual with 3-Port Hub is a universally compatible DAS (USB-C and USB-A) that is fast, looks great and can be configured in various RAID setups and other drive arrays.

Backing up is serious business, and this is a seriously well-equipped storage solution that can be used in various fast and secure RAID and other arrays.