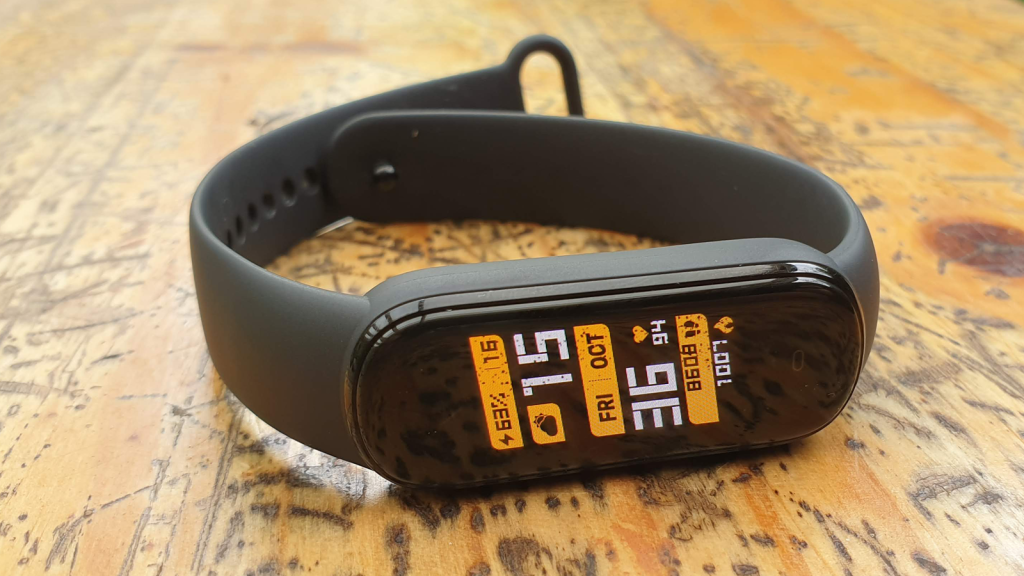 If you’re looking for a no-nonsense fitness tracker with some notifications on top, then Amazfit is a name worthy of your attention.

The brand is part of Huami, the company previously responsible for making Xiaomi’s cheap and very cheerful wearable products, including the excellent Mi Band 5. Now, the company is back with its latest tracker which sports a feature that Apple made a big deal about with the Apple Watch 6. We take a look at the Amazfit Band 5.

If you’ve read our review of the Xiaomi Mi Band 5 then you will have already seen most of the design and construction of the Amazfit Band 5. The two devices are practically identical, which is no surprise when you consider they were probably assembled on the same production line. 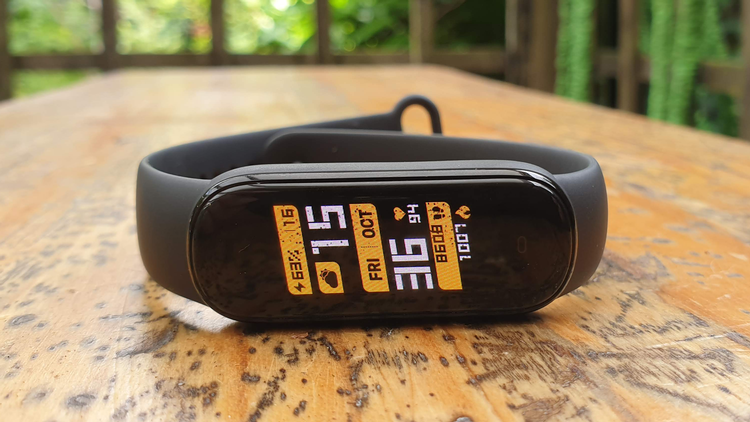 The vertical, rectangular polycarbonate body is home to a 1.1in AMOLED display with a button placed underneath. This is the only control available other than the touchscreen itself, so the chassis is smooth and unencumbered by switches or ports.

A TPU strap is attached by sliding the Amazfit body into the loop at the centre of the rubber strip, making it easy to remove, clean and replace. Interestingly, the Xiaomi Mi band 5 straps are compatible with this device, further increasing the similarities.

The strap is fastened by sliding it through a hoop at one end and pressing the rubber clip into one of the holes on the other length. The 162-235mm range means that those with smaller wrists will find it a bit loose unless you’re willing to make a few holes of your own. It also lacks the security of a double loop like on the Samsung Galaxy Fit, so catching the Amazfit Band 5 on something could see it leaving your wrist in a hurry. 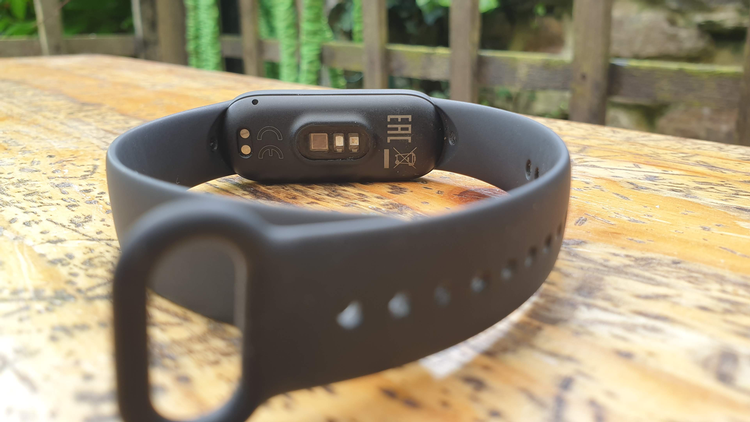 Flipping the device over reveals a panel with various sensors, plus the twin charging plates for the included magnetic, but sadly proprietary, charger.

It’s a compact, lightweight tracker that sits comfortably on the wrist, making it easy to forget that you’re wearing it at times. And thanks to the 125mAh lithium-ion polymer battery, you won’t need to take it off to replenish the power banks very often, as I managed to get 12 days of use from a single charge and if you turn off some of the settings them you can almost double the battery life.

While the Amazfit Band 5 does a fine impersonation of the Mi Band 5, and shares many of the same features, the former offers a more complete package for only a marginally increased cost.

The display is bright and clear when used indoors or at the gym (remember those?), but we did have to boost it right up to the maximum brightness to be able to read it outside in bright sunlight. There’s no automatic brightness setting, probably due to the lack of an ambient sensor, so you’ll need to adjust as you go. 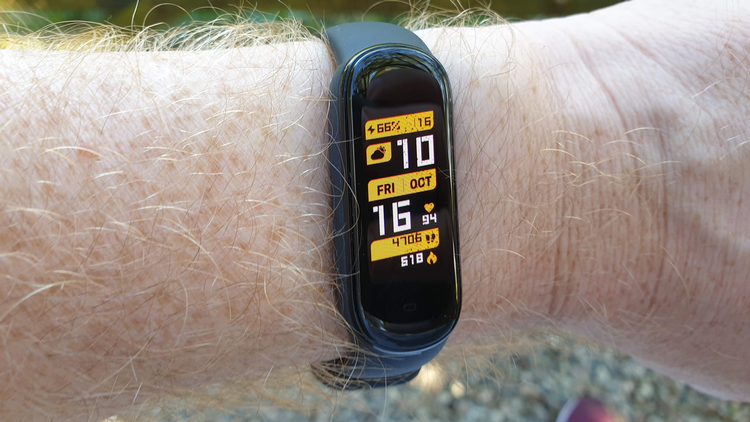 Reading can be a challenge at times due to the tiny fonts employed on several of the available watchfaces. Sub-menus also feature diminutive text, so if you’re not eagle-eyed then you’ll need to raise your wrist quite high to be able to keep track of what’s going on.

Thankfully, the Watch Face Store has a good range of free alternatives, ranging from simple designs to more intricate ones that show health related metrics. All of these can be quickly swapped via the Zepp app on your smartphone. 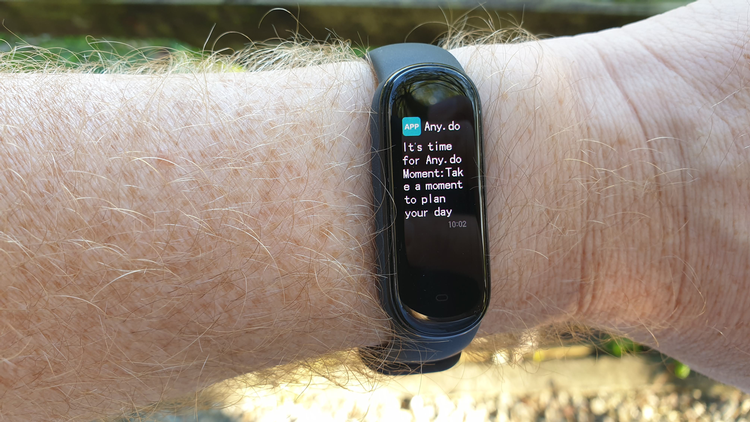 Using the touchscreen interface is a straightforward and responsive affair, with swiping up and down cycling you through a list of apps such as notifications, events, heart rate and other staples.

Swiping left opens the Amazon Alexa app which allows you to set up alarms, appointments, dictate notes and other voice commands. While this is a nice feature, we did experience several ‘server is busy’, ‘can’t connect’ and other type annoyances while using the Amazon app. This could well be teething problems though, and having a fully functional Alexa on an activity tracker at this price would be a huge bonus once the kinks are worked out.

The accompanying Zepp app allows you to change the order of the apps that appear when you swipe on the Home screen, so it’s easy to tailor the Amazfit Band 5 to your person tastes and remove any extraneous options.

There are several types of health monitoring options on the Amazfit Band 5. There’s the standard heart rate sensor, which allows instant readings or continual monitoring throughout the day and night. We found the readings to be reasonably accurate, and certainly more stable than what we experienced with the Samsung Galaxy Fit. 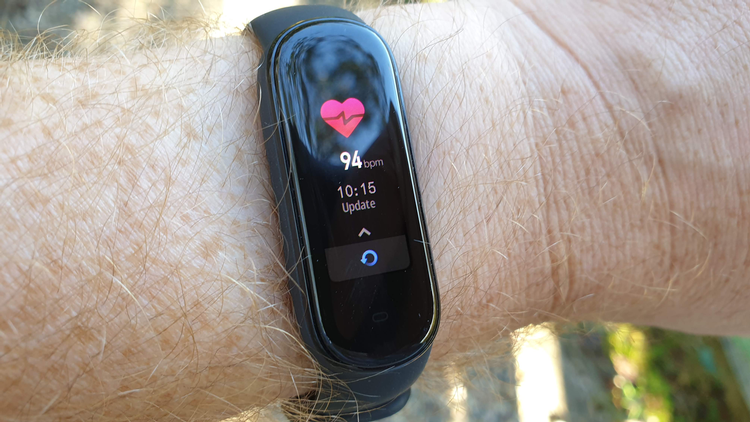 The addition of a blood oxygen measurement is impressive, with Apple touting this as the banner feature in its new Apple Watch 6. Of course, as with anything like this, you should only use it as a rough guide.

I didn’t have access to a lab or blood tests, so I can only take the Amazfit’s word for it that my levels were nice and high throughout the time with the band. Still, it’s good to have another metric being monitored, especially as blood oxygen is linked to respiratory issues, which is sadly an important thing to keep an eye on while Covid-19 remains a part of life. 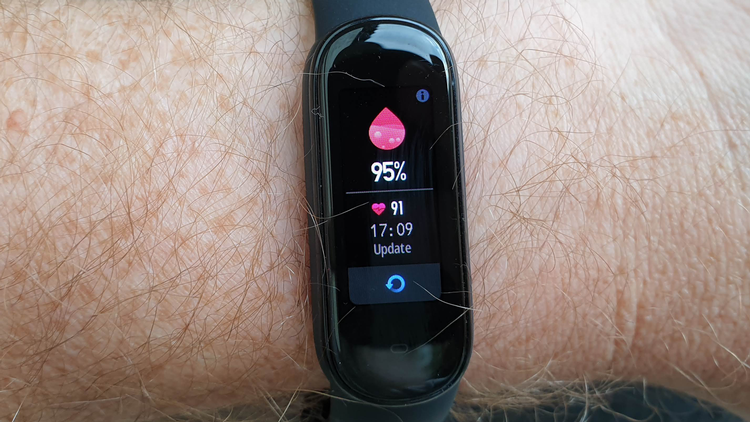 Sleep monitoring is included, with a breakdown of the hours you were in bed, plus an analysis of light and deep sleep. Again, this is a rough idea of your sleeping patterns, as my reports stated that I hardly ever reached deep sleep throughout the couple of weeks of wearing the band.

This could be something to do with how I rest, as I’m sure my sleep must get deep at some point, but I did find it very useful to track the times I went to bed and got up again, which usually proved quite accurate.

Afternoon naps are now tracked as well, but as I rarely take them it was a little lost on me. Saying that, it does encourage me to try experimenting with the concept, you know, for science.

There are also a couple of additional features that measure stress or encourage you to engage in concentrated, meditative breathing for a minute or two. Both are welcome inclusions and ones that can help you stop and rest for brief periods throughout the day.

Of course, as this is a fitness tracker, you’ll also find a range of trackers for when you’re exercising, including running, cycling (indoor or outdoor), treadmills, ellipticals, yoga, and swimming. The latter is made possible by the 5ATM resistance, although due to our local swimming pool being closed due to the pandemic, we couldn’t test this out.

The Amazfit Band 5 doesn’t feature auto-sensing of exercises, so you’ll need to manually start the workout mode, but there is at least a setting that means the band will prompt you if it notices increased exertions. There’s no onboard GPS tracking, which is to be expected at this price, but the band can use the GPS on your phone so that the data is recorded on your reports.

All of your progress is recorded in the Zepp app and you can review your performance either on a daily, weekly, monthly or annual basis. The PAI system awards you points for various activities and if you fill out the quite detailed breakdown of your body size, then it can closely monitor your improvements over time and get the boost of hitting the targets it sets. 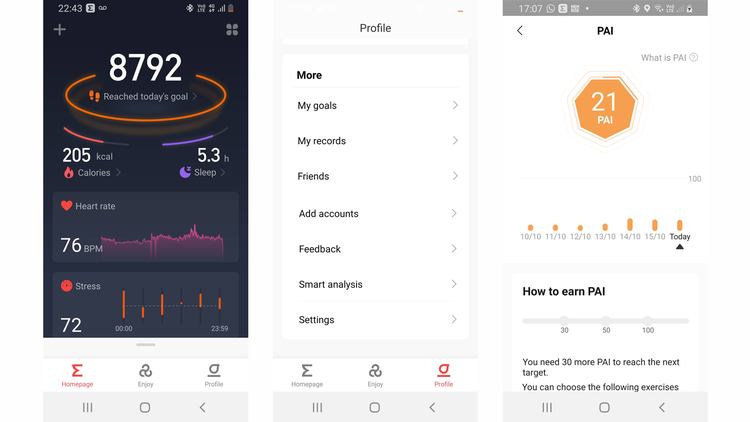 If you invest the time to explore all of the PAI settings, then it does seem that the Amazfit Band 5 could be an excellent companion on your path to better health and fitness. The graphs and metrics give you a good insight to your body, which is half the battle.

Due to a painful back injury that curtailed my ability to exercise about half way through the review, I had time to explore more of the non-fitness features on the Amazfit Band 5. There’s a decent amount on offer, with general notifications of text messages, WhatsApp communications, alarms, reminders, control over music, podcast or audiobook apps (replete with volume adjustments – hurrah!), alongside weather reports, and upcoming events from your calendar.

Probably the weirdest thing on offer is being able to use the band as a remote control for the camera on your smartphone. Just open the camera app and set it up ready to capture the image, then tap the shutter button in the camera section of the band and bob’s your uncle. No idea what you’d need it for, but it’s a fun thing to have on-board.

These features are all useful and only hampered by the inability of the band to read emoji or other meta-data. So, you often end up with some odd glyphs at the beginning or end of messages, but the main text is all readable. It takes a little while to get used to the swiping required to reach the relevant app, but muscle memory soon makes it second-nature.

The Amazfit Band 5 launches on 25 October and may appear from other retailers once it goes on general release.

For alternatives, see our roundup of the best fitness trackers.

It’s a mark of the Amazfit Band 5’s capabilities that I kept expecting it to do more than is reasonable for a device at this price. It’s no Apple Watch, but it’s not trying to be. Instead, for less than £50/$50 you get a solid fitness tracker with plenty of options, decent waterproofing, and a comprehensive health app to help you make sense of your exertions. Add to this the Amazon Alexa feature and controls for music apps, events, and bizarrely even the option to use it as a remote control for your smartphone camera, and there’s no doubt that this is a true bargain.