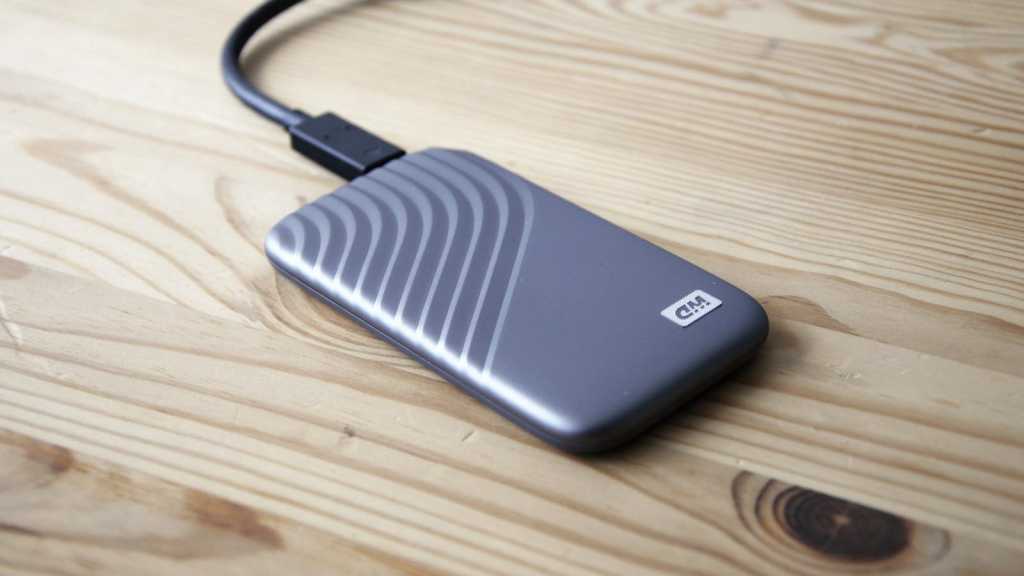 The new My Passport SSD might have the performance to delight with a choice of USB ports, but the cost is prohibitive when compared to other portable SSD brands. The noticeably short USB cable also makes it difficult to use.

The original My Passport SSD arrived two years ago, and despite being on the expensive side, most reviewers liked its aesthetics and functionality.

That original hardware used SATA SSD technology capping its maximum performance at around the 400MB/s for reading and writing. The new 2020 model is NVMe based, allowing it to more than doubles those numbers and come with less geometric styling.

Historically, Western Digital has sold boatloads of My Passport drives, so will the buying public be as enthusiastic about this one as they’ve been for other models?

Based on how gorgeous the original My Passport SSD looked, the new design is something of a mild disappointment in both the visual aspect and feel. Its predecessor had a stylish metal half for the wavy motif that felt cool to the touch.

The new model might be metal skinned, it is hard to tell, but the outside is thin and almost indistinguishable from painted plastic. The upside of that engineering decision is that this is one of the lightest portable SSDs we’ve ever tested at only 45.7 grams, not including the cable. 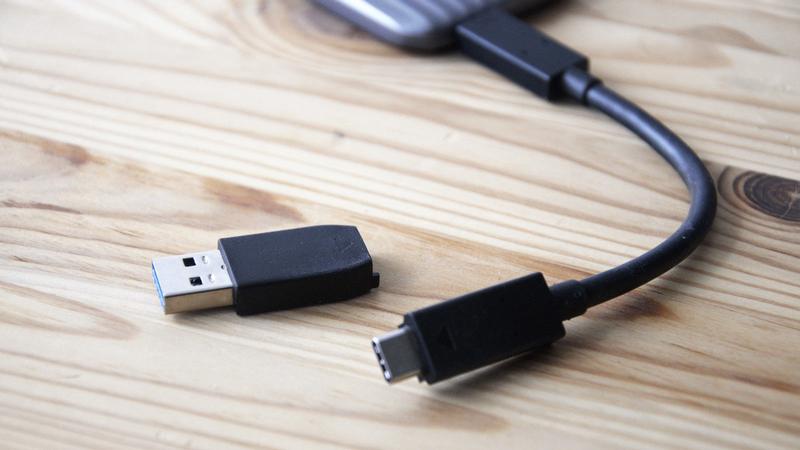 There is only one cable included, but an adapter is included to enable the drive to connect to the older Type-A USB port and the more modern Type-C variety. However, the cable part is remarkably short at just 10cm, making it fine for laptop users with immediate desk space but unsuitable for desktop computer users with rear-mounted ports.

There is no LED to indicate activity, and no pouch to hold the drive and cable for transportation. The minimalist ethos of the outside doesn’t continue internally, thankfully, as that part is far away from the technology that this unit replaces.

According to several people, although not confirmed, inside this drive is a derivative of the WD SN550 M.2 SSD, and as this was designed for NVMe connection, the performance difference between this and SATA based designs should be significant.

The caveat to achieving these performance levels is the port you insert the drive into. Because an old USB 3.0, now retitled USB 3.2 Gen 1, doesn’t have enough bandwidth to hit those levels. Therefore, to get optimal speeds requires a USB 3.1 Gen 2 receptacle, in either Type-A or Type-C format. Check the specs of your machine if you’re unsure. 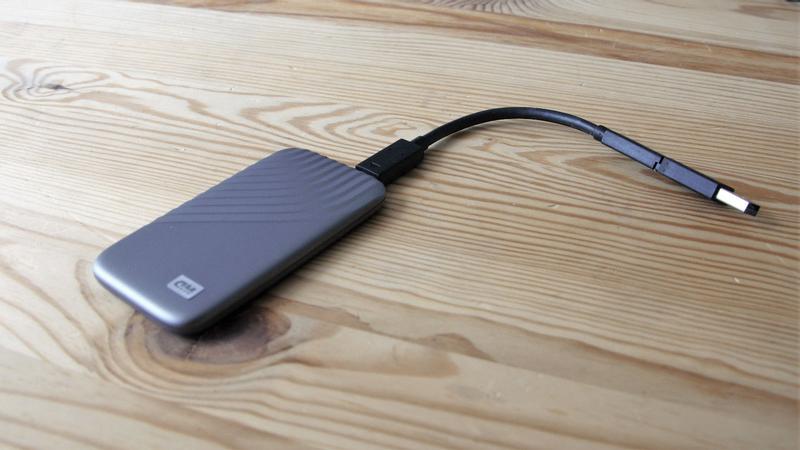 We’ll talk about the difference this makes later, but if you don’t have a Gen 2 port, then there is little point in spending the extra over the original My Passport SSD that still can be found at some retailers. Unless you just want to futureproof.

Where this product differs from what so many others are offering is that it comes with a sophisticated suite of software called ‘Discovery’ that is provided on the drive for both Windows and Apple Mac.

Installation of these tools takes only a few minutes, and it allows you to import data from Google Drive, Microsoft OneDrive and Dropbox to the host system and back up local contents to the external drive. Or, that’s what it should do.

Because at the time of reviewing the three Discovery modules that include WD Security, WD Backup and WD Drive Utilities, none of them recognises the My Passport SSD (2020) edition as being a device they can work with.

I referred this issue to Western Digital who at the time of writing, haven’t brought a solution. I suspect that this is merely a coordination issue between the hardware and software development teams, and should be smartly resolved with a new release of WD Discovery suite.

When this software is fixed, the tools provide a basic means to use the external drive to secure files and folders, AES 256-bit encrypt the drive with a password and run various drive tests. 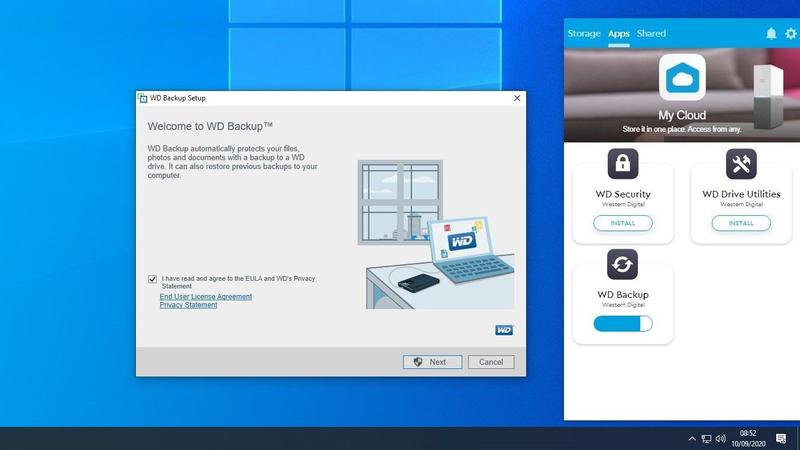 The most useful element is the WD Backup, but regrettably, it only makes backups on an hourly basis at best, and not in a live context – like cloud storage – that this device would be perfect for.

Western Digital has two software utilities that live sync files to its devices, GoodSync for WD and WD Sync, but the latter is no longer available to download, and GoodSync doesn’t recognise the My Passport as a Western Digital device.

Almost all the NVMe-based external drives I’ve tested hit the bandwidth limits of USB 3.1 Gen 2 at roughly the same point, around 1,000Mb/s. When USB 4.0 arrives with the possibility of double the bandwidth, we will see quicker drives. Currently, this drive is a fast as one can go without using a Thunderbolt 3 interface.

Initially, I tested the drive on a Gen 1 port for thoroughness, and it returned precisely the numbers expected. Typical speeds around 400-450Mb/s for both reading and writing, with a slight bias to writing hinting that more of the SSD cache is focused on that pathway than the reading route. 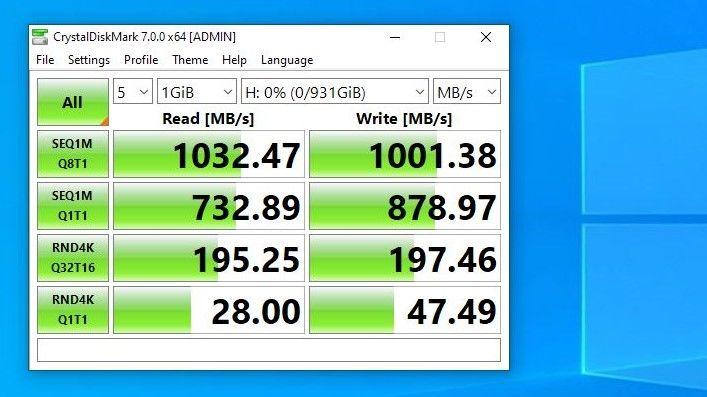 Testing with a Gen 2 port displayed the headline performance that I expected, with 1,032MB/s reads, and 1,001MB/s writes using the default profiles of CrystalDiskMark 7.

A few benchmarks went marginally faster than that, but this is remarkably close to the theoretical limit of a USB 3.2 Gen 2’s 10Mbits, and I’ve not seen anything faster on USB.

Overall, the performance of the My Passport SSD is practically identical to the Crucial X8 and slightly faster than the SanDisk Extreme Pro and Adata SE760.

Initially, the new My Passport SSD will only come in the grey colour and 512GB and 1TB options, but the 2TB version and more colours will follow shortly.

The decision to revamp the My Passport SSD was overdue since many brands that offer portable storage have released an NVMe technology external drive over the past year.

A few brands are determined to squeeze the last from SATA SSDs. But, with USB 4.0 on the horizon, it won’t be long before even faster external drives are available.

While not as elegant as its predecessor, the new My Passport SSD delivers good-enough performance combined with excellent transportability and an effective hardware-based security model. The problem for Western Digital is pricing, as comparable designs, like the Crucial X8 and Adata SE760 can be found cheaper.

The wonky pricing, software that isn’t currently functional, the lack of alternative colours, and the missing 2TB capacity at launch all hint that Western Digital rushed into releasing this product.

Hopefully, it will address all of these things in due course, and the new My Passport SSD will be as popular as the countless others that came before it.