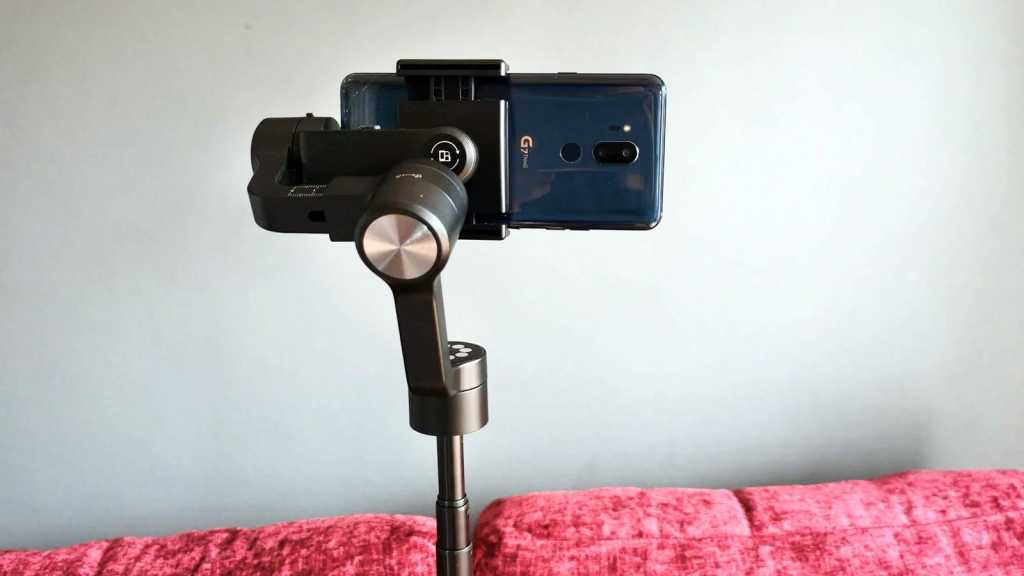 A good-value gimbal which offers proper three-axis stabilisation and the bonus of a telescopic selfie stick for easier filming.

Joby is a name that most people will associate with Gorillapods, those camera tripods with flexible, magnetic legs that you usually see wrapped around tree branches.

Well, now the company offers a 3-axis stabiliser to compete with DJI’s Osmo Mobile. And at a low price of £89.99/$99.99 and with selfie-stick capabilities, there are two reasons why you might be tempted away from what we consider to be the benchmark in phone stabilisers.

For the uninitiated, a stabiliser clamps your phone and uses three motors to stabilise movement on three axes (roll, pan, tilt) which leads to very smooth-looking video even if you happen to be running, jumping or walking while filming.

The only movement a stabiliser can’t remove is the up-and-down motion of your arm which happens when running or walking, but learn to keep your arm as steady as possible and you can even lessen that effect.

What you get in the box is the stabiliser, USB-C, microUSB and Lightning cables for connecting your phone (to charge it), a mini tripod which screws to the bottom and a zip-up carry case.

Like a selfie stick, there’s a built-in telescopic section between the handle and the gimbal which extends to 18cm / 7in. This lets you get more of you and your surroundings into the frame when shooting with your phone’s selfie camera than if you were using an Osmo or any other stabiliser which is limited by the length of your arm and the angle of view offered by your phone’s camera.

The phone clamp rotates by 90 degrees so you can shoot in portrait as well as landscape.

In other respects, the Smart Stabilizer is a lot like the Osmo Mobile, only it doesn’t fold up so is bulkier to transport. There’s a multi-purpose trigger on the back, a joystick on the front for manually moving the angle of the camera, a shutter button (press and hold it to start a video instead of taking a photo), on/off button and a zoom slider to the side.

Joby says the built-in battery lasts up to 10 hours, which should be enough for plenty of Tik Toks and YouTube videos.

Build quality is fine for the price: it’s all plastic but in black it looks as well as feels sturdy enough. The phone clamp will accept devices up to 84mm wide and up to 210g. That rules out some of the larger phones such as the iPhone 11 Pro Max, though some user reviews online suggest that the Smart Stabilizer can cope with Apple’s heaviest current model.

In use, the Joby works as you’d expect, holding your phone pointing straight even as you move the grip. Holding the trigger locks the panning arm, so you can move the phone side to side and even if you rotate the grip, it will always face dead ahead – useful for handheld slider shots.

You can also lock tilt, which prevents the camera from pointing up or down as you move the grip and, as long as you’re not holding the trigger, it can still turn left and right (pan).

While you can use your phone’s default camera app, you can download the Smart Stabilizer app to get more control. The app is by Feiyu, who probably manufacturers the gimbal for Joby since it sells them under its own brand.

Typically, we’ve found that it’s the app that lets the side down for gimbals and that’s pretty much the case here. While it’s far from the worst we’ve seen, it’s not nearly as good as DJI’s.

For one thing, the face tracking isn’t great. It behaves like a very early version of DJI’s. If you keep the person’s face in the frame it works, but move too quickly or go out of the frame for more than a fraction of a second and it loses track of it and you have to restart the tracking.

One positive thing was that the app had no issues at all reconnecting to the gimbal after the initial Bluetooth pairing, which all happened automatically.

It’s also handy that the user manual for the gimbal is available in the app. You might well need it as some of the buttons have up to five functions depending on how many times you press them: confusing at first and something you plain forget if you don’t use the gadget regularly.

Aside from face tracking the app lets you take some creative shots such as dolly zoom, light trails, slo mo and timelapse. There are also settings including adjustment for horizontal and vertical calibration so you can manually fix any issues with the horizon not being level.

Interestingly, though you can set how long the gimbal takes to turn around a complete circle, you can use button combinations to set custom start and end positions for what Joby calls ‘motion control mode’ so whereas with the Osmo you can only use that function with DJI’s app, with the Joby you can use you phone’s default camera app and choose which lens is used and what resolution and frame rate. And it doesn’t have to be a timelapse, either.

That costs £139/$149, so if you can live without better face tracking, longer battery life and DJI’s better app, the Joby Smart Stabilizer will save you £50/$50 and – of course – you’ll get that useful selfie stick function as well.

It isn’t as user friendly as DJI’s OM 4 – you’ll be referring to the manual a lot to get to grips with how the various modes and functions work – but if you shoot videos of yourself for Tik Tok, Instagram, YouTube and other platforms, the Joby Smart Stabilizer does a good job at a good price.